A Look at Video Game Ads of the Past: SNES

Hello and welcome back to another round of classic gaming ads from the past. If you missed my entries on Atari, NES, and Sega ads, check them out for a look at how retro video games were advertised in comic books of the 80s and 90s. As always, all of the ads featured here were taken directly by me from my collection of comic books and magazines of the early to mid 90s. In addition to some great ads for games, I am also including ads for contests, reward programs, and store ads that relate to the SNES. Before we begin, I’m excited to say I finally figured out how to join my two-page spreads into single images, which should really help with readability for those ads. I’m a little mad at myself for not figuring it out until now, but they should look much better from here on out. 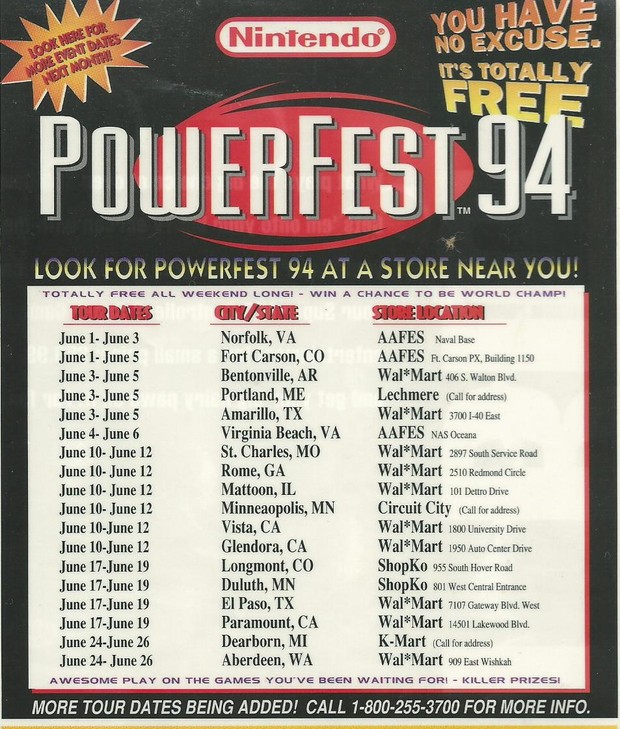 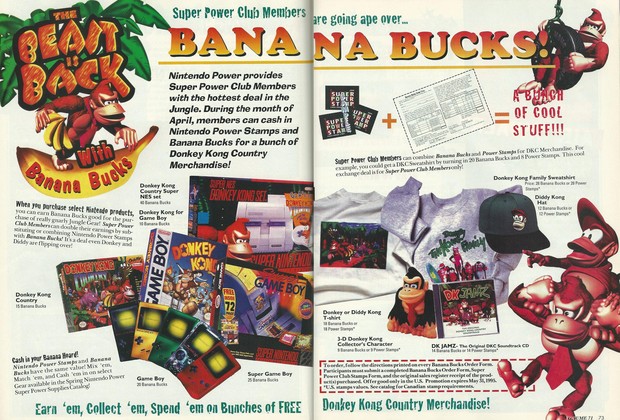 This is an in-house ad from Nintendo Power around the time that Donkey Kong Country was released. It's always interesting looking back at some of the merchandise offered in magazines, especially CD's and dated 90's clothing. It's too bad stuff like this is always so expensive when you see it online. 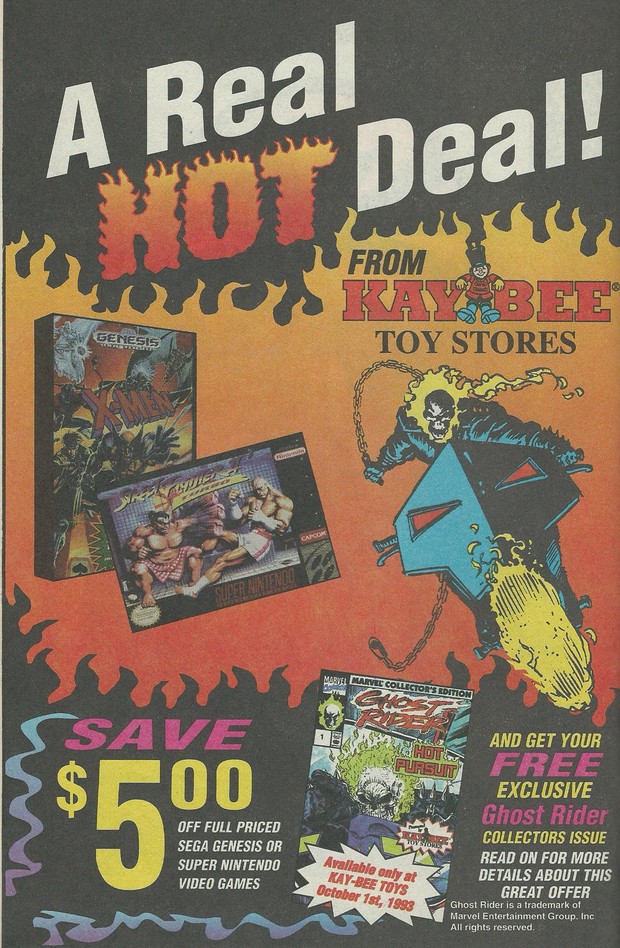 Can't go wrong with either of those choices. Knowing early 90's comics, I'm sure that issue of Ghost Rider is still a valuable collector's piece. 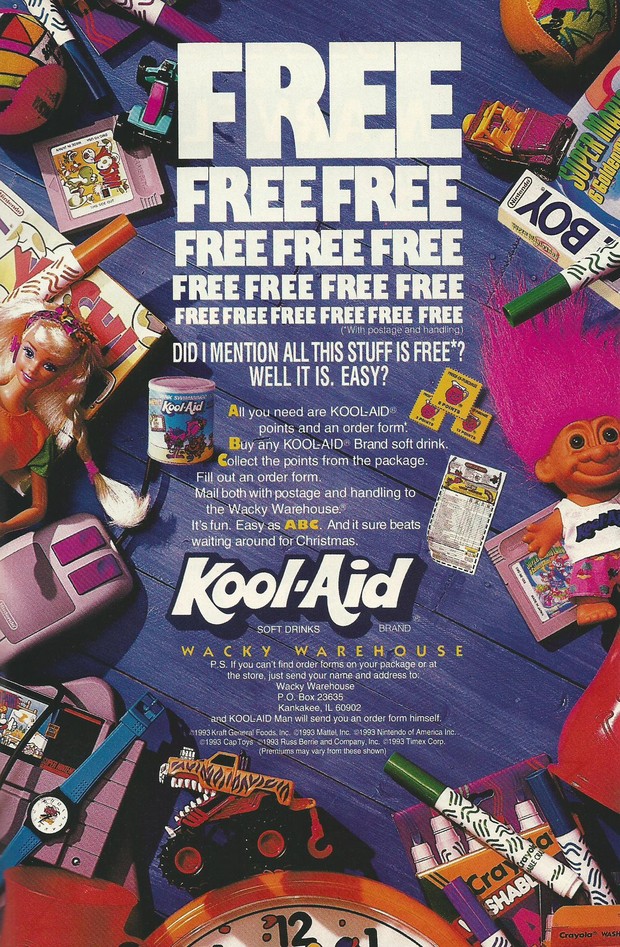 This ad could have fit in a number of entries, but I decided to save it for this one. Among many other things, there's a copy of Mario Paint at the bottom, so that's good enough for me. These programs always seemed cool to me as a kid. You mean I can get all this cool stuff just by drinking Kool-Aid? Sign me up! 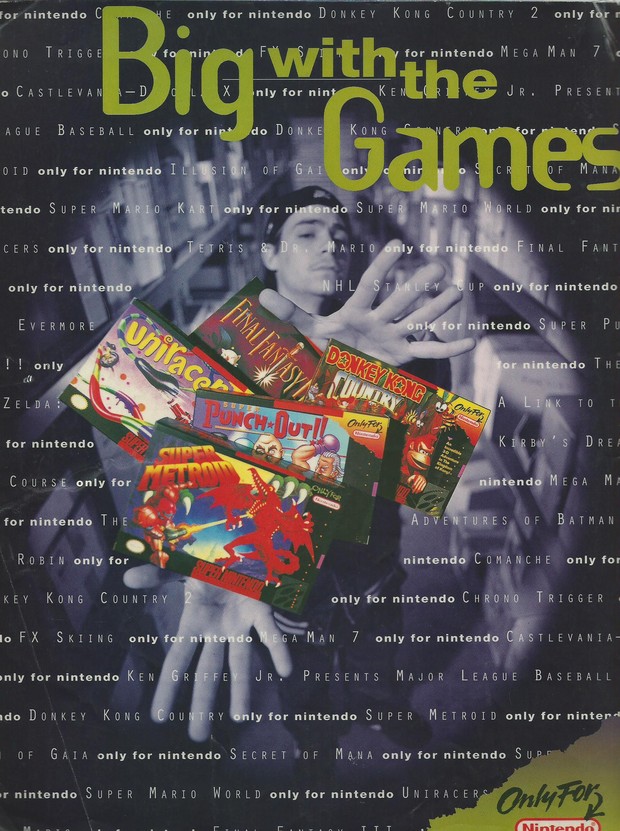 You can't go wrong with a selection like that. Even though this ad is simple in design, it succeeds because it lets the games do the talking, making sure you know which system has the coolest games. 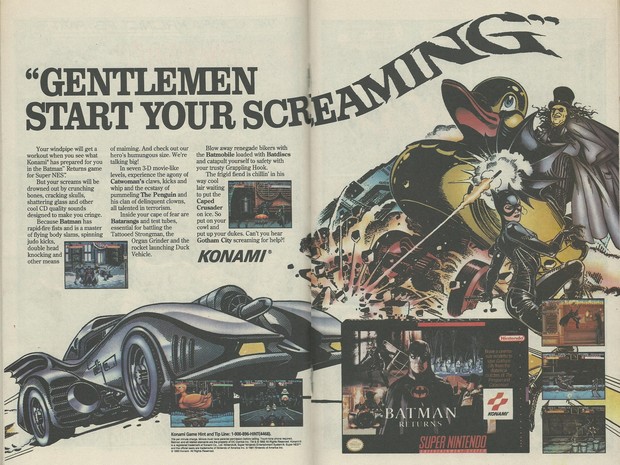 I haven't seen the movie or played the game, but this ad uses the comic art style well and offers an intriguing description of the game. 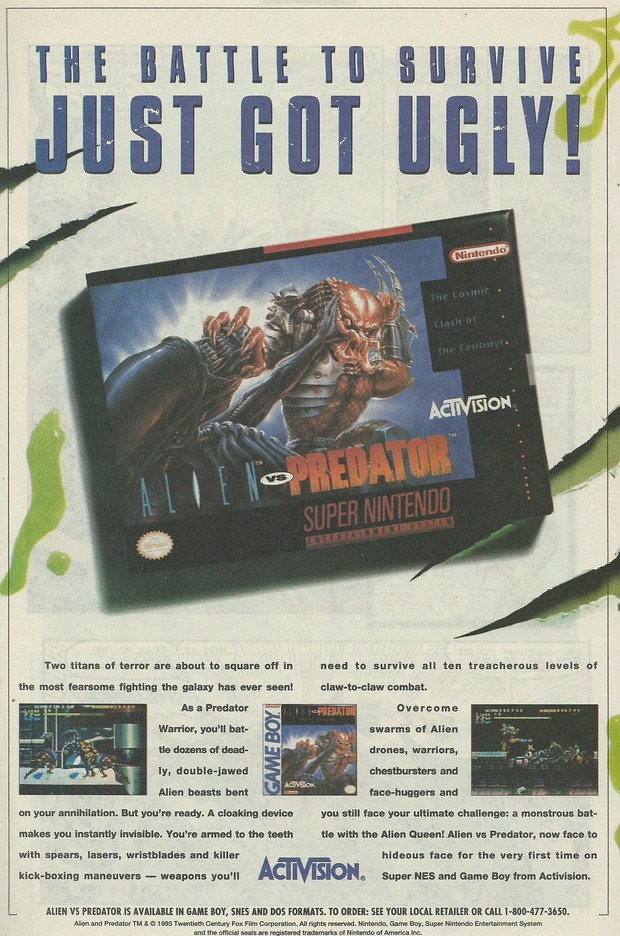 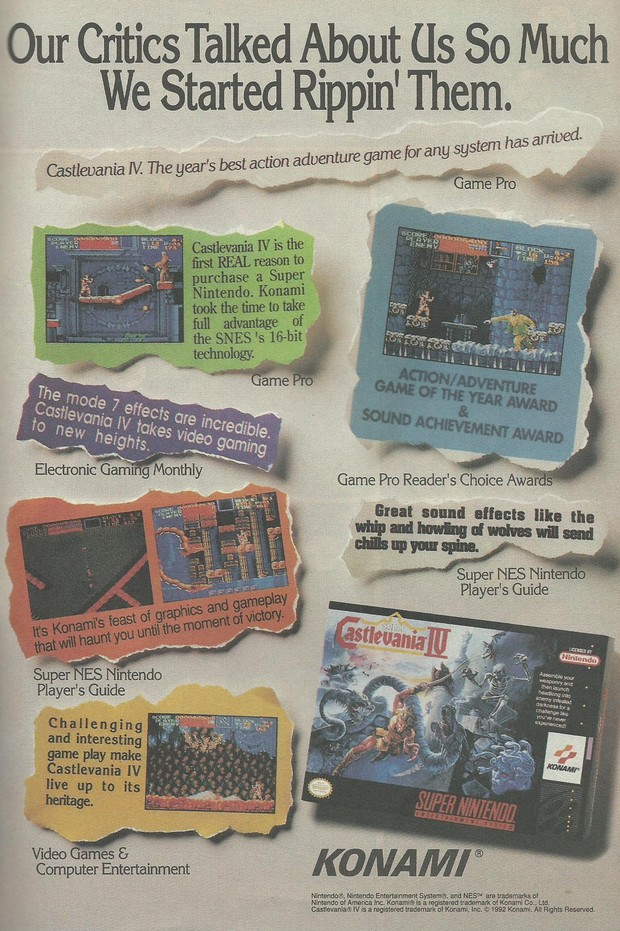 I actually think this ad is a bit disappointing, compared to ads for previous Castlevania games. While the older ads were creepy and atmospheric, this one is simply a list of accolades. With the creativity found in previous ads, this one could have been better. 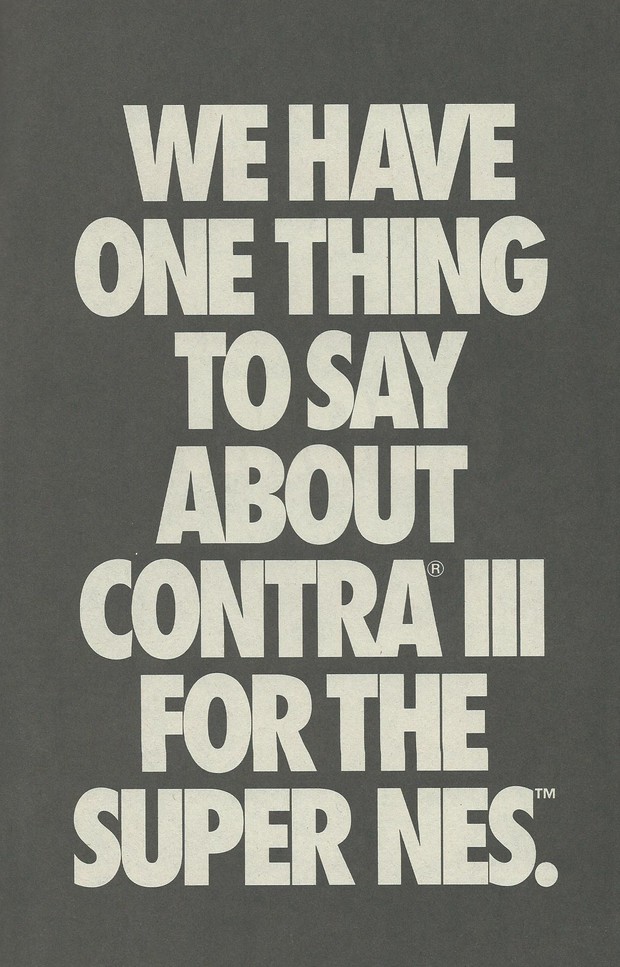 Part one of a three page ad for Contra III. Though simple, it offers enough to make you want to flip the page and find out more. 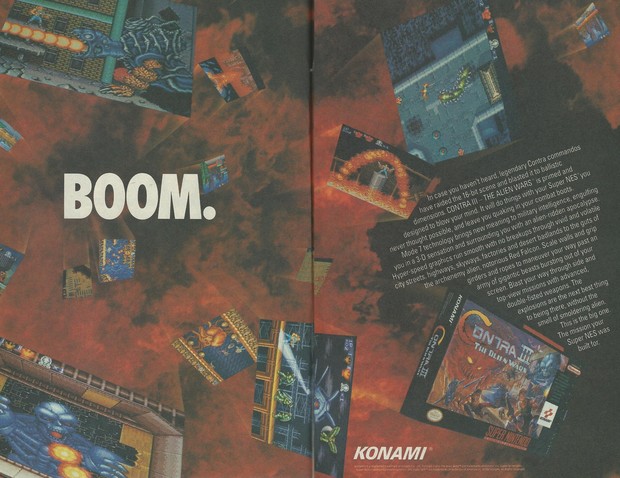 This is one of my favorite ads so far in terms of visual design. Creating a collage-like explosion made up of game screens is a neat idea, and successfully advertises the high-octane action awaiting the player. 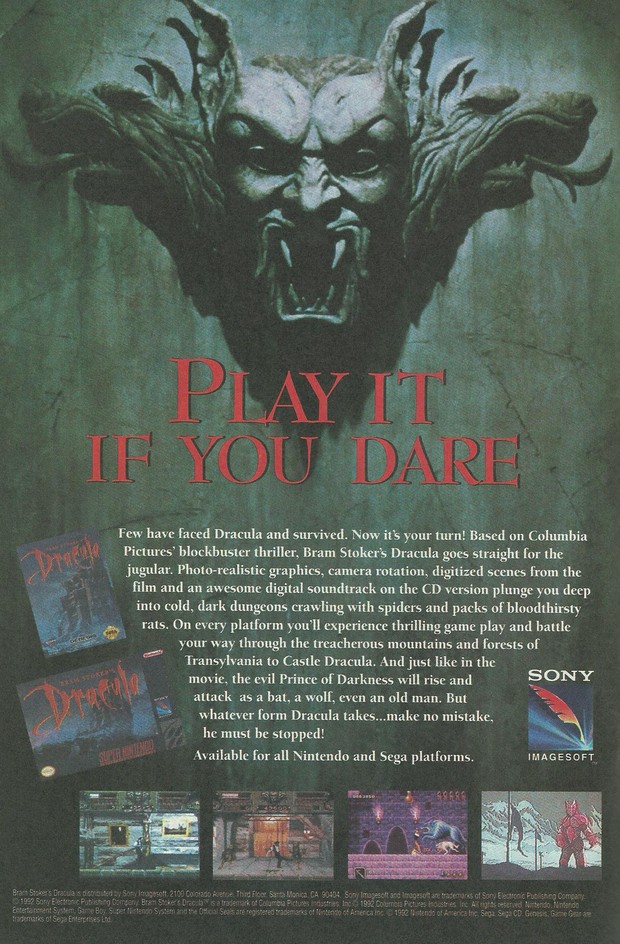 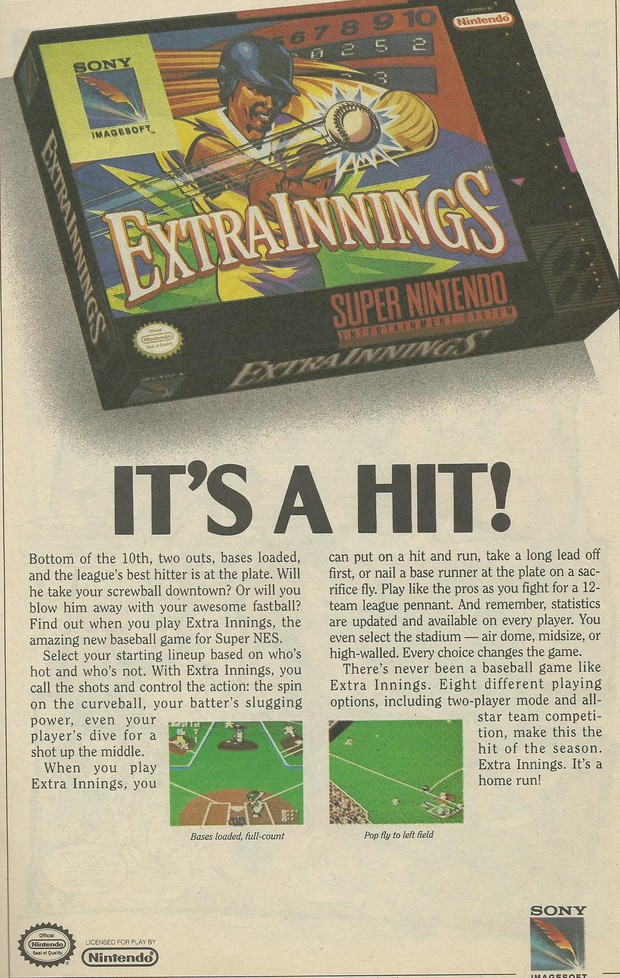 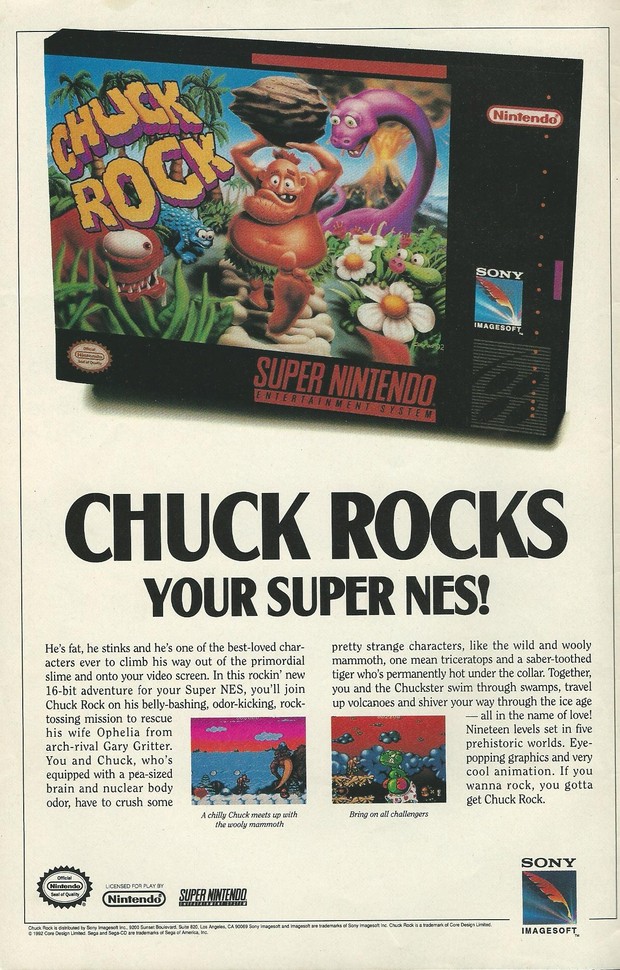 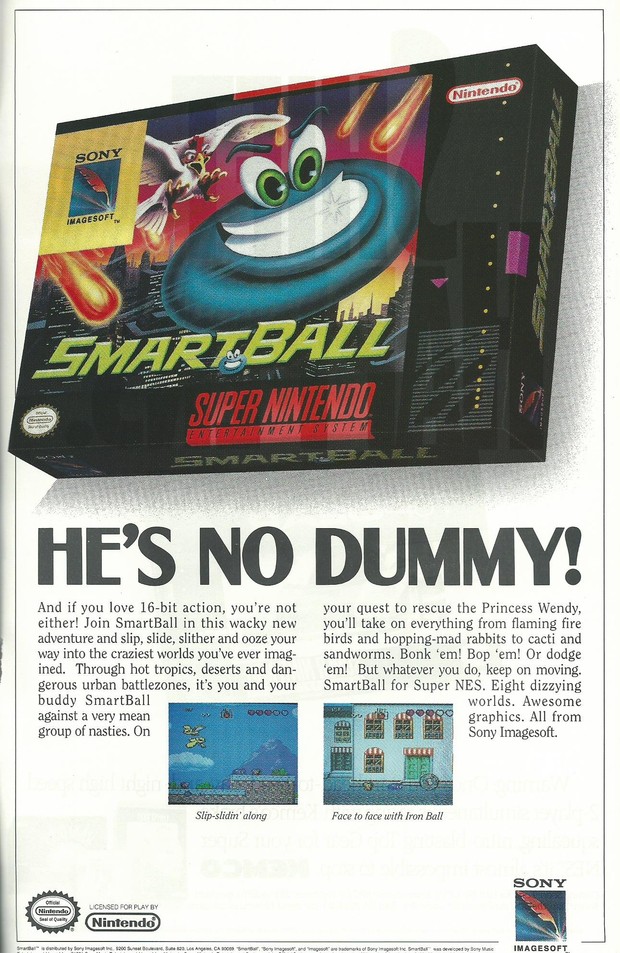 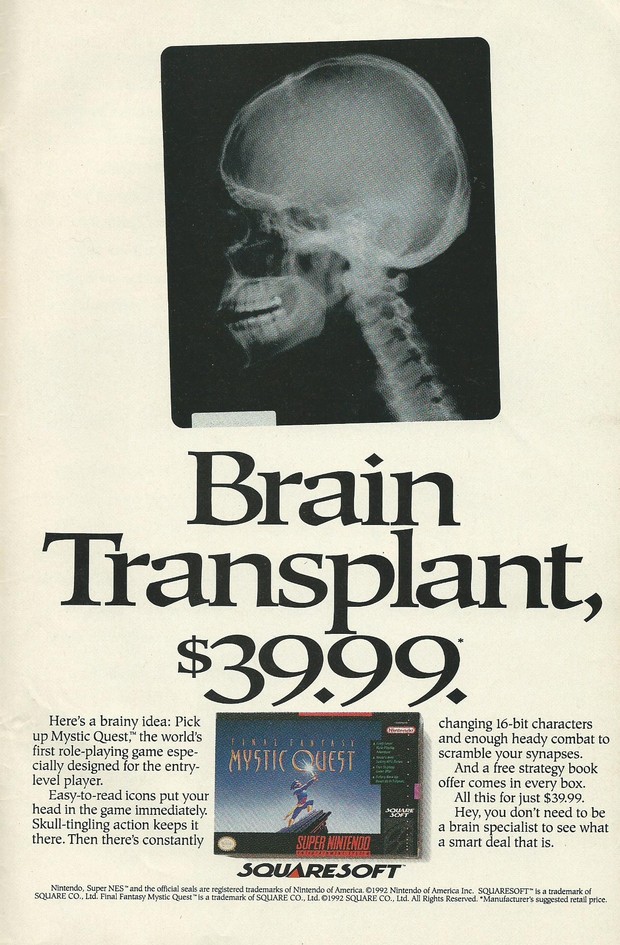 I know they made Mystic Quest to be for the beginning RPG player, but this seems a bit insulting. "Constantly changing 16-bit characters?" What does that mean? A rotating party? A bunch of NPC's? Characters that level up? 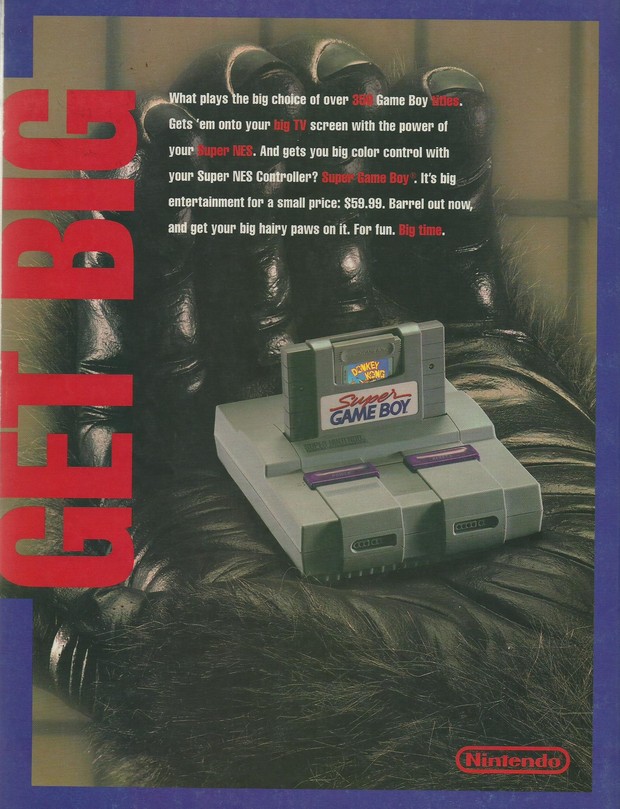 Not exactly for a game, but a good ad for a cool accessory. 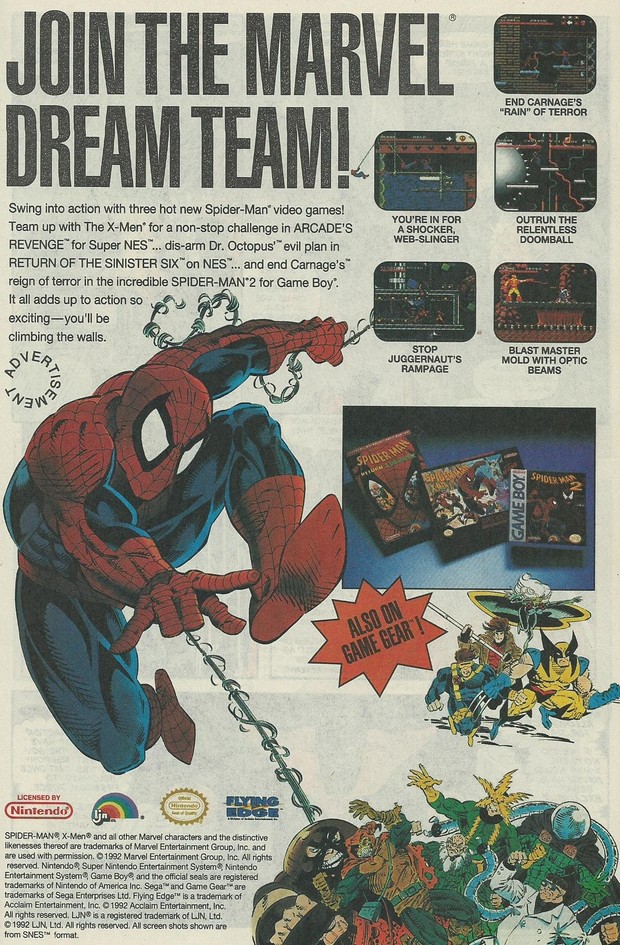 Can't get much better than early 90's Marvel. 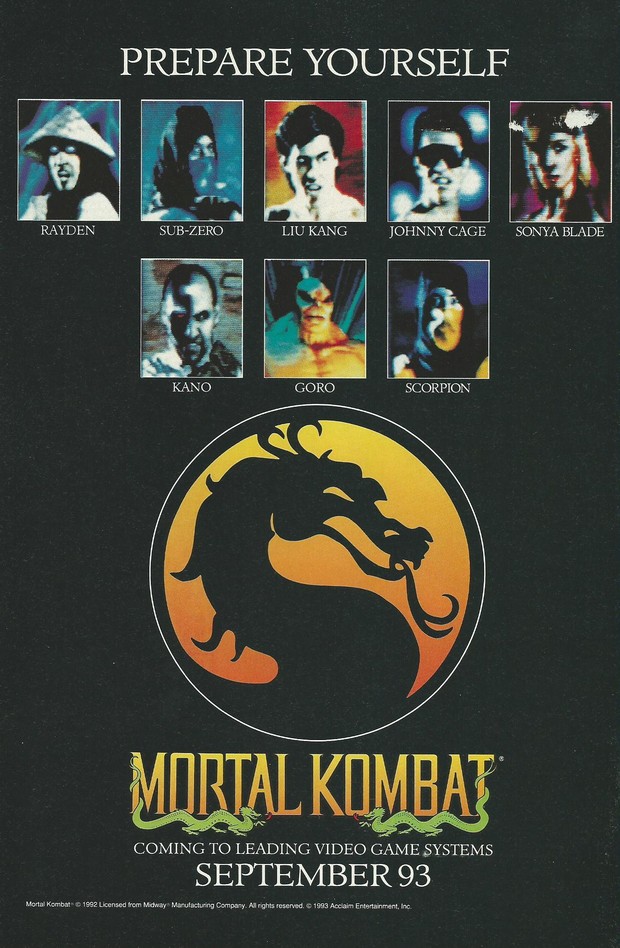 This is the first of four ads I found for the home console release of Mortal Kombat. In all the ads I've come across, I don't think I've seen that many for just one game. To say it was a big game is a huge understatement. 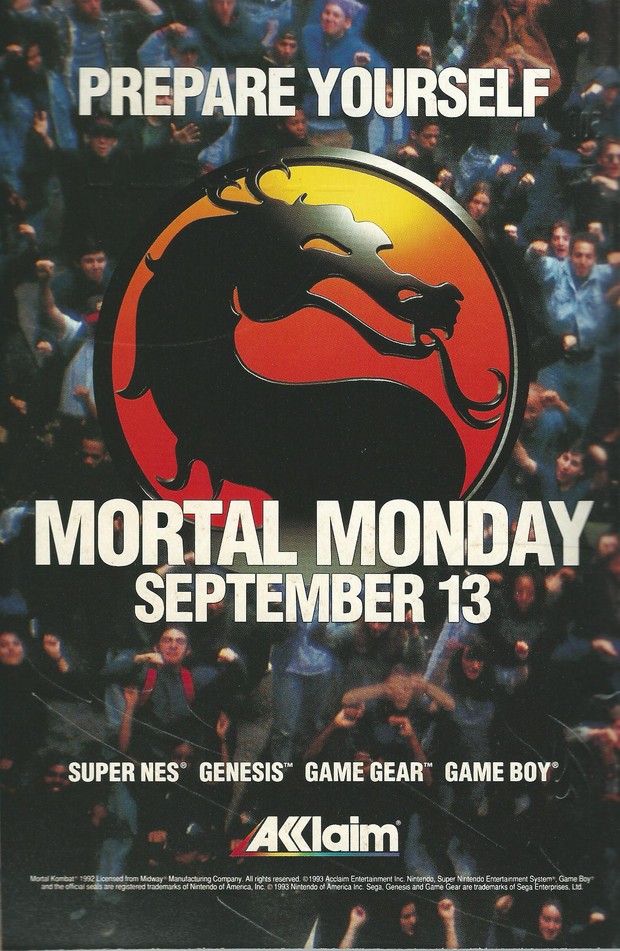 The ads even hyped the game's exact release date, which I didn't find much of in other game ads of the time, other than a generic "coming soon." 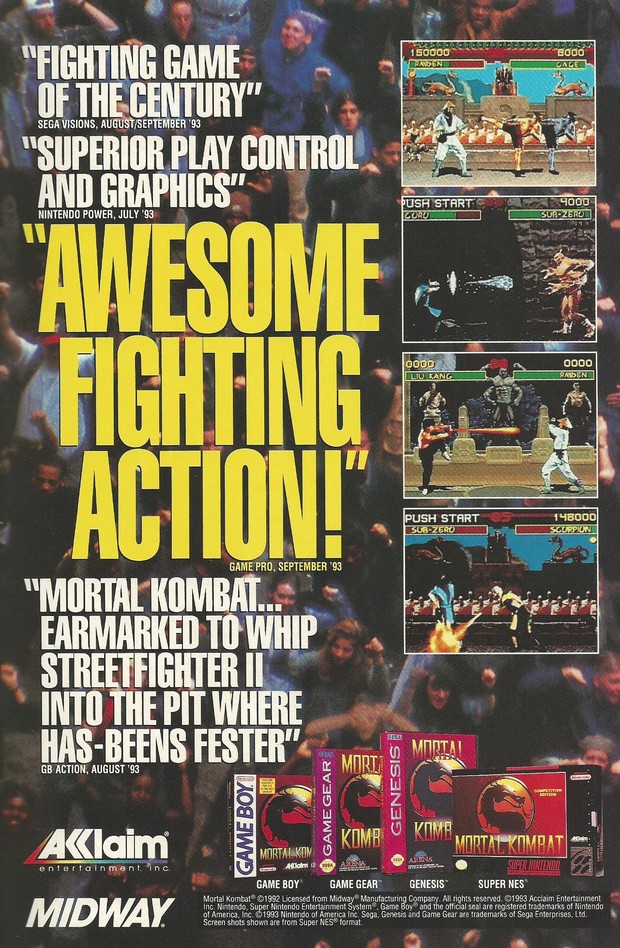 It's here! This ad uses the same background as the previous, but includes a list of accolades to mark the game's release. 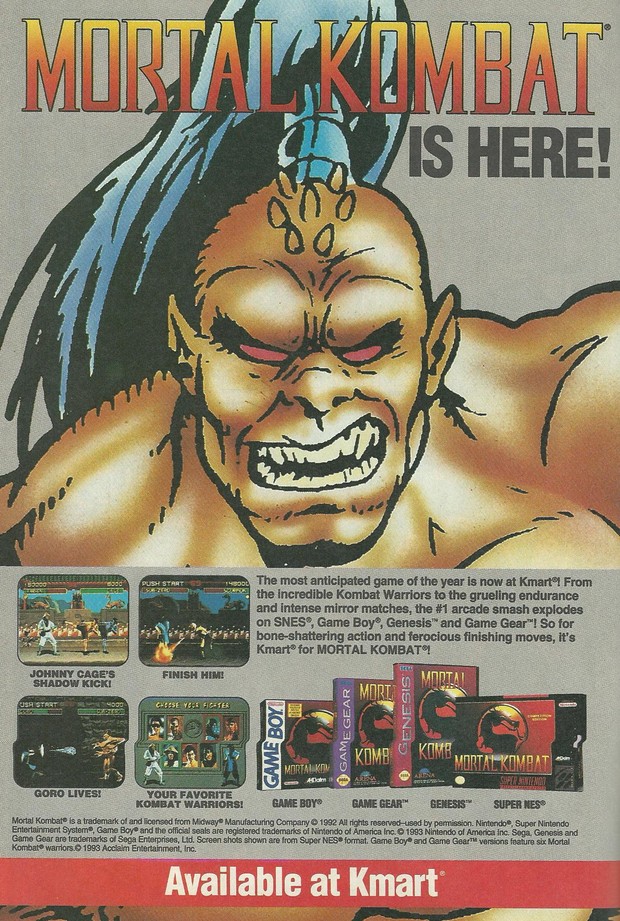 The last Mortal Kombat ad I found, letting you know that you can pick up the game at Kmart. 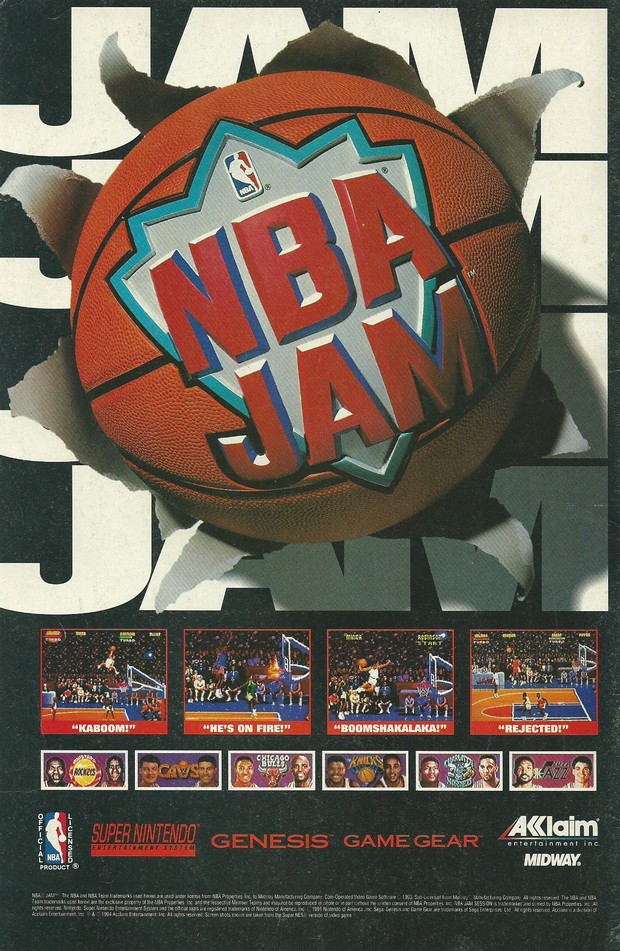 Come on and slam, and welcome to the jam! 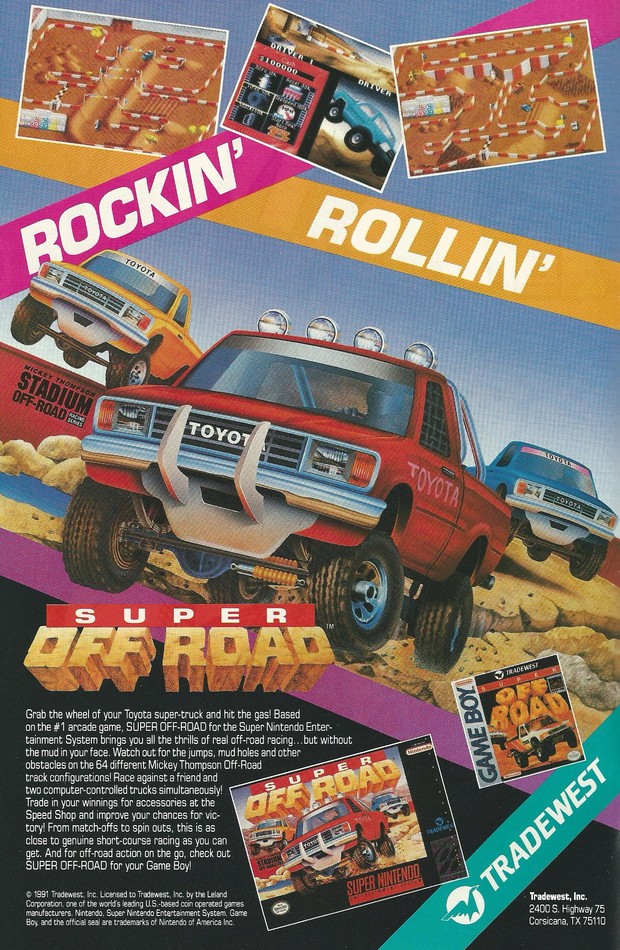 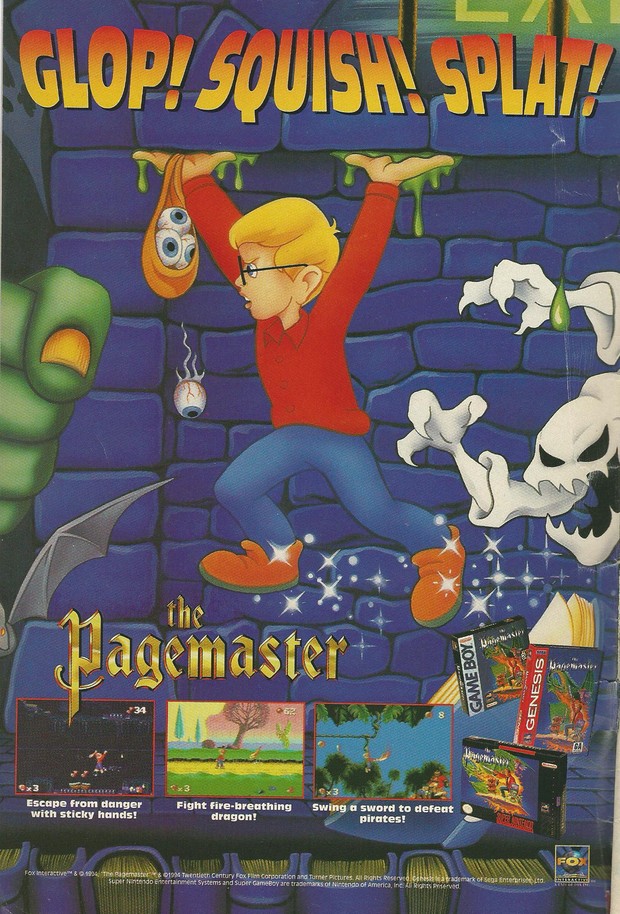 I watched the movie more times than I can count as a kid. On the VHS tape for the movie, I remember there was a taped ad for this game after the credits. I still have yet to play the game, but I have a feeling it was probably a standard movie tie-in. 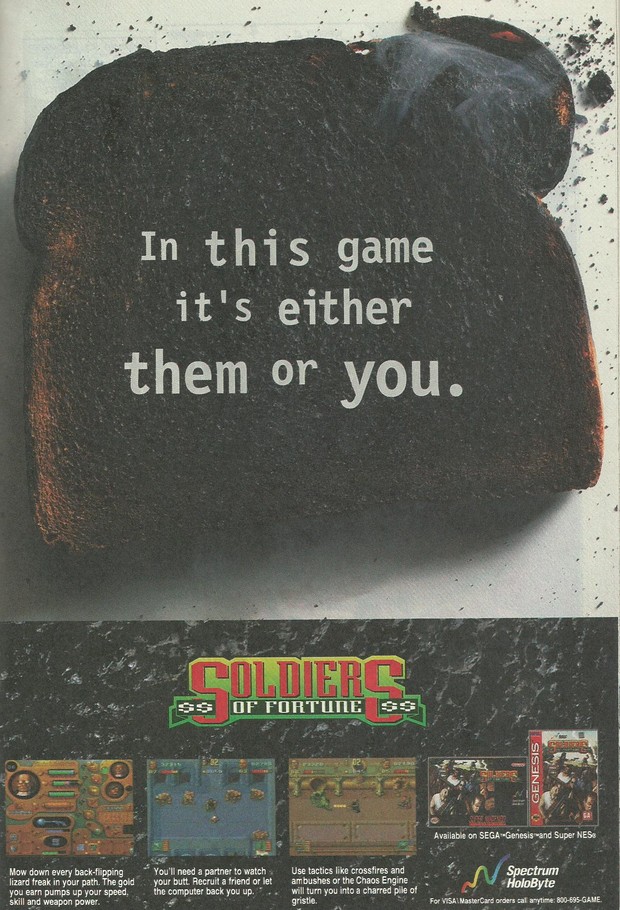 I have never heard of this one, but the ad looks interesting enough. It took me longer than I would have liked to realize that the bread means "you're toast." 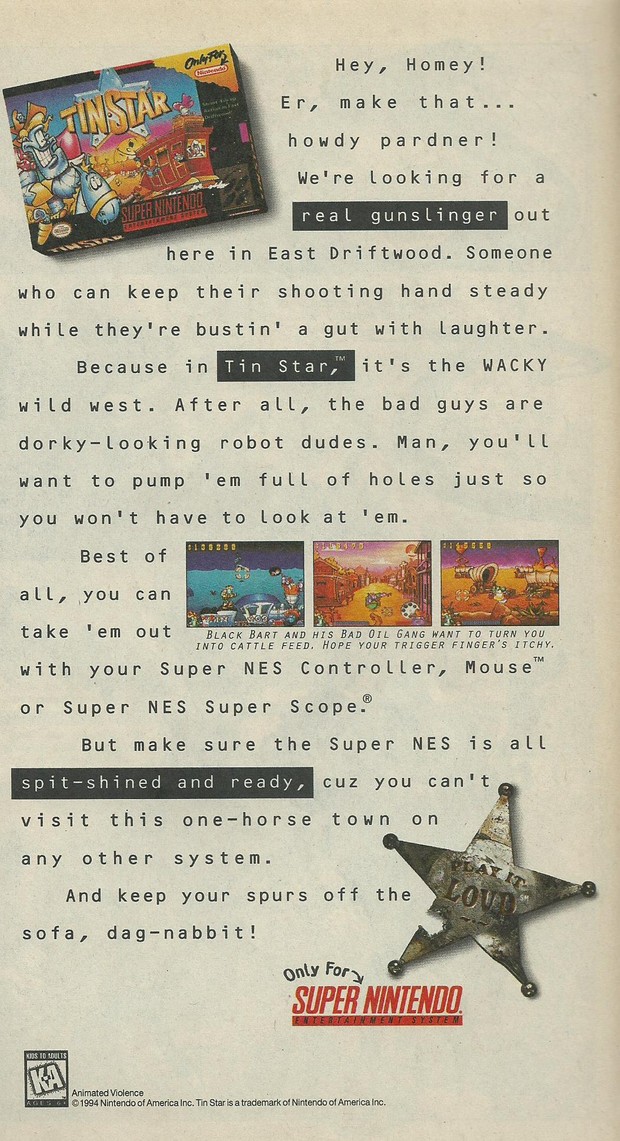 The first page of another three page ad. Without looking ahead, can you tell which game this ad is hyping? 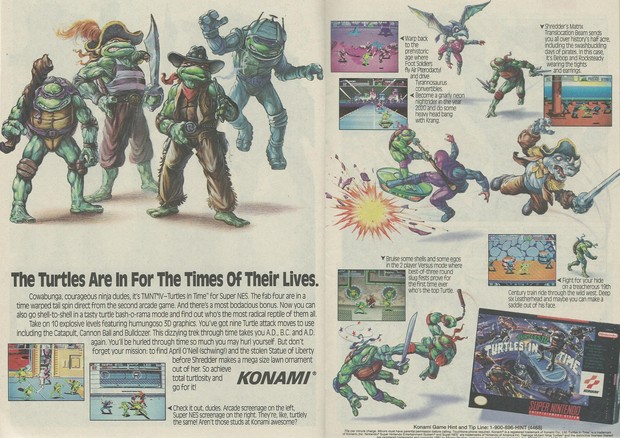 Yup, it's Turtles in Time, a game I have heard a ton of great things about, but have yet to play. All in all, this is a great ad with cool artwork and plenty of good descriptions for a time traveling adventure. 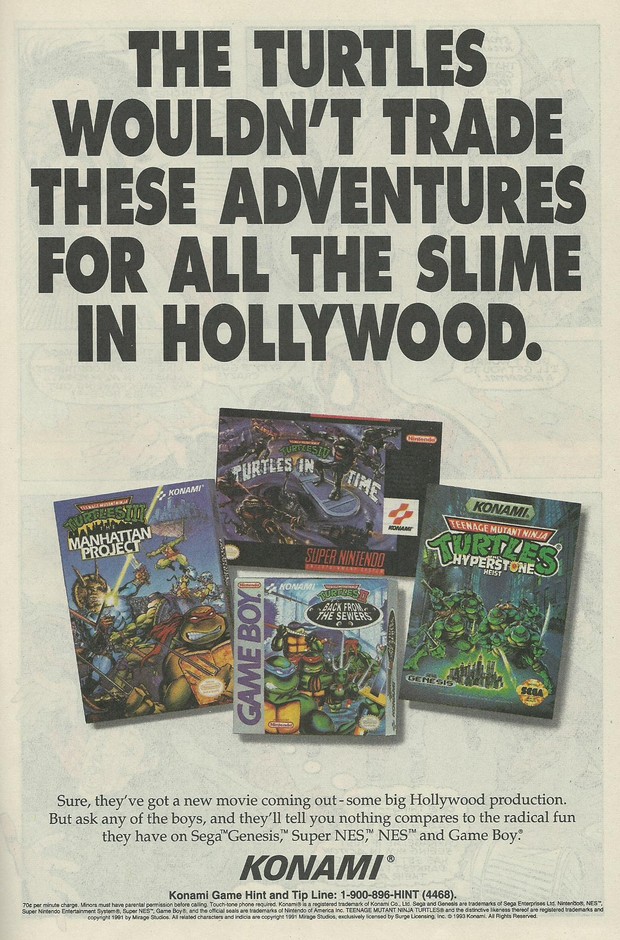 Is this ad simultaneously hyping its games and putting down its own movie? 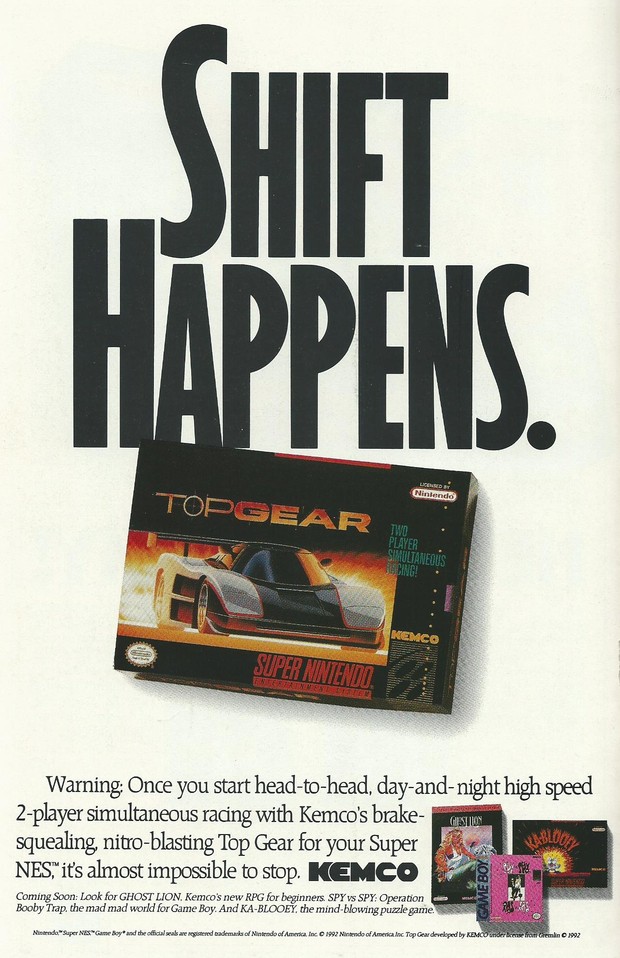 I'm surprised this actually made it into a comic for kids, but it's funny, looking back. 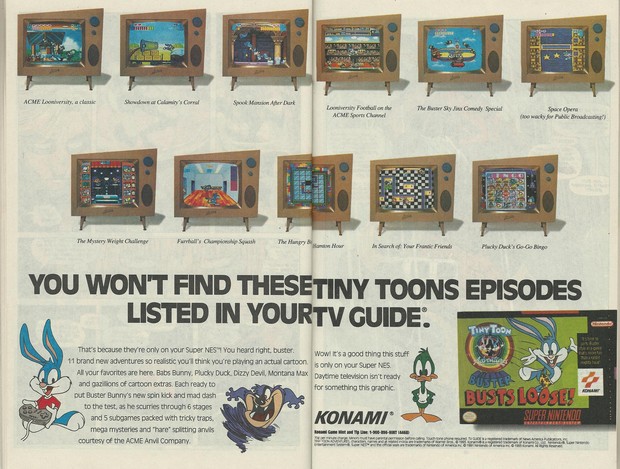 Come and join the fun!