I haven't written anything in a while.  I recently started writing a crazy long blog about theoretical physics and Metroid Prime, which I still hope to finish.  But, for now, I wanted to do something easy to jog my creativity.  So, for today I'm just going to tell you about my video game collecting habits and show y'all what games I have.

I take a "controlled burn" approach to video game collecting.  Generally speaking, at the end of each generation (or whenever I feel like upgrading), I sell all of my old games and hardware and update to the new models.  I adopted this practice when I was younger and didn't have nearly as much disposable income.  Selling off old stuff was a good way to make money for new stuff.  Also, when I was younger, I played almost exclusively on Nintendo consoles, so I was operating on the (sometimes false) assumption that there would inevitably be a new Mario, Mario Kart, Zelda, Donkey Kong, etc. to replace the one I'd sold.

Although I'm bringing home enough bacon these days that I don't need to sell my old games to get cash for new ones, there's something in the experience of letting go of all my old things every so often that I find valuable.  It's hard to explain, maybe it'll merit it's own blog post someday.  Practically speaking, I've found that I rarely (if ever) go back and play games from previous generations; even beloved rerelases on the Virtual Console or PSN that I've downloaded just sort of sit there waiting to be played.  If I am ever feeling nostalgic about a particular game, I find that I'm often satisfied by looking it up on YouTube.

But, enough about the old stuff.  We're a little over the year into the 8th generation and I'm starting to build my collection up.  Looking through my games has also made me realize how big my backlog is already getting, so along with each console, I'll be listing what I consider to be my biggest backlog crime. 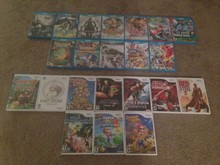 The Wii U was my first 8th Gen console, and thus far, houses my largest collection.  I started getting overwhelmed with new releases toward the end of last year and so I haven't picked up Smash Bros. or Captain Toad yet--those are the only two physical releases that I'm really looking for to complete my collection (I don't know when that'll be though, since I'm trying to pace myself with new releases right now).  I'm (flameshield) not a huge fan of the Wind Waker, so I don't consider the HD Remake an essential part of my collection.  I own it digitally because--Whoa!  Wait a minute!  Looking at that photo right now, I just realized that my friend never returned Pikmin 3 to me, which I also own, but is obviously not featured (will have to get that back)--Nintendo gave it to me for free when I got Mario Kart.  Similarly, I love that green case that New Super Luigi U comes in, but bought it digitally because it was cheaper.  For both of them, I'd be willing to pick up a physical copy for a couple bucks though, just to make things look nice.  I used to own Zombi U and Monster Hunter 3, but I couldn't get into them, so I sold them.  I might sell Darksiders 2 next, since I also couldn't get into that.

You'll also notice a number of Wii games in my collection.  I bought most of these in early 2013 when the Wii U was my only video game console due to circumstances outside my control.  At this point, I'm not quite sure what to do with them.  I only played through Metroid Prime 3 and Donkey Kong completely.  I'd feel bad selling the rest, having barely touched most of them.  But, as the 8th gen has started picking up, I just haven't found myself motivated to go back to these guys.  Some of them are getting pretty rare (I think), so maybe I'll hold onto them just a bit a longer and see if I can't get something nice for them.

Favorite Game:  Super Mario 3D World--it's brilliant, I can't rave enough about this game.  Nintendo has perfected the platformer, and this game is proof.  I also highly recommend Donkey Kong Country Tropical Freeze because it's another really solid platformer that is grossly undersold and underappreciated.

Biggest Backlog Crime:  Only playing The Wonderful 101 for an hour... when I first bought it...  I feel really bad.  On the other hand, I did beat Bayonetta 2 last night.

Next Addition:  Likely going to be Splatoon.  I'm trying to scale back for a bit and only pick up one new game per month, which means that Smash and the Toad are probably going to get pushed back until Summer absent some awesome sale... along with Kirby... and Mario Party... and all the other great stuff Nintendo is putting out, dammit. 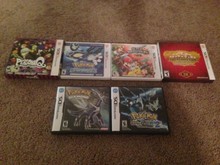 My 3DS collection looks weaker than it is.  I had this crazy idea that I'd try going all digital on a console and see how much I liked it.  Well, as you can see, I've started picking up physical copies of games.  Seeing as how the 3DS has been out for a while, there's a good number of oldies that I've still got to pick up (like the apparently discontinued Ocarina of Time 3D).  There's also a number of games I bought digitally that I wouldn't mind paying a decent amount for physical copies of, like Shin Megami Tensei IV or Bravely Default.  I picked up a couple old Pokemon DS games, since I was really getting that itch to catch 'em all before X and Y came out.  Having played X and Alpha Sapphire (and expecting Z or something to be announced for this Fall), I have two half-finished Pokemon games chilling on my shelf with no real desire to finish them.  Will I catch 'em all?  Perhaps, some day.

Biggest Backlog Crime:  Not having finished Shin Megami Tensei IV.  I am making good progress in Persona Q though.

Next Addition:  Counting the days until Majora's Mask 3D comes out. 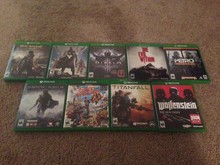 I bought the X1 before the PS4 because I thought it would have better exclusives in 2014.  Turns out that it didn't matter because I spent more time on multi-plat games anyway.  The only console exclusive that I'm still missing is the Master Chief Collection, which I'm kinda glad I waited on because it sounds like it's a mess.  Other than that, there are a few multi-plat games I still need to get--GTA V, Advanced Warfare (when it's cheap enough to justify buying just for the single player)--that I'll probably get for X1 because I like the controller better and I can add more hard drive space (which is quickly filling up on both X1 and PS4).  Probably going to sell Titanfall and Destiny in the near future.  I took a chance on both of them, since they're not my usual thing.  I even bought the X1 exclusively with Titanfall so that I would be forced to play it (but, then promptly ended up spending more time playing Guacamelee!, which they gave me for free).  But, I honestly don't see myself ever going back to either.

Favorite Game:  Shadow of Morder--playing other open-world games after this one makes me realize how much of an advancement it really was.

Biggest Backlog Crime:  Playing Sunset Overdrive for only a couple hours one afternoon, when I had bought the damn console for Microsoft exclusives.  I did like what I played of it though.

Next Addition:  Not sure yet, I plan to use my X1 primarily for multi-plats at least until Sony lets me add more hard drive space, so probably Batman:  Arkham Knight (if it sticks to its June release date). 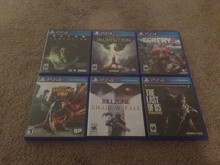 The last 8th gen console I purchased (and primarily because my friend who works at a pawn shop hooked me up with one for cheap).  My first game for the console was Alien Isolation, and I'm glad I got it on PS4 because the controller lights up and makes all sorts of cool noises.  I got Dragon Age and Far Cry 4 it on the same day in November--I've spent quite a bit of time in Dragon Age, not so much in Far Cry.  The three exclusives--Infamous, Killzone, and The Last of Us--I picked up for cheap on sale a couple weeks ago (all three for $75).  I haven't been wow'ed yet by the PS4, but I'm optimistic about it's future (Peeeeerrrrssoooonnnaaaa).

Favorite Game:  Infamous--for lack of anything else really, it's easily my least favorite of the series, but I haven't give a fair chance to half of my PS4 games yet.

Biggest Backlog Crime:  Not having played The Last of Us yet.  It came in the mail a week a half ago, I'm getting to it. 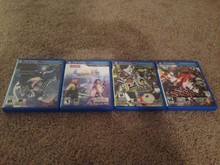 The classic underachiever.  So much wasted potential.  I gave this sad pup a chance even after it'd been knocked out of the ring by the 3DS and support was seriously dropping, so I can't blame anyone but myself for owning it.  Some nights, I make a stiff drink, play Persona 4, and imagine what could've been.

Favorite Game:  Persona 4, d'uh.  But, a game that's not featured and I feel deserves mentioning is Ys:  Memories of Celceta.  I borrowed that from a friend and played all the way through it.  I totally enjoyed it, and if you're looking for something to play on Vita, it's an Action RPG worth your attention.

Oh, wow, you've made it to the end!  I didn't think anyone would do that.  One day, maybe months or even years from now, I'll post another update on my collection.  Hopefully, I'll post a blog about something else between now and then.  Thanks for reading!