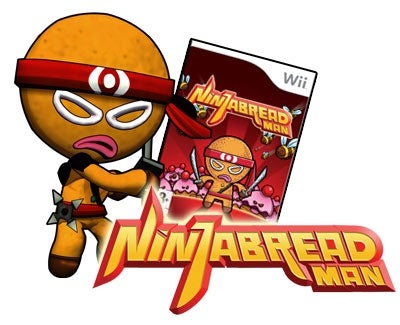 The introduction of the original Wii was particularily exciting for our industry. Though it may be difficult to remember, there was a time when each new release for the platform was seen as an opporunity to make good on Nintendo's promise of truly changing the way we play games. Instead, publishers were frantically releasing anything and everything they could get their hands on as to quickly cash-in on the rapidly fading motion controller phenomenon. Perhaps no single title is more infamous for ushering in this era of shovelware dreck than 2007's Ninjabread Man. Far more interesting than the game itself is the story behind it and one of the more shameless development studios in modern game design.

Ninjabread Man originally began development as a modern re-imagining of the Amiga classic Zool. Data Design Interactive secured the rights and started work on a new entry in the series with a projected release of 2004/05 (see original intro cinematic above). Unfortunately for DDI, Zool's rights holders were thoroughly unimpressed with their offerings, forcing the studio to replace the Ninja of the Nth Dimension with their own original character. The design of the titular Ninja was a perfunctory but fitting design that easily meshed with Zool's world and the new game saw release in 2005 for the PS2/PC in europe and worldwide for Nintendo's Wii in 2007. For development, DDI utilized their own in-house game engine. While far from impressive, the "GODS" engine (for Game Oriented Development System) was unique in that it wasn't reliant on any single platform's machine code or development kit. As sort of a predecessor to the Unity engine it's focus was instead on ease of porting from one console to the next. However, this had the nasty side-effect of leaving games developed with GODS woefully unoptimized for any device.

Ninjabread Man is in and of itself a very derivitave work with gameplay that would be more at home on early 5th generation platforms like the Jaguar or 3DO. Character movement has more in common with the likes of Bubsy 3D than more modern platformers. In that way, I found a modicum of fun in the game as sort of an unintentional throwback title. It was like going back to a time before the release of Tomb Raider or Super Mario 64 cemented the basics of 3D running and jumping. I've always loved going back to the Sega Saturn or Playstation and playing older 3D platformers to see how developers grappled with camera control and 360 degree movement. But in 2007, such a lack of understanding for the genre's fundemental's is unacceptable. Control is sloppy, unrespnsive and the game lacks variety of any kind offering only a bare bones experience. Enemies are easily dispatched and combat is all around thoroughly uninspired. There are only a total of three levels (four if you count the tutorial) and the entire game can be completed in roughly 45 minutes.

Ultimately, I find the whole thing more than a little frustrating because I see so much potential here. As a $20 budget release it utterly fails, but with a little more content and polish it could have succeeded as a $5 WiiWare release. The versatility of the GODS engine could have given DDI a real edge if they used it's penchant for rapid development to allow them to focus on design and mechanics. Instead they used these short cycles to churn out below mediocre titles again and again. Infact, they released 62 different Wii games that year alone, with three of them being little more than reskins of Ninjabread Man. It was estimated in 2008 that DDI was responsible for 40% of the Wii's value software library in Europe. Now, they're relegated to being a work-for-hire studio, having since closed their headquarters in the UK. Had their mission been to make quality software instead of flooding the market with shovelware, the Wii's library as a whole may be seen differently today.

As a personal note, I'd like to state that I had vehemently avoided purchasing this game for years. It wasn't until learning about it's origins as a Zool title and finding it on sale for $2 that I changed my mind.