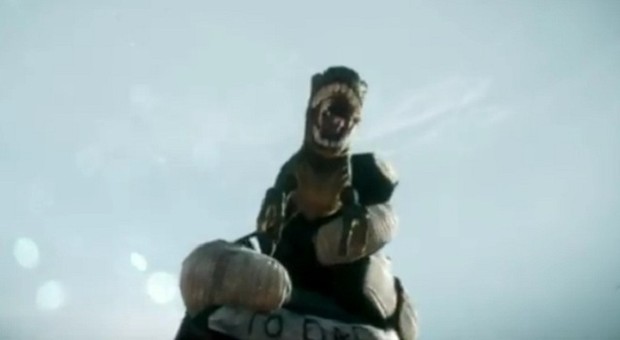 I want to stop shooting people.

When that came out, it may have been one of the strangest things I'd ever written, but it's true.  Not every videogame is violent, but it's something that permeates our hobby.  Games with guns and shooting and killing sell really well, are rated highly, and are generally a ton of fun.  Violence, in its many forms, is part of a formula that has worked for videogames almost since their inception.

I've been working on my Master's Thesis, which centers on the war poetry of Brian Turner.  Turner is an American Veteran who's spent several years in Iraq following 9/11.  As you might imagine, spending that much time overseas doing something as dangerous as serving in the armed forces can leave scars on one's soul.  And as one of Turner's critics says, "It might be blasphemous to assume that I could write with any authenticity about the war having not served myself," here I find myself trying to conceptualize what this man went through, and what his fellow soldiers went through, where two collections of poetry and a memoir don't feel like anywhere near enough to catalogue the immense heartbreak of war.

Turner, however, doesn't want his readers to focus exclusively on him, or on the American soldiers.  He breaks away from the norm by trying as hard as he can to write about the Iraqis, civilians and soldiers alike, and all victims of war, regardless of nationality.  Being an American myself, I often get the impression that I'm supposed to believe that the Middle East is the heart of darkness, and it is populated by the most evil people in the world.  This couldn't be further from the truth.  Turner wants us to remember that there are people, not monsters, on the other end of our metaphorical gun barrels.  There are people who struggle just as much with the presence of American soldiers as the soldiers struggle with being in what is considered a threatening global hot-spot.

As I spent this weekend finishing a chapter and writing about one of Turner's major poems, "Al-A'imma Bridge," I took a break and snuck away to play something and relax.  I'm not going to tell you that it's impossible to separate work and play, but I have a particularly bad habit of letting my reading follow me when I don't want it to.  So I didn't feel like playing anything with shooting- no COD, GTA, Uncharted, etc.  I didn't want to play anything that would take me back to the Middle East or anything related, so that ruled out Assassin's Creed and various strategy games.  In our collective fever for Metal Gear Rising 2, I tried playing that for a bit, but the overt themes of 21st-Century warfare and child trafficking pushed me away, regardless of how over-the-top and ridiculous they are.

And somehow I found myself turning on Okami.  I'd never actually completed it, and I bought the HD version not too far back, so what the hell.  Somewhere during the next 4 hours, I realized how much time I spent doing conceptually nothing in the game world.  I plodded slowly.  Dug holes.  Drew circles around animals.  Covered people in ink before cleaning them off with a spray of water.  I was just there enjoying the moments the game had to offer.  Sure, I could do "nothing" in other games as well- it's not uncommon for my friends and I to cruise around Los Santos, but the problem with something like GTA is that the structure of the game is always primed with violent potential.  If I play golf, the game is reminding me that the golf club can be used as a weapon, and golf carts can be stolen and taken on joyrides.  If we try to ignore the game proper, we'll get reminders that we can join a race or start a gang war.

Okami was content to let me interact with the world without destroying it.  Of course, the game features an excellent combat system and plenty of destructive brush powers, but in the same breath it lets you create just as easily.  You can complete the games in the Metal Gear Solid series without killing anyone, and that's a ridiculously impressive achievement, but here's a game that reduces vanquishing evil to its purest form: these are evil spirits and you are sealing them away.  When you move beyond combat, you find that the game actively encourages you to be good.  You can be mischievous, but ultimately your actions benefit others.  As much as I enjoyed watching the landscape, I was tempted not to leap into combat and blow things up, but to feed animals and help the villagers.

What Okami does to distinguish itself from the other games on my shelf is that the premise of the game is not necessarily "kill everything bad," but to "help everyone."  Amaterasu is already a god.  For purposes of gameplay you're underpowered at the beginning, but you're not without the ability to help people, and that's what you spend the game doing.  For the majority of my game session (which is in the earlier hours of the game just beyond Shinsu Field), I restored a forest to its splendid natural beauty, helped a mailman get back on track, set off dazzling fireworks, and helped a boy fish, find his dog, and boost his self-confidence.  I certainly fought random encounters along the way, including a boss battle, but these things always felt secondary to the big picture.  Where the Legend of Zelda series tasks you with conquering dungeons with the promise of sweet loot and saving an eventual princess/kingdom/world, Okami asks that you do these things for their own merit, and the player is rewarded with a kind of satisfaction illustrated by the waters changing from contaminated green to healthy blue, the trees showering leaves, and flowers blooming across the countryside.  For this and other actions the player is rewarded with treasure, experience, points, etc.  I can't deny that at its heart, Okami is a first-class action RPG, but few games compel me by reaction.  The experience points you get from feeding the animals is negligible at best.  But I will feed every animal I come across because that's what Amaterasu would do, and by extension, that's what I would do.  I'm helping the people by dealing with the game's dungeons, but also by giving them gifts, helping them pick vegetabls and plant seeds, giving them cool breezes on a hot day and making the sun shine when it's dark.  As a player, I don't need or even want the tangible rewards of food in the Astral Pouch or money or items I never use.  More than taking part in an adventure or "hero's journey," I was helping to realize the legend of the helpful Sun God.

Tons of games let me save the world.  Tons of cities, countries, and realms let me fight for them, to save the good people of wherever-the-hell.  Places like Hyrule, where I'm to assume everyone is good when all I know about them is the same 4 lines of dialogue they spout through the entire game, or Thedas, Skyrim, and so on, where I know for a fact that there are just as many rotten people rooting for me as just people.  Some heroes, like Snake, do it because they know how much worse things could get.  Some heroes, like Mega Man X, do it because they're the only ones powerful enough to defend the weak.  And some heroes fight for themselves, as Bayonetta and Dante do.

And there's nothing wrong with violent games, either.  I love Metal Gear Rising.  I'm working on collecting 30 Left Hands.  In Ninja Gaiden 2, an average playthrough on Warrior difficulty has you kill an estimated 2,000 enemies, assuming some retries and all Tests of Valor.  I've played that game so much that my total killcount is probably close to 50,000 or higher.  I've gotten the Zombie Genocider achievement in Dead Rising.  But in a game where all you have is a gun, everything looks like a target.  I don't think that Super Mario 3D Land is a violent game in the traditional sense, but what else do you use the fire flower for besides roasting Goombas? 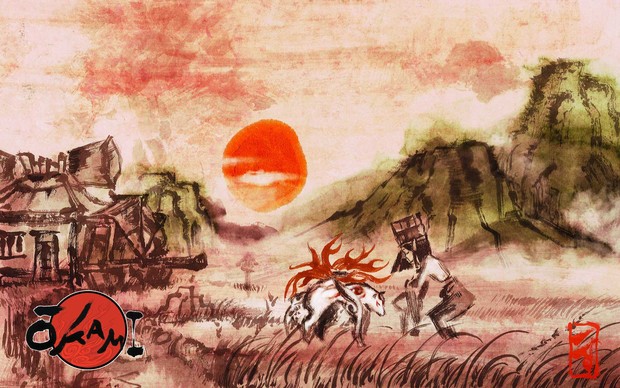 I'm a teacher by trade, and following my work on my thesis and my attempts to do something beyond myself, I find more and more that the games I want to play are games about helping people, and Okami has been the purest form of that for me.  I never had the mindset for Animal Crossing or Harvest Moon, and I certainly don't believe that by playing violent games you are a wicked or unhelpful person.  But there's clearly a difference between swooping down on the inmates of Arkham Asylum, putting a bullet in the heads (and groins) on São Paulo's corrupt politicians, and planting trees in the ground and stars in the sky.

Other games come close.  The Last of Us comes up often in this line of thought, but its serious premise relies very heavily on treating violence as a necessity.  Titles by thatgamecompany do a good job of providing beauty, but Flower has no concrete "help" to offer besides being a pretty electronic therapy, and the concept behind Journey is perfect except for the fact that it is very possible to play the game entirely by yourself, and by extension, for yourself (i.e. you want to see what's at the top of the mountain just as much as you might want to help someone else along, not to mention the rewards you're seeking out).

I know that during my time with Okami, I'll fight Orochi more than once and vanquish great evil from the land, etc. etc.  My goal as a player is to see everyone in the game happy, and to hell with the rest of it.  Helping others feels good, and though a single-player game from 2006 (ported in 2008 & 2012) doesn't change the external world, a game that lets me be what I perceive to be an ideal being is cathartic.  I think many of us want to be heroes, and those of us who do know that it's not always about strength or force, but about who you are and who you try to be.  Another gem from before Clover became Platinum told us something very important a long time ago: 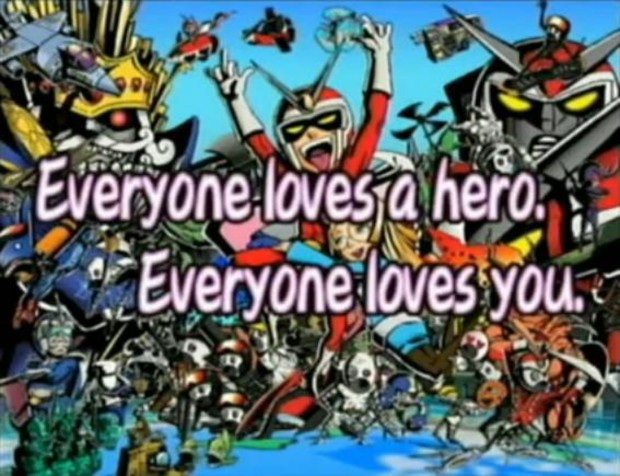 And sometimes we just need to hear that.

I haven't played everything, and my views and opinions are only informed by my own experiences.  Do you have a favorite nonviolent game, or a game about helping people?  Do you have anything to add to what I've said, or take issue with?  Share it!

Every once in a while I've got some proper shit to say about videogames.