You Should Try: The Fall

Boy, I haven't written one of these in a while! Today I want to tell you about a game called The Fall, which somehow passed me by and so I figured that many of you might have missed it as well. The Fall is the first in a trilogy of short, story focused games by developer Over The Moon. If you've been craving more creepy, sci fi, mind bending story telling in the vein of The Swapper then look no further.

The story of The Fall is the real reason you'll want to get into it. You're given the shortest of introduction scenes by watching your suited character fall from the sky through the ground and into a cave. A.R.I.D., the suit's AI, snaps on, realizes that the person piloting it is in critical condition, and takes over the suit to get its pilot to safety. That means that for the course of this game you will not be playing an actual person, but an AI trying to fight against its constraints to save its human owner.

The planet you'll find yourself on is lonely and filled with the corpses of humans and robots alike, tossed aside for unknown reasons, and you'll quickly meet a rogue AI who has deemed you as faulty and in need of scrapping. As you try to keep your pilot safe you'll notice that many functions of your suit have been locked, and those are functions that you'll really want to help stay alive. How far is it okay for an AI to push the limits for the sake of saving one human though? 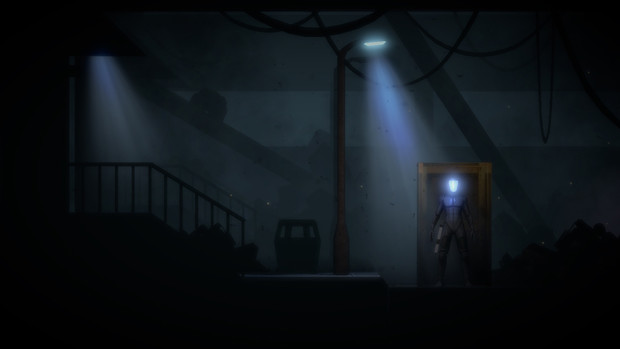 The overall goal of the story is simply to reach the surface of the planet in an attempt to find medical help for your pilot, but just taking the elevator would be too easy and wouldn't make for much of a game! The Fall's gameplay is made primarily of solving puzzles in a very adventure game format. You'll run around the dark and dreary setting collecting items and trying to wrap your poor little brain around discovering the best way to use those items to get past the obstacles in your way. And believe you me, you will certainly need to put on your thinking cap for some of these puzzles!

It's not all about the puzzles though, as The Fall has a solid, albeit scarcely used, action side to it as well. It's not terribly far into the game before you're finally given access to your gun, at which point you'll begin to face security droids and who knows what else on your path to the top. The combat mechanics are fairly basic, but they do their job. Holding LB will stick you into cover if there's any near you and you can use the right analog stick to aim at your enemies and charge your pistol for a relatively powerful shot. 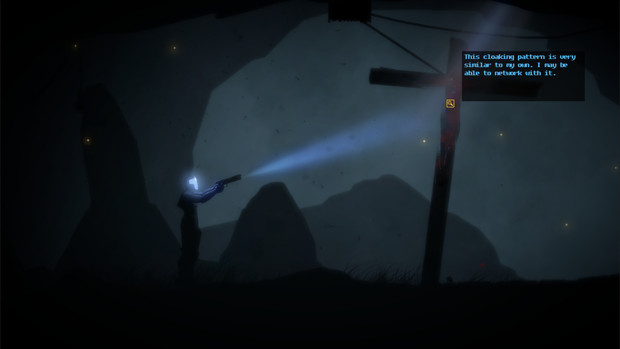 Once you've got your gun your primary experience will revolve around you exploring the areas available to you and swapping back and forth between your gun's flashlight and laser sight. The flashlight allows you to inspect things in the environment for interactions and the laser sight is for aiming in combat. You can only see whether or not something can be observed or interacted with by aiming your flashlight at it, which can be a tad annoying, but it's not anything that will really impede your enjoyment much. This means that you'll want to shine your flashlight everywhere; not only for items to pick up or interact with, but just for the pleasure of seeing what your AI has to say about the world around you.

The game isn't very long, clocking in around 3 hours (depending on how long it takes you to solve the puzzles), but it's certainly a memorable experience. I don't know when we'll see the rest of the trilogy, but if this first entry is anything to go by then I can't wait to get my hands on the rest of it. The game is only $10 and can be obtained either through Steam or DRM free through the Humble Store. Give it a shot some time! Oh, and thanks for reading.