A Look at Video Game Ads of the Past: Sega

Hello and welcome back to the latest installment in this series, where we take a look into retro printed advertisements of video games. If you missed my entries on Atari and NES ads, check them out for a blast from the past. While most installments in this series will focus on individual systems, this entry features ads from nearly all of Sega’s systems from the Master System to the Dreamcast. Due to the bulk of my comics and magazines being from the late 80’s and early 90’s, most of these ads are going to be for the Genesis, with only a few for other systems. Also, while other entries contain ads for products not related to games, such as peripherals, this entry will almost entirely focus on ads for games specifically. 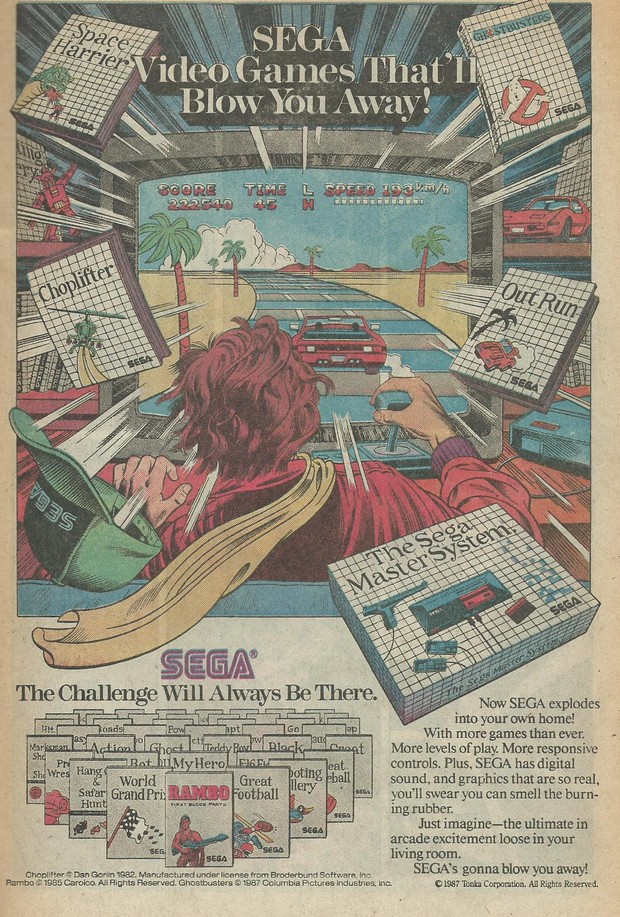 This is the only Master System advertisement I've come across in my collection. Like many other video game ads of the time, this one replicated the comic book style, since it was featured in a comic book. While many ads focused on the experience of the game, this is one of the few ads I've seen that actually shows someone playing a game. Still, it does a good job of advertising the feel of playing on the system, with the flying hat and air making it look as if the game was an actual race.

While going through and categorizing these ads, I noticed that ads started to transition away from the comic book style and feature real-life images more frequently around the launch of the Genesis. These images looked much cleaner and more readable than those for the NES. Some of the earlier game ads on the Genesis were composed of totally blank backgrounds with game artwork and some text filling in the empty space. Most of these ads carried the Sega slogan at the time: ‘Leading the 16-bit revolution’, a time when the NES was on its last leg and the SNES had yet to be released. Many of these early ads were hip and aggressive, portraying the Genesis as the cool system to beat in the 16-bit race. 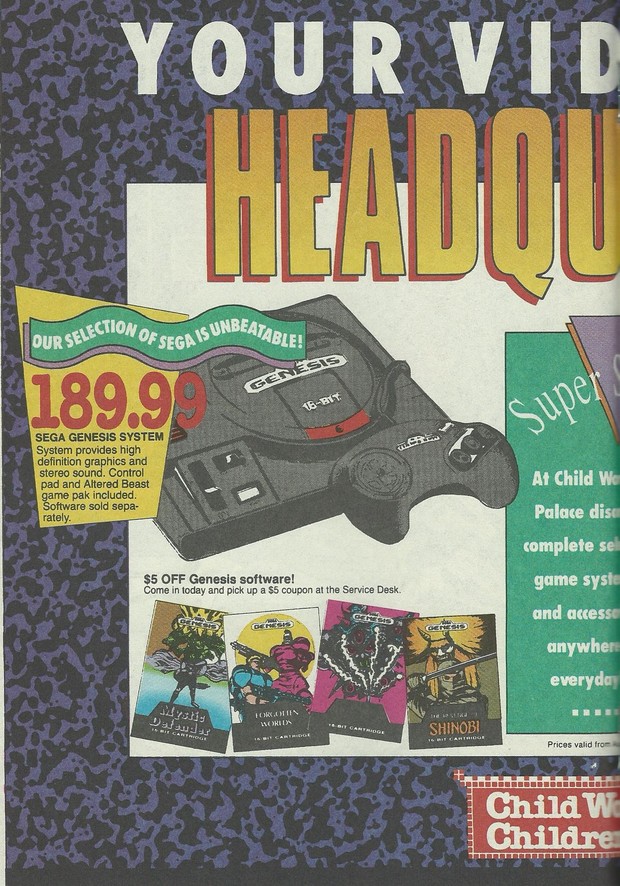 Part one of a two page spread. This is a store ad from a place called Children's Palace. As you can see, this ad features the Model 1 Genesis and came bundled with Altered Beast, the first pack-in game for the system. It's always cool looking back at prices for various products in the past. 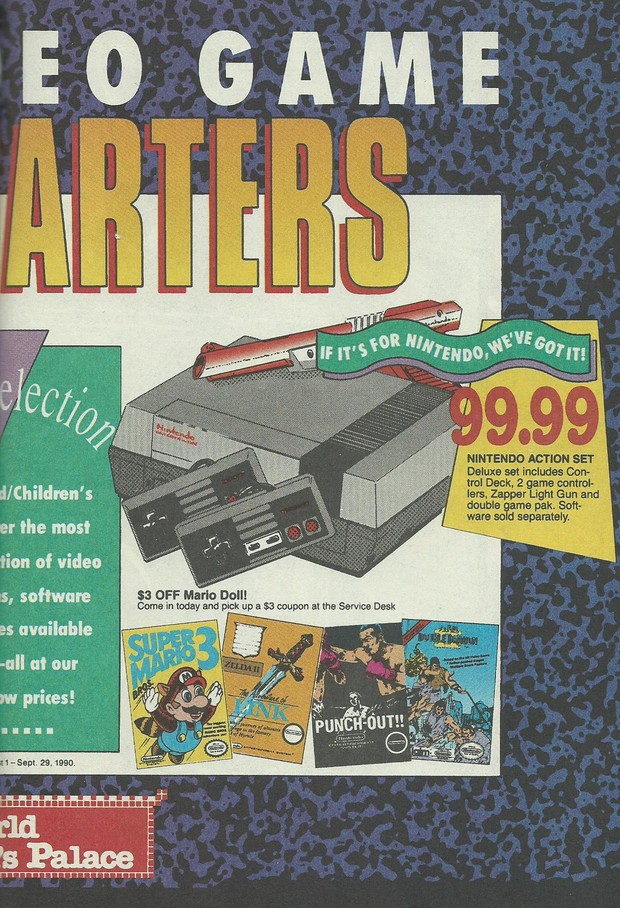 Part two of the previous ad, with this side focusing on the NES. 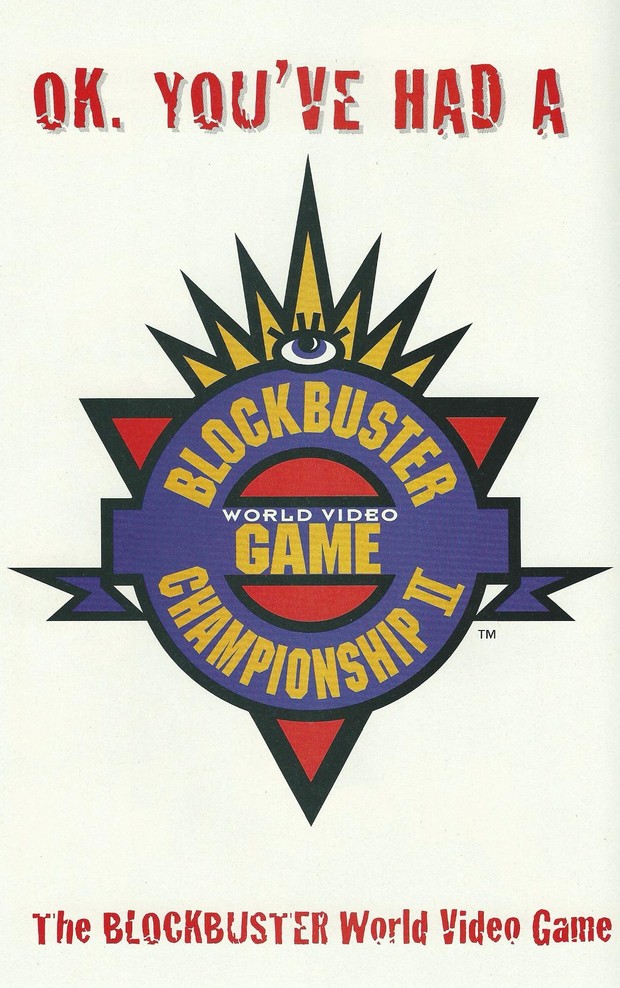 Part one of a two page spread. 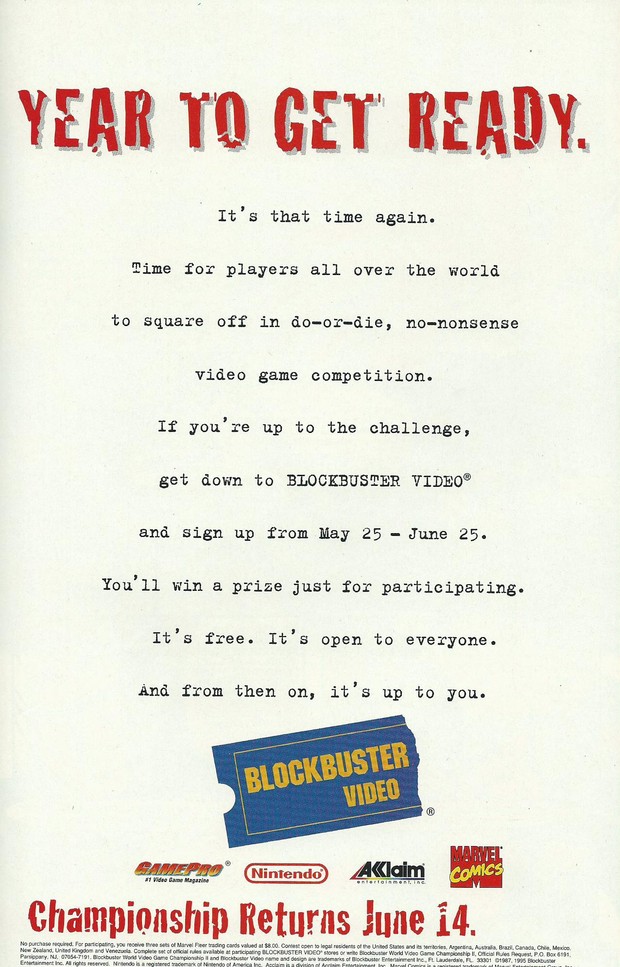 Part two. As a video game collector, it was really cool finding this ad. Both SNES and Genesis carts from this event fetch quite a bit of money. With Nintendo, Marvel, and Blockbuster teaming up, there's nothing more '90s' than a good old gaming championship. Did anyone attend one of these events? 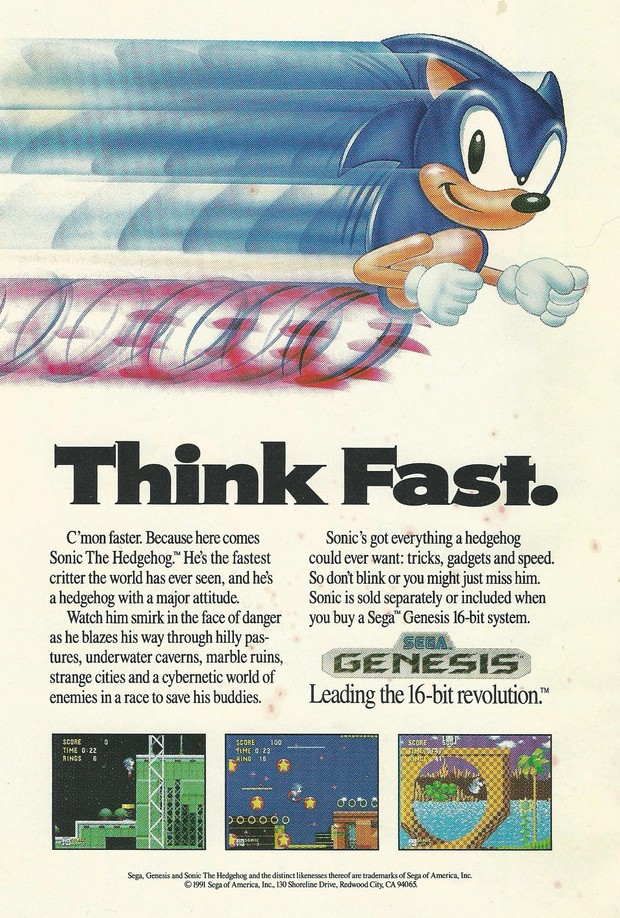 I love the simplicity of this ad, both in terms of appearance and its place in history. As the first Sonic game, there were no zany plots or wide cast of characters. There was just a hedgehog with attitude and fast-paced sidescrolling action. 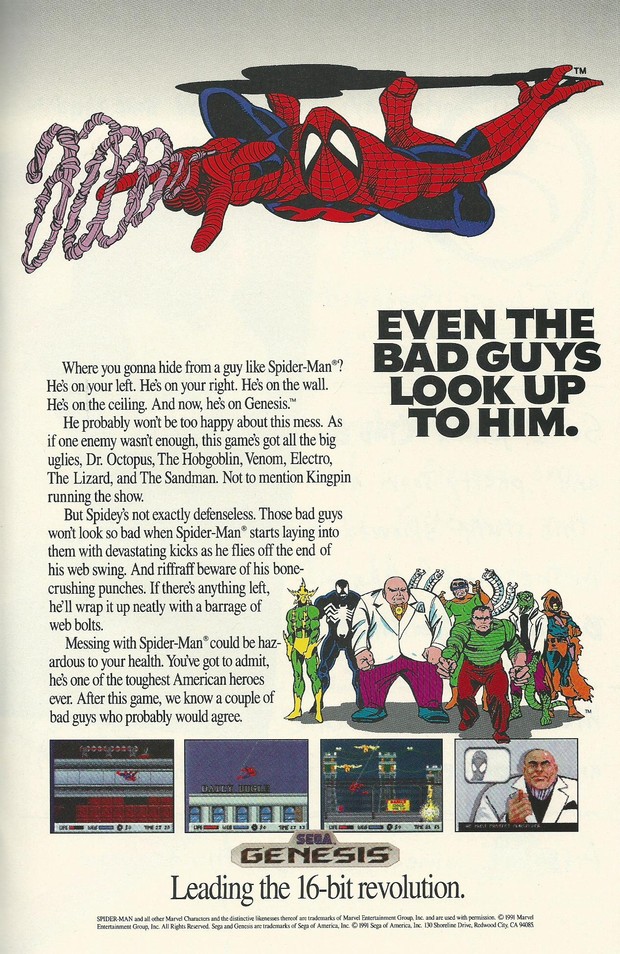 Cool comic artwork and a catchy description. What's not to love? 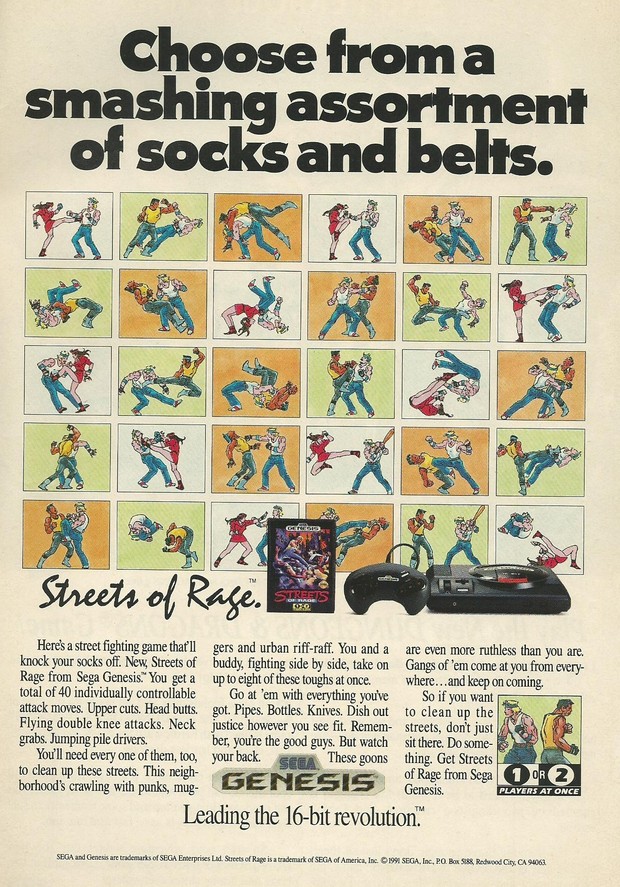 With so many beat 'em ups out there in the early 90's, I don't think I've seen any other ads that showcased all the different fighting moves in them like this one. It makes for a good background and shows what kind of action awaits. 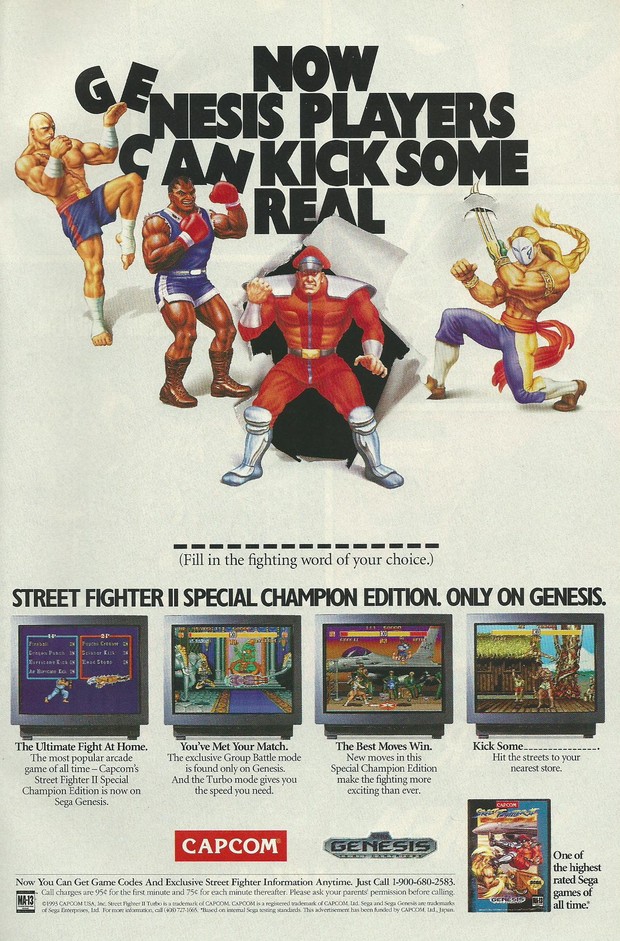 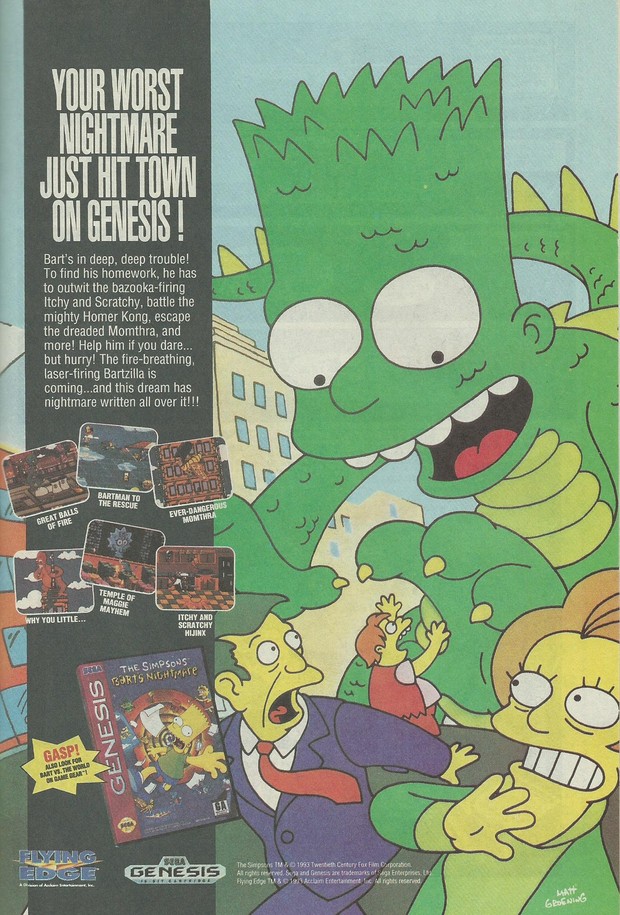 I admit that I've only watched a grand total of two episodes of The Simpsons in my life and know next to nothing about the show. With so many games and tie-ins in the early 90's, plus the reputation of the show, I wonder if I should check it out. 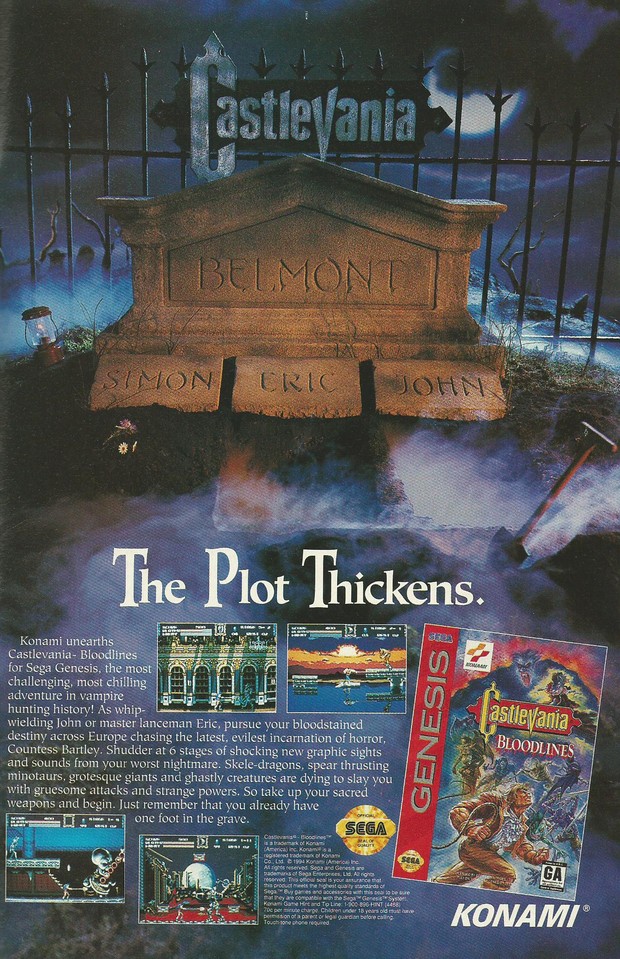 I really like the ads for the early Castlevania games and this one is no exception. This ad and the ones for the NES games did a great job of showing off the spooky, supernatural aspect of the games. 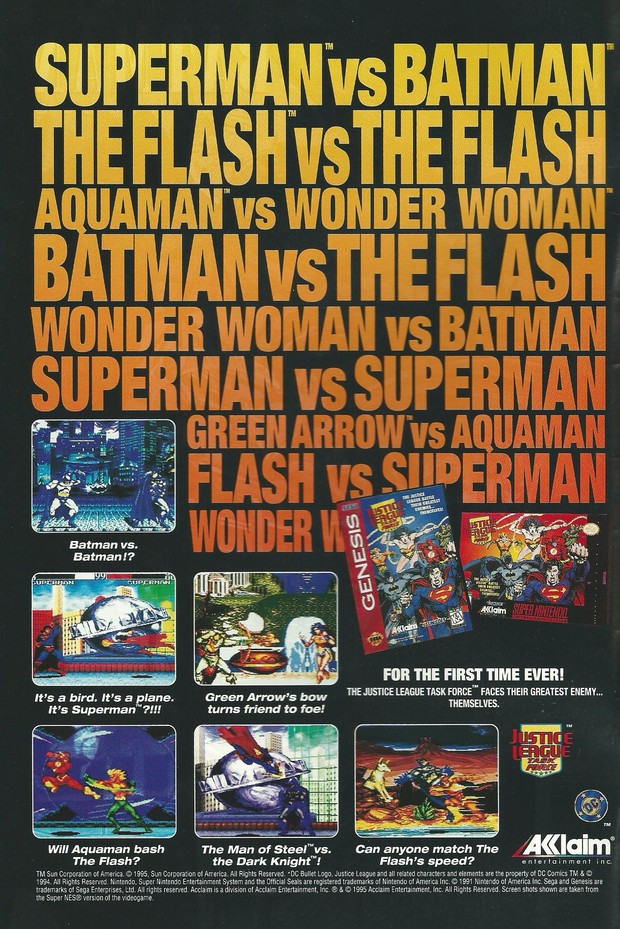 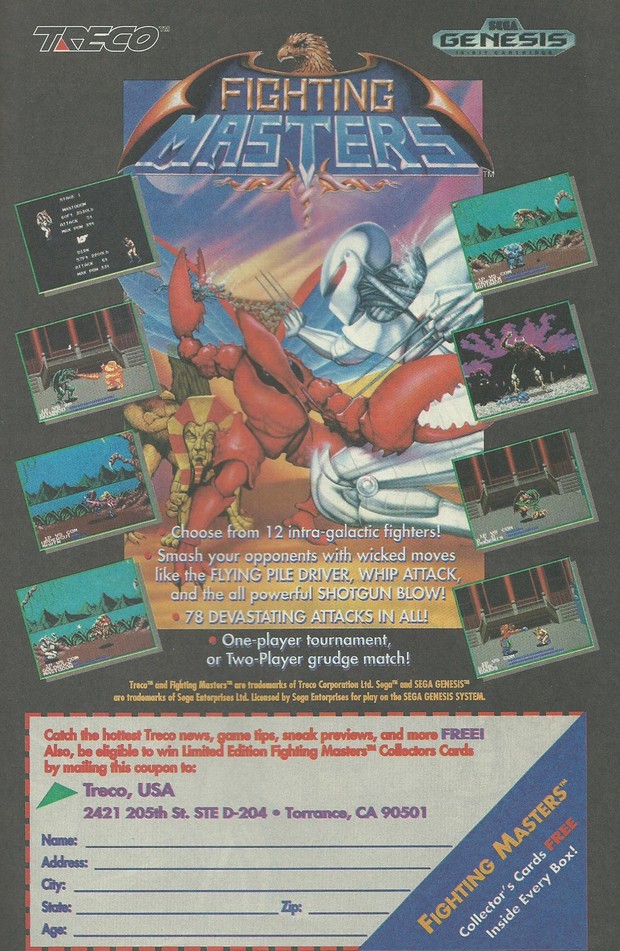 Interesting art, but the perspective is a bit confusing. It's a bit hard to tell what I'm looking at here. 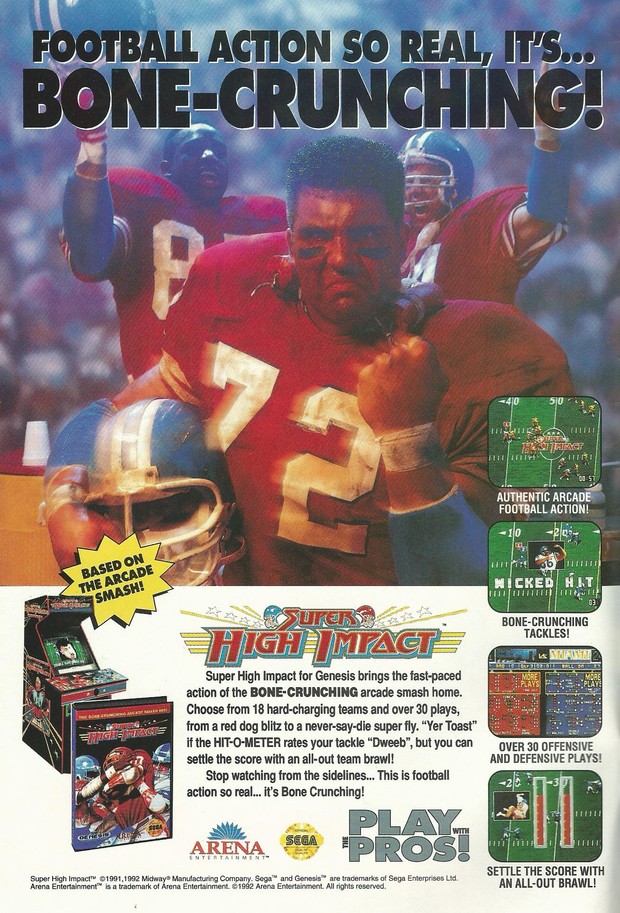 Looks like an NFL Blitz that came before NFL Blitz. 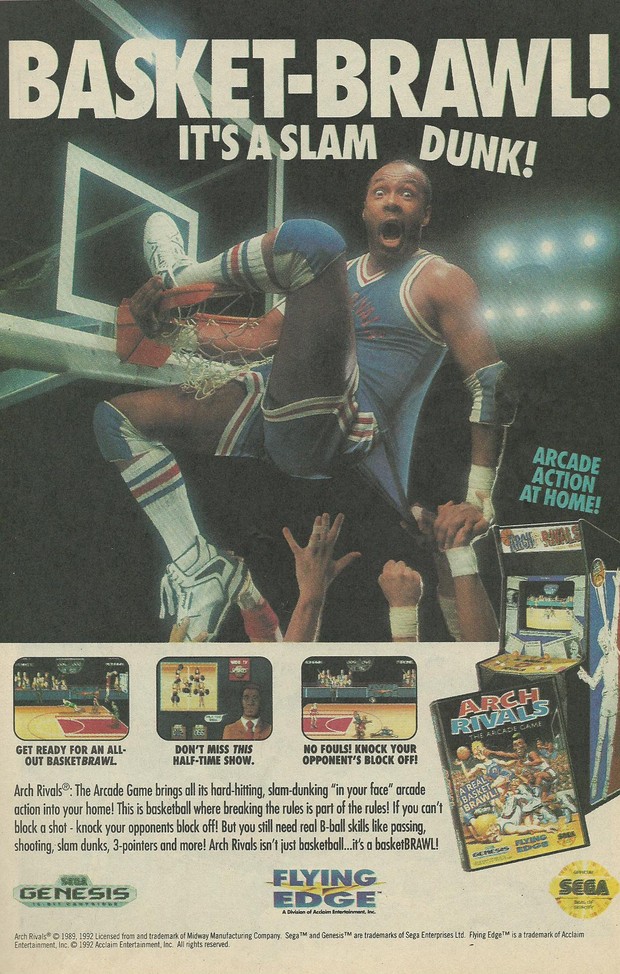 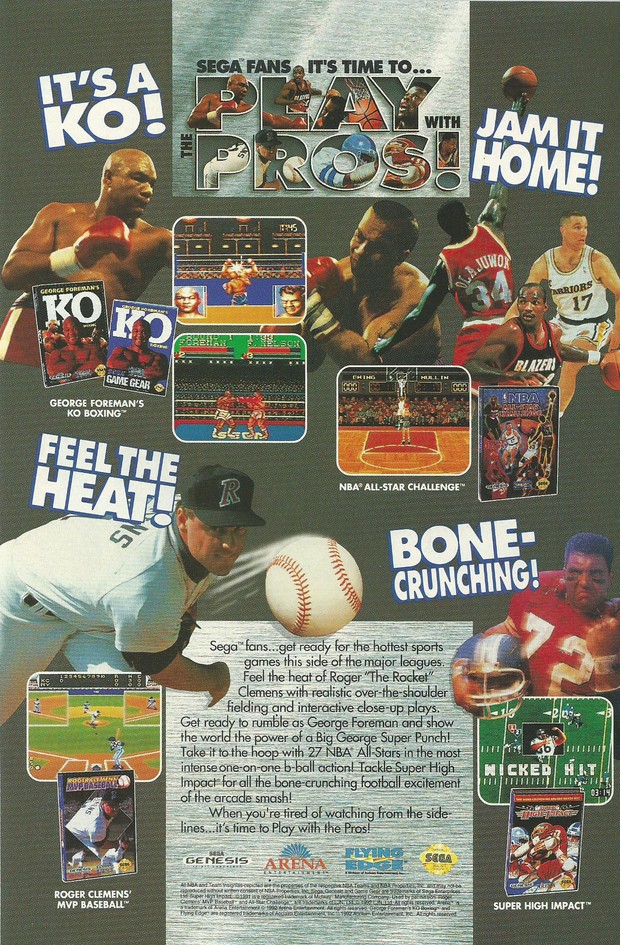 A compilation of sports games for the Genesis. I sometimes forget that George Foreman did more than grilling. 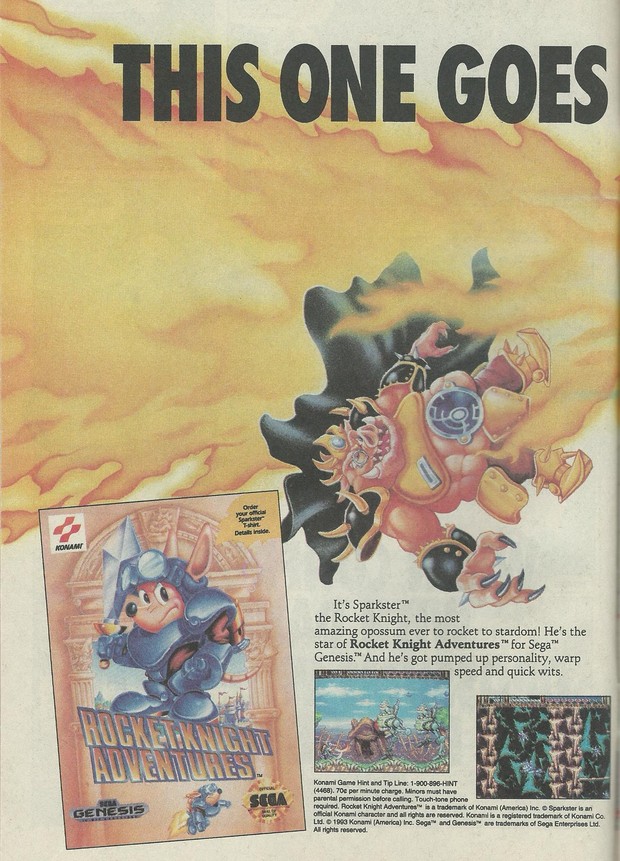 Part one of a two page spread. There sure were a lot of animal-mascot-platformers back in the day. 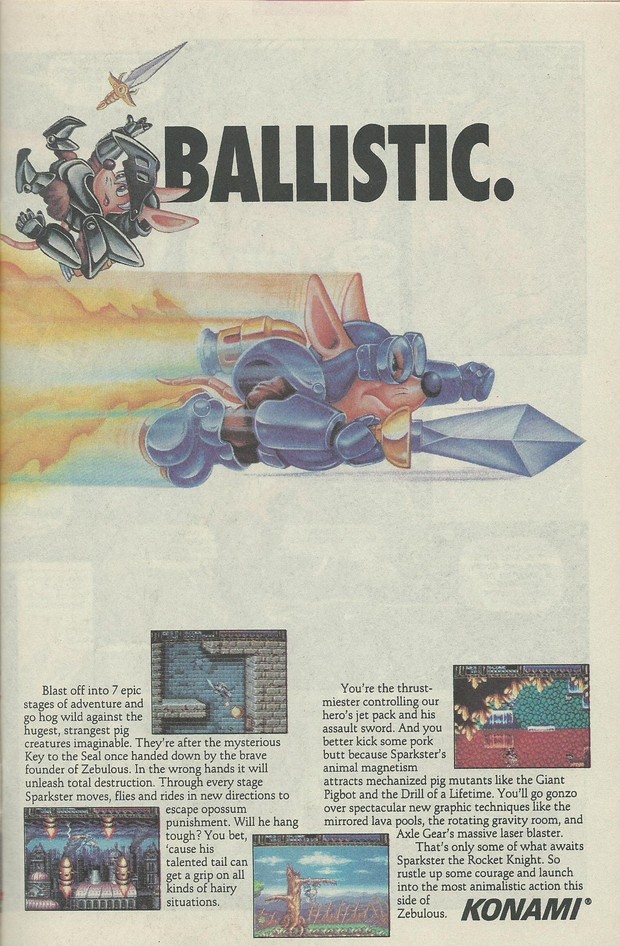 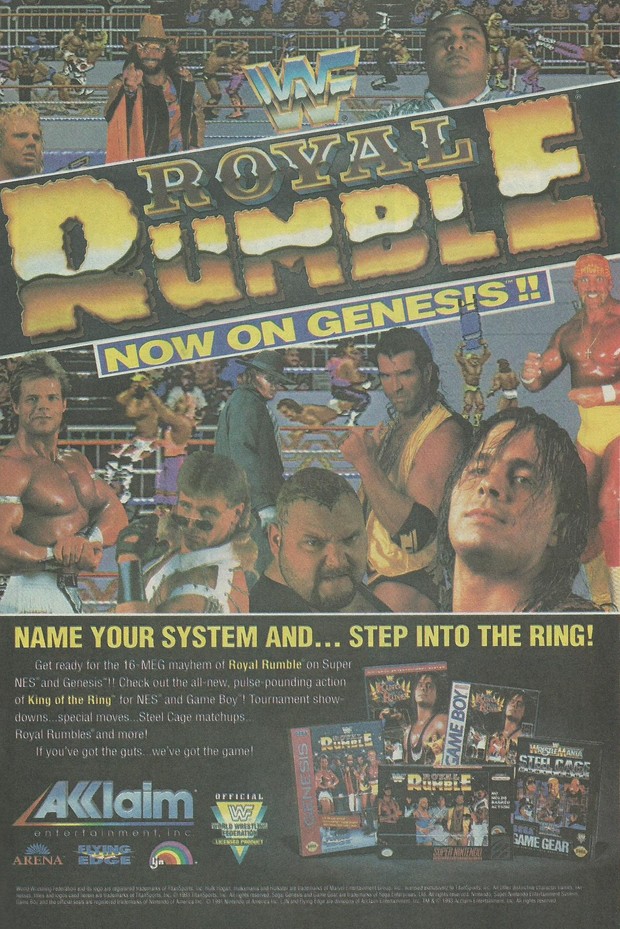 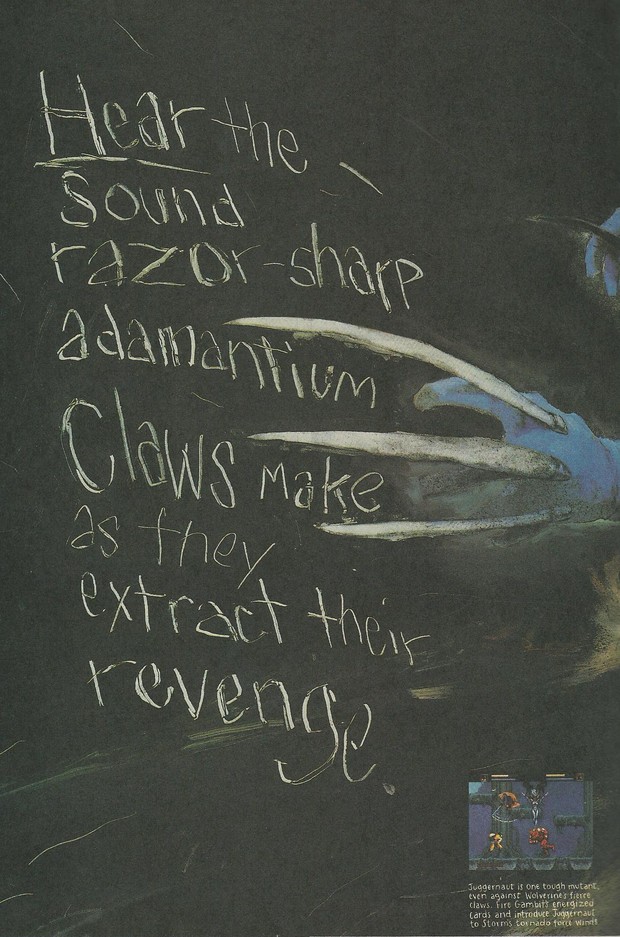 Part one of a two page spread. This is one of my favorite ads so far. The font choice and art style are fantastic, hyping up the game featuring the coolest super heroes at the time. 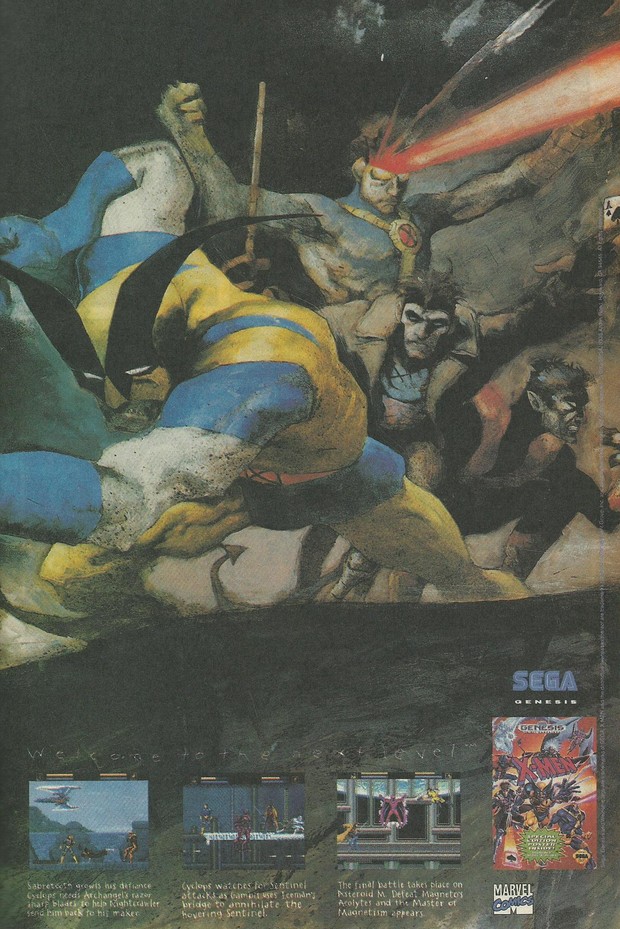 Part two. Seriously, I already have this game and the ad still makes me want to buy it. 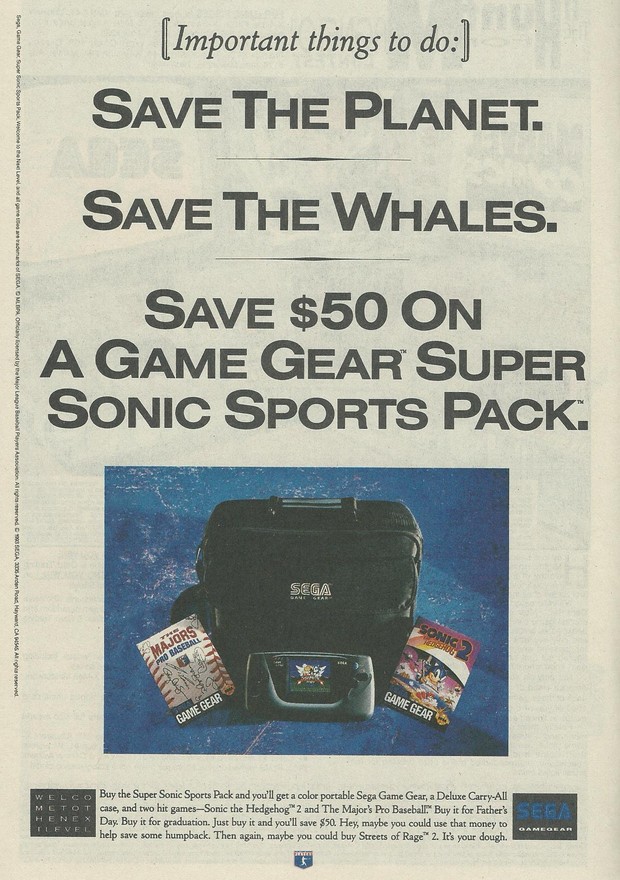 Do I have to do them in that order? It might be awhile before I can take you up on that offer. 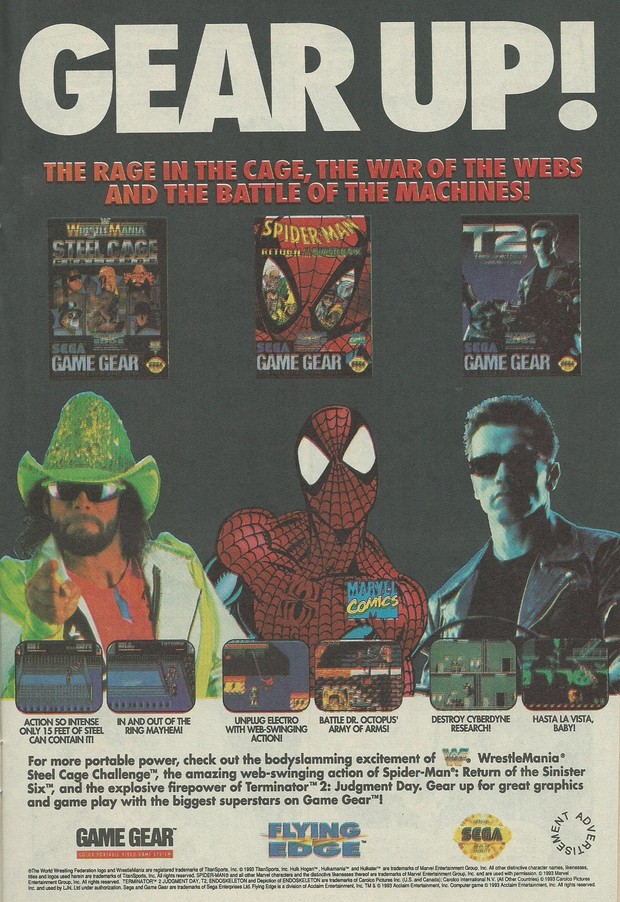 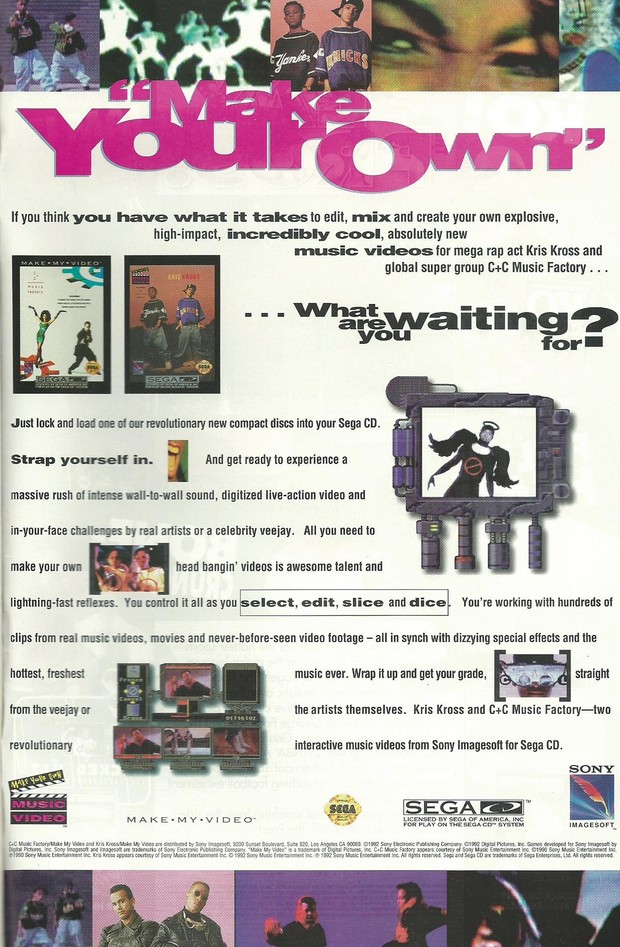 Aw yiss. I get to make music videos for all my favorite artists? I'll buy them all. 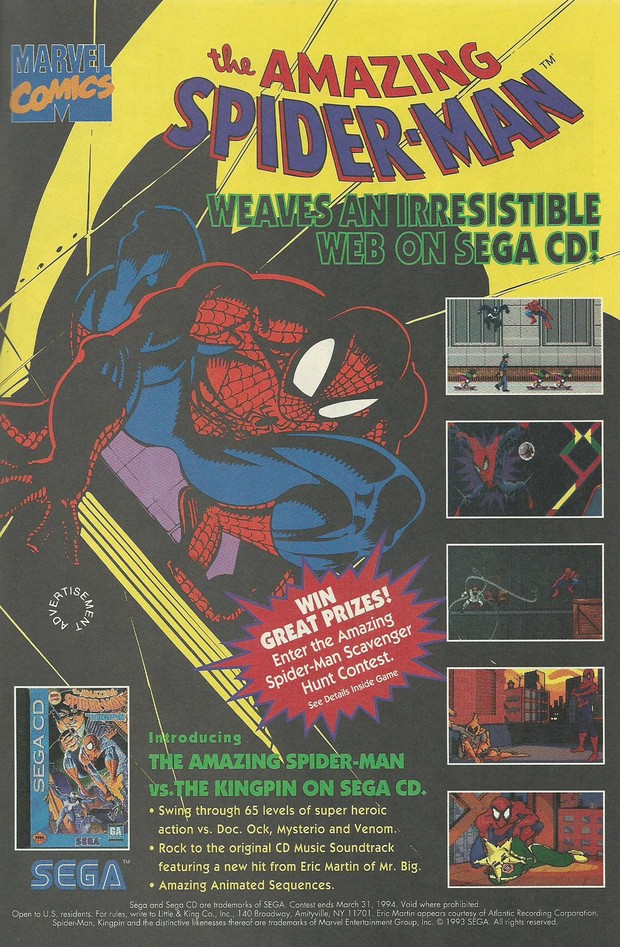 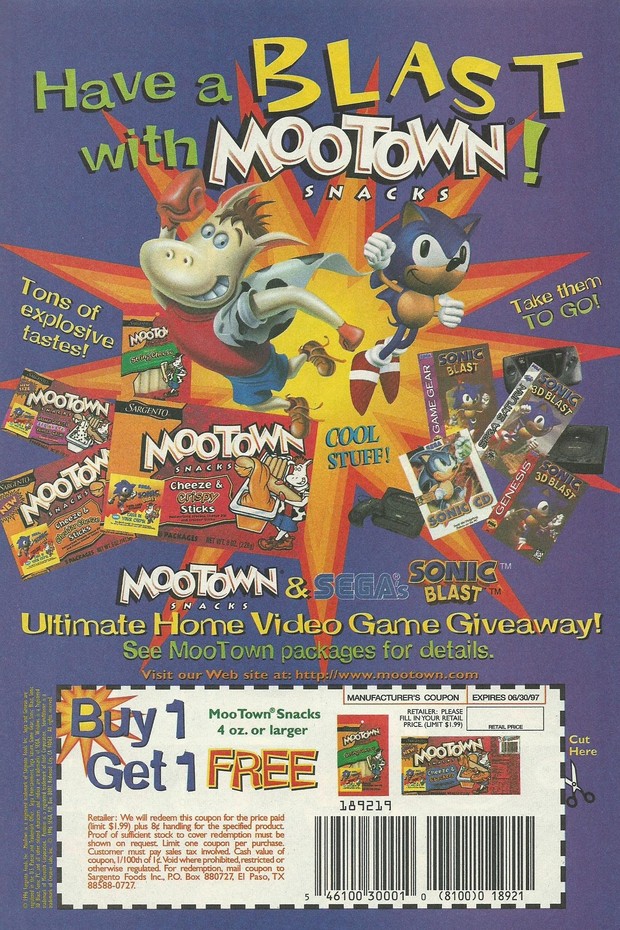 I wasn't quite sure where to place this, but here it is. I'm pretty unfamiliar with Sonic games on Sega CD and Saturn, but this ad was interesting to find. I wonder if Mootown is still in business. 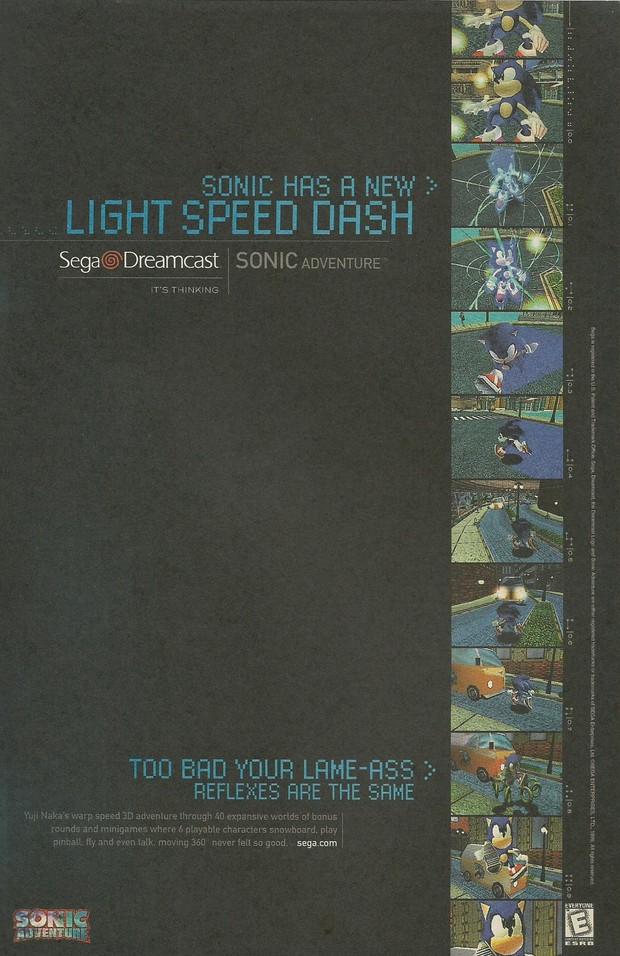 Lastly, here is one ad for the Dreamcast. You know, I think I can see why the Dreamcast was the last Sega system. I'm no advertising guru, but I don't think insulting consumers is the best way to go.