We're about to get mad learned up in here.

So Lets talk mobas for a second.  Mobile Online Battle Arenas are an evolution of the Real Time Strategy genre.  In modern culture they are used as a deciding factor among small tribes, to decide who has the right to copulate with which mothers.

The game is actually quite simple, as that it revolves around one mechanic, Unlubricated Penetration by mouseclick.  When a team, or more specifically one fizz or yasuo, roughly penetrates enough of the enemy team's orafices they may then buy lube.  This lube further humiliates the enemy by allowing faster and more easy access.  The enemy may attempt to purchase their own lubricants, or even restrictive clothing to prevent unwanted penetration, but fortunetly, there are items available for purchase that make even the hardest of turtle shells crack to the might of a fed Zed's throbbing shadowdong. 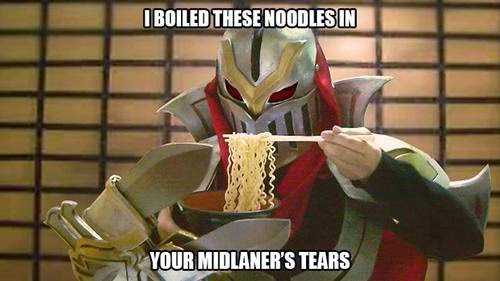 There are five positions in league of legends:

R-Road; where only people who's names begin with R go, usually the most northern part of the map.  Most players who prefer this lane are furries, as that its primarly an aligator, a cat, and a girl so ditzy she dosen't even know her sword is broken.

Strait line; the shortest distance to travel, for even faster losses.

Bottom.  Where specifically only 20% of the champions in the game allowed to go, because if you don't have a gun, the ability to heal, or instantly win the lane otherwise, you're immediatly banned for life. Many people think it is called bottom because it is the southmost lane, but it is actually due to having the highest percentage of assholes.

Jungle.  You go here if you cant last hit for shit.  Whilst the most flexible of all roles you spend most of your time dying to "neutral" monsters who just want to be left alone, but their corpses make amazing steroids. So lee sin despite adopting a golem as his own son, continues to massacre them so he can get them gains.

I am not even making this shit up, His "lore" is he was a league of legends player who fucked up so bad he lost his sight, and then he adopted a talking rock and taught it how to troll people with suprise mobility.

After 300 strait hours of being digitally violated, or "Rekt" as the prementioned white suburban kids call it, you will finally gain enough knowledge to play the in game RANKED FOR SERIOUS MODE, where you will dissapoint four strangers so fast you'll start to confuse them with your college girlfriend.

Which brings us to the topic.  Today marks the start of Season 5, where all your past ranked sins are forgiven, and you can fail your personal wishes and end up back a lower ranking.  Just remember it is because everyone on your team sucks, and you would be at least diamond if you had enough time.

It's a young man's game and whether you're a casual, or pro, don't forget to take A fucking shower.