A Look at Video Game Ads of the Past: NES (Part 2)

Hello and welcome back to the second round of paper advertisement analysis for the NES, where we continue our retro venture into games for the classic system. If you missed the first part, check it out for ads on contests, toys, accessories, and games of the NES. This entry and the next are solely dedicated to ads specifically for the system's games. Forgoing further introductions, let’s get right back into it! 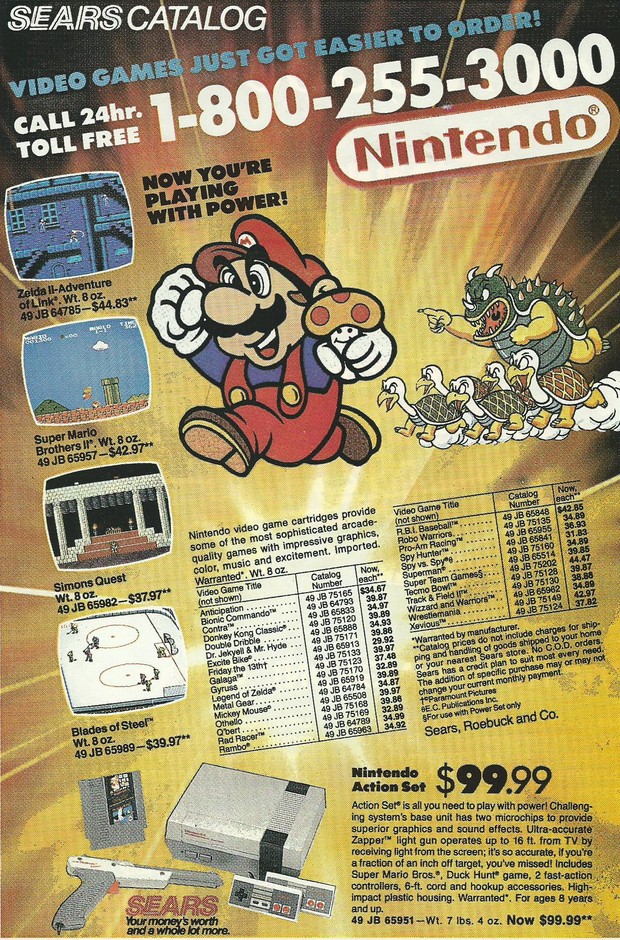 Hoo boy, there's a lot to this ad. I think it's neat looking back at prices for video games in the past. There was a wider range in prices for the NES than I expected, while some new releases had just a ten cent difference; I don't think any of the games in that list have the same price. The artwork at the top is nice, some classic Mario; I don't remember the koopas looking quite like that, though.

The more I looked at this ad, the more problems I find. First off, the images to the left are either out of order or completely wrong. The first image is incorrectly labelled as Zelda II: Adventure of Link when it is actually from Castlevania 2: Simon's Quest. The second image is from Super Mario Brothers, but reads for Super Mario Brothers II. Unless Sears was selling the Japanese version of the game, it looks inaccurate to me. The third image is Zelda II: Adventure of Link, but is called Simons Quest. It doesn't mention anything about Castlevania, plus misses the apostrophe in the title. Blades of Steel looks alright, though. In the second column of games, a game is misspelled as Wizzard and Warriors. I saw this ad in multiple comics over a decent amount of time. Did anyone proofread this before sending it out? I don't mean to be nitpicky, but the errors here were hard to miss. 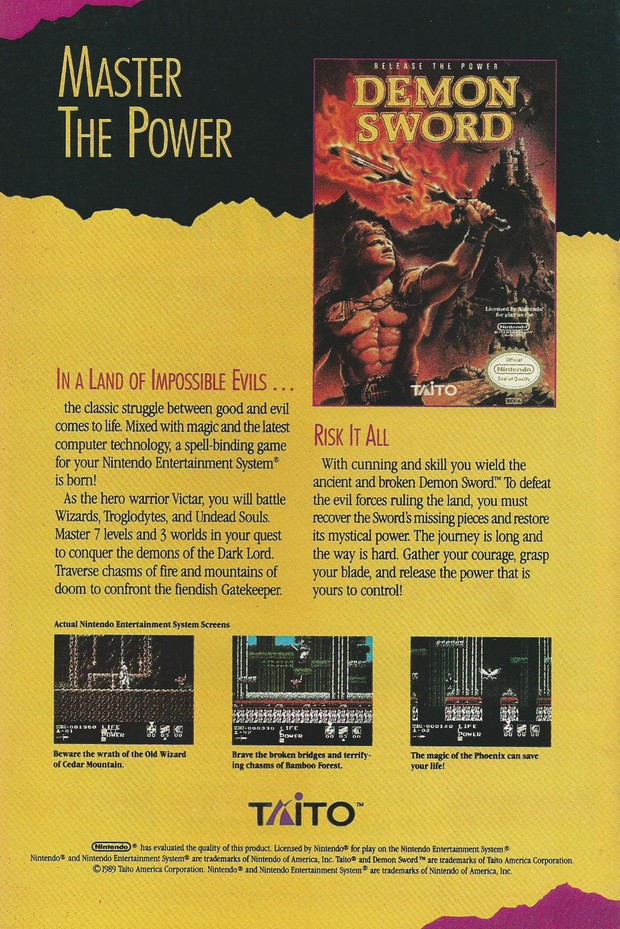 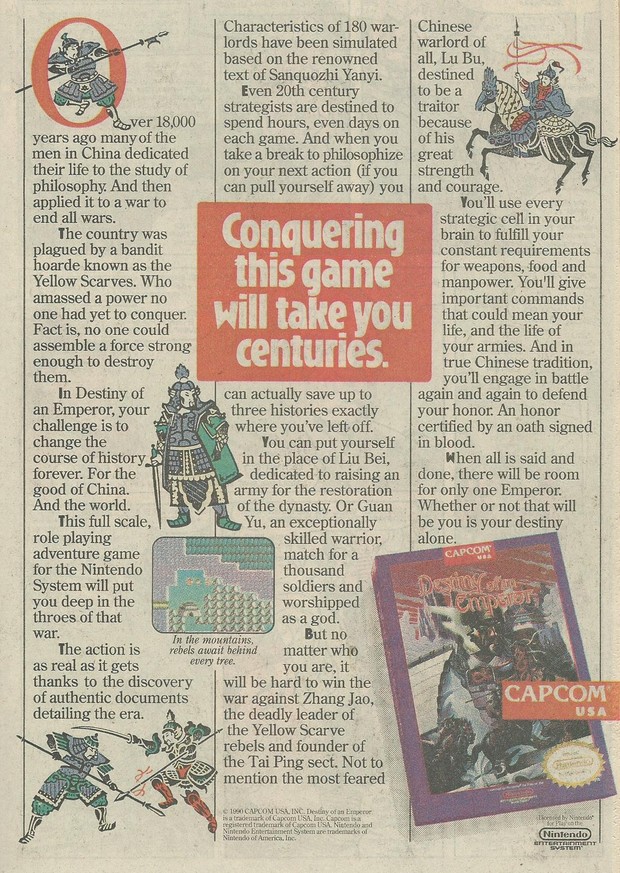 This is probably the most word-heavy ad I've seen so far. This one definitely needed to go through another round of proofreading. There's plenty of sentence fragments in just this short description alone, making for a really choppy reading experience. Also, they called the NES 'the Nintendo System', which isn't exactly correct. Overall, this reads like more of a history lesson than an advertisement. 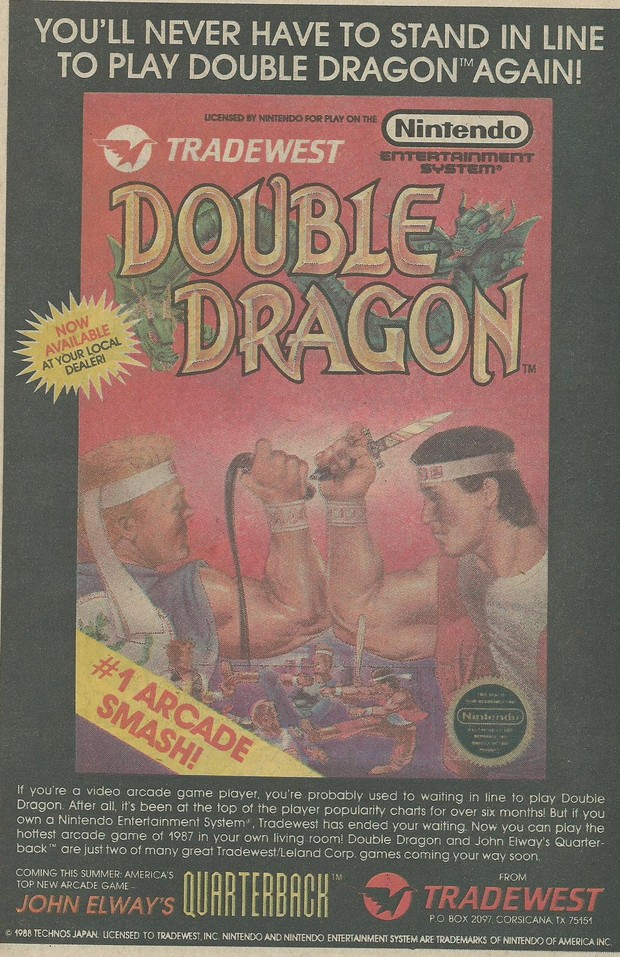 Most of the ad is just the box art of the game, but it does a good job of hyping the game by playing off the arcade original's success. 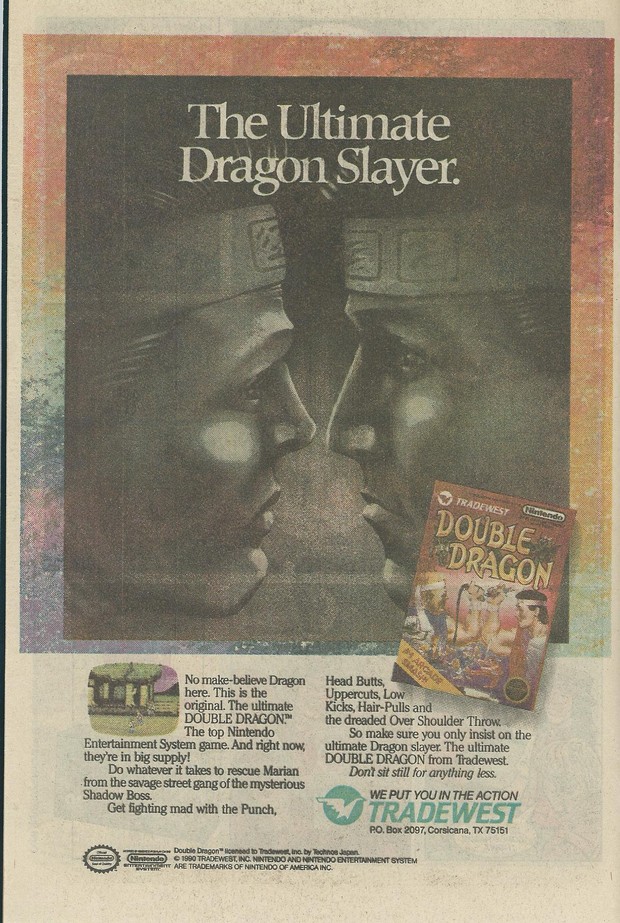 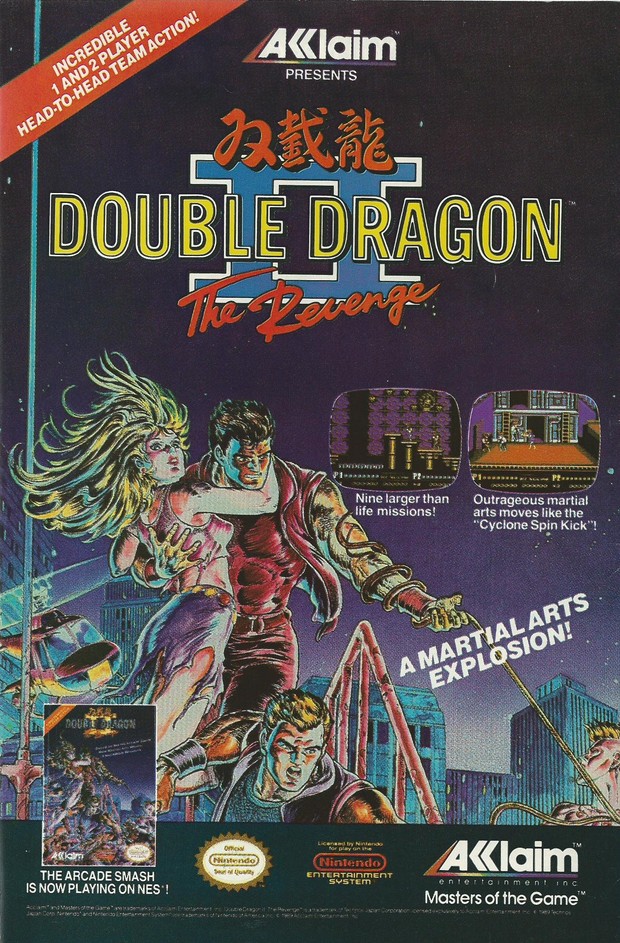 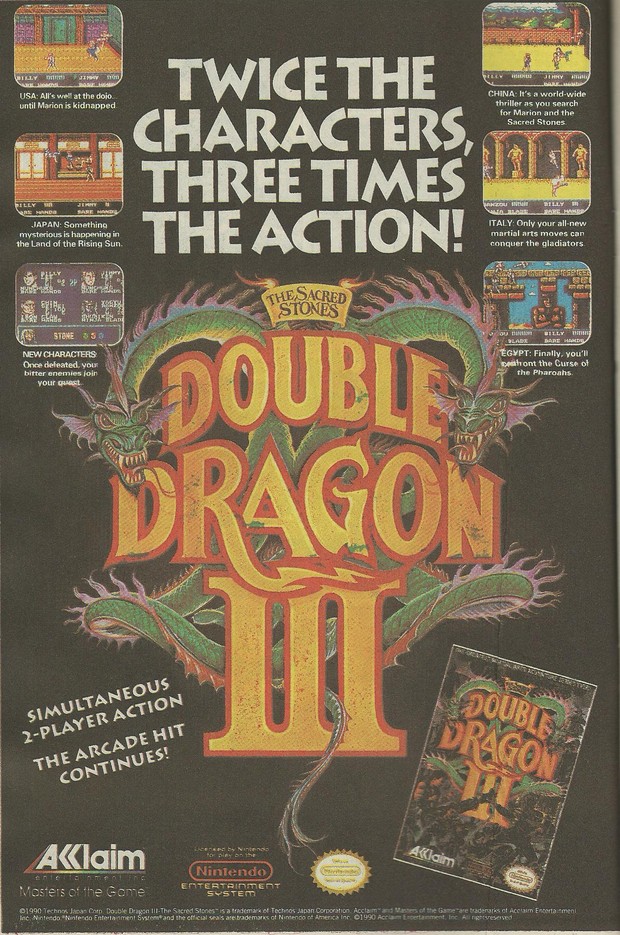 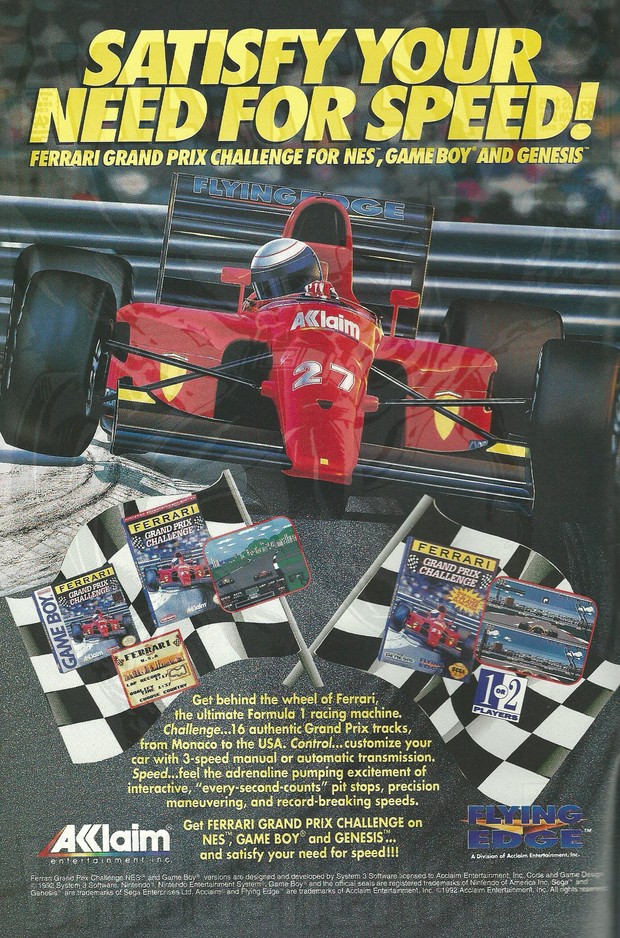 A lot of these ads late in the NES's history noted ports for multiple gaming systems. 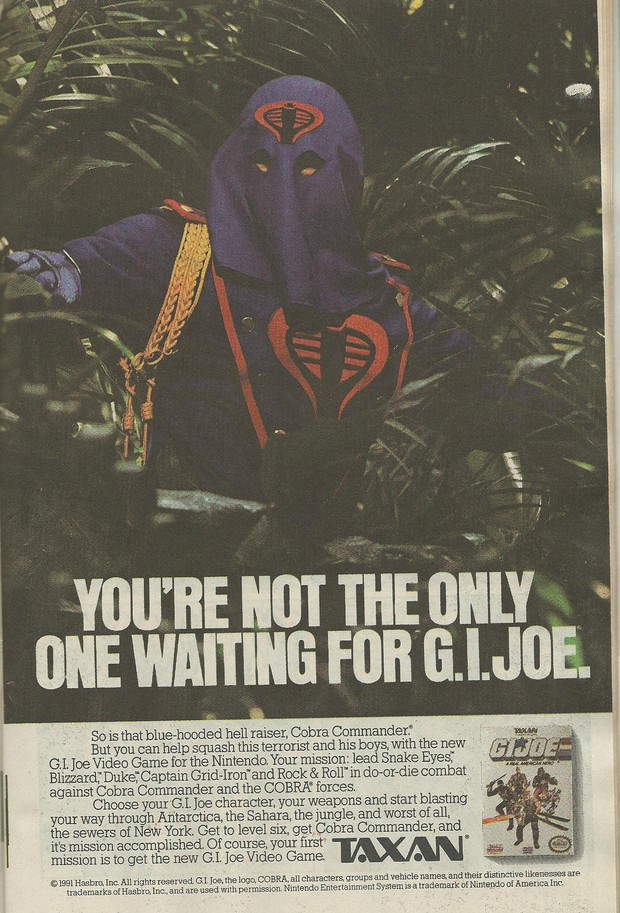 I've read plenty about licensed games on the NES and other systems at that time, but have never heard of this one. Does anyone remember playing this? 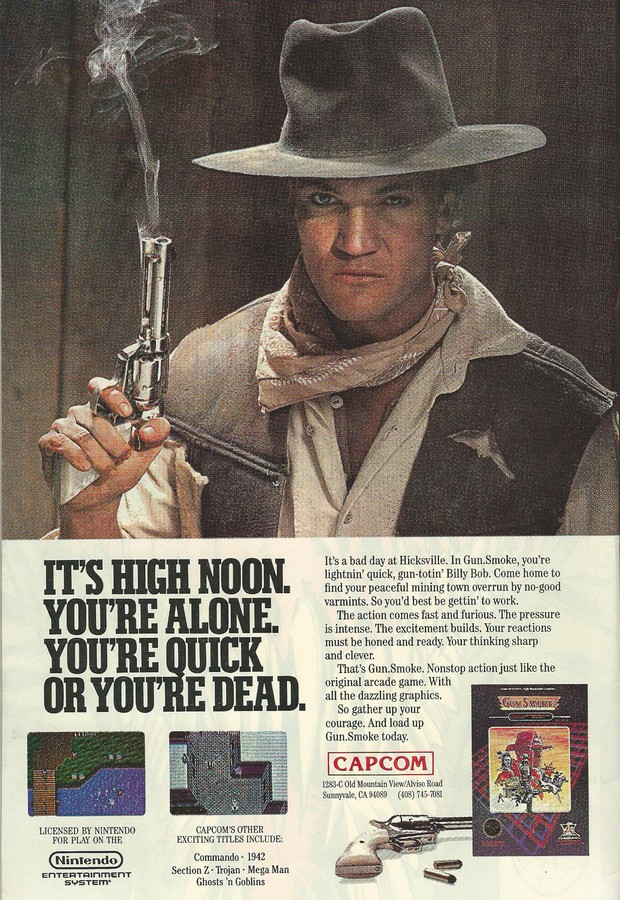 A good description in this one. Yet, a lot of these earlier video game ads had somewhat unclear screenshots; it can be tough to make out what is going on. 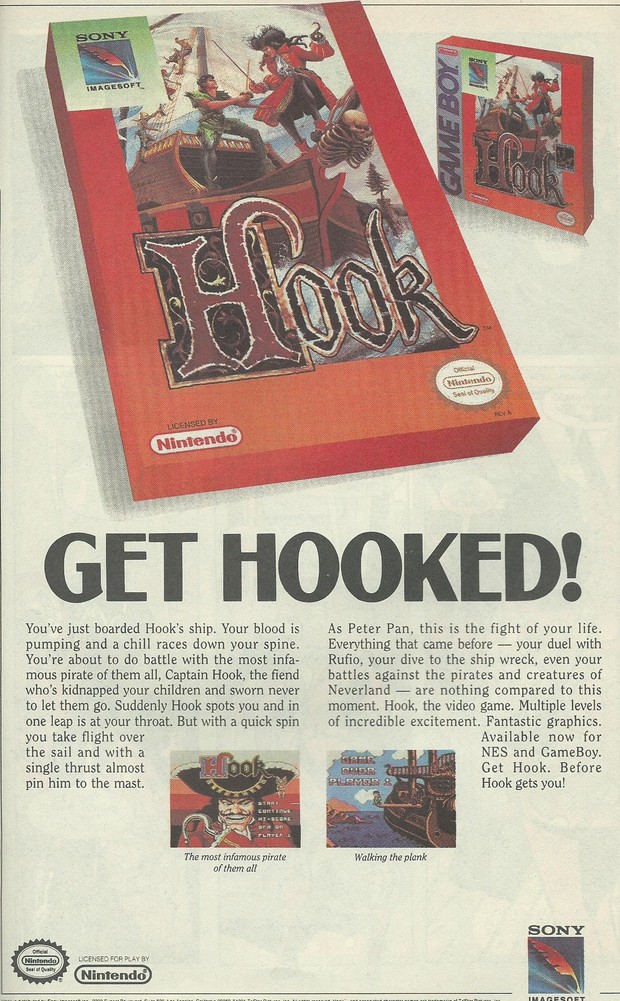 Not the best movie, but I enjoyed it. The Sony logo is an interesting bit of history. In retrospect, it's hard to imagine Sony working on a game for a Nintendo system. 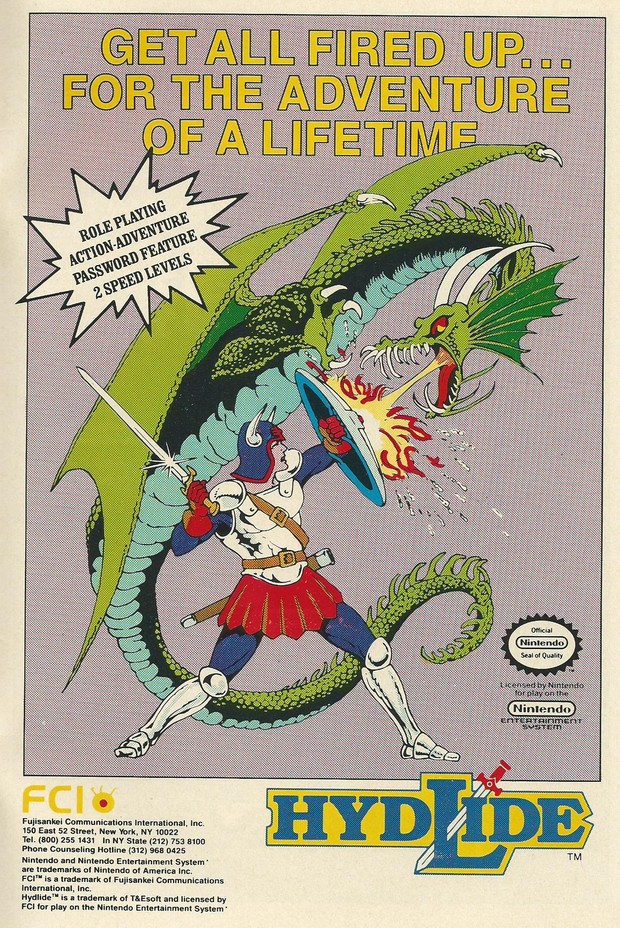 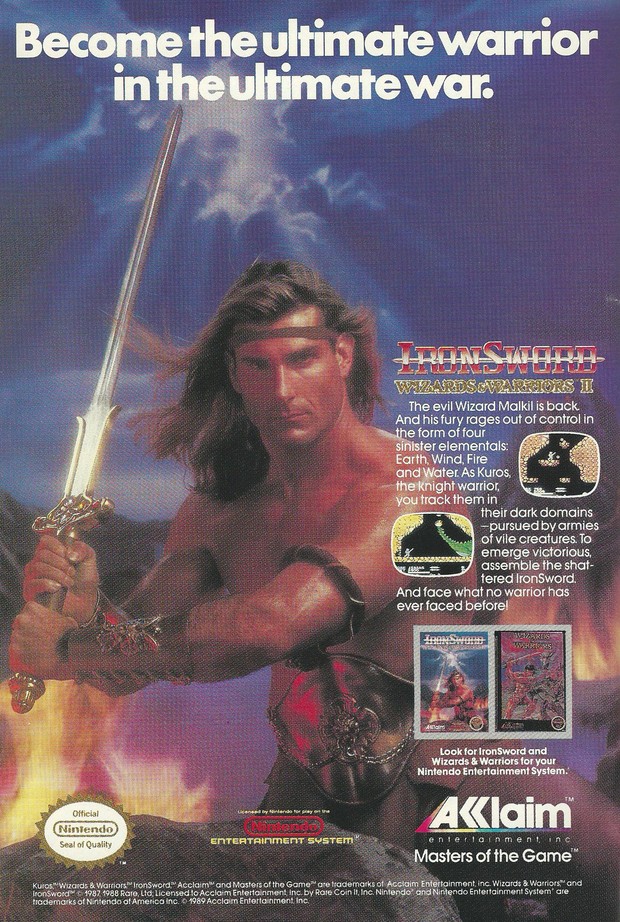 You get to be Fabio and stand in a volcano. Hey, I'm sold. 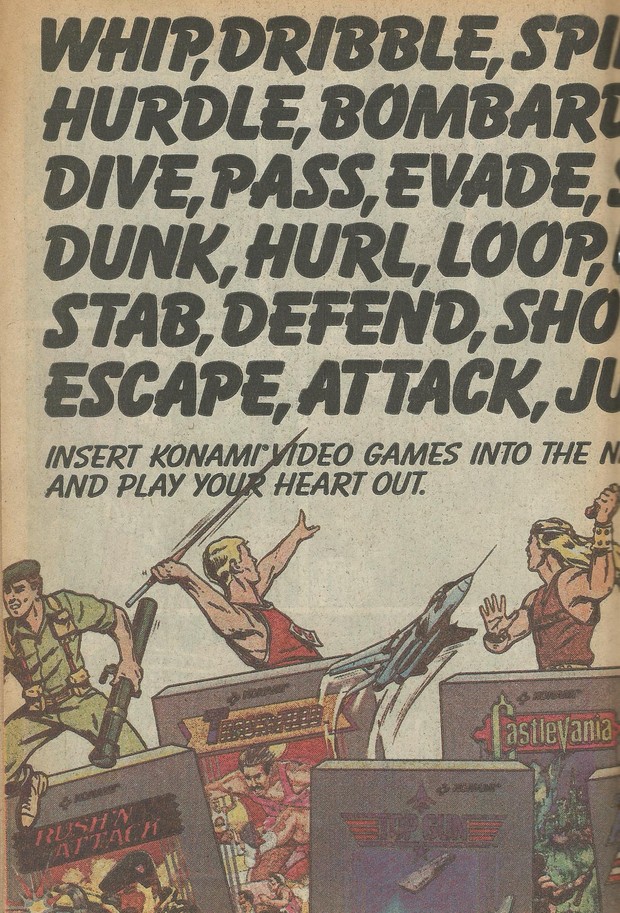 Part One of a two page spread. I really liked this ad. It advertised some classic games using just action verbs and box art. 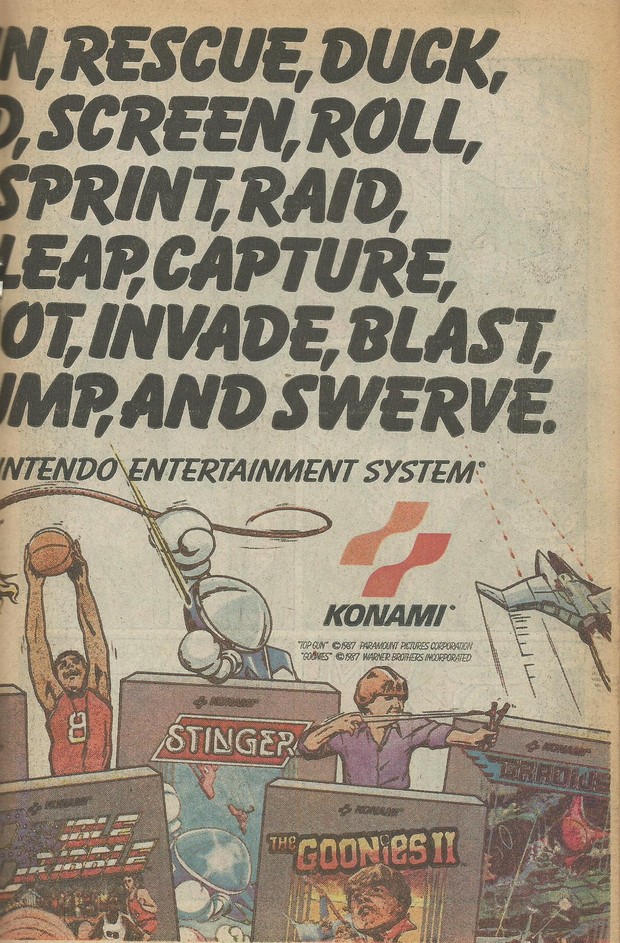 Part two of the previous ad. 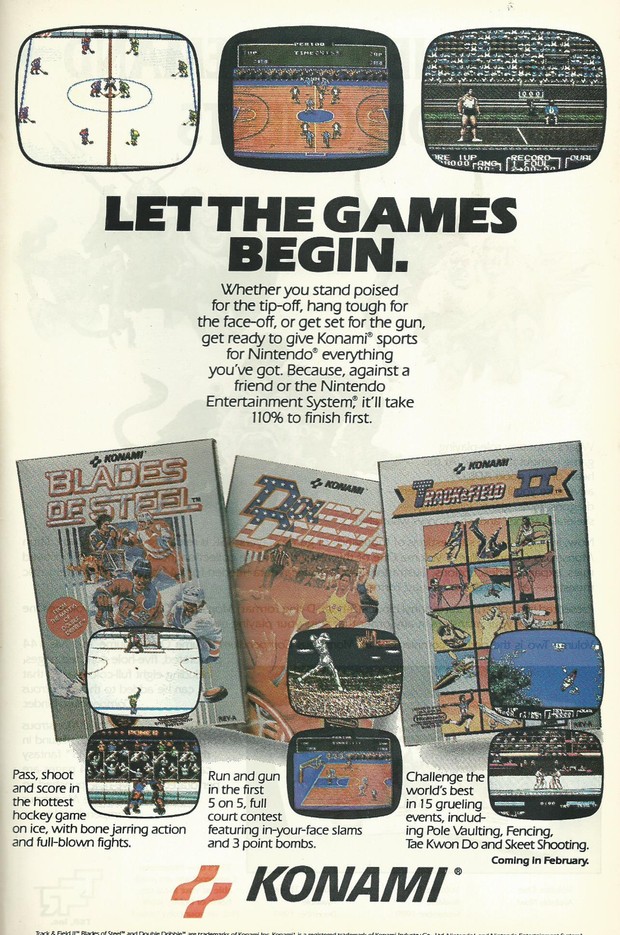 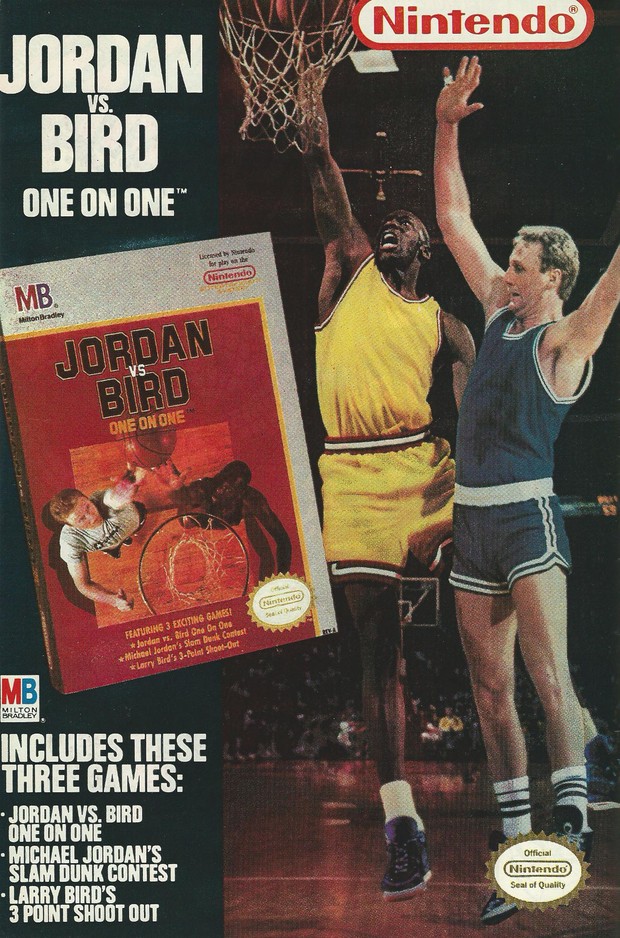 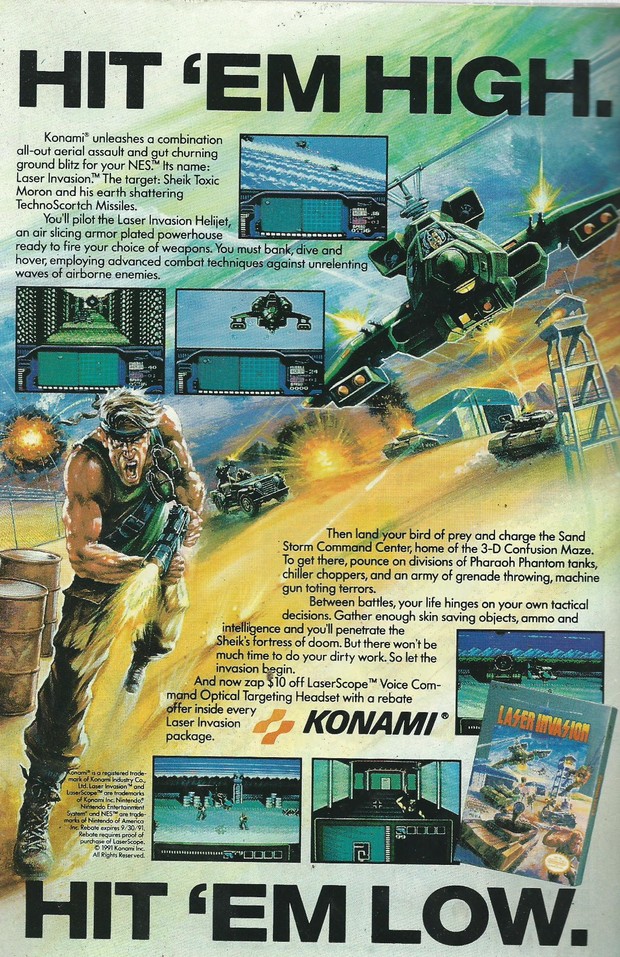 I like the framing of the art with the text and screenshots. I've never played this one before, but a game called Laser Invasion with a villain named Sheik Toxic Moron has to be good. 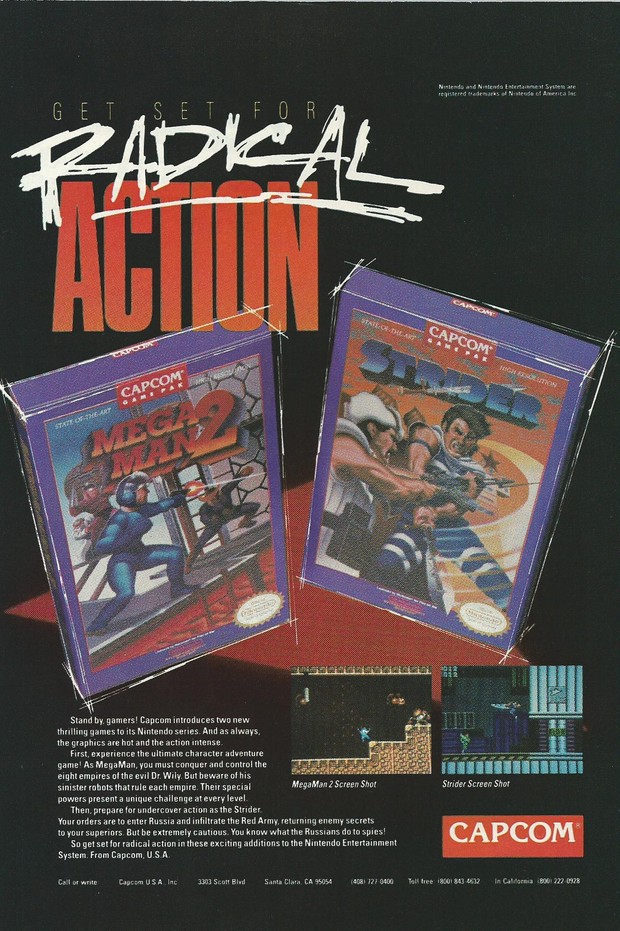 Two classic Capcom games. Seeing phone numbers and addresses at the bottom of many of these ads makes me wonder if those are still for the companies or if they have changed over the years. 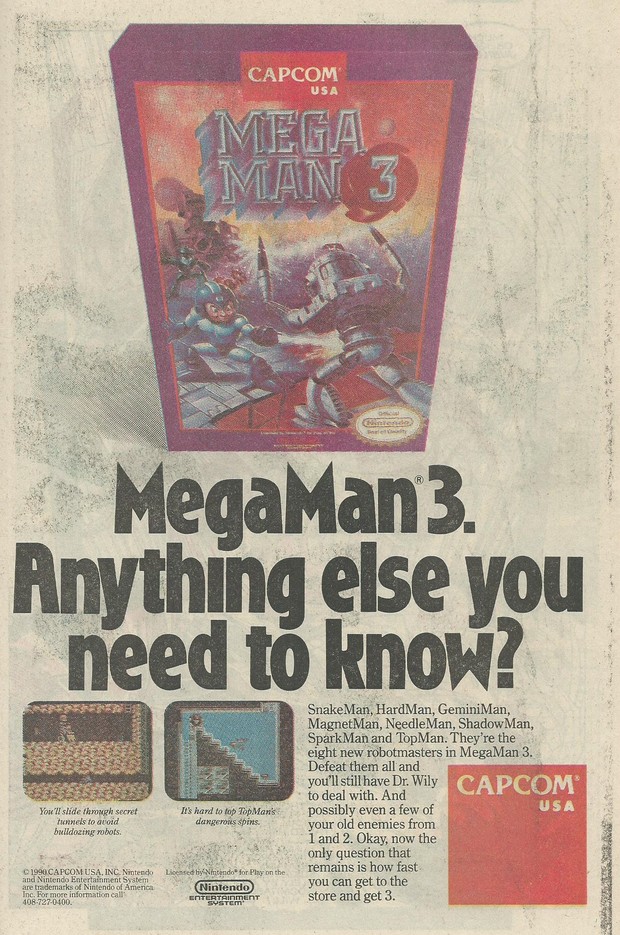 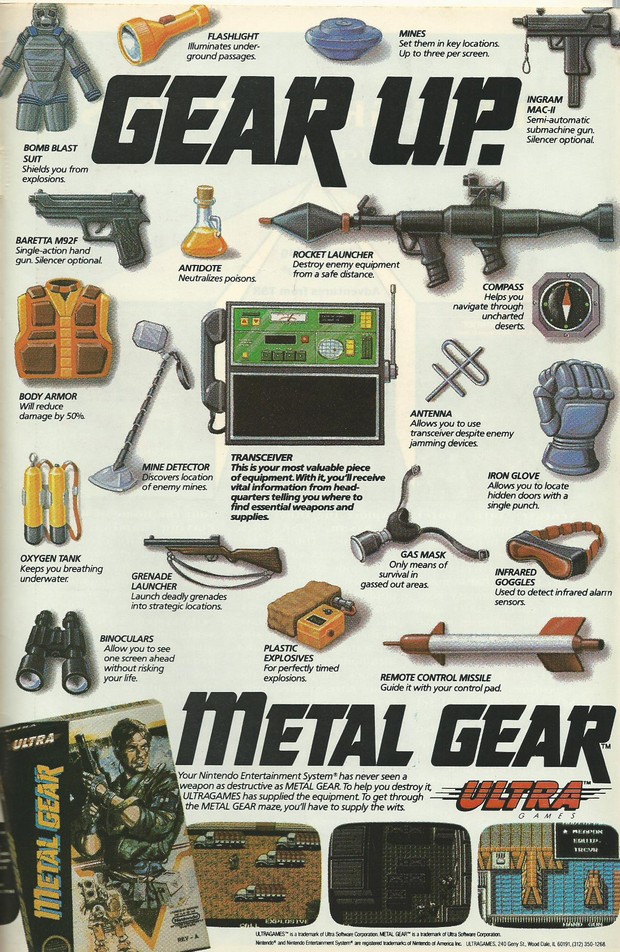 Gear up with Kyle Reese on an adventure like no other. 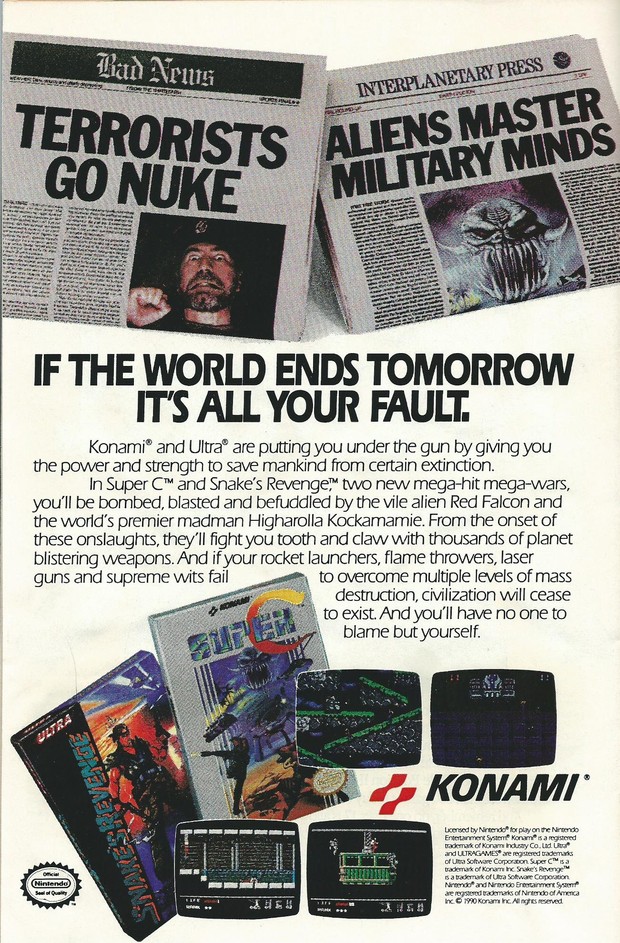 That's a great title for the paper on the left. The image has me puzzled, though. Is that one of the terrorists? Instead of looking threatening, it looks like the camera flashed at the wrong moment. 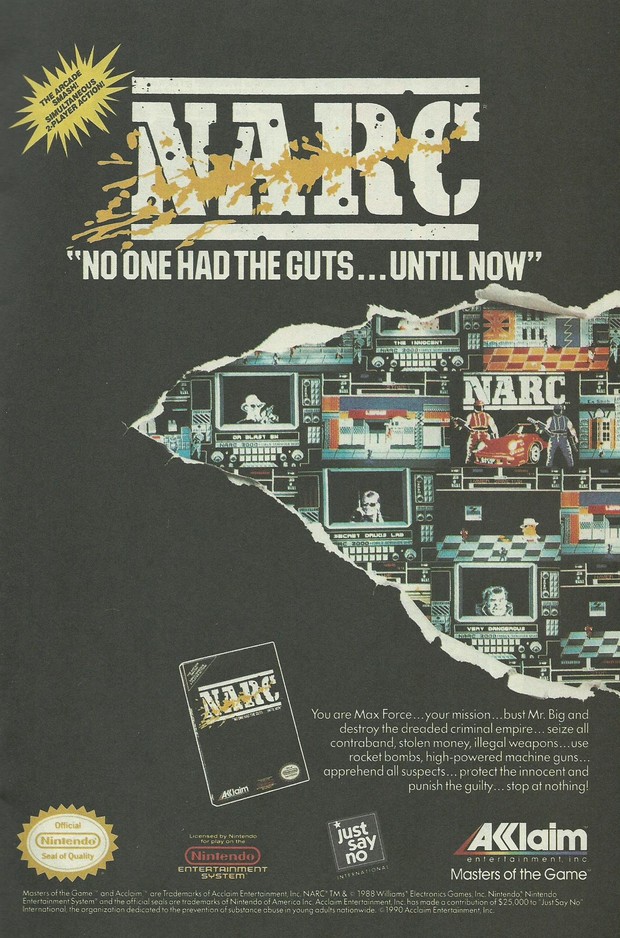 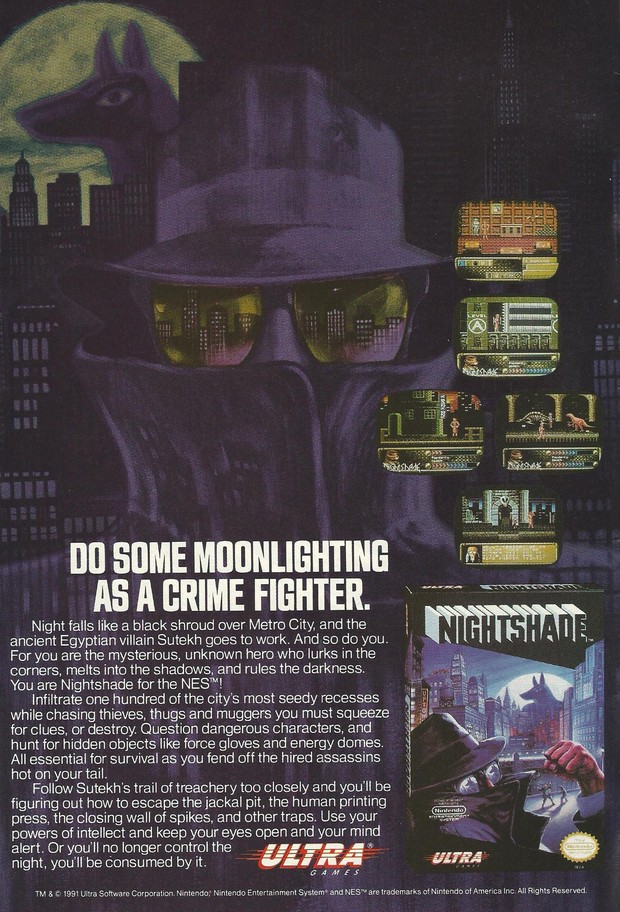 Overall, pretty cool artwork and description. Is he flexing in the box art?