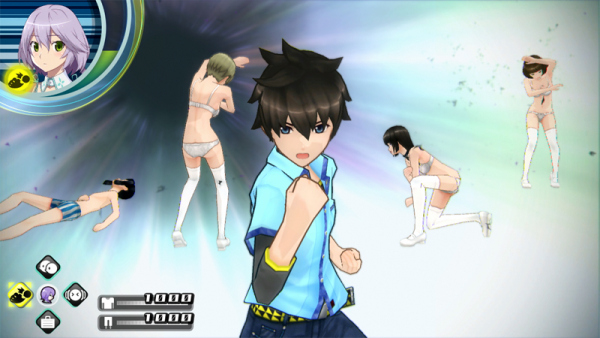 You’re the best! Around! Nothing’s gonna ever keep you down!

Being a lifelong fan of the weird, transgressive, bonkers and otherwise not acceptable in polite company means I cross paths with Japanese culture an awful lot. The films of Takashi Miike and Shion Sono. The short stories of Edogawa Rampo. The insanity of Junji Ito’s manga. The list is endless. I unapologetically own Onechanbara: Bikini Samurai Squad on 360 AND Wii AND I own the movie (which are all pretty terrible). So when you tell me there’s a video game on PS4 about fighting vampires in broad daylight by stripping them to their skivvies in the busy streets of Akibahara, Japan… I say: sign me up!

Enter Akiba’s Trip, a 3D brawler with with some romance visual novel stuff thrown in. It should be noted that the game is really best played on the Vita. The areas are so tiny that it feels like you’re in loading screens as often as the game itself. The actual fighting feels clunky and imprecise. On a technical level it’s not a great game. But as a delivery system for the batshit crazy, it’s loaded to the gills. The PS4 exclusive Twitch integration and the Toybox mode (as well as some technical upgrades) are nice, though. The cast is likable and the dub is actually pretty decent. Chaining a ten hit combo of pantaloon snatching is never not worth a laugh… and in a faithfully recreated Akibahara, complete with fliers for existing IRL locations, too.

I love that I live in a world where weird shit like this gets made and, having switched from Microsoft to Sony for this console generation, I’m sure to get plenty more. Never stop being you, Glorious Nippon.

Oh, and apparently there was a holiday too. Ionno.

LittleBigPlanet 3 Nanners 7:00 Nanashi707 Nanners will be playing at any time between 7 and 3AM so message him and he’ll jump in.

The Last Of Us: Remastered Nanners 9:00 Nanashi707 Be sure to buy all the hats and death animations to support starving indie devs!

Assassins Creed 4: The One That Works Nanners 1:00 AM Nanashi707 Hot pirate on pirate action!