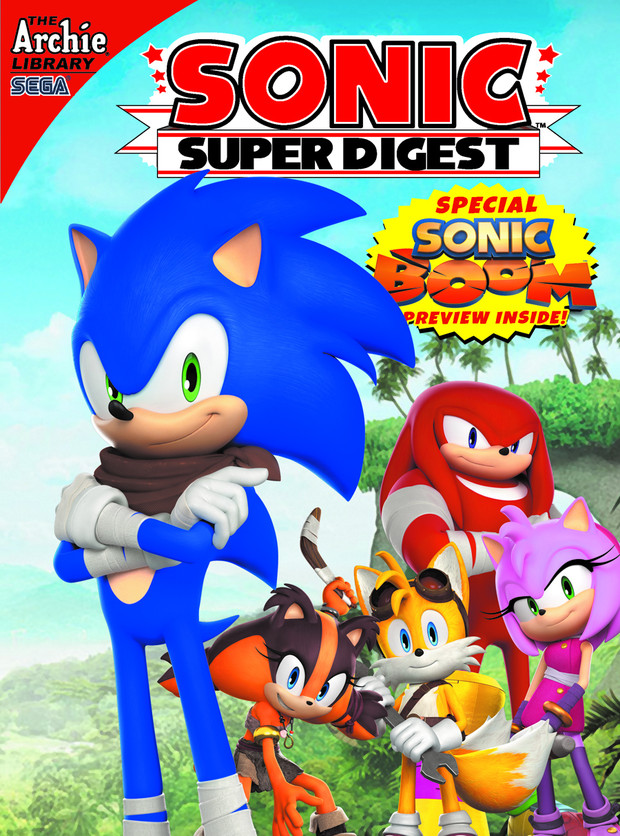 Two sets of Sonic comics, two Sonic Digests. Possibly three now that there’s Sonic Boom as well. Only problem being with this one it’s mainly a recap, only one comic I haven’t read and after doing some research it’s a recap most of the time with an occasional new story. So… not quite sure what the points of these are but they’re here, and I do enjoy Sonic. But this issue continues on the Bunny story that was here in the previous Sonic Super Digest which wraps up, Sonic and Bunny fake fight so they can destroy the refinery but eventually both sides figure it out and interrupt them from doing any more damage. They all fight Sonic and Bunny win and they go off on their own way, with Bunny being sad she couldn’t see her uncle for longer and that they’re enemies. 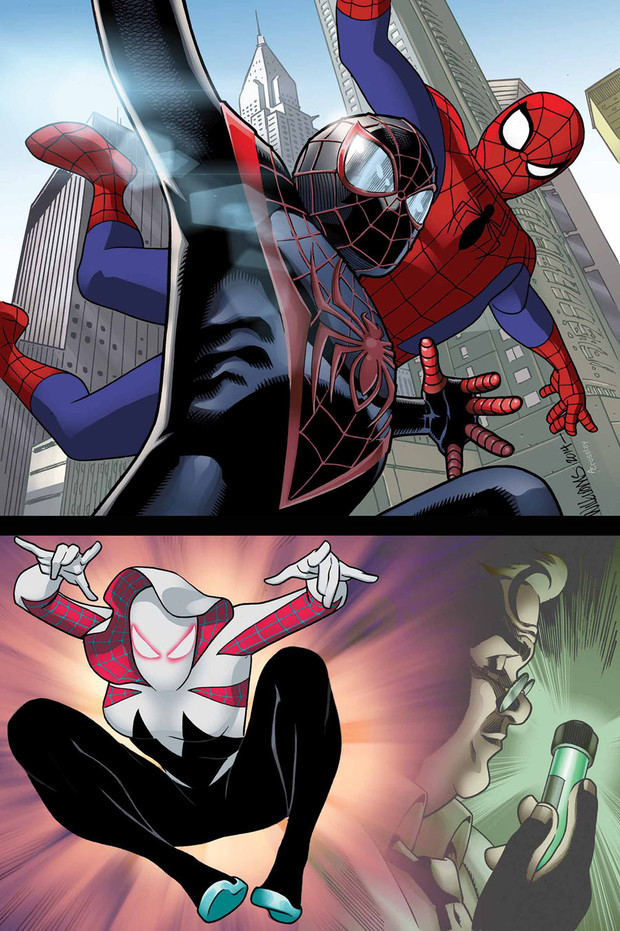 We have a few Spider-Verse Team-Up’s again; the first one was hilarious since it featured the 1960’s Spider-Man cartoon as its own universe so we’ll get to see more of him which is always great. I’m hoping he looks like himself once they get out of his universe since the other two Spider-Men looked like how they would in 60’s as well. Or looked more so like him. For the second one we have a Peter Parker that was driven to grief and insanity over having accidentally killed Gwen all those years ago and went on a murderous rampage of killing all of Spider-Man’s villains and then becoming a Green Goblin of sorts. I wish they had more time to explain this since it seems there’s a lot of background story but… Spider-Woman/Gwen tries to recruit him, he dies saving Gwen so we won’t happen to get anymore story about that sadly. 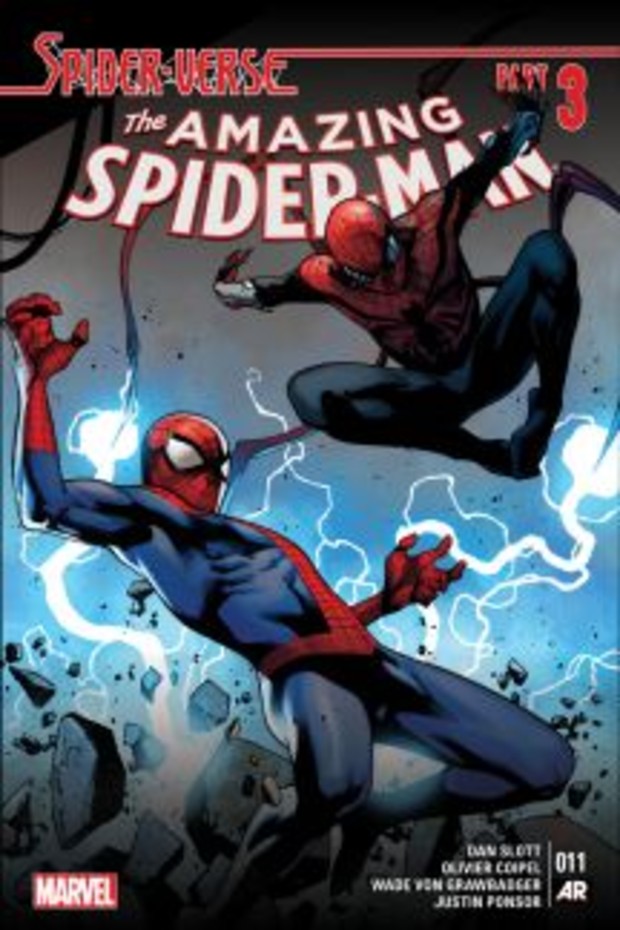 So in this one we have Superior Spider-Man and amazing Spider-Man facing off against one another to show whom is the better responsible at leading the group. It beings splitting off showing us things that start Spider-Verse Team-Up and Scarlet Spiders, giving a brief telling of what they’ve been doing for whom hasn’t been buying each issue. However the problem being that doesn’t matter, the big bad of the family that’s been hunting comes along and wrecks them. Solus comes and just destroys the strongest Spider-Man they had. However, Peter Parker is off doing other things while this is going on so he can’t help since it seems like he does happen to have a plan how to handle this. Spider-Girl’s baby brother is taken however, since it would appear he is the Scion. One of the three that is needed for whatever Solus’s family has planned. 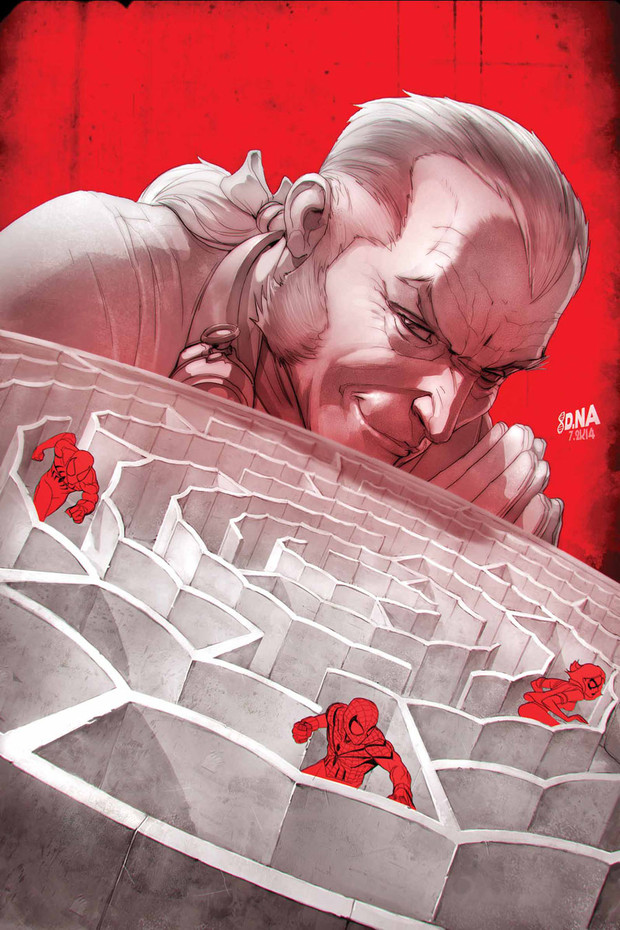 We continue on with the cloned Spider people attempting to take out the clones of Solus’s family, so that when they die they can’t come back any more. First off they beat up Johnny Storm since it seems like nearly everyone is working for them, and it makes sense Storm would be here anyways since it is the Baxter Building that the Fantastic Four use. They continue on into it with the Scarlet Spider dwelling on his life and what’s going on here as they find the clones and try to figure out how to unplug all the thousands of backup clones. We also find out they’ve been trying to clone Spiders since they could farm them similarly to how we do cows in life. But they’ve never been quite successful in it. However since the people attacking are clones themselves that does set up a problem since he’ll be trying to clone the clones since they do have the essence of a spider. 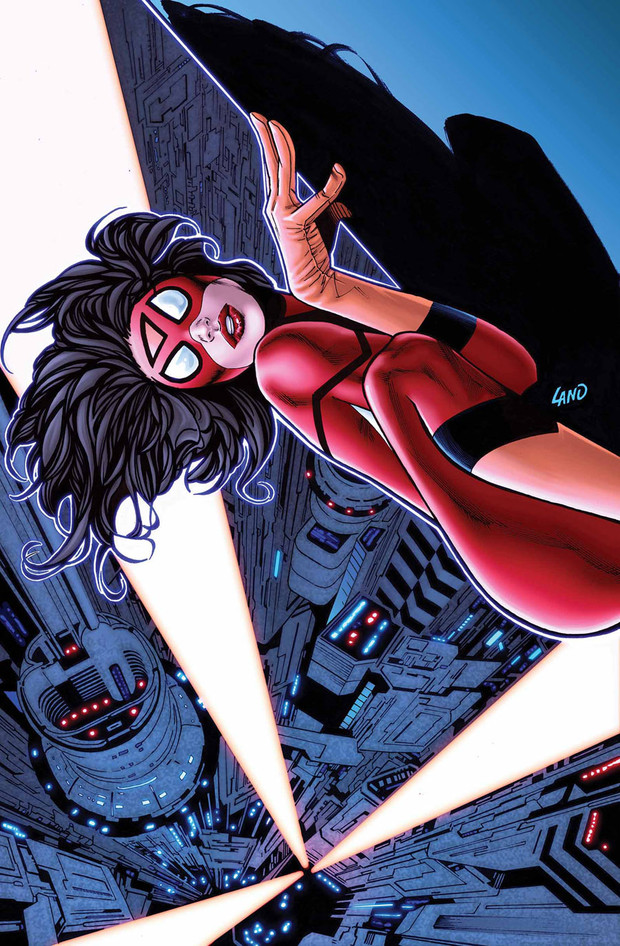 In this one we’re still in the world of Loom World, where the Scarlet Spiders currently are, only thing is they don’t know each other is here yet. I’m thinking that eventually they’ll know however and need to team up to get out of Loom World safely. We find that Spider-Woman’s counterpart whom is not a totem is working for The Inheritors, which she doesn’t much like but she keeps herself quiet and follows her counterpart around. Until Silk teleports in that is and almost gets herself killed until Spider-Woman saves her. Silk kind of makes a lot of messes unintentionally, but at the same time she is probably the most inexperienced since she was in a vault for a long, long time. However… she does inadvertently find out that one of the worlds The Inheritors can’t follow on, because while it’s toxic to everyone, it’s in particular toxic to The Inheritors. So that should help down the road. 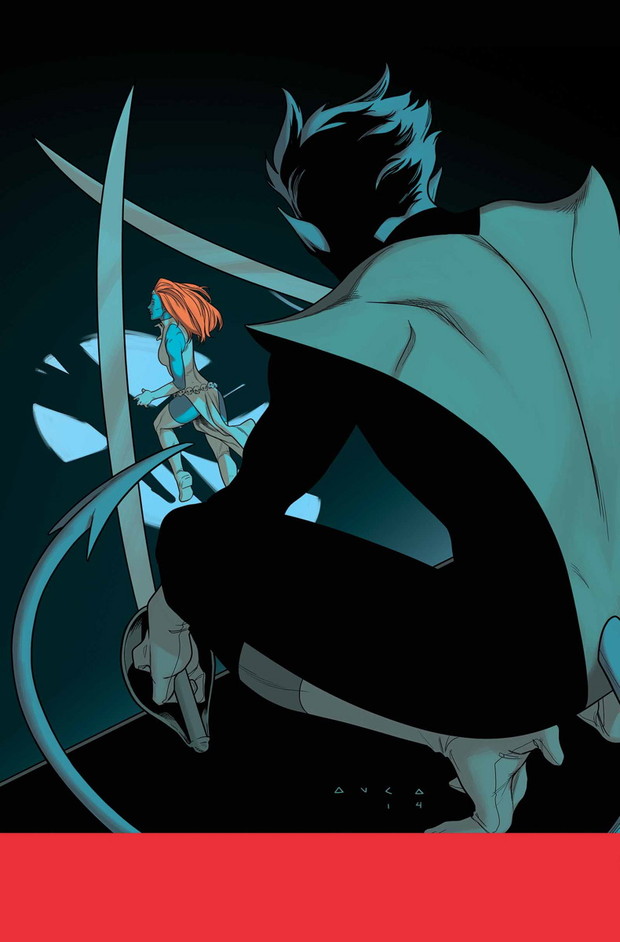 We see Nightcrawler acting evil and Mystique acting good and trying to stop Kurt from being evil. A little bit of a twist as to what’s usually happening and it has a to be continued in another series at the end. This is something I want to talk about more actually, because things like this piss me off a little bit, mainly due to the fact that it’s not a new comic. I can deal with it being a new comic; in fact I don’t mind that. It’s when it’s an ongoing series that it goes into that it bugs me, mainly because I don’t happen to know what’s been happening in the other series so I don’t know if there’s things I’ll need to know for that or not. That’s why it annoys me when it continues onto an already ongoing comic. It may be a small thing but it annoys me enough and I figured it was worth bringing up. What do you guys think about when that happens out of curiosity? But it is a little refreshing to see Mystique nice, but I don’t like that Kurt’s going evil, that may just be me however. 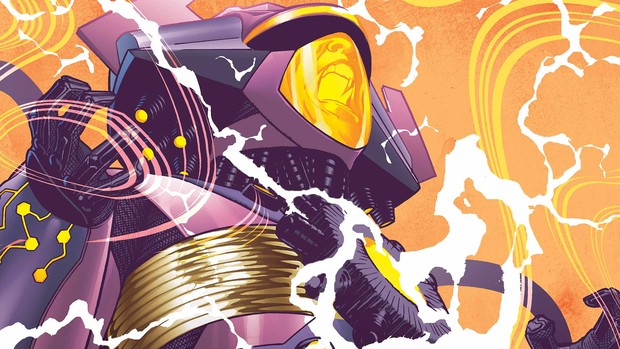 In this issue we see that Dr.Yamakaze didn’t die but somehow was made into another form due to the teleportation accident. Which means someone else may possibly be making a comeback at some point, may not as well but it’s possible. Hard to tell sometimes. We also see that Brother Eye did in fact survive much like we predicted and that he is now using Mr.Terrific’s new uSphere to spread itself to all the people, pretty much showing the future hasn’t been changed at all. Yet. But it is possible it still could since Terry is still here. We also see Frankenstein’s team finally return but they have to turn over Engineer in order to stop Brainiac before he does come for Earth. 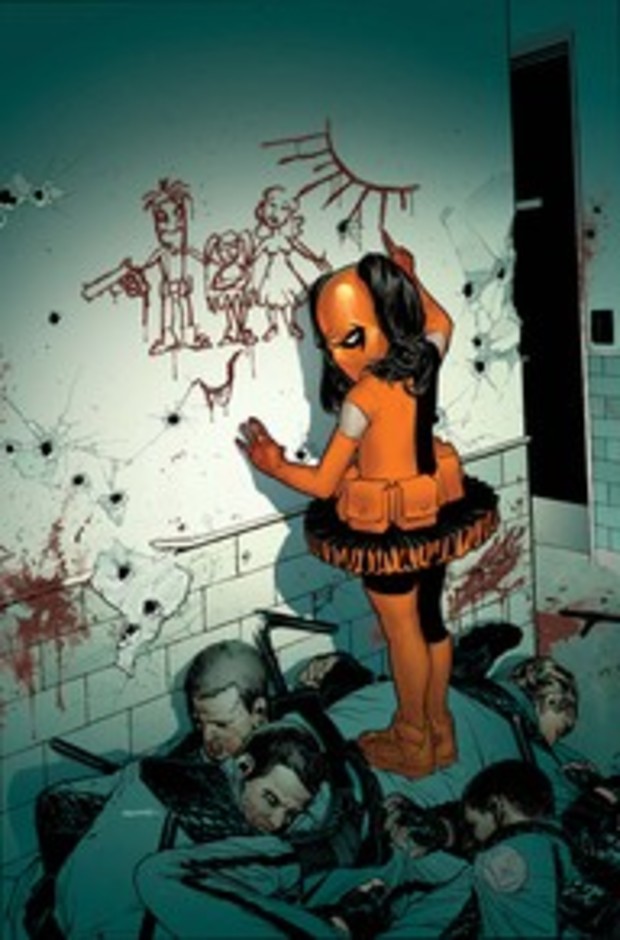 Me find out Father Time’s true form, which isn’t a small girl big surprise there and Frankenstein and team destroy most of the monsters that was sent at them. We have Fifty Sue doing things that we aren’t sure where they’ll lead quite yet , we also have Terry trying to find brother eye even though Lois said he’s dead. But they show Brother Eye using Lois’s phone to expand his reach over everything and reactivate the partially destroyed Plastique bot that was brought from the future. So that’ll cause some problems down the road. We also have Firestorm sneak back into Dr.Yamakaze’s lab while he’s there and find out he’s named himself Dr.Polaris as his villain name. 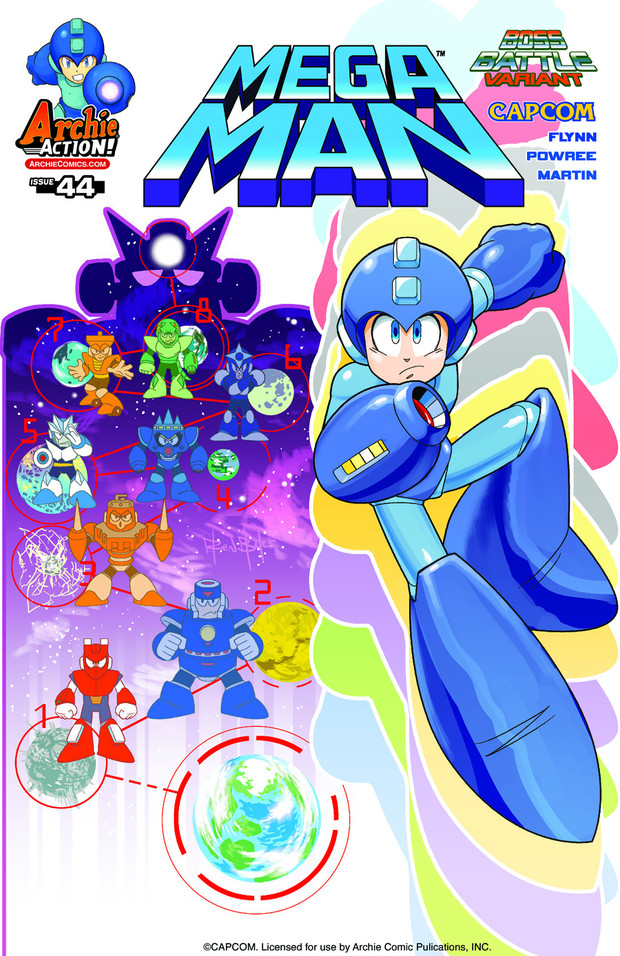 In this issue Roll finds Auto and tells Dr.Light immediately. Now Dr.Light is willing to forgive, but even he admits he knows know that it’s Dr.Wily and sets up a full lockdown so that only family members can move freely. Small problem with that, Proto Man/ Break Man is considered family still and is currently working for Dr.Wily. So with his help he can finish his Doc Robot, with the powers of the previous 8 robot masters. MegaMan also finishes Hard Man as well as Shock Man so he’s about to return to Light Labs. It is heavily implied he’ll be too late however as the next arc is called The Ultimate Betrayal. 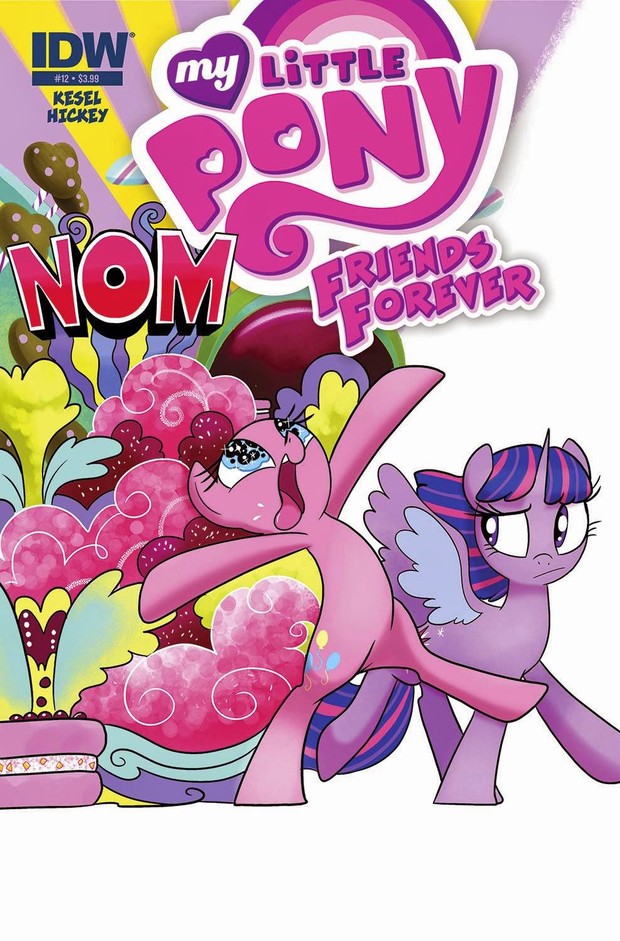 For this one it’s a classic Pinkie Pie moment everywhere (which is okay because she’s such a cutie) as Twilight Sparkle tries to help Pinkie Pie not eat the treat that even she can’t beat! Basically it’s a lot of hilarity ensuing and keeping Friendship strong, which is pretty nice actually. Aside from that the jokes are mainly visual so you’ll have to read it to get more out of it. 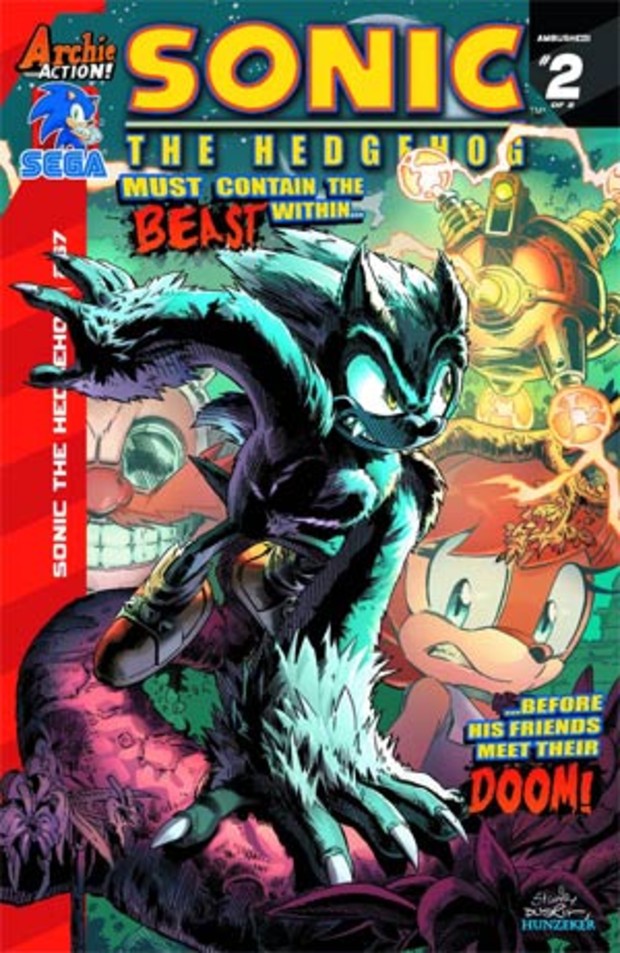 Sonic survives his ambush and wins Sally & Co… they survive but they don’t get the Chaos Emerald and end up almost either dying or possibly worse getting captured and roboticized. We also find out that Archie has decided to take the fans reactions to the Tails Doll and run with it since he is a spy for Eggman now. Living in the vents and figuring out how to sabotage them most likely. But we’re introduced to a new Hedgehog character, although it’s very brief and we technically wouldn’t know her name if they didn’t show the upcoming issue. Apparently they’ve had a backstory with her since they all groaned when they saw where the next Chaos Emerald was.