Square-Enix, the best Trolling company ever. Glad they did.

So as ya'll heard, SquareEnix had a nice presentation spot at Sony Las Vegas where they (gasp) epicly announced "FF7 4 PS4!!!", and Everyone and their Mothers got Exited (WET) beyond belief! only to be extremely disappointed beyond belief (LOL) that it was just the PC port to the PS4. . .

I seriously thank you because you haven't tarnished (possibly) the biggest Hall-of-Fame JRPG of all time. Thank you for not doing what you have done to almost all of your other series: FFT-Advanced, FF1, FF2, FF3, FF4, FF5, FF6, FF10, and all the other crapola of remakes that have been made to modern times, that has made gamers wondered, why was this sucky game EVER remade? it Sucks!

Luckily (for now) FF7 hasn't been touched, (Vita prequel doesn't count!) and still to this day remains as one of the most epic nostalgia games EVER played in our memories. If new people haven't played it? and they want to experience what you, me, and many others have from that 1990's Era, then play it as it was originally done. 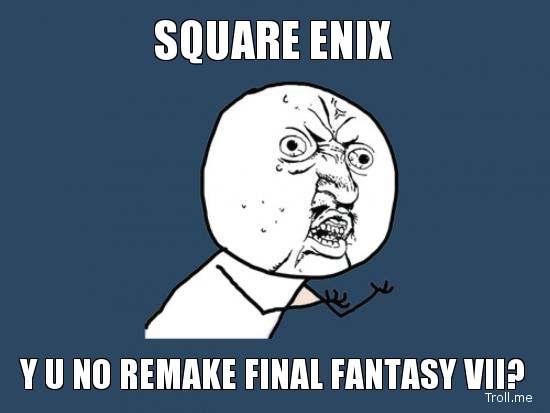 you get to play the most epic game, in the possibly best console of the 2010's, just as it was intended to be played. THE SAME WAY we all did! If you already played it and are tired of it? then GOOD, no need for you to go back to the past todays days if it bores you; Enjoy the new games coming out which you haven't played yet, if you crave FF, then reserve Type-0, FFXV, and if you can't wait, then get FF14. If you don't like ANY of the current modern FF games released, then go back to the originals and play them as intended or try some new JRPG that is out there, VanillaWare makes some kick ass JRPG's.

But please, don't cry foul for Square-Enix not remaking the most popular JRPG of all-time, and then complain that it is not the same. NOTHING is ever the same. There is a reason why remakes suck and are only meant for people who haven't played the game period. And even these people say the game sucks, so why make it in the first place to have people complain about it.