Last night I finally had the chance to see Adam Wingard's The Guest, his follow-up to last year's excellent You're Next. I had heard many positive things and read glowing reviews up front, so expectations were pretty high to say the least. Well, I must say the duo of director Adam Wingard and writer Simon Barrett are quickly becoming favorites of mine because they knocked it out of the park again with The Guest! Might be my favorite movie of the year. 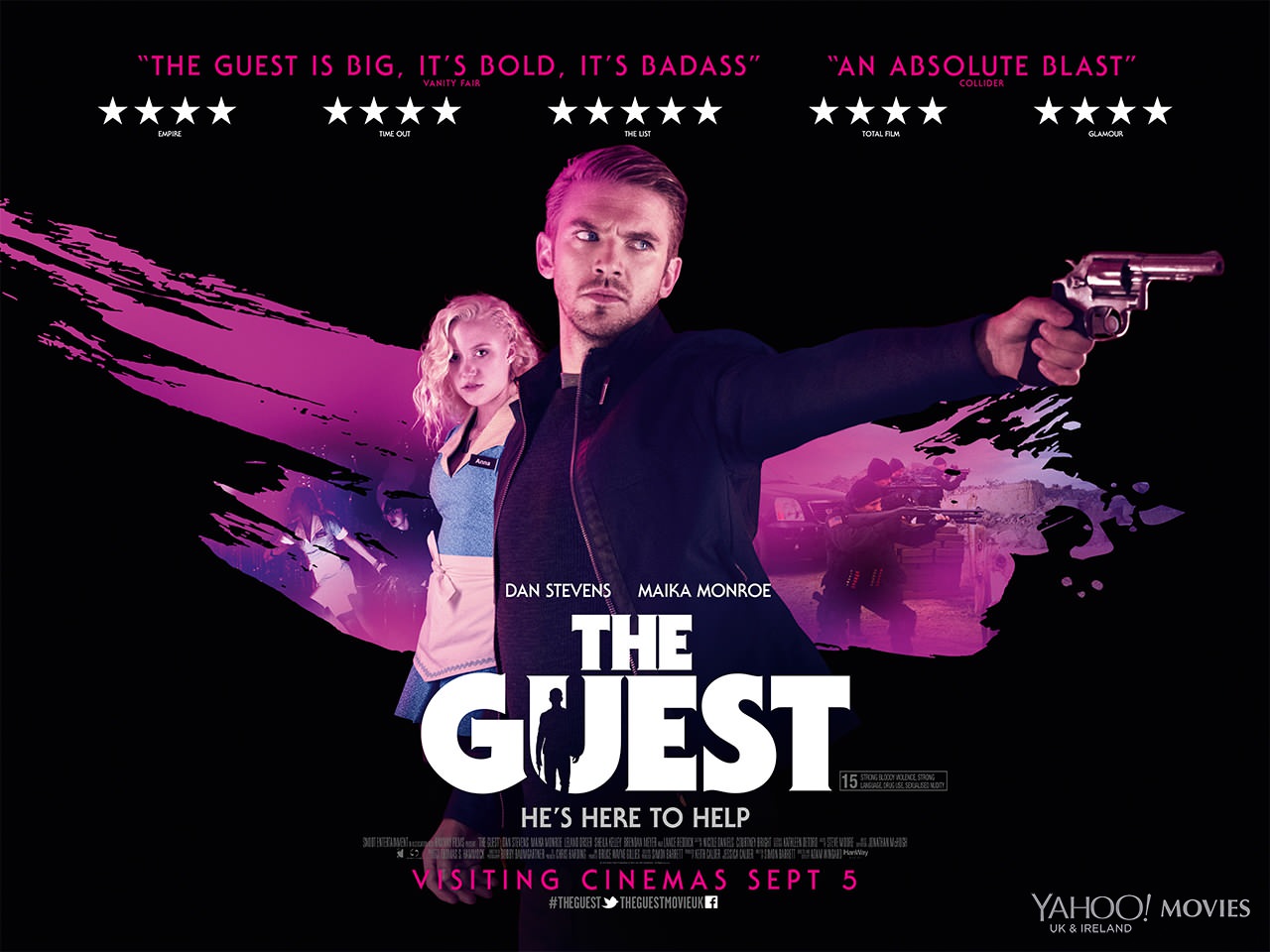 It opens with main character David (Dan Stevens), a former soldier, arriving at the home of family Peterson. The Petersons are still grieving over the death of their son Caleb, who died while serving over in the Middle East. David introduces himself as a good friend and comrade of Caleb’s who promised him on his death bed, so to speak, to tell every single one in his family that Caleb loved them very much and though of them ‘til the very end.

Out of curiosity and because David is very polite, well-spoken and seems trustworthy, he’s invited into the house by Caleb’s mom. Very quickly everybody takes a liking to David and an afternoon visit becomes a permanent stay – at least for a couple of days. Subsequently he’s bonding over drinks with the father, Spencer (Leland Orser, whom you migh recognize from Seven), going to a party with daughter Anna (Maika Monroe), and generally has an open ear for everybody’s problems. One highlight for me was how David dealt with the guys who bullied Anna’s brother, Luke. But I won’t spoil that for you.

David basically becomes everybody’s darling. The question is though, is David really who he claims to be and what are his true motives?

One of the strong points of The Guest is undoubtedly the cast, especially Dan Stevens as David and Maika Monroe as Anna. Stevens, in particular, puts on an acting clinic, one moment being charming and suave as hell, the next having this empty, menacing stare. I really hope to see more of him in the future. His incredible screen presence reminded me a lot of Ryan Gosling in Drive.

As the movie progresses Maika Monroe plays an increasingly important role, as she’s the only one slowly realizing David might not be as nice as he pretends to be… OK, I need to stop hinting at the plot right now. :)

Another strong suit of the film is its pacing in my opinion. There are no lengths or boring scenes here. Especially in the second half there are some real edge-of-your-seat moments as the tension steadily builds, culminating in some violent action and a unique set-piece finale.

Oh, and the soundtrack! The ‘80s electronica and goth really fit perfectly. More than a few times I thought to myself “This track would feel right at home in Hotline Miami”, and that’s a good thing in my book. In fact, Perturbator, the guy who made my favorite track (Miami Disco) in Hotline Miami is featured here as well. Below you can find some examples of this exquisite soundtrack which I cannot stop listening to...

There's really nothing left for me to say other than "Go see this movie!" I wholeheartedly recommend this thriller masterpiece which has been touted as The Terminator meets Halloween (there definitely are some nods to both classics). Featuring an outstanding cast, smart writing, moments of dark humour, and a memorable, action-packed ending, The Guest is not to be missed!

As always I would appreciate you guys and gals giving me your opinion. Did you love it as well or did it suck balls!? Looking forward to any responses.