Super Smash Bros. Wii U: One Day In

I've been a huge fan of Super Smash Bros. since the very beginning. I took a chance and picked up the original on the N64 the day it came out, and I've been in love with the series ever since. When the new games were announced, it was a given that I'd get at least the Wii U version, which I played all last night on my girlfriend's console. (I still won't buy a Wii U for myself, and this game highlights the reason pretty well; there will most likely be another blog dedicated solely to that.)

I'm well aware that I'm in the minority when I say that I truly thought Brawl was the best game in the series. I thought that other than the tripping mechanic, which was sloppy and unnecessary, every single aspect of Brawl was better than Melee. I went into this new game knowing that it had a lot to live up to in my mind, and while I'm still every so slightly more partial to Brawl, I'm extremely happy with how this one turned out. 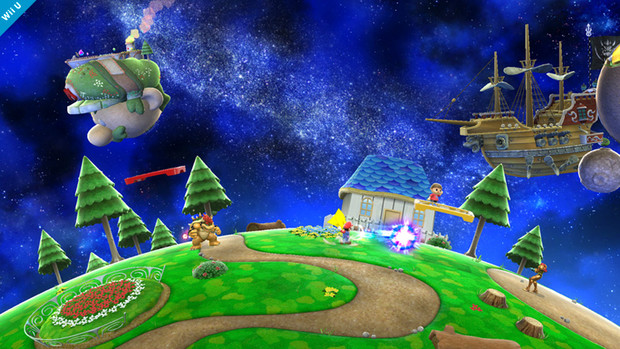 We've had HD for years, yet Nintendo HD tends to look better than anything else I've ever seen, and this game is no exception. The colors pop, the environments look like they were taken right out of their original games, and everything runs flawlessly at a never-dropping 60fps. It's a huge improvement over Brawl, which was obviously only in standard definition on the original Wii. Ironically, though, when I ran Brawl on my desktop through the Dolphin emulator just to compare the two, I was actually able to make Brawl look pretty much graphically identical to the brand-new Wii U game. Comparing them on the original hardware, though, is no contest. The level of detail in the new Super Smash Bros. is staggering, whether you're looking at the playable fighters, things far away in the background, or the entire battlefield as a whole.

Have you noticed that I have yet to refer to the Wii U title as anything other than "the new one?" There are a million different fighting-related words Nintendo could have chosen, but they chose "for 3DS" and "for Wii U" instead, which is idiotic to me; it makes it sound like the new games are remakes of the original N64 game for the 3DS and Wii U. I don't know what possessed them; did they think if they didn't put the platform in the title that we'd forget which version we're playing?

EDIT: It has been brought to my attention that the "for" in the titles ("for Wii U" and "for 3DS") is supposed to be a play on the number four, since it's the fourth title in the series. What the hell. 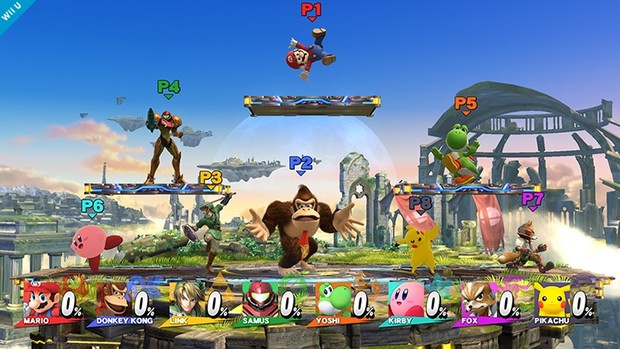 So, you can have eight people play the new Super Smash Bros. On one screen. With up to seven Wii Remotes.

When I heard about this, I didn't know what to think, but it's just so hectic and fun that I can't help but love it. I've only played with CPU fighters in this mode so far, so I can't attest to having seven friends sitting next to me just yet, but it's pretty easy to figure out how it'd go. It's the ultimate party game, which is what Super Smash Bros. has always been from the start. I only wish you could do 8-player Luigi's Mansion, all Ice Climbers with infinite curry on; that'd be a fun way to see if the console would explode or not. 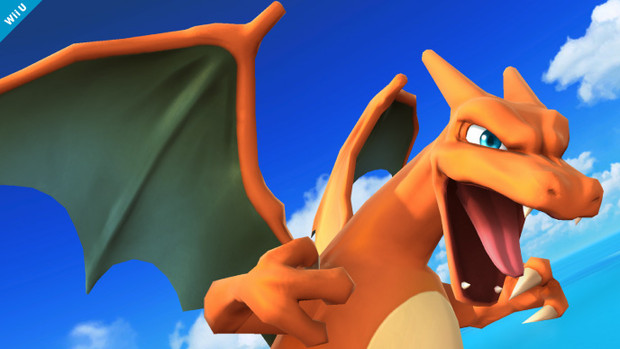 Speaking of the missing Ice Climbers, I just can't help but feel that the roster this time around is a little eh. Don't get me wrong, I like having characters like Mega Man, Little Mac, and Shulk in there, and other characters, like Pit, are completely different than they were before; I'm not hating on the actual character choice, since there are actually a bunch more this time around (althought a lot of them are just clones; Dark Pit? Was he really necessary in the slightest?). But I really miss the ability to change characters mid-battle. It's cool that they kept Zero Suit Samus and Shiek, but I liked being able to switch between them while I was fighting an opponent; it put my own skills of mastering multiple characters to the test while also forcing my opponent to change tactics to fight someone completely new.

The one that really stands out to me is Charizard, who was introduced as part of the Pokemon Trainer's original three starters in Brawl. I thought the Pokemon Trainer was one of the most unique characters I had ever seen in a fighting game, and it sucks that two-thirds of that team was eliminated. I feel like this new title has much less strategy involved, and much more outright button mashing; it seems a lot more straight forward, and I don't know how into that I am. Changing characters on a whim was a fantastic way of keeping your opponent on his/her toes, and building up your own more varied skill set, as well. 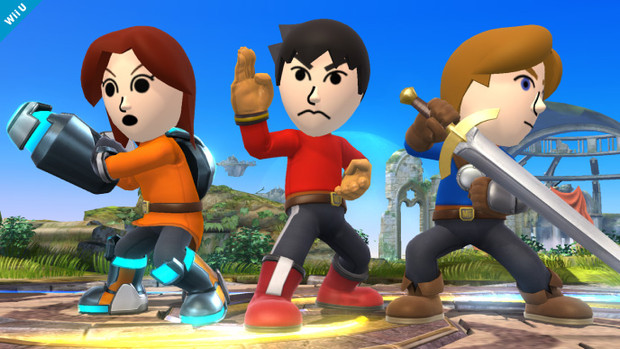 I think it's really cool that you can not only fight as your personal Mii characters, but also transfer them between the Wii U and 3DS versions of the game. Miis have always kind of fascinated me, and I think they tend to fit in well with every Nintendo-made game, despite the fact that they look even more cartoony than Mario himself. I'm a really big fan of character creation, and despite Miis being really simple and easy to make, seeing them in action is always welcome; I even remember playing as no one but my own Mii in Mario Kart Wii. That probably won't happen quite as much in this game, but it's awesome that the option is still there.

I also like the ability to customize the built-in Nintendo characters. The Super Smash Bros. series has always been so varied the second you start a match, and being able to take what's already there and tweak it adds a completely new dynamic to the game and increases it's already huge lifespan.

In Brawl, you had one single loading screen in the beginning of the game, and then you never saw it again. I have no idea why that same thing wasn't kept for this iteration, but it really does take me out of the mood when I feel like I actually have enough time in between matches that I can put the controller down. After a game that had instant transitions, shouldn't the newer game on the more powerful hardware be able to do the same thing? It's a little staggering that loading screens even exist in this game, let alone how many of them there are.

EDIT: After getting the Wii U online and downloading an update for the game, it seems like the loading screens have at least been shortened. They're much more bearable now, but it still kind of sucks that they exist. Brawl majorly spoiled me in that regard.

Anyway, there are my two cents. I love this series so much, and I'm super excited that we're finally able to enjoy a new one. While Brawl will always hold a special place in my heart, it's nice to start from square one again, rehoning my skills that have no doubt gotten rusty over the years. And hey, maybe online play will work well enough this time that I'll actually want to utilize it more than once!