Ah, Metal Gear, one of gaming’s longest running and most celebrated franchises. What began as a simple 8 bit game on the MSX has evolved into an expansive and flagship series under the direction of Hideo Kojima, with millions of copies sold and one of the longest and arguably most convoluted stories in gaming. The stealth action is second to none, with solid mechanics and inventive gameplay. One of the key reasons why I think Metal Gear is as great a series as it is has to do with the fantastic soundtracks that accompany every game. The series theme is one of the most recognizable in all of gaming and the series utilizes top talent to head its sound direction. But, today I want to go into detail about one of my favorite aspects of Metal Gear’s soundtracks: the vocal tracks that accompany most games.

The vocal tracks in Metal Gear that either start off the game or scroll with the credits are much like the games themselves: they can be bombastic and fast-paced, emotional and meditative, and downright cheesy and tongue in cheek. As a heads up, I haven’t played Portable Ops, Ground Zeroes, or Metal Gear Rising: Revengeance, so I can’t really comment on the role of music in those games and thus won’t be including them. As another heads up, there will be spoilers for the plots of some of the games and how they tie into the vocal tracks, so if you want to go into these games will a blank-slate, I would suggest putting off reading this until later.

Metal Gear Solid: The Best is Yet to Come

Starting off is the first vocal track in the entire series and probably my favorite on this list. So much about this song is fantastic. The song starts off simply enough, with a solo female vocalist singing in Irish. This song is actually the first you hear in the entire game, but only the first few seconds before shifting into an instrumental track. When I finished this game for the first time and heard this play over the credits, I couldn’t help but smile. The ending just made me happy. After going through a roller coaster ride of a game, everything ended upbeat and the plot threads were satisfactorily tied up. As long as you saved Meryl, I think this is one of the only games in the series that has a genuinely happy ending. Good prevailed and won in the end. After battling with his genetics the entire game and learning his fate is already predetermined, Snake decides to live his life to the fullest, making the most of the time he has left. For Snake, you truly believe that the best is yet to come.

The song is upbeat and, after an initial slow start, breaks into a melody that is primarily carried by the fantastic vocal arrangement. I didn’t understand any of the words when I heard this song the first time, but it carried so much energy that you couldn’t help but be excited for whatever came next in the series.

Ah, smooth jazz. This song is chilled and relaxing. What starts off with solo piano transitions into a big band style; everything sounds just right. In contrast to the first vocal track in Metal Gear Solid, which has so much hope for the future, this song is meditative and introspective, filled with questions of the past in the face of a confusing and undetermined future. As to how this song relates to the game, I’m going to give a few ideas, but nothing concrete. Sons of Liberty was the most confusing game in the series for me and the last hour or so was a bit of a weird blur to me. I remember being a naked Raiden somersaulting around, then everything got intense. However, I think this song is a study of sorts of Raiden. He can’t let go of the past and can’t forget the things that have happened to him. At the end of the game, he is at a crossroads in his life and doesn’t know where to turn next. After acting the puppet for the Patriots and growing up as a child soldier, his life is his to live now, a scary and unique proposition.

Man, what a way to start off a game. I went into the game not knowing what to expect and was immediately met with one of the coolest openings in video game history. Snake Eater sounds perfectly at home in the opening to a James Bond film and the opening certainly reflects this style, showing Naked Snake defeating enemies and looking wicked cool doing it. The vocals are perfect, the backing orchestra is fantastic and sounds appropriate to the era from the game, and the rhythm guitar sounds soooo nice. 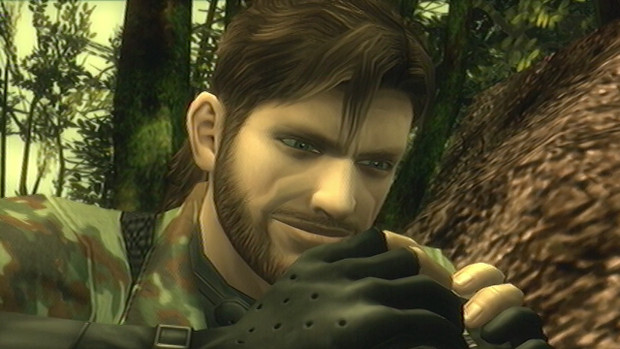 My face when hearing this song.

With this kind of opening, you feel ready to take on the challenges of the game, ready to embark on a grand adventure. Yet, the opening is not the only time you hear this song in the game. While climbing what must be the tallest ladder in history, you are treated to a scaled-down version of the song, with only the vocals present. Either accompanied by a full orchestra or with vocals alone, this song sounds so good. It is loud, bombastic, and cheesy, much like the game itself.

Playing over the final credits, this song is a tonal opposite to the energy and soul of Snake Eater. While Naked Snake, now Big Boss, has emerged victorious from his battle, it has come at a great price to himself. Not only did he lose his eye and endure physical torture, he lost his mentor, the woman who essentially raised him, by his own hand. The wailing vocals of this song’s chorus are a perfect reflection of the storm inside Big Boss, as he has lost so much. For the only time in the game, Big Boss sheds a single tear at The Boss’ grave. Considering this game is a prequel and chronologically the first in the series, we already know what will happen to Big Boss and the road he will take, transforming into the series villain. As the song laments, he has a way to fall and this is only the beginning.

This is a depressing game. The world has fallen into chaos and Snake has prematurely aged, soon to die. You can hear the pain and quiet intensity in the vocals, even if you are not familiar with Hebrew (I’m not). Much of the song just feels empty, like there’s some element lacking that you can’t quite name. When looking up the lyrics, it just expounds on the sadness you can already feel in the song. The vocalist sings of despair, loss, and longing for the past, singing that she is “missing so much it hurts.” This song is littered in parts throughout the game, with pieces of it heard at the opening to each act. With the soulful wailing, you get the feeling that things will not end well in game’s end, that the world is too far gone to affect in a meaningful way.

Metal Gear Solid 4: Guns of the Patriots: Here’s to You

Playing over the credits is a fantastic Ennio Morricone composition retooled to a slower, more meditative arrangement. Though it marks the end of Solid Snake, it is a worthy tribute. Though bittersweet, there is hope for the future, for a world freed from control of the Patriots. Though the world doesn’t need any more snakes, this song gives our favorite one last, thoughtful tribute.

I haven’t actually beaten this game yet. I’m only a few hours into it and have just gotten things up to speed. Yet, I have already heard this song and think it is great. Like the ending song to Snake Eater, this track is somewhat sad, despite its upbeat tune. In the lyrics, you can hear of Big Boss’ struggle to still do the right thing, to make his mark on the world. However, you can still taste the pain and bitterness of previous losses in the lyrics, threatening to overcome all his best efforts.

Metal Gear Solid 5: The Phantom Pain: Sins of the Father

I realize that this game is not yet out, but I couldn’t pass up this great song, which serves as the theme to the game. Half of the song is soft and meditative, with a soft piano and light strings playing and subdued vocals pining away. Big Boss has lost so much and his dream has been destroyed before his very eyes. His right-hand man and good friend has been captured and MSF has been betrayed. Nine years of his life were stolen from him along with his left hand.

Halfway through, the song shifts after building up tension. The singer wails and mourns the man Big Boss has become as he spirals down into hatred and revenge. There is nothing that can be done for him; his course is set. “In my heart I just know that there’s no way to light up the dark in his eyes.” Big Boss has been too wounded by the world to turn away from his descent into revenge. The phantom pain not only refers to the physical parts of the body that have been lost, but perhaps more importantly to the mental anguish of loss. Big Boss’ band of mercenaries, the men who trusted him and looked up to him, have been completely wiped out. In what started it all, he killed his mentor himself to stop global war. There’s only so much a man can lose before becoming a demon.