Video games are supposed to be about fun. Playing one is supposed to bring you joy, provide an area where you can utilize your hand-eye coordination and generally act as the lone bright spot in an otherwise banal life. But recently, my time spent with video games, particularly one video game, has crossed a line I didn’t know existed. I am no longer comfortable playing a game thanks to the actions of one video game character; a character I thought that I could trust, that I could be safe around. It’s clear that is not the case. This character, one that I have known for years, has been directing unwanted sexual advances towards me and it’s time for that to stop. That character is Cat Peach.

Our relationship started out innocent enough. I took Cat Peach on a tour of Sprixie Kingdom, conquered some lands and defeated Bowser. Everything was strictly platonic and I was fine with that. Unfortunately, it seems Cat Peach was not and nowhere is that more obvious than in Mario Kart 8. Race after race, jump after jump, this once pure princess offers up her hind quarters to me, begging me to take her right then and there.

Mario Kart 8 used to be the one big joy in my life, allowing me to take on racers from around the world. But now it’s a constant barrage of erotic proposals from a woman who is supposed to represent dignity and class. Seeing her lift her tail, pleading for me to punish her like the bad kitty she is turns a game that should be about friendly competition into nothing less than pornography. I can’t pay attention to the task at hand, to the curves and bumps of the track when I’m forced to gaze at the curves and bumps of Cat Peach’s body when it comes flying out of the kart, her legs spreading as she looks back with an expression that screams “Give it to me! Oh God give it to me harder. I need it so fucking bad!” 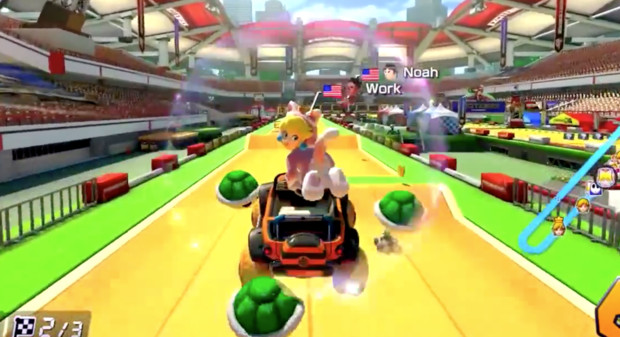 Mario Kart is a game that is supposed to be fun for all ages. For the most part, it is as other characters keep their actions in the game PG. But as long as Cat Peach is a part of the line-up, enticing me with her constant purring and tasteless poses, I can no longer play. I pray that Cat Peach is able to find whatever sexual satisfaction she seeks from another player because it won’t come from me. Today, I put my foot down and tell Cat Peach no means no.