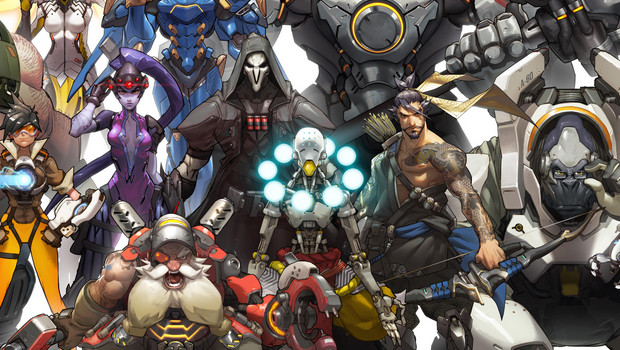 I’m not sure how I feel about Overwatch, Blizzard’s recently announced take on squad-based shooters. On the one hand, Blizzard knows how to craft a compelling IP, and if the playfully corny, Pixar-esque cinematic trailer is any indication, then the company’s spin on Team Fortress will at the very least have plenty of personality. And considering this is their first franchise in seventeen years, it’s exciting to see them tackle a project that isn’t Warcraft, Starcraft, Diablo, or some kind of combination thereof.

On the other hand, I’m a hot mess when it comes to tactical shooters. As a gamer raised on consoles, teamwork is a foreign experience for me. The explicit lack of a deathmatch mode means the most I can hope to ever get out of Overwatch is fifteen minutes of miserable failure, all while being yelled at by more experienced strangers for sucking at something I never played before.

But my opinion of the game itself isn’t what matters right now. What matters is getting in there and being the first to establish a hierarchy for Overwatch’s cast of international Super Friends. Because this is the Internet, baby, and there’s nothing we can’t distill down to a few basic components to be ranked in a superficial and meaningless list, and that includes videogames that haven’t even released yet. Hell, especially videogames that haven’t even released yet.

So, using nothing but kneejerk reactions and roughly twenty minutes of actual gameplay footage, I present to you... 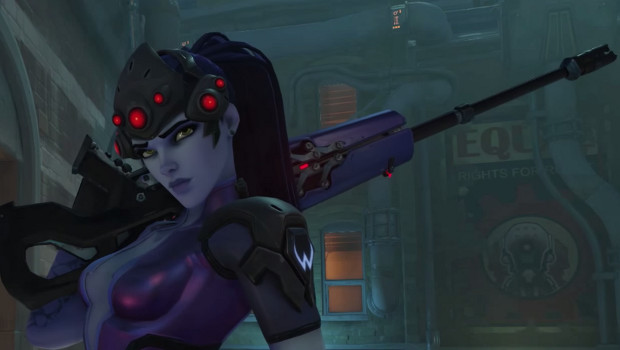 Allow me, if you will, to imagine the creative process that produced Widowmaker:

Director: [Smoking a cigar] Alright, you bums. We need a gimmick for our sniper character. What d’you got?

Designer #1: Well, I was thinking maybe some kind of cyborg cowboy that –

Designer #3: What if we do a sort of alien hitman who –

Designer #4: ... what if we turned sideboob into a character?

[An awed silence falls over the room. The director’s face lights up like a man who has seen the face of God. His eyes fill with joyous tears.]

Director: You magnificent son of a bitch. 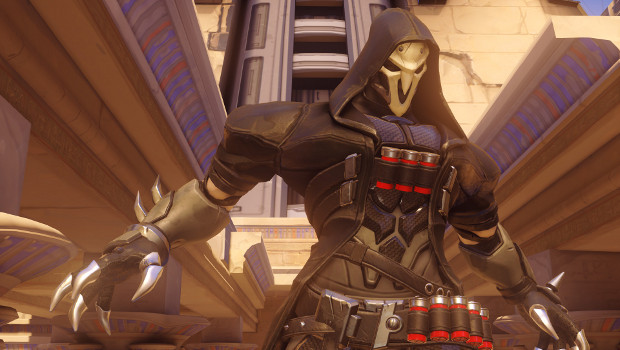 I’m not sure how a character like Reaper gets made in the year 2014. He looks like he escaped straight out of the pages of a middle schooler’s notebook circa 1996. He wears a trench coat with a hood. His face is hidden behind a skull mask. He’s always talking about death. He fucking bleeds shadows.

Countless character concepts were no doubt rejected during the game’s development, so I want to know how Skeletor’s manic depressive cousin managed to crawl out of the discard pile.

Admittedly, the duel shotguns are cool, but I don’t want to give them too much credit because they’re probably powered by darkness, or the terrible poems he wrote when his girlfriend left him, or the tears of everyone who’s ever watched the opening montage of Up. 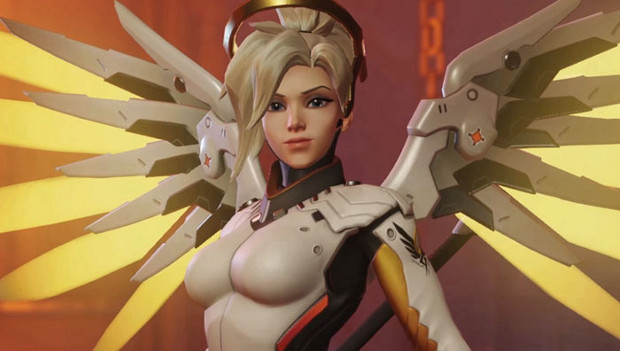 We’re only on the third entry, but I think we’ve already established that Overwatch’s combatants aren’t the subtlest bunch. But even so, a healer character named Mercy? Who has angel wings and a halo? I’m sorry, but I’ve watched YouTube fail compilations with more nuance than that. Literally, videos of skateboarders falling face first into handrails that have contained more breadth and artistic complexity than ol’ Touched by an Angel over here.

Religious and cultural imagery are incorporated into a few of the other fighters, so obviously Judeo-Christianity has to get its shot in, but the end result is inevitably the most boring, white bread member of the roster. 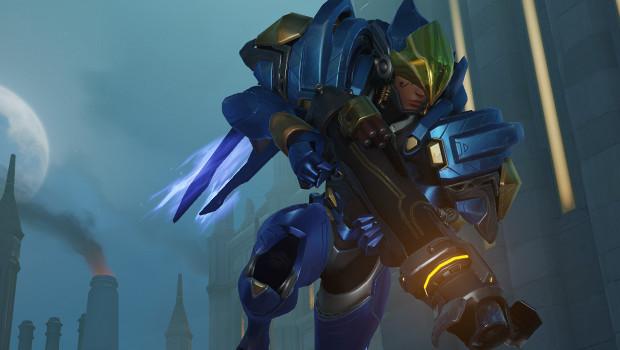 Pharah is the blue one. 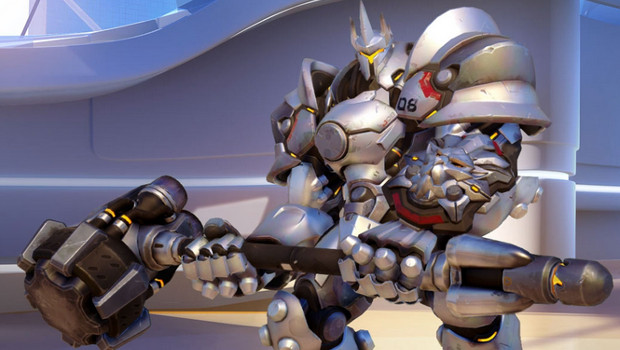 Reinhardt is the token heavy. He’s Overwatch’s Zangief, its Potemkin, its... Heavy. His job is to be a big, slow, and powerful package all wrapped up in an Easten European accent.

While I’m docking the power armored Kraut originality points for fitting a very typical mold, I do appreciate the selection of a rocket-powered hammer as his weapon of choice. I can get behind any guy who models his fighting style after King Dedede.

Plus, the lion crest on his arm sort of makes him look like a ‘roided up Voltron, so he has that going for him. 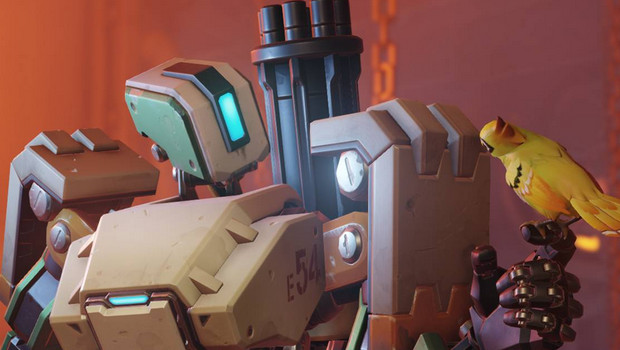 Bastion’s a good middle-of-the-pack character not only because the sensitive battlebot represents the tenuous crossroad between humanity and technology, but also the crossroad between a concept I sort of love and sort of hate.

On the plus side, everybody likes a robot with feelings. Wall-E, Johnny Five, R2-D2 and C3PO – there’s nothing audiences eat up more than a heartless machine that thinks it’s people.

But they imbued Bastion with a personality in the laziest way imaginable. It’s like they spent five minutes brainstorming ways for players to connect with the one class that’s just a walking gun, settled on “Eh, he likes nature or some shit,” and called it a day.

If game designers are going to go the sympathetic droid route, they’re going to have to try harder than “doesn’t immediately crush a small bird in its steel death grip,” because a glorified trash compactor already taught the world how to love again. 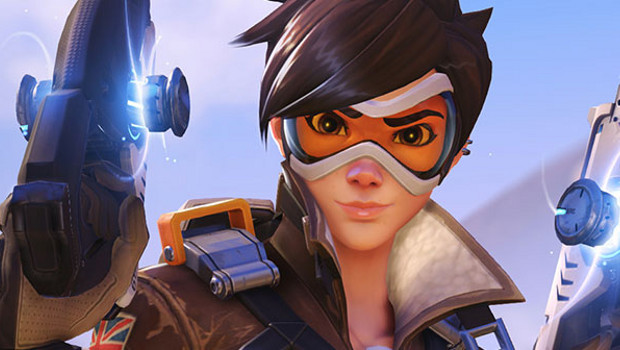 Tracer is the cheeky one, which you can tell because her personality boils down to “has an English accent and a pixie cut.” And while the game’s trailer saddled her with an insufferable catchphrase, I’m willing to withstand a thousand shrill cries of “The cavalry’s ‘ere!” because Tracer looks so much fun to actually play.

She’s Overwatch’s Scout, focusing on speed and offense. While the Scout favors the savage thrill of bonking people with a baseball bat, Tracer prefers that most exquisitely humiliating of first-person shooter weapons: the sticky grenade. There’s nothing more embarrassing than getting stuck by a sticky grenade. It’s like getting food on your face at a fancy dinner party, only your face explodes as soon as someone points it out to you.

Being able to blink in, slap someone with a pulse bomb, and blink out is a rich, multilayered sort of pleasure that no number of irritating catchphrases can ruin. 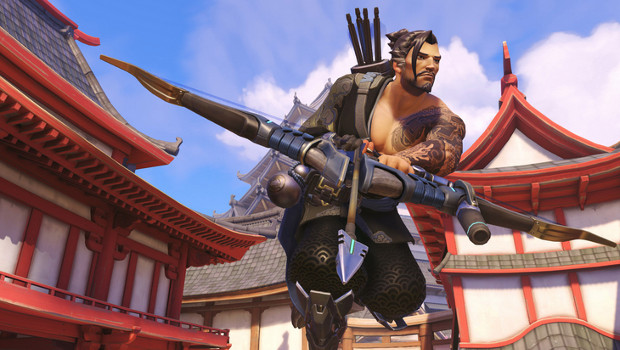 The Hunger Games franchise has made bows and arrows cool again, so naturally there’s a member of Overwatch’s coterie of gun-toting mercenaries that’s repping the archaic – yet currently in vogue – instrument of death. Though, Hanzo is the stoic, semi-shirtless badass of the bunch, so maybe he’s just above something as dishonorable as using bullets.

He’s essentially the guy bringing a knife to a gunfight, which is usually frowned upon, but I’ve never bought into the philosophy that the opponent with the primitive stabbing tool is the one at a disadvantage. The one with the knife or bow and arrow or spear is the one you want to run the hell away from, because that dude straight up does not give a fuck. He knows he’s going to murder his enemies no matter what they use against him. And as you can see from his gameplay video, the wall-scampering assassin is a Legolas-level death-dealing machine.

And honestly, what kind of list would this be if the ability to shoot dragons didn’t at least break you into the top five? 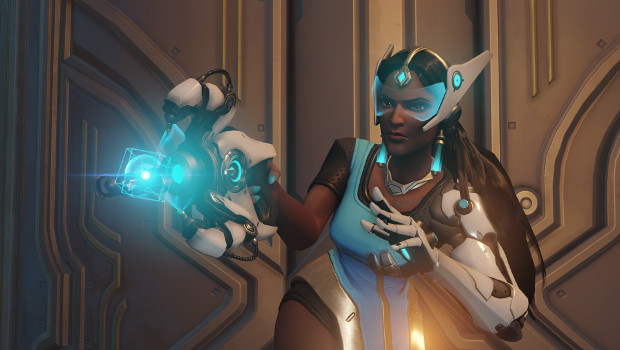 Symmetra earns her high ranking because she’s one of Overwatch’s few wholly original creations. While the others on this list fit typical roles or utilize ideas that have already been seen elsewhere, an Indian architect who bends reality and provides portal support can’t be so easily put into a box.

Honestly, I think Overwatch could have avoided a lot of the unfavorable Team Fortress 2 comparisons if more of its characters were like Symmetra. Understandably, a game like this needs its standard classes – its snipers, its heavies, its healers. But Team Fortress 2 already took those roles and turned them into living, breathing personalities. If you’re going to do a squad-based shooter now, then you have to do something different than what Valve did, and Symmetra proves that the capacity for repackaging typical characters into new and compelling creations was there, but not necessarily applied to everyone.

Still, if sideboobs and angsty shadow bros are the price we must pay for the faintest hint of progressiveness and innovation, then at least we got one ass-kicking lady scientist out of the deal. 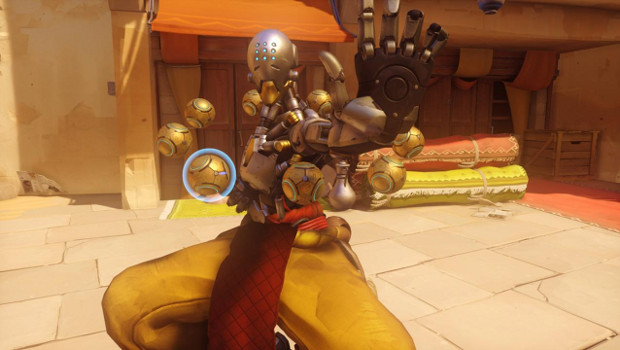 Zenyatta slightly edges out Symmetra as Overwatch’s most interesting fighter, mostly on the strength of his unique “killer Tibetan monk robot” hook. Sure, it doesn’t make a lot of sense that a self-aware machine that spouts pseudo-Buddhist nonsense would float around slaughtering people with spirit orbs, but maybe Zenyatta’s personal concept of transcendence just involves transcending a phantasmal sphere straight into someone’s skull. And Lord knows I’m in no position to begrudge anyone their beliefs.

But incongruent phisosophies aside, just look at him! He looks so cool! He floats around in an unflappable yoga pose – coasting along purely on what I assume are good vibes – and enlightens the masses by pelting them with balls at dangerously high velocities. If Jehova’s Witnesses adopted that sort of conversion method, I think they’d be a lot more effective at spreading the good news. 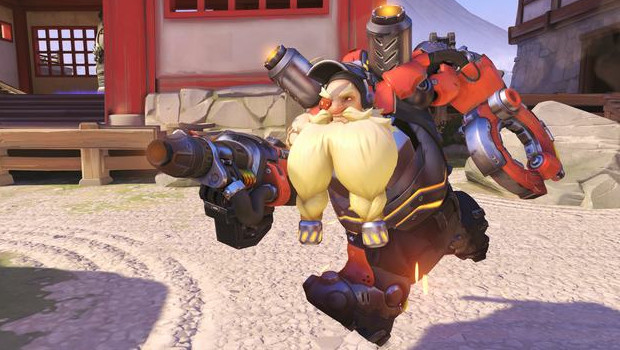 If you’ve made it this far and haven’t already realized that this ranking is based upon the most suspect of criteria, then let me make that fact explicit for you: Torbjörn is the second-best Overwatch character because I love his name.

The whole Viking engineer angle certainly boosts his appeal, but really, it’s all about that name. I don’t even know if I’m pronouncing it correctly, but I don’t care, because the way I think I’m pronouncing it is awesome. Torbjörn! It’s like the name of the party animal character in a Scandinavian ‘80s frat movie. He’s the one who chugs the keg the fastest in the keg-chugging contest that saves the Alpha Delta Ragnarök house from expulsion. Torbjörn!

Engineer classes aren’t my thing, but I’ll play this guy just for the privilege of yelling his name every time I score a kill. Torbjörn! 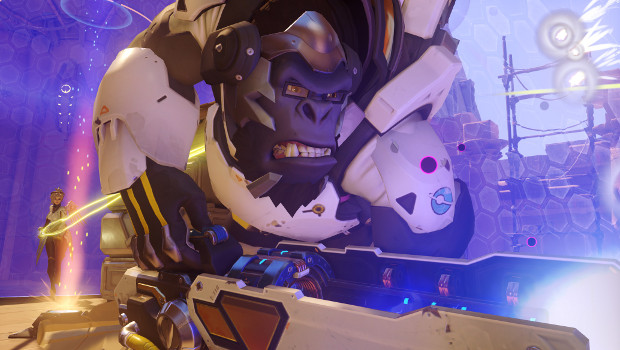 A hyper intelligent primate who can talk isn’t exactly groundbreaking. If I recall correctly, there was already that entire planet full of them. But there’s no questioning the sheer majesty of a bespectacled gorilla in a battlesuit. He’s the perfect blend of sophistication and raw, primal brutality. With those glasses and a yuppie name like Winston, you know he’s as capable of discussing Chaucer over fine wine as he is of ripping out your throat if you make eye contact with him.

Now feel free to offer your own rankings in the comments! So long as you understand that your opinions are inherently wrong, because I established my ranking first, and thereby my word is law.