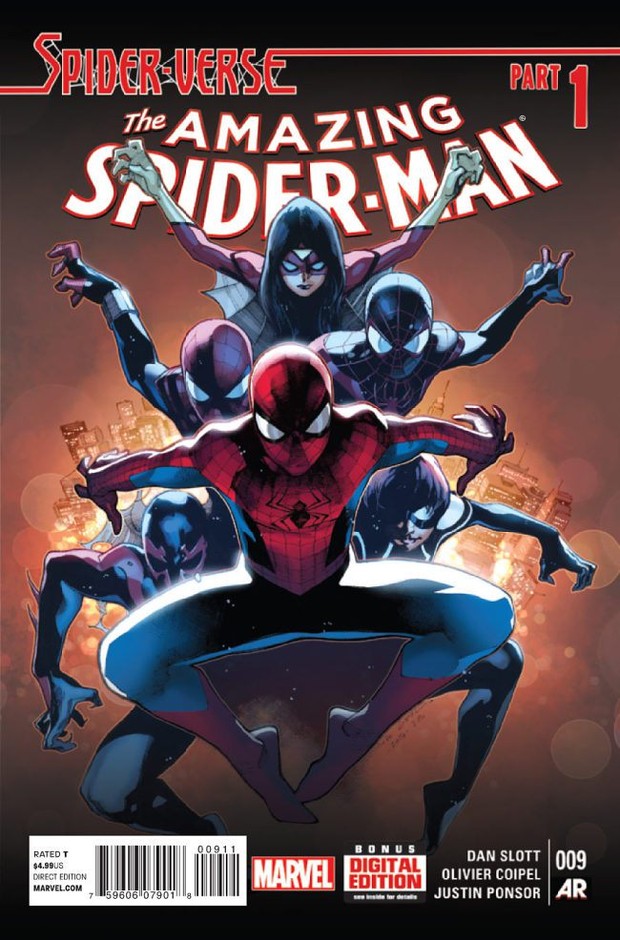 The Amazing Spider-Man 009:
So with 009 we actually start Spider-Verse, it’s not just side stories anymore it’s a full on story getting Peter Parker involved. There’s Spider people that are new and old, along with some that are versions of Peter where things didn’t happen to him or he kept things. Some aren’t Peter as well, it’s a little confusing but in the end it’s interesting to see all the different Spider People.
So the story kicks into full gear, with Peter Parker being recruited into the rest of the group, they save Scarlet Spider from dying but lose Bruce Banner (who was Spider-Man instead of Hulk in a timeline?) and go back to their headquarters. We actually don’t learn to much about them these time, but do happen to get some more insight into Morlun’s family, not much more but a little bit and see how they interact with them all. We also see more of the Great Weaver (whom I’m not familiar with at this point but I’m sure we’ll learn more of) and how he is now forced to help Morlun’s family find other Spider-People to feast upon. 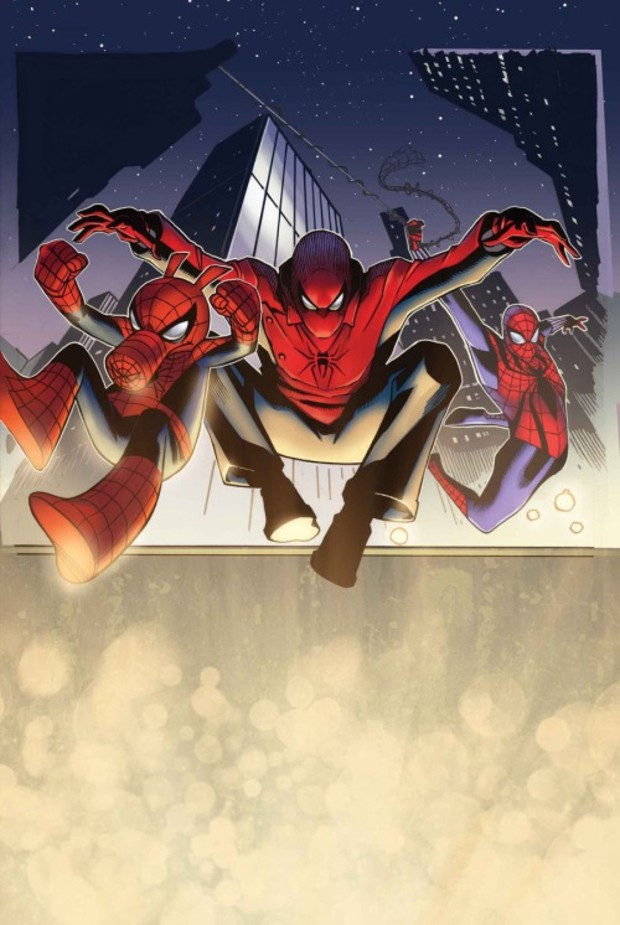 Spider-Verse Team-Up 001:
However even with Spider-Verse into full swing (har har har) they do take time to give us side stores about other Spider-People which is refreshing. This one has two different short stories (which seems to be what they’re going for lately) and both are interesting. The first one has them recruiting Ben Reiley of Earth-94 whom took over for Peter Parker since he doesn’t have any Spider powers in this Earth. The other story involves a freshly made Spider-Man Peter Parker that was bit but happens to have a different reaction then the other Spider-People. He becomes a full blown spider. Which is then reverted back to his normal self by Spider-Man Noire and a Six-Armed Spider-Man. The reason they wanted to revert him initially was due to the fact he was in a coma and would attract Morlun’s family to their and still be a target. Unintentionally causing problems for that world, then his spider powers activated and he didn’t know how to control them so they reverted to him to normal Peter Parker. Of note since Peter was in a coma, Uncle Ben didn’t die due to the robbery, he and Aunt May were both visiting Peter at the time.

Superman Unchained 9: Final Issue
So this is the final issue of Super Unchained and it’s hard an interesting life. Delays I believe changing writers at one point if I recall correctly and only 9 issues (which that’s fine). But as an even odder note I don’t particularly care for Superman. I kind of find him overpowered and boring. However… at my comic book store one of the people there really liked Superman and so I asked him why and he gave me a damn good reason. He’s the symbol of America. Not the symbol of today, but the symbol of when we weren’t such dumb shits all the time and were nicer. Superman is a pretty decent guy in reality, he doesn’t use his powers for evil (even though he very easily could) and he’s a decent role model against corruption. With that being said I’ll have to find out the next new Superman series and add it to my pull list since this one is ending. I’d like to keep reading about him.
Now as for the comic itself, Superman almost kills himself to save the whole Earth (go figure that Superman would do that) but in the end is stopped by what is supposed to be his Archenemy for the series Wraith, whom in turn sacrifices himself instead. Which is interesting since Wraith was a part of the attacking force on Earth (by a part of I mean same species) but he had never known his species so he felt more attached to Earth than to them so he saved Earth. This is interesting to see, we also see a Superman flashback since it’s delved into his backstory a little bit. While he was defending his mom he accidentally killed somebody, however he never meant for that so he gave him CPR until his heart started back up and he saved him. So to me it’s quite interesting to see just how much he holds to his ideals. Even if Lex Luther happens to think otherwise. 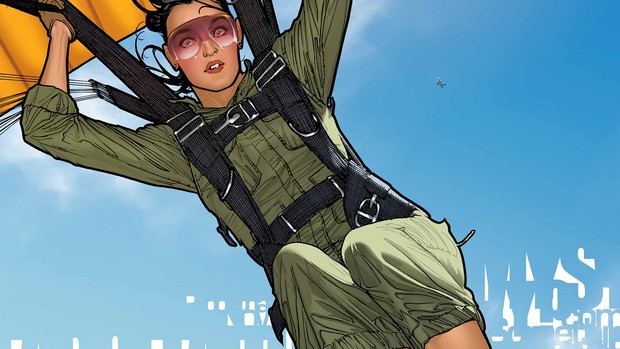 Future’s End 26 and 27:
Future’s End 26 and 27  starts a lot of things but doesn’t end them. Bruce Wayne finds out about Terry McGinnis, Tim Drake’s love interest Madison Payne was kidnapped by the professor that was working on teleportation technology and also fired one half of Firestorm. We got a few more hints as to what Brother Eye is up to on Cadamus Island but nothing concrete. Overall Future’s End is ramping up as it usually does to have a big payoff a few issues later. This series is really interesting but it can take a while before anything happens to go anywhere, which is what comics do mind you, but with so many stories not a lot of things happen issue to issue unfortunately. However I’m still pretty sure that when Future’s End is done it’ll be a great ride to just go from start to finish. 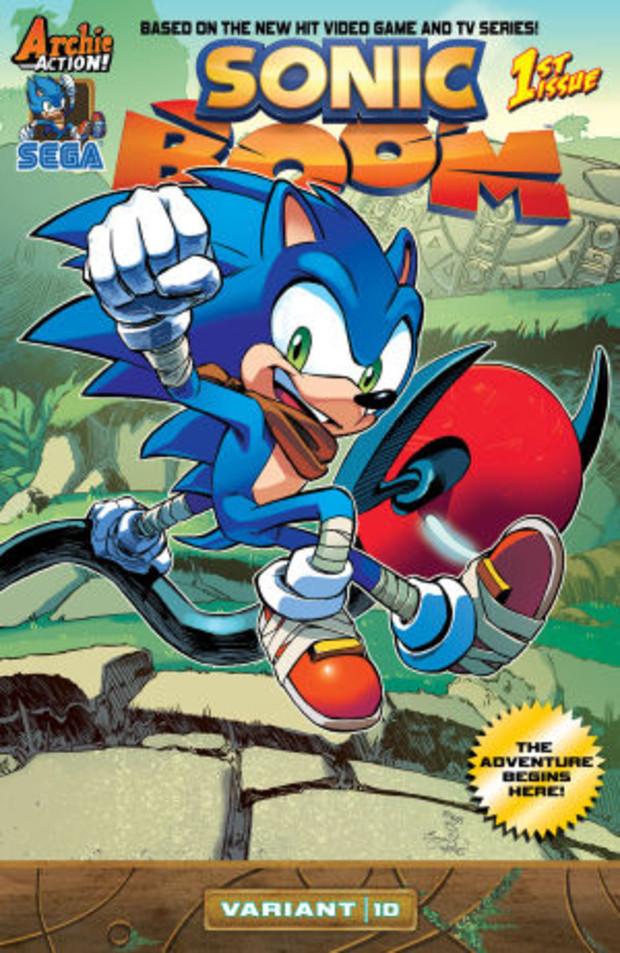 Sonic Boom:
So new Sonic Universe, new Archie Sonic comic. The Archie Sonic & MegaMan comics are some pretty good pieces of work, genuinely feeling like they know the feel of the characters that they’re working with and a genuine love of the world and games they work with.
The first issue starts off with Eggman causing havoc and reintroducing the main cast of Sonic (which is good for new readers) but it’s mainly an introduction issue to show how they’re similar to their normal counterparts. Or different. Most of the characters are very similar with slight differences here and there. The biggest issue I have is that they made Knuckles too dumb. Like dumber than a box of rocks that was tossed around in a dryer at maximum speed. He literally does not happen to get the plan that is explained to him. Twice. I admit he can be quite naïve (being tricked by Dr.Eggman so many times does make that impression upon a person) but he tries to do the right thing and has good qualities. This Knuckles is your typical strong man, but this may just be for the first issue and could possibly change. Still it seems similar to the cartoon Adventures of Sonic the Hedgehog so I’m thinking it’ll be pretty fun once the ball gets rolling. 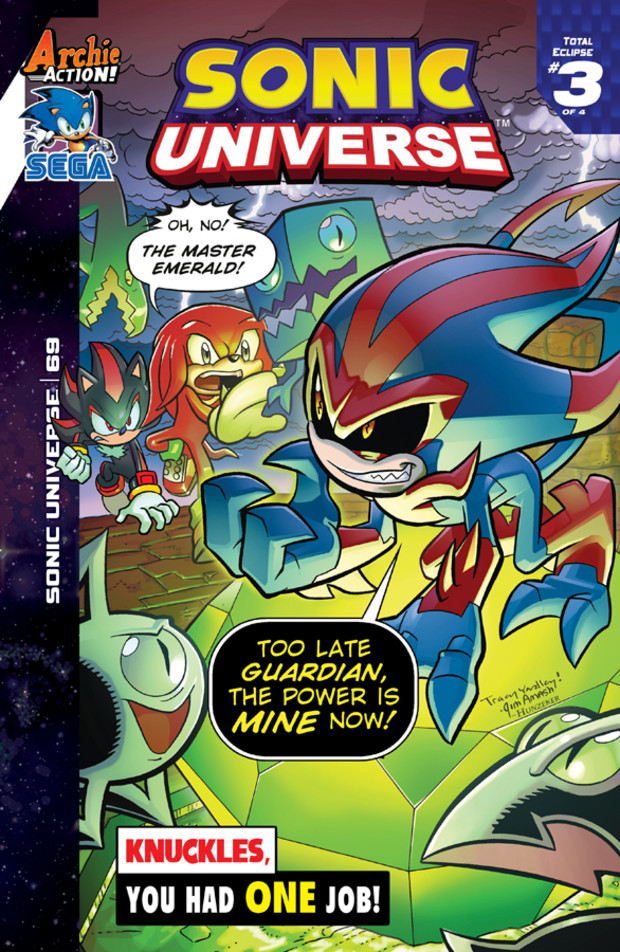 Sonic Universe 69:
So there’s a few different Sonic comics (I think we’re up to 3 now if memory serves correctly) and while they are overlapping stories, each comic focuses on a specific part of the story. Sonic Universe currently focuses on how Knuckles is trying to protect the Master Emerald and how Shadow’s Brother Eclipse is trying to power up his Dark Arms so he can conquer the planet. So… may need a little bit of a back story here… You remember that game nearly no one liked? Shadow The Hedgehog? Archie Comics decided to expand upon that story… yeah… not quite sure why either… But it works. Another Black Arms Comet came tried to obliterate Earth but Shadow and Team Dark went up and blew it up so that Earth would be okay. Problem is one saucer got away, Shadows brother Eclipse. So yeah… kind of… strange but still interesting. And the point of SU69 was that Knuckles disagrees that moving the Master Emerald would be the best way to protect it so he and Shadow are fighting while Eclipse is utterly destroying the rest of Team Dark as he goes to the Master Emerald to use it for himself. As I said for Sonic Boom, he’s naïve and hot headed. Not as stupid as they made him there. 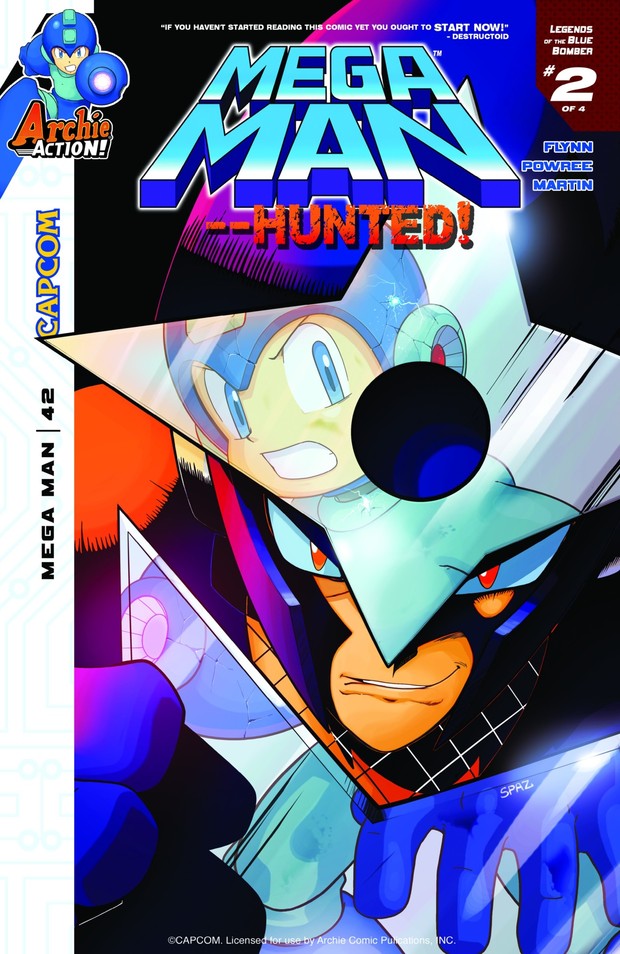 Mega Man 42:
Now we come to the Blue Bomber himself, supported by Destructoid no less! See? Look up top in tiny letters “If you haven’t started reading this comic yet you ought to START NOW!” – Destructoid. And whoever said this is absolutely correct (I can’t remember whom it was sorry). They’ve been doing some fantastic things with this comic series, as well as the Sonic one. Archie really seems to know its stuff when it comes to video game characters. As I said two comics ago… whoops.

However at the moment the MM comics are taking place in MegaMan 3, with MegaMan having defeated Snake Man and Top Man so far and Dr.Wily doing a very, very good ruse that he’s a good guy. Cossack doesn’t believe his shit for a second though (which is what I’m assuming will lead into MegaMan 4 in Archie universe, Wily will have a personal vendetta against him for not trusting him… rightfully so mind you).  It’s also interesting because they’re giving the robot masters a lot of personality, which is really cool. It kind of reminds me of the Bob & George sprite comic actually. More in tone with how the actual robot masters would be over Bob & George mind you but I’ve always loved when we learned more about the robot masters. So MegaMan only takes out Shadow Man this time before Gemini pulls a cheap move on him and then has the  to be continued pop up so we have to wait to see how MM will get out of this one. We also see a little more of Wily’s plan as he prepares himself for the eventuality when MegaMan finds something that connects back to him.

But that’s the wrap up for this bi-weekly comic book round up. Thoughts, or ways I could improve? Just let me know in the comments. Thanks for reading!