Time for some Horror Movie Recommendations!

inspired by Zyk's great blog about horror movies from Down Under (man, how do I link his post to his name!?), I thought it's about time I dished out some recommendations of my own even though Halloween is already behind us. But it’s still horror season after all, right?

Disclaimer: There's really no pattern to it. I'm just naming some of my favorites off the top of my head, like I would do if a friend asked me. Caution: Many superlatives ahead.

Ok, why not start this off with a bang I thought. This Werewolf movie is incredible, it gets better with every viewing. Directed by Neil Marshall, this is his freaking debut film before he made The Descent! I mean practical effects which vary from good to goofy (but mostly good), a unique premise, great actors. I could go on and on. The story is about a group of soldiers who are conducting a routine tactical maneuver in the Scottish highlands, unfortunately there’s also a family of werewolves living in this part of the countryside...and, before long, the squad has to fight for its very survival, which also means chopping off werewolf limbs with swords. If you think that sounds amazing, it truly is.

Unfortunately there are only a handful of really great flicks in the neglected werewolf sub-genre, but this one can rightfully claim its place among the greats next to classics like American Werewolf in London, The Howling or Ginger Snaps.

Some people have described the film as a mix between The Wolfman and Aliens, and I agree. Highly recommended.

Another one from the UK, starring the one and only Michael Fassbender (probably my favorite actor nowadays)! And he made a nasty terror flick before blowing up, thanks Michael! 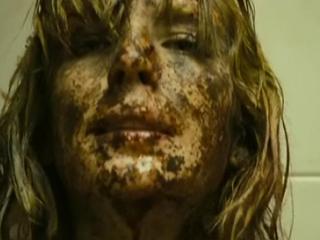 This movie is about a couple that wants to spent a romantic weekend camping at a lake. There's also a group of loud-mouthed teenagers chilling at this very lake, disturbing the peace. They have a Rottweiler as well. Things don't go so smooth with Mr. Fassbender and his girl. Yeah, pretty basic story but the execution is top-notch. What made this film special to me was the performance of Fassbender and especially his girlfriend, played by Kelly Reilly. They felt like real, genuine people and I really cared for these characters, which made the gut-punch of an ending even more heart breaking. Also bonus points for flipping the script and letting the female lead take over. She’s definitely not the weak link among the two. But giving away anything more at this point would ruin the fun for you guys.

This movie, plain and simple, is part of the reason I adore modern French horror cinema. What I admire about French directors is that they’re unafraid to cross boundaries, there are seemingly no taboos here, and thus, viewing habits even of grizzled horror fans like myself are challenged.

Inside opens with a horrific car crash which the pregnant Sarah miraculously survives. However, her husband does not. A couple months pass and Sarah is now on the verge of giving birth. One evening though a strange woman shows up at her door step. She just wants to use a telephone she tells Sarah, who (smartly) turns her away at first. That woman won’t leave though... What she really wants sounds ridiculous, namely Sarah’s unborn baby for reasons (yet) unknown. What follows truly is a bloody nightmare put on celluloid.

I mean, there are many home-invasion flicks dotting the horror landscape these days, but non are as nasty, hyper-violent or tense as Inside, Julien Maury’s and Alexandre Bustillo’s first feature film. The next movie by these two talented guys looks promising as well, Among The Living.

Another movie by a French duo, this one is written and produced by the great Alexandre Aja who brought us the classic High Tension as well as The Hills Have Eyes (the remake of course, which I enjoyed very much). It is directed by his buddy Franck Khalfoun.

Maniac itself is also a remake of the 1980 slasher flick by the same name (I have yet to see the original though).

It is the story of Frank Zito, brilliantly portrayed by Elijah Wood, a demented serial killer stalking LA’s streets in search for women. Frank is also the owner of a mannequin store. In order to “dress” his mannequins he likes to scalp the women so that his dolls get to “wear” their hair. Yikes. 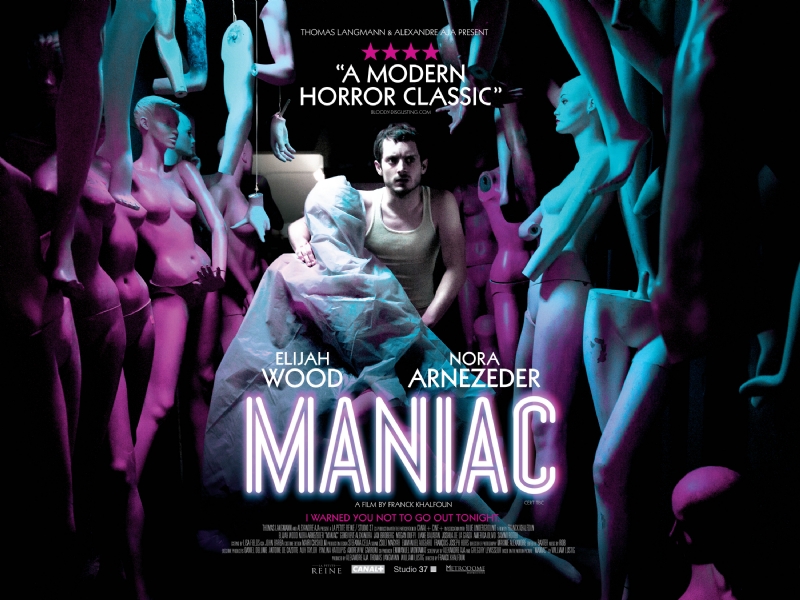 Later on Frank meets Anna, a young photographer, who compliments Frank on his “lifelike” mannequins and wants to work with him as an artist for her next project…

What’s really unique about this psychological slasher flick is that it is mostly shot from a first-person perspective. The viewer is in Frank’s shoes so to speak, and that means gets to witness every vicious murder from his perspective. Rarely do we get a third-person view or a reflection in the mirror or window of Frank, we mostly hear his voice and thus “are” Frank.

As with Inside, Maniac is a very graphic and violent film. Some scenes really made me look away (well, almost) in disgust, especially the scalping of a woman who’s still conscious… You have been warned.

Still, this is an excellent genre movie in my opinion with great actors, slick camera work and a moody synth soundtrack that perfectly complements the atmosphere. And gore hounds will get their money’s worth, that’s for sure.

Now for something completely different. Earlier this year I had made up my mind that I wanted to learn more about Hammer Film Productions, the legendary UK studio which put Christopher Lee (among others) on the map and was kind of the European counterpart to Universal Studios’ American horror at that time. On a side note, I like Hammer better than Universal though because they introduced some nudity as well as blood and violence to the horror genre.

Well, one of the gems I watched was The Devil Rides Out, directed by Terence Fisher (who really made the best Hammer stuff) and starring Christopher Lee. It is based on the novel by Dennis Wheatley, who also wrote the classic The Wickerman. I’m really into horror stuff that deals with the occult or devil-worshipping, so this was right up my alley.

Mr. Lee plays the Duc de Richleau who has to rescue the son of a friend from the clutches of a satanic cult, led by the charismatic Mocata, who’s played by Charles Gray.

There’s just something about these old horror movies, they’re just so...classy. I anticipated every scene with Chris Lee, because he’s just that good. It almost seems that after having played the iconic Dracula (who barely had any dialogue) for so long, Lee jumped at the chance to play the hero role and really show his acting prowess. Equally brilliant (and menacing) is his evil counterpart, Charles Gray. He has some of the best lines in the film, including “I won’t be back, but something will”, hinting at his ability to conjure evil. How creepy, especially coming from a guy worshipping demons and the devil. Of course, the special effects are thoroughly outdated by today’s standards, but that didn’t bother me, it rather adds to the charm.

I think this is a must watch for fans of Christopher Lee and Hammer. Nuff’ said.

That's it for now. Let me know if you saw or intend to see any of the movies I've just mentioned, and what you thought of them. I'll be back :)