Why Do People Love Monster Hunter? 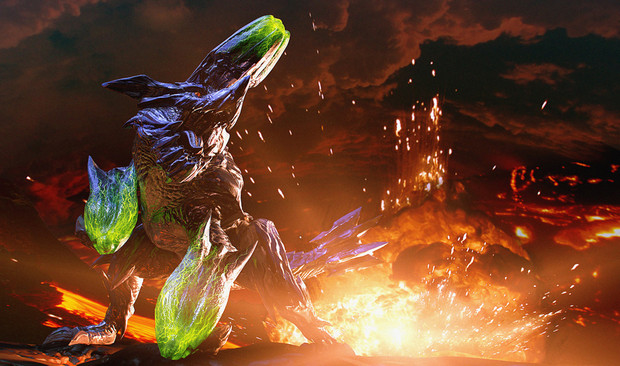 So everyone here knows what “serendipity” means, right?

Pared down to basics, you can think of it as a synonym for “coincidence”.  In my case, though?  It tends to mean that somebody beat me to the punch in making posts that steal my thunder so thoroughly that saying even a single word would make me look like a copycat -- that, or some sycophant.  I know, I know, it’s probably not as bad as I’m making it out to be; still, I absolutely hate it when I match up with someone.  I just have to be the premiere pretty little snowflake.

I want to put out as much content as I can, but sometimes it feels like I’m fighting against time itself.  How much can I really talk about a game if its relevance falls to the wayside?  I mean, I’ve wanted to toss up a post on The Last of Us here for a while, but does anyone care for something well over a year old?  Alternatively, if I tossed out a post on something semi-recent like The Evil Within, what is it that would set it apart from someone who did another post on it -- and much earlier than I did?  I’d be redundant, arguably.  And I don’t want to be in that situation, so I try to consider my moves as carefully as possible.  Think before you act, so to speak.

But this time my brother thought for me.  One night he said, “You should do a series called ‘Why Do People Love Monster Hunter?’.”  So I figured, why not? 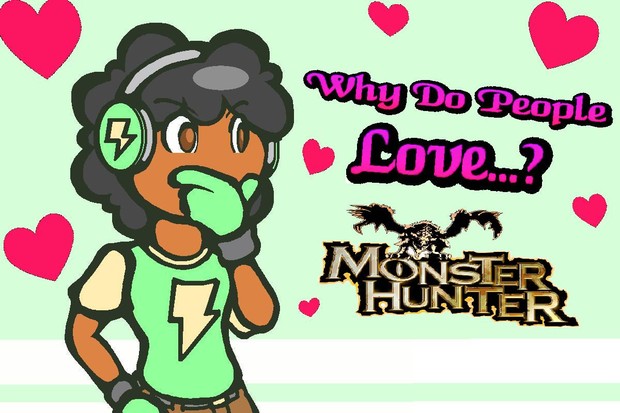 Part of the reason why I do posts is to get feedback from others.  I want knowledge, and ideas, and experiences, and opinions however I can get them.  That’s going to help me in the long run, no doubt.  After all, I’m just one person; I’ve had a finite number of run-ins with games, and there are HUGE gaps in my knowledge of titles past and present.  So I need to learn more, and evolve more as a result.

I need perspectives -- the ability to understand others’ lines of reasoning.  I mean, it’s one thing to say “People like Call of Duty”, but at this stage that’s not enough.  Not for me.  I can learn plenty from playing the game for myself and drawing my own conclusions (at the cost of suffering through the game, natch), but I need more than that.  I need to ask questions as to why people like Call of Duty, or any given game, as a guideline of how to proceed.  And who knows?  Maybe if I ask others to explain why they like what they do, they’ll be able to better intuit the strengths and weaknesses of the games they digest.  Maybe they’ll gain even more than I do.

But let’s not talk about CoD.  Let’s talk about Monster Hunter -- as per my brother’s dear wishes.

Full disclosure: I’ve only played Monster Hunter for myself three times in my life.  The first was a demo my brother grabbed on my presumably-melted PSP.  The second was the release of Tri on the Wii.  The third, and most recent, was the Ultimate version on the Wii U.  As you can guess, it’s my brother who’s gotten the most mileage out of the franchise so far, to the point where (prior to the release of Mario Kart 8) it was the one Wii U game you could count on him to consistently play without complaint.  He’s an ex-WoW player, after all, and as I type this I can hear him playing Final Fantasy 14; MMOs are right up his alley, for a number of reasons.  But let’s assume the worst of him -- for the moment -- and say he’s just in it to get new pants.

My experience with MH was…not quite as pleasant.  I started up a file in the Wii U game to try and see what the noise was all about.  See the world, explore the systems, check out those monsters -- the standard stuff.  Unfortunately, I didn’t get nearly as far as I wanted to -- or very far at all -- because in the tutorial section I went out and killed some baby dinosaurs instead of the parent.  Then I figured I was some horrible monster taking advantage of innocent creatures and haven’t played the game since.  The fact that (according to testimonies) you actually harvest the tears of monsters by beating on them doesn’t exactly leave me at ease. 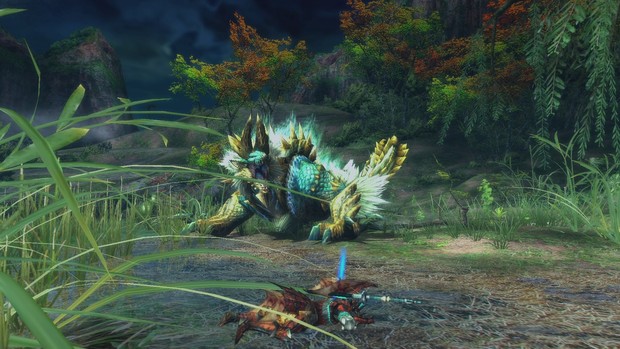 Don’t get me wrong, though.  Emotional trauma aside (i.e. the confirmation that I’m not the pure-hearted maiden I strive to be), I actually get the premise of MH -- and in a lot of ways, support it.  I didn’t even have to play for an hour to feel the affect; it felt as if the game practically demanded me to get in touch with nature, even if it started me off in some bustling town.  Okay, it’s true that plenty of games will have you go to the usual suite of “forest level, snow level, lava level”, but with MH I could feel the prospect of exploring these areas and interacting with the world on a level I haven’t gotten in a while.  Barring Pikmin 3, but that’s a topic for another day.

Obviously, that’s a good thing; some of the strongest stories out there (games or otherwise) are those that can flesh out their worlds.  They remember that the settings are characters in their own right -- and proceed to characterize them as best they can.  I’d think that games like WoW accomplish that as well, but I can still appreciate MH’s ability to make me leave my world behind in place of its own.  Untamed wilds.  Frontiers aplenty.  Traversing sprawling landscapes on my own two (virtual) feet.  Being a part of something bigger than yourself.  What’s not to love? 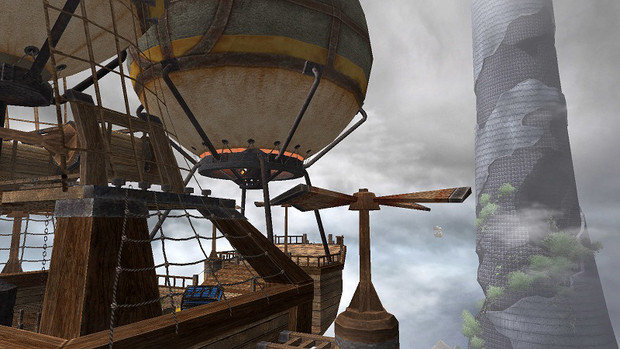 My guess with the franchise is that the people in it are heavily dependent on the materials gained from monsters to live their daily lives.  It makes sense, really; if this is a world that takes us back to the past (or some facsimile of it), then it’s likely a society heavily dependent on natural resources on every level -- food, obviously, but clothing, shelter, craftsmanship, and more.  The societal implications are staggering, and lends to a scope that’s ripe for telling plenty of potent stories.

Or maybe it really is just about getting some new pants.

I have issues with such narrow-minded thinking; it’s as if the game implies that the only thing that matters is getting loot and killing monsters -- and pushes you head-first into the hamster wheel.  On the other hand, maybe that’s not so bad.  It lends itself to a sense of ownership over a story…or to be more precise, it lets you make your story.  It’s your adventure, allowing you to someday tell your stories of triumph as you crush down towering beasts.  Or, heaven forbid, you can learn firsthand what it’s like to get ground into paste under a dragon’s heel.   Either way, there’s potential there; you can have a new adventure and a new experience each time you play. 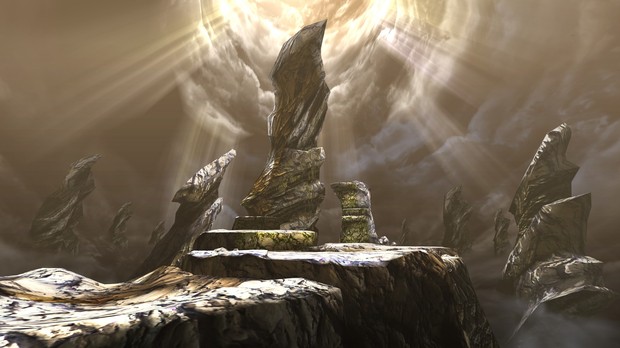 But that’s all based on my conjecture.  Like I said, I don’t have a lot of experience with MH -- and given that I’m the self-proclaimed “Eternal Optimist”, I’ve probably painted the rosiest view possible of the franchise.  How does it play?  How’s the combat?  Does it deliver on the scale, and the potential?  Is there a point to making dragons cry, and unsuspecting fauna into orphans?

I suppose that’s where you all come in, then.  What do you think of MH?  If there are any diehard fans or experts reading this, what sort of nuances keep you coming back for more?  Why is it, like, one of Capcom’s only breadwinners right now?  And is it rightfully so?  Go ahead and weigh in.  Give me all your love, as the song goes.

If I didn’t know any better, I’d say that song was vaguely sexual.  Just vaguely, though.

Whatever the case, feel free to give suggestions on what other games I can do these quick little posts on.  I wouldn’t mind thinking critically -- however briefly -- on games I wouldn’t have considered otherwise.  Plus, I’d like to try something different for once.  Maybe find something new and different that works in terms of tossing out content.  Could this be a thing?  We’ll see.

In the meantime, please accept this collection of JoJo rush sounds.

Heh ha.  Next you’re going to say “Man, they sure can talk fast.”