(Note: Any game I give an initial thought to will not have a review score, due to the fact that it is initial thoughts. I post these with about 6 hours or more into the game to see how it feels and how I'm enjoying it so far.)

I'd like to apologize right now for the picture quality, I was trying to post better versions from the websites themselves but for some reason the blog editior told me I was trying to sell chinese thongs. Not sure why.

For those interested on my initial thoughts of the first game here’s the blog that I did for it last week now properly working: http://www.destructoid.com/blogs/Solar+Pony+Django/solar-pony-django-s-initial-thoughts-on-bayonetta-1-wii-u--283064.phtml 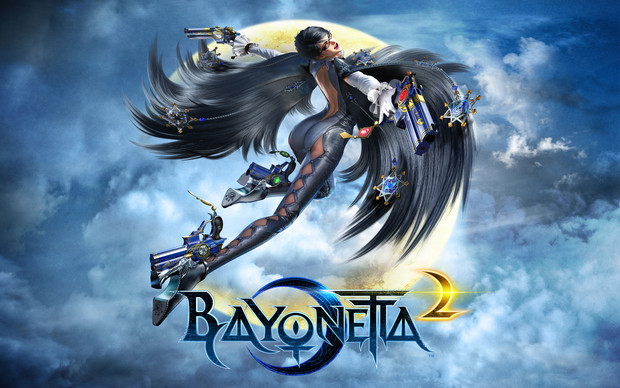 After finishing Bayonetta 1 I was ready and eager for more, the first game plays really well and is just a blast to play. So I was quite excited to play the second one right after, thankfully I can say the game is what people wanted from Bayonetta 1 but with some tweaks here and there that happen to fix, or improve some of the problems that the first game had. Really makes me quite happy that this game exists in the first place and on the Wii U since it wouldn’t exist without Nintendo stepping in.

While we’re on this subject I’ll cover real quickly that a lot of people got upset that it was a Wii U exclusive and started acting really stupid. Most of that has (thankfully) blown over but there is a few out there that don’t quite seem to fully grasp that this game wouldn’t exist otherwise: http://bayonetta2boycott.wordpress.com/ Now admittedly I wasn’t going to even talk about the “boycott” but then I saw this site when I was looking for some information and… I honestly thought we could all use a chuckle, so I threw it in.

Nintendo and Platinum has also had a lot of fun advertising this game from Playboy: 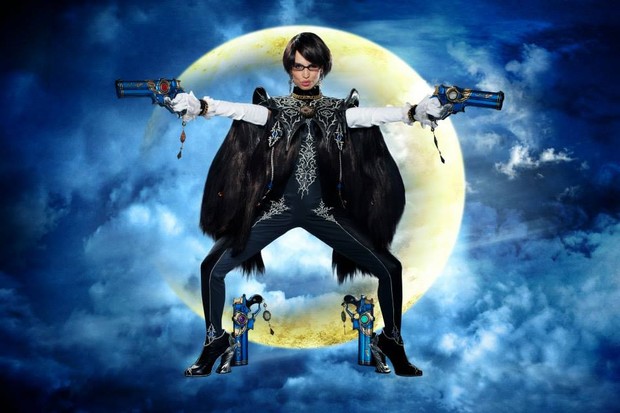 To dressing up one of the children of the people that work at Platinum as Bayonetta: 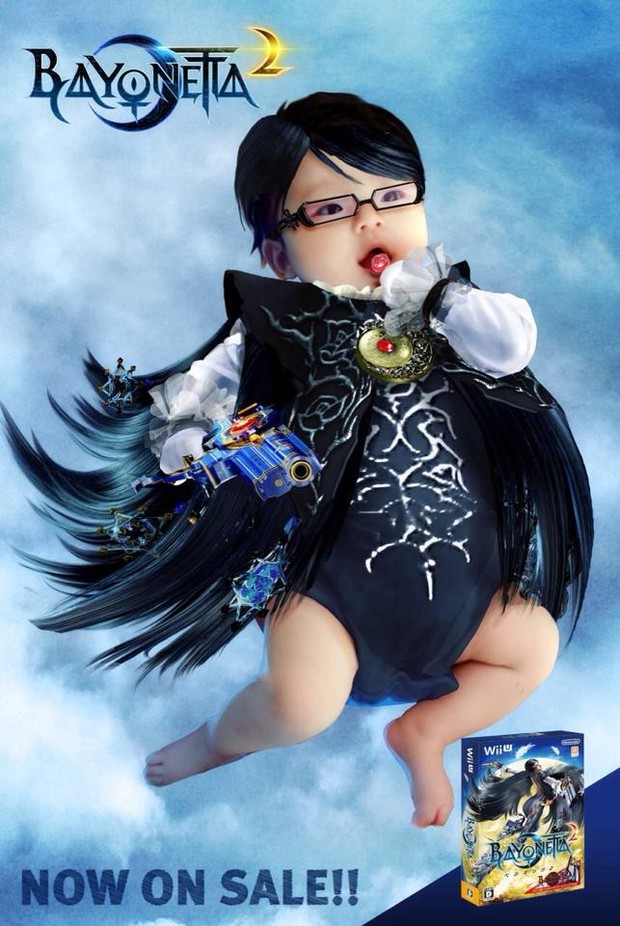 Anyways Bayonetta 2 starts off with Bayonetta having not really had much to do since the ending of the last game and that everything has gone quiet. (Both Jeanne and Bayonetta did get new outfits and hairstyles however. I kinda miss Bayonetta's old hair style. I do however like Jeanne's new one.) Eventually this all turns up and the Angels start attacking and causing a mess when they go after Bayonetta to not much avail. However things start to take a different turn after Bayonetta summons Gomorrah and the portal doesn’t fully close. So Gomorrah attacks Bayonetta and Jeanne takes the blow instead sending her soul to hell. Bayonetta then has to rush to the actual gates of hell so as to save her friend within 24 hours or she’ll be stuck there. Forever.

Now, I don’t want to get to much into the story, so people can discover it themselves without spoilers. But I will say that Luka comes back and that Bayonetta has a new companion to accompany her as well named Yugi Mot- I mean… Loki: 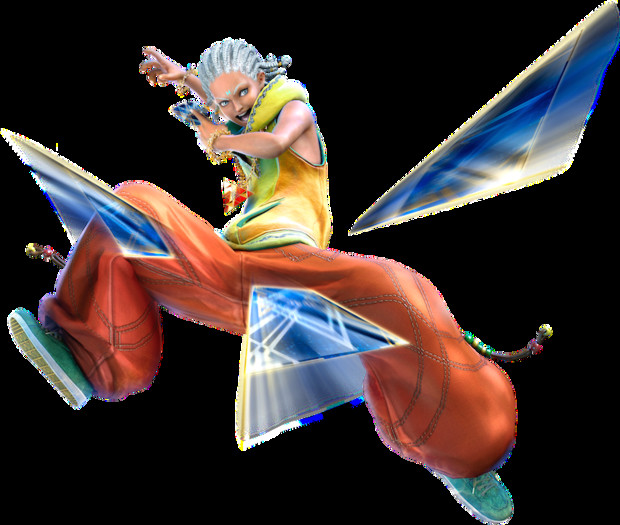 Whom happens to be a pretty interesting character but does happen to take a little bit of time to warm up to. Still, he’s an interesting part of the story and once you get used to him actually pretty fun.

Bayonetta 2 fixes either all of or nearly all of the problems that were holding the first game back a bit. Items no longer detract from your score (I do still happen to recommend NOT using them, you get a halo bonus for not using items.) I do recommend getting the Mallet of Rewards rather early on, as it does happen to give you a significant amount more money and it also happens to drop a lot more items, in particular Laurels that way you don’t have to actually use a healing item. Instant death QTE’s are gone, falling off of ledges into never ending pits doesn’t take health anymore. My personal favorite addition the Umbran Climax, which was available in Bayonetta 1 at specific points but can now be used after filling one bar of magic and completely wrecking enemies. The more magic you have however the longer it lasts so you don’t have to use it right away.

The enemies are more enjoyable as well so far, nothing really to terribly annoying. In fact the most annoying enemy is a return from the first game the Golem (one of the few returning enemies actually) and isn’t nearly as bad as Gracious & Glorious were or Grace & Glory. 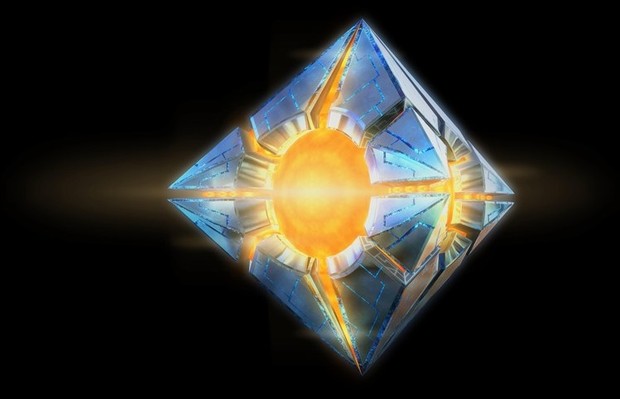 All of the enemies feel really fun to go against and have good designs. What is probably my biggest complaint about the enemies is that so few of the enemies from the first game return in fact the only one so far is Golem. Just strikes me as a strange design choice since they could’ve expanded upon what the first game had and included more. You do also get to fight enemies from Inferno this time not just Paradiso which is interesting, they have a different look to them (as they should) and just feel dirty whereas Paradiso Angels are sleek and shiny. And after having a small problem last game with having to fight Angels since I’m a Catholic (although Platinum does to try to distance itself away from Religions but keep it close as well, it’s actually quite interesting to see) it was enjoyable to fight some demons too.

The weapon choice is once again quite large and much like the enemies there’s “technically” no repeats. A lot of the weapons are very similar to the weapons in the first game but there are no actual returners that happen to be the exact same weapon. Which I kind of find strange. The Rakshasa are my favorite weapons with that not being a surprise since they are the replacement for the weapons from the first game that I loved the Shuraba. 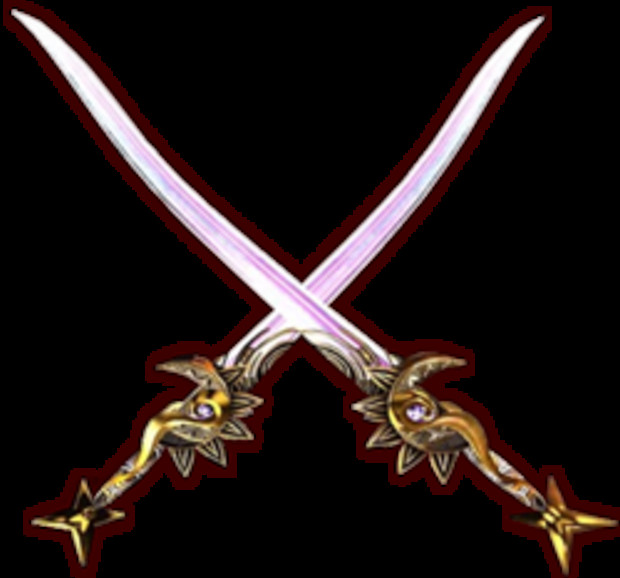 And I’ve experimented with some of the other weapons but don’t really use them, yet. I kind of like what I have going at this moment and really wish there was a pair of shotguns like in the first game. I did enjoy Chernobog mostly the only problem with that one is how slow it was, powerful but did have a bit off a wind up arc, the other problem is Rakshasa had to be equipped to the feet and I didn’t like the combos for it there so I changed it.

As for Kafka I have NO idea how to properly use that one, and Undine was fun but not quite my play style, I’m hoping that some of the next weapons I find speak to me, because I do like the weapons I just happen to be partially specific with what I choose.

One small thing I did forget to mention actually is the worlds a lot more fun to explore this time around I think, last time it could be hard to find the collectibles that you needed but this time? Not nearly as bad, and I don’t happen to mind when something’s hard to find but it’s also nice to find easy items as well on occasion. The challenge areas are much easier this time as well (or at least I think so) but have gotten a slight name change. They are now known as Muspelheim and act as Bayonneta 2’s Alfheim. Slightly different yet still worth your time to tackle to get an extra health or magic boost.

The music in Bayonetta 2 is once again quite stellar,the soundtrack happens to beat the first one in my opinion with a few selections here and there making me like particular pieces of Bayonetta 1's more. That's not really a bad thing though. Quite frankly I'd prefer two great soundtrack than just one good one and one that's okay. But hey SEGA of Japan... why don't you release the Soundtrack statewise too like you're doing in Japan. We'd buy it.

So overall Bayonetta 2 truly feels like the stronger game out of the two, there’s more to do in the game, and they fixed some of the games that dragged the first one down a little. The first one was great too but the polishes they made here and there really seem to give the second one that extra shine, and I know I’m glad that I finally got a chance to play this series that I had heard so much about but never gotten to play.

Edit: While not a quick time event persay there is ONE enemy that I'd like to give mention to because it can kill you in one hit. 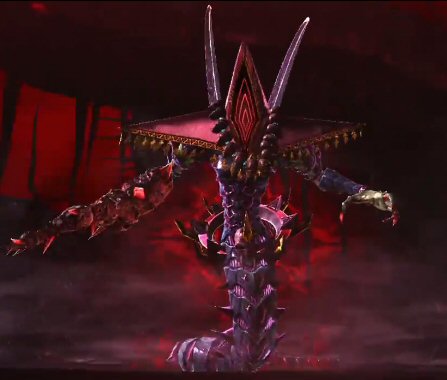 Meet resentment. The only enemy in the game, the only time in the game that it has actually managed to kill me (on 2nd Climax at least) he was a move that transforms you back into Cerezea than will one hit kill you so... watch out for that.

2nd Edit because I'm stupid and forget to mention one of the new features that's really fun.

For Bayonetta 2 they also introduced a simple multiplayer aspect to the game, it's not overly difficult however it can be full of suspense. In order to get at least a decent amount of Bayonetta's in game currency you need to fight enemies but if you really want money multiplayer's where it's at. Short little bursts with groups of enemies as you compete with your partner to see whom can get the best score. You also bet Halo's while doing so which as long as you win increases your profits by a pretty significant amount.

You can also partake in multiplayer with a CPU (good thinking on Plantinum's part, for when the online no longer works at least it'll work in some way).  It's also a lot easier to go against a CPU most of the time since they're a CPU and don't have quite as good of a grasp onto what to do as a player would do. Overall the multuplayer's mostly fun, if you're trying to play with real people can sometimes be a pain. Mainly due to the fact that they have to respond back in order to actually play. And not everyone does.