Ok, part 3 lets do this another 5 Australian horror movies to get in you.

First up, check out the 2003 zombie film Undead. Directed by Michael and Peter Spierig, Undead follows the inhabitants of an Austalian town overrun by zombies casued by aliens. It's funny with some good gore effects and both a tri and a quad shotgun. It's a hell of a lot of fun a definitely worth a watch for all you zombie lovers.

After Undead, the brothers made Daybreakers. Comming out in 2009, Daybreakers is set in a world where most of the population are vampires. Daybreakers as about what happens when they begin to run out of food, our blood. Short awnser, they turn into freaky bat monsters that feed on regular vampires. I wont really add much to this besides just a few things you should know. The film stars Ethan Hawke, Sam Neil and Willem Dafoe, there is a human resistance group that fights vampires with muscle cars and crossbows and that this film has one of the craziest/ bloodiest final acts of any movie ever. If that dosen't sound awesome to you, than you are obviously the worst person ever. 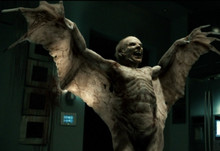 Fun Fact: This was filmed in Nekrosys' home town of Brisbane.

If you enjoyed The Tunnel you should also check out Lake Mungo. Directed by Joel Anderson and released in 2008. Lake Mungo is another Found-Footage Mokumentary concerning the family of 16 year old Alice Palmer after she drowns while swimming with her family at a dam. Weird things begin to happen around the house and there are numerous reported sightings of Alice. Like The Tunnel, Lake Mungo relies less on jump-scares and is more of a psychological horror.

I always like to add an older movie to these lists, and this one is no different. Like Patrick, this is another classic Ozploitation film loved by Quentin Tarantino. 1978's Long Weekend directed by Colin Eggleston is about a couple Peter and Marcia as they go camping over a long weekend. While camping they act like complete pieces of shit by littering and killing animals for fun. Soon however nature fights back and because we side with the animals and hate the people it's fun watching them get what's comming. The remake however is pretty bad so maybe avoid it and stay to the original.

The final film for this part is going to have to be another classic, 1984's Razorback. Directed by Russell Mulcahy, Razorback is about a gaint razorback pig messing up an Australian town and slobbering all over everything. It's really dated and the pig looks pretty bad but I can't deny it's a fun little film. Just get some mates together, crack open a few beers, smoke some weed and behold the majesty that is Razorback you wont regret it.

Well that's another five films to watch for Halloween and I can still give you more. And I most likely will as I'm really enjoying making these lists and going through my back catalogue of Horror movies. As always feedback is greatly appreciated.

Hey I'm Zyk. I live in a small town near Melbourne in Australia and I love video games, film and music. And have been playing games since I was 4 playing Jill of the Jungle, Doom and Wolfenstein 3D on my dad's old computer.

When it comes to art I believe in keeping an open mind and will try anything.

My favorite genres of games being Survival Horror, Shooters, WRPGS, Action and Platformers. My favorite series are Silent Hill, Halo and Ratchet and Clank

My favorite films are Pulp Fiction and the 1982 version of The Thing. I also love watching any horror movie I can get my hands on.

And when it comes to music I like it fast and heavy but especially love Melodic Death Metal. The fusion of melody and brutality gives me a tingly feeling in my pants.