I've recently been playing through GTA V for the second time. The first time I didn't really think much of it and generally passed it off as average, but this time I've grown to like it a lot more. My second playthrough also encouraged me to do things outside of the missions I had already completed in the previous playthrough, namely all the random things I saw could be done on a whim. One such thing was to hop on a moving train, run and jump my way to the front carriage and hold up the driver, making my own little heist. So, I got all the way to the front and walked towards the cabin door. 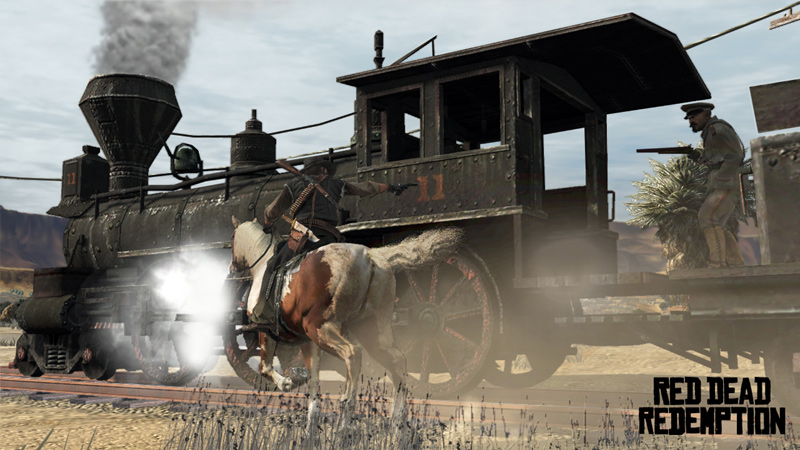 "Ok", I thought, "I guess I'll just point my gun at the driver, he'll stop or at the very least slow down, maybe he'll lose control of the train?". Nothing. Confused, I relented to just shoot him in the head. Nothing. This is one of the major flaws of GTA V; Red Dead Redemption allowed me to both shoot the driver, stopping the train, and also rob the passengers on board. It was when I remembered this fact that I concluded GTA V would have been a better game if it were merely a sequel to Redemption.

The mechanics of Redemption are even set out in a perfect way for Heists; using the persistent bounty system in conjunction with something such as the cops ability to ID you based on a description in Mafia II would make for a thrilling cross-country fight against the law. You'd have to stash the gold or weapons somehwere safe and eliminate the tailing posses, maybe even silence the local sheriff to ensure your disappearence. All of this, combined with the character switching of GTA V would make for a stellar game, and the wild west setting would certainly alleviate the boredom between missions I sometimes found with GTA.

Just think of all the other features that have been removed from Redemption to GTA V; hunting animals (without having to go to a pre-determined spot), horses, bounties, posses, duals, sympathetic characters, atmosphere, the list goes on.

So there you are, why Heists should be the next big thing for the Red Dead series, all triggered in my mind from a train cabin door.

Oh yeah, and Undead Nightmare is the best thing ever for Halloween gaming...and Rockstar please make a HD version of RDRevolver...and a PS4 version of Redemption...I'm done.