NOTE: I CAN NOT STAND BEHIND THESE STATS 100%, some of them are older, some of them only kept a small sample size, so keep that in mind. I DID LIST LINKS, so take is as you will.

Okay, give me a cookie, because I've actually done some homework on this blog topic. Now with the topic's about feminists going out on a crusade of justice, I decided to try and be objective. After all, this is still a sensitive subject, so I don't want to get too many people angry. Yet, what I found, kinda surprised me, so I thought it best to share it with my destructoid minions.

Half of all gamers are...

Women, that means the other half would be men. Apparently, from what I've found, men and women enjoy different things, clothing to cars, from food to beverages, even entertainment, such as books, music, movies, and... you guessed it, video games. The latest media that happens to be interactive, the sexes are divided on what types of games they prefer. Let's not misconstrued what I'm saying, which is that not all men like one game, and all women like another, that would be flat out WRONG. What I am saying, is that from recent studies made from 2014 to as far back as 2008, there's a difference in what men and women prefer in interactive media.

I Apologize for the poor picture quality above, but if you want to click the link below you'll see the chart clearer at it's source. Also keep in mind that this was made back in 2010, I have more sources with more modern material that was recently done in 2014. I'm just showing this off as a way to prove that even as far back as 4 years ago, there is a difference in what the genders like.

The Sims, PopCap, and Big Fish Games, women dominate in numbers here, where as games like GTA 4 or WoW, men have the majority. The reason I present that is to talk about 'target audiences'. The fact that games like GTA 5 made over 1 billion dollars in 3 days is because they knew that the majority of gamers would probably be male. Thus, they added things that their target audience would enjoy, such as gentlemen clubs, custom clothing men would enjoy, or 3 male protagonists... or antagonists if you prefer. (Not to sound like a sexist douche here.) They did this, without thinking of a feminist agenda and went with their baser, greed trumps all, instinct. You can see that paid off well for them with the first 3 days of release, which, I say again, grossed a little over 1 billion dollars.

Before we go on, yes, the game is sexist, yes, it's not a real representation of America, yes, it's wrong to portray women as sex objects. With that said, my question is, would it be more successful without all the offensive material? I ask because that's what publishers and developers ask. Apparently, it costs a lot of capital to make a triple A title, such as GTA 5, and they need to make the cost plus profit. How much did it cost? $265 million, say damn skippy right here ->

Now, this isn't to defend GTA 5, I whole heartedly admit it's failings as being geared toward a male audience. I merely use this game as one example of how a target audience, can help sell successful game in this industry. That's not to say that ALL games do this or ALL triple A titles, but most follow graphs and charts to help make their game more successful than it would be otherwise. Research is actually done in this manner by both developers and publishers, apparently greed moves the industry along. Who knew? (sarcasticsonofableep) 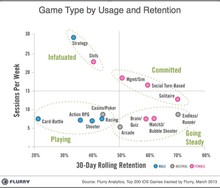 Again Blury as fudge, but you can still make out what it's saying... (link just below pic) Basically, it's another example of what women and men prefer to play more. Women are more active (then men) in mobile gaming markets. There are games that actually use this data to target women specifically to buy their games. Which is to say that it's not just men that are the sole target. Greed works both ways, and games like Mirror's Edge 2, latest Tomb Raider, quite a few Big Fish Games (which specifically target older women) ect. It's not just one way, men domate all, but the point is that these descions arn't based on a sexist agenda, it's based on greed. Most amount of sales pushed will allow you to build the next big game, and if sales data helps in any way, shape, or form, USE IT.

Feminists be damned for all I care, we SHARE equality in gaming, it just happens that some games are geared toward men, and some toward women. I don't care how many Anita's or Zoey Quinns are out there, they're wrong. Greed pushes this system forward and the genders decide whats popular for them, and this may not be perfect. Yet, it's far from sexist, and it's not dominated by one sex over the other. Gamers are in fact, inclusive, we'd love for you to have a good time with gaming. I just wonder if the tropes have ever offended anyone before they were screamed from the rooftops? Because there are male tropes too, and that never offended me before. That's my two cent's, which is worth just that, two cents.

I'm WeasleX(tm) and I've been a gamer since I was 5 years old. I remember writing code from PC magazines my dad had, I think the first one I completed was one modeled after the board game battleship. Since then I've been a gamer, from PC (mostly) to console's, I've been addicted to video games.

I build some games using RM2K3, and I have a custom built PC rig I've built myself. Thus, I think it's safe to say that for right now, I'm a PC gaming fan. Even if I own an Xbox360, and a PS3, the PC has remained my number one gaming device.

So that's me in a nutshell, besides the facts that I like long walks by the beach, getting caught in the rain, I'm not into vodka, I'm into champagne. lol