Fangs for the Memories: His name was Jason 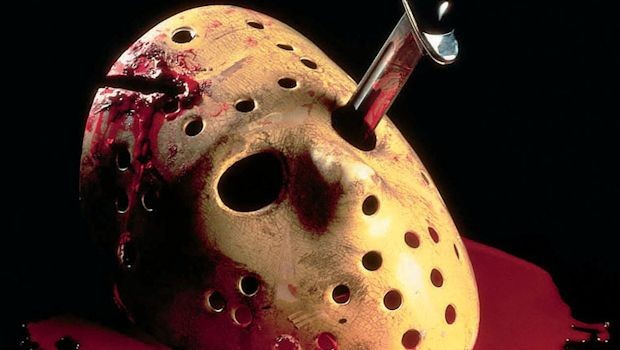 Halloween is, without a doubt, my favorite time of the year. Since I can remember, I’ve always been a huge fan of horror movies, and things that were meant to scare you. Maybe it’s because I spent most of my childhood up North. I could always tell when Halloween was getting close. The leaves on the trees were changing colors and the wind blew a little cooler.

Now, my contribution isn’t going to be about any specific video game that scared me; no, I’ve decided to go another route. I’m going to talk about the one movie that caused so much mental damage to me that I didn’t sleep in my own bed for months, and to this day, still causes me to feel uneasy after watching it.

A little back story: When I was a little kid, we’re talking between five and nine, my dad used to bowl in a league in our small town. This league was always going on during the fall season, which meant when he got home (Friday nights) I would wake up and watch a late night horror movie with him. Now, these movies, they were nothing to really be afraid of. Not to date myself or anything, but we’re talking about the late 70s / early 80s. The late night horror movies usually consisted of some universal monster such as Frankenstein or Dracula, or some cheesy sci-fi flick from the 50s. These were always in black and white, and there was never any sort of gore. These were “G” rated, if you will, not even enough to scare a little tyke like me; they did, however, draw me into their dark worlds, hooking me on the macabre stories. 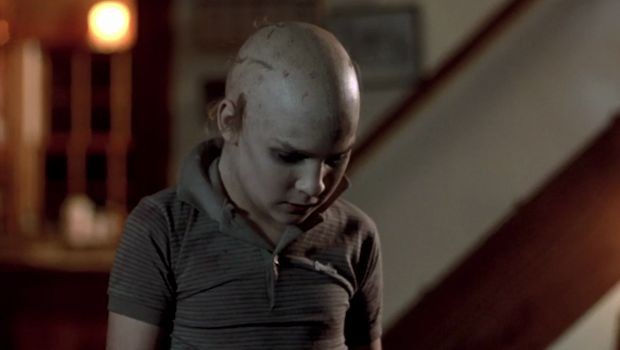 Fast forward to 1984. I vividly remember sitting on our couch in the living room; it was a small room, enough for a couch, a La-Z-Boy chair, and a couple of TV dinner tables. It was definitely cramped, which didn’t help late at night when the lights were off. Anyway, there I was, sitting on the couch watching TV. It had to be the weekend, because there is no way I would have been allowed to stay up as late as it was by myself, especially at that age. The TV was on some random channel (this was before we had cable) and I couldn’t tell you what I was watching, and then it happened, the movie trailer that made me scared to walk down the tiny hallway leading to my room.

“Jason is back! (ch-ch-ch-ha-ha-ha). Three times before, you have felt the terror” – holy, mother of god, what in the hell is this? “Known the madness, lived the horror.” This is about where I started sinking lower into the couch, my heart beating faster. “But this is the one you’ve been screaming for.” No, no I haven’t been screaming for anything, not yet anyway. Oh god. “Because Friday, April 13th, will be Jason’s unlucky day.”

Everything about that movie trailer (Friday the 13th, the Final Chapter) just screamed “No” to me. My heart was pounding, and every little sound I heard in the house had me on edge. I was literally scared for my life, but I also remember feeling excited. I wanted to see what that movie was all about. Who was Jason? Why was he wearing a hockey mask? This was the first time I had ever heard of “Jason” or “Friday the 13th.” Up until this point, my horror movie knowledge was basically giant, mutated spiders from the 50s and the Creature from the Black Lagoon. This was horror, and horror I knew, or so I thought. 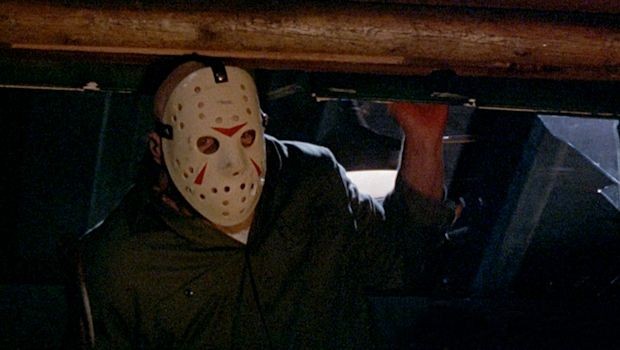 Fast forward a few weeks. My fear of “Friday the 13th” at this point had passed. I had seen the trailer numerous times since the first time I watched it and I was basically “over it.” I had returned to sleeping in my own room (yes, the trailer literally scared me into sleeping in my parents room for a bit) and I had all but forgotten it; that was until my aunt came into the picture.

I was at my grandma’s house for the weekend, which was pretty typical when I was young. I spent, what feels like now, every weekend at my grandparents’ house. I was very close to my cousins and they were always there with me. This weekend, though, was different, as I was all alone. I don’t remember the specifics, but I’m not sure where my cousins were. All I remember is that I was bored to tears, and listening to my parents, grandparents, aunts and uncles talk wasn’t going to cut it. That’s about when my Aunt Joanie asked, “Do you want to go see a movie?” “Yes!” I remember yelling. Movies were one of my favorite things ever as a kid, and any chance I had to go to the theaters I took!

The theater we were going to was located in the Livonia mall, a mall, which no longer stands. I had no idea what we were going to see; hell, I didn’t care, as long as I could get out of that house for a little bit. I was fine with whatever or so I thought. I remember walking through the mall to the theater entrance. I remember smelling the popcorn filling the air around me. I remember my aunt saying, “One adult and one child for Friday the 13th please.” Whoa, wait a minute, “Friday the 13th, as in the ‘Jason’ movie, Friday the 13th?” Now I, as a wee ten-year old, had no goddamn reason to be in that theater. My aunt obviously wanted to see the movie and I was the perfect movie date, whether I wanted to be there or not. 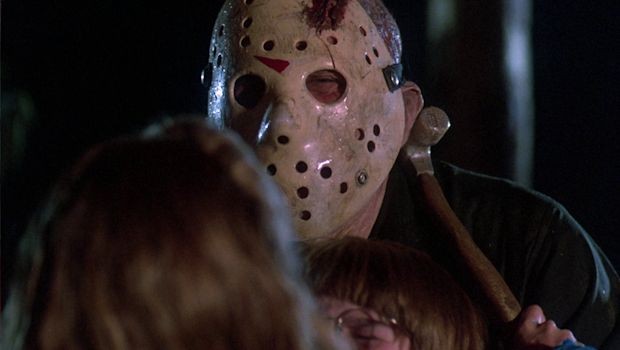 The minute the movie opened I was scared out of my mind. I didn’t want to be there at all, and all I wanted to do was leave. I couldn’t though. I was ten. Where was I going to go? I was stuck, and Jason was on a rampage, hell-bent on killing teenagers as well as my childhood. When the movie was over, I was a fucking wreck. I clearly remember crying several times, while peeking through my fingers at the screen. Fuck this movie and fuck my aunt for thinking I was old enough for it.

Thankfully, being a child, my attention span was fairly short. Not long after leaving the theater I had forgotten about what I had just watched. My cousins were finally at my grandparents’ house and we were outside playing. All was right in the world or so I thought. Later that night, when I was finally home and getting ready for bed, I remember a feeling of dread coming over me. When the lights finally went out, I was back in the theater with Jason, his machete and hockey mask, glowing in the moonlight. The bushes outside of my window were clearly his fingernails, trying to remove the screen so that he could get to me. Car lights hitting my wall did nothing to help the situation, as I could hear something under my bed, trying to escape.

That was it, I was done. Nope, not gonna happen, I am not sleeping in my room tonight, fuck this. I walked out into the living room, “Can I sleep in your room tonight?” I asked my parents, “Yes.” Phew, crisis averted. I spent the next three months sleeping on my parents’ floor. Three. Goddamn. Months. All because of a movie, all because my aunt thought it would be a brilliant idea to take a child to one of the most horrific movies of the year. 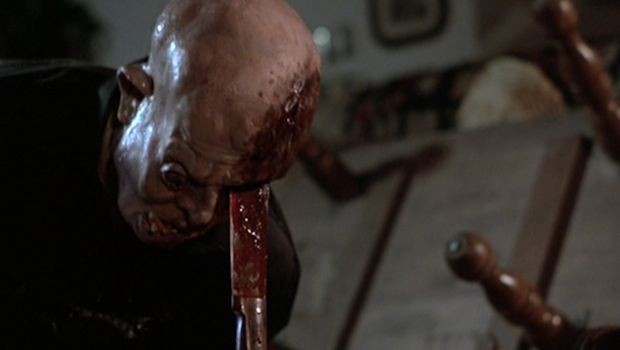 Years later, Friday the 13th: The Final Chapter (FT13 PT IV) still gives me chills. It’s not a “scary” movie, mind you, I mean, to some it may be sure, but if you’ve grown up on horror movies, FT13 PT IV is pretty tame. I think my time as a child, the memories I have surrounding that movie is what gives me that creeping feeling whenever I re-watch that movie. The Friday the 13th movies are some of my favorite horror films ever, and I can safely say that I owe my love for all things horror to my aunt, who at the time had no idea how much damage she was causing, or how much influence one low budget horror movie would have on her nephew. 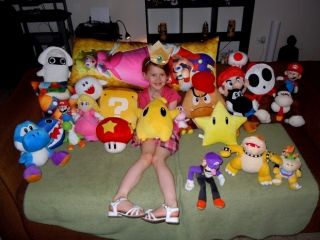