Genesis does what other Plug & Plays don't

It should come as a surprise to no one when I say that I grew up with the Sega Genesis. It would be accurate to describe the console as my first love in gaming. Even as the years have passed and other consoles have come and gone, the Sega Genesis marks the beginning for me. That's why it delights me that the console has enjoyed such longevity over ther years. But did you know that the Genesis/Mega Drive still has newer iterations being manufactured to this day? We're all familiar with clone consoles, their relative popularity with hobbyists and the slowly increasing market revolving around them. One need only to enter their local flea market or independant game store to find a small selection of them readily available. But what makes the Sega Genesis different is that their have been officially lisenced iterations of these clones available in North America. 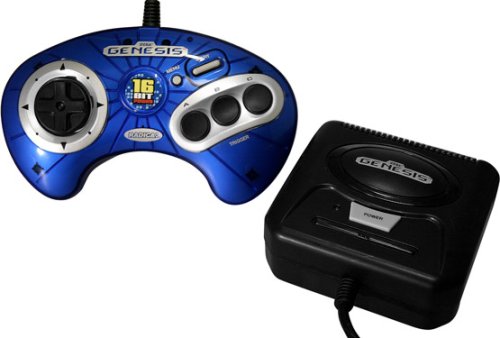 The first series of these officially licensed clones was made available in 2004. Designed & sold by Radica Games, these microconsoles were to compete with the recent influx of similar devices from Jakks Pacific. I remember seeing these readily available at the likes of Walmart and Futureshop when I was in highschool. My family had since sold our Sega Genesis and I was interested in purchasing one only to be disappointed when I returned with the necessary funds, they sold rather quickly. What makes these units unique when compared to the subsequent consoles I'm going to discuss today is that they ran on actual Genesis hardware shrunk down to a single chip, much like the Famiclones that are all too common in China. Because of this, they are incredibly customizable with a brief search showing that they can be modded to output S-Video, accept cartridges and even have authentic audio quality. It's a shame that units like these aren't available anymore. 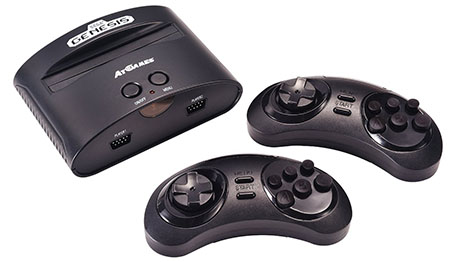 That brings me to the main focus of this article and the current manufacturer of official Sega hardware, AtGames. There is an astonishingly limited amount of information regarding their partnership with Sega and these units themselves but I'll impart with you what little I've been able to discover. It seems AtGames began circulating their version of the Mega Drive in China somewhere in the mid 2000s. Later in the decade Sega began to officially endorse their products and license their games for sale with them in North America and you can find them available in big department stores and toy stores around the holidays. AtGames version of the Genesis doesn't run on a new iteration of the original hardware but instead runs on a 32-bit chip called the Firecore. Their consoles are typically sold with 15-40 games installed on them with the deluxe models actually including a cartridge slot. Sega must have been impressed with something about the hardware (probably how inexpensive it is) because these units are still being produced.

The Firecore itself is where most criticism against the units is levied. Afterall, AtGames' build quality is acceptable, the game selection always includes great Sega titles, many of these units include expandability in one form or another (more on that later) and they're widely available at a very low price. But the console's Achillies' heel will always lie in it's emulation. In proper Sega fashion, this new version of the Sega Genesis (sometimes referred to as the "model 4") has inferior audio compared to all prior models of the Genesis. In a move I suspect has been done to keep emulation at full speed, the audio has been downsampled. When playing a variety of different games the results can vary from indistinquishable from the original to downright awful, but typically the difference isn't too bad and that's coming from someone who played a lot of Genesis in the 90s. However, this difference is what keeps these consoles from being widely adopted by collectors and purists, who would (understandably) want no difference. Otherwise, emulation is excellent, seemingly running at full speed with a clean video out and responsive controls. I'm personally delighted that these are as widely available as they are and this clip from Annoyed Gamer sort of sums it all up pretty well.

Like I said, these are available in a wide variety of different versions. There's the deluxe model with two wireless 6-button controllers and a cartridge slot. There are at least two versions with motion controllers and faux-Wii games (shudder) in addition to a collection of Genesis games. And there's the one I settled on (pictured above) that is an arcade stick with 26 Genesis games and an SD card slot dubbed the "Arcade Master". And yes, the SD card is for exactly what you think it is. The included games are an excellent cross-section of Sega arcade games (Altered Beast, Golden Axe, Shadow Dancer, Virtua Fighter 2) arcade-style games (Arrow Flash, Eternal Champions, Streets of Rage) and a few others that nicely fit the theme (Kid Chameleon, Sonic Spinball). I also made a point of thoroughly testing the SD card support and encountered no problems among the 100+ games I tested on it. I chose this version because the arcade games have always been my favourite part of Sega's library and I prefer playing old games with an arcade stick. The controller itself is surprisingly well built and the stick/buttons feel authentic and responsive through the use of microswitches.

These aren't going to set the world on fire and they're not going to replace anyone's genuine Genesis. They're not even likely to replace your Hyperkin Retron. But they are pretty nifty and inexpensive, and for my money they'll work in a pinch. These toys are a cool novelty and a great conversation piece when you have your other gamer friends over and anyone who grew up with the Genesis is likely to appreciate that it's still available in one form or another.