Thoughts on Hyrule Warriors and the "Warriors" Formula

I've been playing Hyrule Warriors recently, and I've been having a blast with it. I've actually found it much more enjoyable than I was expecting I would, especially given that I've never played any entry in the Warriors franchise before. The only game of the same genre I've played was the original Ninety Nine Nights back in the early days of the Xbox 360. Although I was always pretty confident that I would find Hyrule Warriors fun, I found it to be a significantly different experience from what I was lead to believe based on the usual spiel you hear about these games.

It's the cliché you always hear when it comes to games like this. The idea that there's nothing to them, and it's just pressing the same button over and over for hours on end against weak enemies who just stand there. I was expecting that to a certain extent, yet also hopeful from the pre-release footage shown. I can enjoy a good dumb action game if it does what it does with enough polish, even if it can't really measure up to the deepest and most comprehensive examples of the genre. 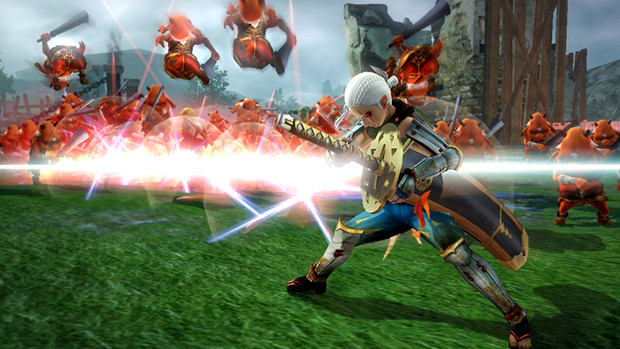 What I found was actually quite a different experience from that, and while that commonly painted image of these games was true to a certain extent, to boil the game down to that is completely missing the whole point of the experience. For one thing, the fundamental combat mechanics are more than just mashing a single button against defenceless foes. Each weapon has about a dozen combos, which each have a reasonably different effect to them, and two types of special attack. While none of this is particularly deep or hard to pull off, it does give the combat enough variety to make it feel like different situations do call for you to use different types of moves. It also helps that almost every single one is very fun to execute.

And when it comes to enemies, it's quite inaccurate to say that the only ones come up against simply stand there and pose no threat. While about 95% of the enemies you come across are like that, it doesn't matter at all. The real challenge in the combat comes from the higher level enemies. Mostly these are bosses and more powerful enemies from other Zelda games. These guys have more devastating attacks, and require you to be smarter about how you approach them. If you just blindly mash at them, then you'll probably be met with constant blocks, or leave yourself open to punishing attacks. You have to wait for openings to use the familiar Zelda items to defeat them, such as using the bow to stun Gohma at the right moment, or using the hookshot to pull aeralfos out of the sky. Going up against other major story characters also require you to keep on your toes too. These are the characters who you can unlock and play as through the game, so they behave like you do, and are similarly powerful. If you don't pick your moments and make sure to avoid attacks, you can die pretty quickly to them. These more challenging enemies come up several times in each mission, so they are hardly a rare sight. 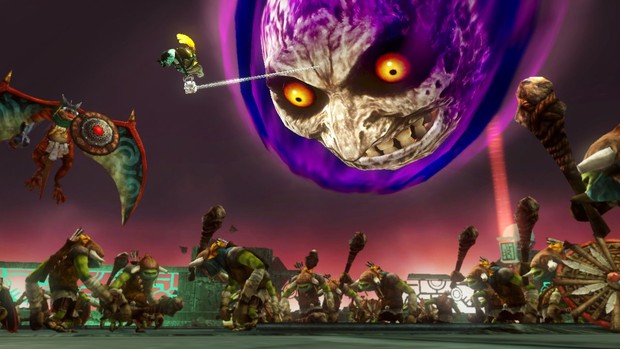 You can also do this with the hookshot.

But even that is far from the whole story about how the gameplay pans out. For one thing, there's the reason why the abundance of weak enemies doesn't matter. They aren't there to pose a challenge. They're there to make you feel powerful. To create this sense that you are an unstoppable force in battle, able to tear through thousands of opponents with no problem, because that's exactly what you are. It's catharsis. A power trip. It also makes the enemies that do pose a threat to you feel more significant as a result.

Battles are far more than simply combat as well, especially once you play some of the harder missions in the game. You can't just tear through everything in your path, making a beeline for your objective. There's quite a lot of managing the battlefield too. You have to make sure your home base, or sometimes certain comrades, don't fall to the enemy. This can sometimes be a lot harder than it sounds. You need to be tactful about how you move across the level, and what you choose to do. You need to capture keeps around your home base, to create a barrier to raid parties, and to have more control over the battlefield as a whole. In some missions capturing more keeps means an enemy boss will be weakened too. Sometimes even the time that you capture a keep can be crucial. If you're stuck in a long boss fight while your base is getting taken over, you can fail a mission right at the last moment. It creates a quasi-metagame of controlling the level and judging what threats to deal with, and when. 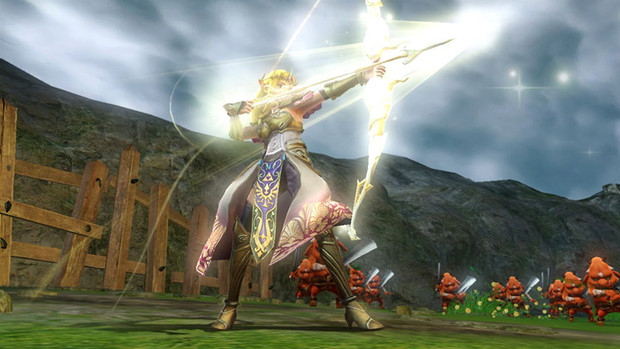 Zelda has become one of my favourites too.

That's not to say the reputation of this type of game is completely false though. Most of the time, combat is fairly mindless. While it's far from “press A until you win”, it's got nothing on something like Bayonetta. Although it's got enough going on to be engaging, and bosses add a decent amount of variation, it's still what I like to think of as a “podcast game”. Something ideal to play while listening to something else in the background. I find that it's still just as fun without that, but the game doesn't require particularly intense focus most of the time.

But even so, I've been kind of shocked at how undersold the game was by some. I know it has some differences from the usual Warriors formula, and I've even heard some fans of the series say that this is the best it's ever been. But I've also heard fans openly admit that these games are everything that their reputation would have us believe, and that there's no defending them. In the case of Hyrule Warriors at least, that is completely untrue.