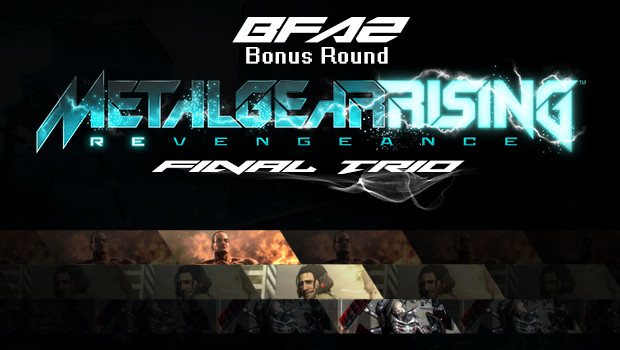 Now, it's generally known around these parts that I love bosses like a fat lady loves apples. My motivation for starting these blogs is that I wanted to take boss fights from several different games, and compare them side by side, in a largely positive light. Because of this, I never have more than one boss from one game franchise in the same blog, and I do my best not to give certain games too many repeated mentions, as I find variety important in these.

Bonus Rounds, on the other hand, allow me to break these guidelines, and make an entire blog based on a single game and/or theme. This helps me get a lot of bosses from particularly boss-heavy games out of the way. Metal Gear Rising: Revengeance seems like a good place to start, as the bosses in this game make for half of the experience.

As the silly name of the game would suggest, Revengeance is a glorious cheesefest. It's an action game that's set in the Metal Gear universe, although the game's presence is so significant that it's difficult for me not to consider it its own unique thing. A bit of cardboard box action is all it has in common with its mother franchise's gameplay, as the rest is over the top combat with swords and cyborgs.

Specifically, this blog will focus on the last three bosses, the trio of main baddies, who are the most evilest of them allest. All three of these bosses feel very climactic, and they left me entirely satisfied in my lust for destruction. Read on to find out why that is.

The rooftop of a skyscraber is a good place to fight. It's got plenty of room, a nice view and the always present danger of possibly falling off. Naturally, in a game like this, there would have to be a fight in such a classic setting. It doesn't disappoint.

After fighting your way through a bunch of crazy nonsense on your way to the top of Evil Inc.'s headquarters, you are treated to this guy, and he is not joking around. He was the first boss that killed me, as I was running out of health pretzels at the time, and apparently he wasn't satisfied doing it just once. My struggles largely had to do with his explosive shield. Dealing with said shield made the boss a bit more puzzle-y than the previous ones, since you always had to hit specific spots in specific sequences.

Simply getting the hang of this guy felt surprisingly good. The fight went from being entirely one sided to become far more equal, and it was all thanks to my own ability to learn. That's what I love about action games, especially ones as organic as this one. Sundowner might have brought me down, but I came back, stronger than ever, and took him out for good in a spectacular finish.

Sam gave me a bit of an easier time, as I had gotten a chance to gather health packs. Unfortunately, relying too much on these would later come back to bite me in the shiny metal ass.

Taking place by a lonely road in the middle of nowhere, this fight takes place in what I'm fairly sure is the biggest boss arena in this game. I don't think I ever reached the edge, assuming there even is an edge. It's not like I tried, either, as my attention was entirely directed at everyone's favourite walking Colgate advertisement.

I couldn't help but smile at how much of a dick he was being throughout the entire fight. Many of his moves involve him doing something in a very casual and uncaring manner, such as throwing you over his shoulder if you try to take him on directly. The battle even begins with him simply standing around, waiting for you to attack, which I find to be a very effective way of building intimidation.

Aside from that, Jetstream Sam is notable for being the most Raiden-like boss. He has no gimmicks like floating body parts or explosive shields, just a sword and some fast legs. It's the closest you get to an 'evil clone' fight, but I actually prefer having a few unique twists, since it adds to the fun of thinking "how do I beat this guy?" at the start.

Overall, Sam is a great boss, and makes for one of the most memorable one-on-one sword duels in all of gaming.

Considering how expensive it must be to have people turned into cyborg warriors, it seems strange that the alternative of pumping yourself full of nanomachine roids isn't the more popular choice. It clearly makes you way stronger.

Yes, it's time for Senator Steven Armstrong, one of the most popular characters to post gifs of on Destructoid's front page! His popularity is certainly understandable. Being a big, buff political figure with an agenda, and the fists of fury needed fight for it, Mr. Armstrong feels a lot like what every single goofy action flick ever has been building up to. Like, seriously, how do you not love this idea? It's amazingly insane, and it's the best possible finish to a game like this that I could think of.

Armstrong attacks by punching, kicking, bodyslamming, headbutting, throwing tanks, causing earthquakes and seemingly tearing open portals to Hell itself, as huge pillars of fire burst from the ground. He's pretty crazy, and he has at least three of those things where he attacks you, but which gives you an opportunity to turn it around and get a good hit on him. Needless to say, a lot of stuff is going on at once here, and you have to be well prepared in order to succeed.

Now, this is where my lenient use of health items finally turned against me, as I found myself having none left at the beginning. Due to this, I've lost count of how many times Armstrong murdered my unprepared ass. Death was a thing that I had to accept before I could move on, and many deaths were caused by the tank-slicery, as you have to hit a precise line of four weakpoints in very short time, which can take some time to get the hang of. In short, this battle was rough to me, even though it got better once I got to collect health within the fight itself. Still, the beating this guy was a special kind of satisfying. It seriously made me feel great about myself, in a way that made all the struggles worth it.

The music is definitely my favourite piece of the entire soundtrack. It screams 'final boss' from the very beginning, and it gets you pumped for what is basically a two man war! This song does not fuck around, to the same extent that the boss fight itself does not fuck around.

Finally, there's the way the entire thing looks. Again, as expected, it looks pretty goddamn final! Huge, intense fire surrounds an otherwise dusty, darkened arena, with metallic pieces of the previous boss scattered around, closing the area off. It's definitely a fitting look for something this intensely difficult, and it adds tons of atmosphere to an already intense finale.

Armstrong was brutal, and felt brutal all the way through. He definitely stands out as far as bosses are concerned, and deserves to be hailed among the greatest of them all.

As far as bosses go, Metal Gear Rising gave me everything I could hope for and more. I consider it a shining example of how to pull off the art of the boss fight, and I expect that it will be discussed for years to come larglely for this reason. The final trio especially was superb, with each member being vastly different and memorable for their own reasons. I am very glad that I played this, and I strongly recommend it to fans of action games.

I'm currently looking forward to the Legend of Korra game by the same developer (Platinum Games). In this one, instead of slicing and dicing, you manipulate the four elements. Y'know, earth, fire, water and... whatever the fuck the last one is. I might not be looking forward to it as much as, say, Arkham Knight or the new Doom, especially since it's a licensed game, but it looks really good so far. The combat looks satisfying, and if the bosses turn out to be nearly as great as Rising's, it will definitely be worth a purchase.

BFAZ is expanding outside of Destructoid

If you are on Steam, and you like a good boss as much as I do, check out the curator named Boss Lovers, in which games with good bosses are being picked out (Rising is on there, of course). Follow today!

If you have any games that you would like to make it in, why not let me know? I'll make sure to check out any suggestions. :)

As for now, I might be taking a longer break with these blogs. As always, comments on any of the current rounds will be read, so even if you wanna comment on something on the very first BFAZ blog, I may still respond to you, and anything on there has a chance of making it onto Round 4, whenever we may see it.