Discovery delving deeper for diamonds in the dirt? 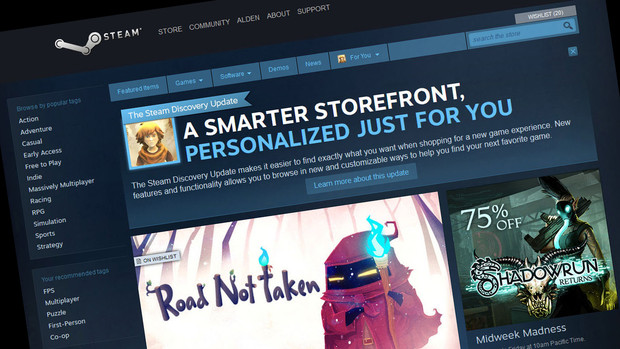 It's been a few days since Valve have rolled out their 'Discovery' update and changed their Steam storefront, the largest changes of which have been the addition of "Curators" and some massaging of the recommendations engine, and as the dust has just started to settle a few developers are starting to see the ramifications these changes have had on their Steam listings.

I'd recommed reading these few blog posts (and even the comment sections!) on Gamasutra to get an idea of just how important these changes are for developers.

First 24hrs: Result from Steam's Update by Andrew Spearin (Creative Director at New World Interactive)
The new Steam seen from a small indie by Oliver Penot (Producer and Co-founder over at Seaven Studio)

Both developers have had differing experiences, and hold differing outlooks on the changes over the long term, but one theme running through is that they are helping games with better feedback reach the eyballs of gamers.  It's easy to dismiss such exposure as important as a gamer because quite frankly we wade through dozens and dozens of game recommendations and adverts etc every time we go hunting for something to play, but when developers are saying things like "Having a front-page spot for my game is about 95% of my sales, if not 99%" and "Visits to our store page (recorded by Google Analytics) went from 5,800 on Sunday to over 21,500 on Monday [Update: Tuesday was 83,284]" it should be apparent just how important these changes will be over time.

There is still a bit of concern over how the volume of positive feedback plays in to Steam's algorithm over it's ratio, as usual Valve aren't saying, at least not yet, but that any changes of this nature are happening, even if they're not perfect, is something worthy of noting I think.

I've long had issues with the way Steam's front page works and just how infuencial it has become in making or breaking a game, though that Valve are actively trying to bring games up from the crowd on any criteria other than "This sells the most" (I'm looking at you every other 'app store' out there) is a laudable effort in itself.  The real question is will other digital store fronts attempt similar initiatives or will they continue to weild their prime placement spots as negotiating chips or even worse just let them continue to perpetuate the idea that if you're not playing what everyone else is playing you're gaming wrong by basing it completely on sales alone.

So what does DToid think?  Are these sorts of changes something you agree with?  Do they do enough?  What else do you think could be done to push against the gravity of heavily advertised games sucking up all that lovely gamer cash?