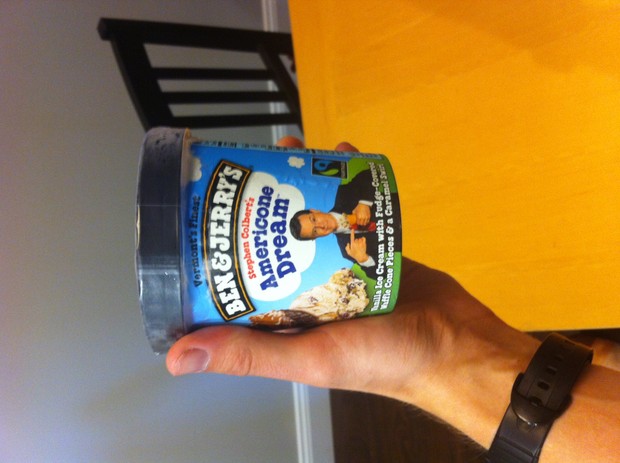 It's great! I love caramel something fierce so this was like heaven in a cone. Comedy and ice cream, is there anything the man can't do?

4. Mountain Dew
Mountain Dew is not a thing overseas. I don't know any store that sells it. I tried it here in the US because of the meme value. You know, the whole Doritos and Mountain Dew thing? (we do get Doritos in the Netherlands by the way)

The good news is that I now know why nobody sells it overseas. The bad news is that this reason is because Mountain Dew is terrible. I'm pretty sure that so far this was the only experiment that I can say legitimately failed. Almost everything else has been either good or at least edible, but Mountain Dew fucking sucks.

5. Breakfast Pizza
Come on America, you don't eat pizza for breakfast. There are rules. Just like you're not supposed to have alcohol until at least somewhere in the afternoon, there are hard limits on pizza-time. Breakfast does not fall within those limits.

No matter how great it would be if it did.

6. Burgers
I thought I knew what burgers were. I really did. You go to McDonalds, they put some meat on a patty and slap some cheese on it, and you've got a burger. This is far from uncommon even in Europe, so what could they do in the US that completely overturns this completely normal burger dynamic?

Turns out, everything.
American burgers rule.

The Netherlands doesn't have burger places like you do here. You get burgers at McDonalds or Burger King, but there's no such thing as "Bobby's Burger Palace" or "Bolt Burgers" which serve burgers topped with everything but the kitchen sink. The fact that these places tend to have much better meat also helps matters tremendously, not to mention that they make them so big they literally have to stick a cocktail pick into it just so it doesn't fall apart.

I'm especially partial to a heaping helping of bacon on my burger, but the variety of cheeses here is also nice. The weirdest one so far I've had today though; a burger with cheese and potato chips. Because that is a thing now (not going to lie either, it kinda works), and that's simultaneously weird and amazing to me. Apparently these guys once had a meeting and someone went:
"You know what, people love burgers right? You know what they also love? Potato chips."
....
"We're doing this."

I fucking love this country.

7. Lack of licorice, frikandellen and stroopwafels
It's not all good, having to eat in a foreign country. For the most part I've been able to eat what I always do. I've got my veggies, meat and potatoes, and as far as afternoon snacks go it's not like chocolate chip cookies are like this alien concept to me.

Nonetheless, there will always be some things that you miss out on. The things I miss most right now are Dutch licorice (are the Dutch seriously the only people who like licorice? The stuff is everywhere where I'm from), stroopwafels (which are cookies filled with caramel syrup and are thus the bestest thing ever) and the frikandel (an almost exclusively Dutch snack food sausage that you eat with your French fries. Trust me, they're amazing.)

- Frikandellen, one filled with ketchup, mayonaise and topped with onion.

- And stroopwafels. You have no idea how badly I want these right now.

Yet despite the incredible number of these places, I've never had Fortune Cookies before. It's not a thing that Dutch Chinese restaurants will give you, because apparently there's this sense that it's stereotypically American or something like that. I dunno, it doesn't make much sense to me either.

So after my first meal at this local Chinese place in the US I finally got my first Fortune Cookie!
...and it was empty.
I have no fortune.

9. Oreo-flavored everything
You can get Oreos in the Netherlands, but only in their normal cookie variety. It turns out though that Oreos can be put onto almost anything to make it amazing. Chocolate-centered Oreos, Oreos with peanut butter, Oreo ice cream and I swear to god the moment someone thinks to put Oreos on a burger it will absolutely happen.

It's pretty safe to say that I've never appreciated Oreos quite in the same way as I do now. They're much more delicious than I ever gave them credit for and really do make everything from yoghurt to ice cream that much better. Remember though; in the Netherlands they compete with stroopwafels, which is not a battle that one could win. Which leads me to the following conclusion: 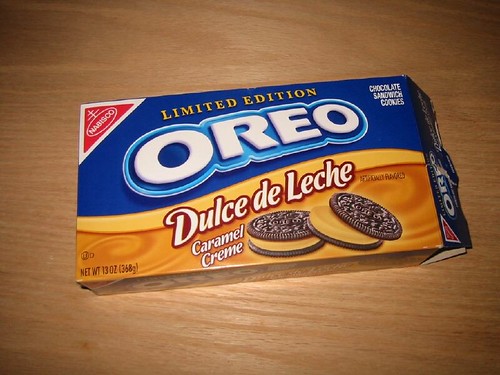 10. American Beer
By now it may start to sound like American food is inherently better than anything in Europe, or that I led a sad existence in the Netherlands before coming here. That obviously isn't true. There are many things in the Netherlands that are great as well, and not all of my US experiments have been entirely successful.

One thing in particular that Americans aren't very good at is beer. Almost all of the US beers have been decidedly inferior to anything German, Dutch or Belgian. Given the choice I will order Heineken at any bar that has it, because there's really no contest here. The only beer I've found that's somewhat decent is Yuengling, but even that just tastes like not-as-good Heineken.

You've got to step up your game guys, this is a vitally important area you're missing out on!

Upcoming experiment: Twinkies.
And those are the current results of my US food experiments! I've gotta say that in most areas you guys have done a great job, so be proud! Nobody does unhealthy foods quite as well as you do, and that's gotta count for something. I'm not done yet though, I've got a couple of months of experimenting ahead of me still.

Next up on the list is getting myself a Twinkie. Because Zombieland.
I shit you not, that is literally the reason I want one.