I'm six years old and as usual, I'm obsessing about a videogame.

The last game I got for the Sega Master System came with this huge paper foldout in the cartridge case, unfurling like a road map with dozens of tiny single screenshots of other games available for the system, each one a tiny colorful window into my prospective gaming future. It’s summer vacation, my first one from Catholic school, and I’m beyond overjoyed to get my time back. I intend to spend it all on games if I can convince my parents to buy me a new one. Well, playing games and letting my knuckles heal that is. “God loves you and that’s why he’ll make you burn forever if you ever touch your penis!”

My eyes fall on one screenshot in particular—it’s a first-person view of a dense forest, so thick the canopy of trees blots out the sky. There’s an ominous hooded figure levitating in place, cold blue eyes staring right at me, and its outstretched hand seems to be reaching for my soul. Above it a word box labels the monster as EVILDEAD and says it has 30 HP, whatever those are. The game is called Phantasy Star. I instantly decide I must experience whatever perverted nightmare it promises to deliver me. 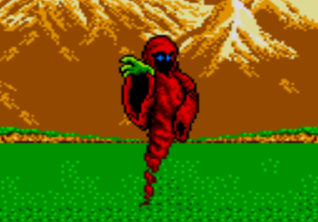 "Brother, can you spare a MESETA?"

“Mom, I really want this game. Can I have it for my birthday please?” I beg. My mother replies automatically as she had countless times before whenever I hounded her for a new game, “We’ll see,” her face in the same expressionless stare that comes only with the fatigue of raising nine children. My head translates this as “Abso-fucking-lutely, I’ll convince your dad to get it for you somehow even though it’s stupidly expensive and we have buy clothes for your eight brothers and sisters before school starts again.”

Then my older brother pipes in and crushes my dream. “You wouldn’t like that game; it’s too complicated for you.” Naturally, it makes me want it more, and it makes me want to strangle him for saying so. “You’re ruining it! Mom said I can get a new game, you imbecile, shut up!” I think.

Pictured:  me and my brother, most days.

A few days later another comes home from school with the coveted cartridge itself, borrowed from a friend. He pops it in the slot and turns it on, and it takes all the energy in my body not to rip the controller from his hand when the title screen comes up. He starts the game, and I watch as he guides a woman holding a sword out of a village, crossing a grassy plain. The screen shifts, and suddenly we’re staring into the face of a gigantic housefly, which the game calls a SWARM. “That’s not EVILDEAD,” I think, “How many monsters are in this game? I bet, like, at least twenty.”

The fight plays out. I watch a line appear, then slash across the swarm and its HP meter drops from 8 to 5. Then the SWARM flaps its wings, and another HP meter at the bottom of the screen, below the word ALIS, goes down similarly. “Oh,” I think, “HP is your life meter, and that girl is ALIS.” Seeing ALIS was near death, my brother opened a menu, selected something called a COLA which restored his HP, and went back into the fray. Three exchanges later, the SWARM went down. My brother opened a treasure chest it left behind, advanced a level, and collected some money called MESETAS. From there, he took ALIS up to a blue tower and I stared in amazement as the screen changed, displaying a dark blue maze you could walk through and watch the walls go by with each step, just like you were there. After a few paces, he came to a double door with a gargoyle’s head grinning menacingly on either side. My brother hollered out for my other brother to come quick and look. “I think it’s a new area!” He shouted.

Just like that, the glory of the turn-based, first-person dungeon captured my impressionable little heart and never let go.

I still feel like this whenever a new one comes out.

I spent the next few days snatching every free second I could to get a chance at the game when my brothers weren’t around. I was moved by the murder of ALIS’ brother and vowed to help her seek revenge against the evil LASSIC. I snuck out of bed and stayed up late, playing it practically on mute so as not to disturb anyone asleep. I took my dingy leftover school paper and completed the dashed middle lines meant to help with penmanship and scribbled maps on them, each square representing one step. I played through the list of enemies I’d encountered again and again in my head, desperately trying to figure out how I could ever become strong enough to beat the harder ones on the beach, like the FISHMAN. I found a way to get a passport and flew to a desert planet, trading a pot I found in a secret cave to a villager there for a new party member, a talking yellow cat named MYAU. My brothers had to know what I was up to since anytime they played they could see my save file, but they never tattled. I had proven to them the game wasn’t too complicated for me after all.

A few weeks later, my birthday came, and I got to hold my very own copy. I read the manual cover to cover countless times as I waited for my brothers to finish their turns, and I stared at the pictures on the back of the box, relishing every detail.

To this day, hearing the theme music is a magic spell that carves through time and space and puts me back in my tiny six year old body, when I learned that those little square miracles called videogame cartridges could do more than let you race a motorcycle or hunt safari animals. You could explore a whole solar system and fall in love with its inhabitants.

I'm a lover of music and words.