Unpopular Pokemon (And Why I Love Them!) 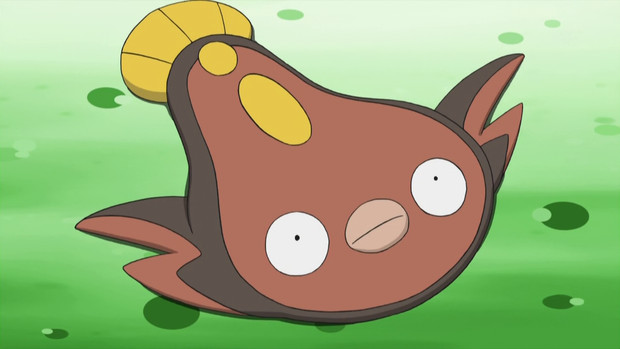 With a bestiary of  719 (and counting) different species, the Pokémon world is full of wonderful and amazing creatures.  Many of these monsters find popularity for their sheer power, awesome looks, competitive use, or adorable designs.  But not every Pokémon is a top-tier powerhouse or fan-favourite master of marketability; for every Gyarados, Garchomp, and Gardevoir you see, there's a Spinda, Stantler, and Seviper that nobody really seems to care for, living in the shadows of mediocrity.  Even if it can evolve into something better, some Pokemon can't seem to catch a break such as Noctowl, Lickilicky, or Golduck - Pokémon that became stronger but were still outclassed by similar, stronger, more popular monsters.

Some people complain about their "lackluster" designs.  Others insist that they have no place other than just to fill in space on the Pokédex.  Me? I love 'em all.  Even Stunfisk, as seen above here.

In fact, there's three big reasons why I love all these Pokémon -  that they're just as integral to the franchise to me as the most popular or powerful 'mons out there. 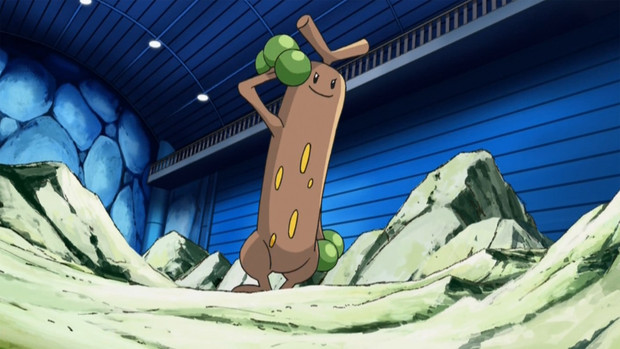 Of course, if it's your first playthrough of any particular Pokémon game and you're not familiar with any of the series staples, chances are you're going to spend some time figuring out which Pokémon are strong and which ones are dropped early on in your adventure.  Typically, if it's a Bug Pokémon you found in the first patch of grass you found in the woods, you're probably going to dump it into Bill's PC about halfway through your adventure because the Psychic type you found 9 hours later is much faster, hits harder, and has better stats overall.  Same deal with the Rattata and Bidoof you found within the first 10 minutes of your adventure: they're not going to be sticking around for long.

Tired of using Gardevoir? Try a Grumpig instead!
Bored of Empoleon? How about raising the strongest Lumineon ever!
That Sentret you caught in the first patch a grass? Use it against the Elite Four!

With different stats from what you might be used to and different type combinations, you may be surprised just how much of a difference it can make in your playthrough.  You might find certain Gym Leader battles slightly harder, especially when you're not one-shotting everything with familiar, more powerful Pokémon.  As a bonus, some of these less-powerful Pokémon gain levels faster than others, meaning you'll spend less time grinding levels in the grass or using the VS Seeker far less.  Finally, there's the satisfaction that comes from beating the game with a select team of weaker Pokémon; imagine being the person that manages to beat Red atop Mt. Silver with a Seaking, instead of Gyarados or Feraligatr or the like.

Push yourself to use your favourites instead of what you know as most powerful.  Challenge yourself to use the Pokémon others would not.  You might just discover a more fun way of playing the games. 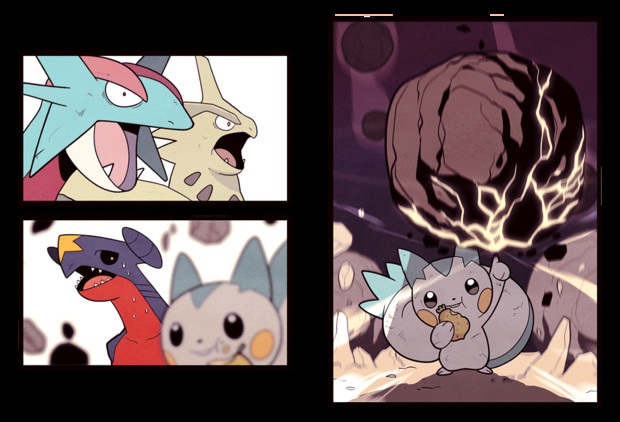 Chances are, if you're familiar with the competitive scene you'll know that there's plenty of commonly found Pokémon used by players.  Pokémon like Garchomp, Talonflame, and Kangaskhan are fairly common amongst competitive players, and for good reason: their high stats and excellent movesets propel them to the front of competitive battling.  More and more players flock to these powerful monsters and use them, often without fully utilizing their potential and sticking them in because they're strong.

Again, this is where our "mediocre mons" come in.

If my battles against Japanese players on Pokémon X and the people at Pokémon Showdown have taught me, sometimes the most dangerous Pokémon are the ones you least expect.

You thought Miltank to be subpar, what with Pokémon like Mega Kangaskhan tromping around the battlefield? Watch one survive your Mach Punch and then completely decimate you with Counter, and then proceed to heal herself back up with Milk Drink.

Thought Quagsire was the least of your worries as you continued to boost your Tyranitar's attack and speed? Too bad your buffs are made moot with Quagsire's ability, Unaware, and she's about to outlast you with Toxic and Recover.

And then there's the 2014 Pokémon World Champion, Se Jun Park, and his awesome Pachirisu, who shielded her teammates in battle in a way no one saw coming, much to the delight and admiration of viewers across the world.  Not many electric rodents in the series can take the full brunt of a Draco Meteor and shrug it off like it was nothing.

None of the Pokémon I listed are extremely powerful on their own.  They are often outclassed by other Pokémon in similar roles when you line up their stats and numbers side by side.  But, in the right hands, their unpredictability in an environment full of common Pokémon gives them the game-changing element of surprise, especially against players unfamiliar with their strengths.

Without the complete bestiary of the Pokémon series at your disposal, there would be no freedom of choice and everyone would truly be stuck to using the same powerful Pokémon over and over again. 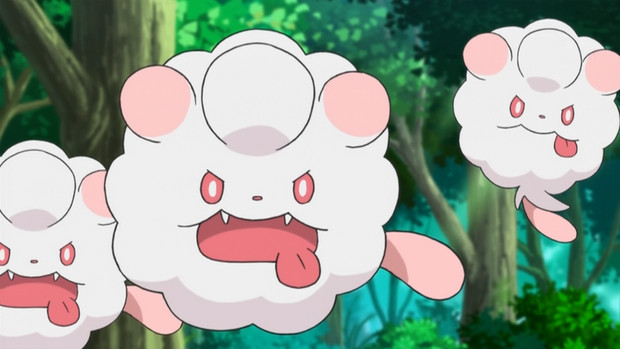 Pokémon designs are often the subject of debate amongst fans.  For example, some people prefer the designs of the original 151 Pokémon over everything else, while others prefer the Pokémon found in later releases like Black & White.  Obviously, art is subjective and Pokémon designs are no exception, but I'll come out and say this: I love 'em all.  I appreciate all the work that goes into the designs, whether they're simple or complex, adorable or absurd, or downright fierce.  Big or small, short or tall, each new addition is welcome, as far as I'm concerned.

As a kid, monsters in RPGs I'd seen at that point usually came in a distinct flavor, bordering on a more Dungeons & Dragons or Tolkien-esque vibe.  This includes the likes of the Dragon Quest/Warrior series back in the day which, despite a  bestiary created with the distinct Dragonball-style of Akira Toriyama, draws many elements of traditional fantasy for its monster designs.  Back in 1996, I had my mind blown the first time I played Super Mario RPG: Legend of the Seven Stars, a game where I was attacked by orange guys with giant forks, a four-eyed cat/dog beast with a huge appetite, and a kleptomaniacal crocodile wearing a top-hat.   Then, two years later, I first laid eyes upon the original 151 Pokémon.

A frog with a plant on its back? A turtle with giant water cannons? A mouse that shoots electricity? A giant purple-bunny-lizard thingy? This blew my 12-year-old mind right out of the water.  And, for the years to come, the designs continued to impress and inspire me.  I emphasize inspire because it was these monster designs that fuelled my imagination, to constantly make doodles in class and at home when I wasn't too busy with homework, friends, or gaming.  From monsters to characters, fake-Pokémon or my own original creations, the series left a footnote in my inspiration portfolio.

As the original craze died down and the Pokémon franchise settled in as a main staple franchise for Nintendo, I came to learn and love each new generation of Pokémon games and the expanded roster that came with them.  While others balked at the designs of, say, Kyogre and Groudon for being "too much like Digimon," or that the likes of Starly, Staravia, and Staraptor had no reason to be with the Pidgey family already in place, I appreciated all new designs from an artistic point of view; in fact, they only served to fuel my creativity further, as well as expand my knowledge of mythology from around the world as I continue to learn what their designs and radical evolutions are based on.

Without the likes of Pokémon like Electrode, Granbull, Luvdisc, Bronzor, Basculin, or Swirlix, the Pokémon world would feel a lot smaller, as well as feel creatively devoid without their unique presence.

So there you have it!  While I enjoy using many popular Pokémon for my offline and online teams, I still appreciate the less-popular monsters that don't get a lot of love or attention.  Even today, I find it amazing what skilled players are able to do with them in battle, as well as the quirks in their designs that allow them to stand out amongst the hundreds of other Pokémon, be it artistically or their individual game mechanics.  While some decry their existence, I welcome them with open arms: to me, they're just as important to the games as the box-art legendaries themselves.

I enjoy many different games and franchises but, above all, I love talking about the Pokémon series the most - so much that I started my own website after making a few blog posts here!