ADDENDUM: Linkle IS female Link after all! 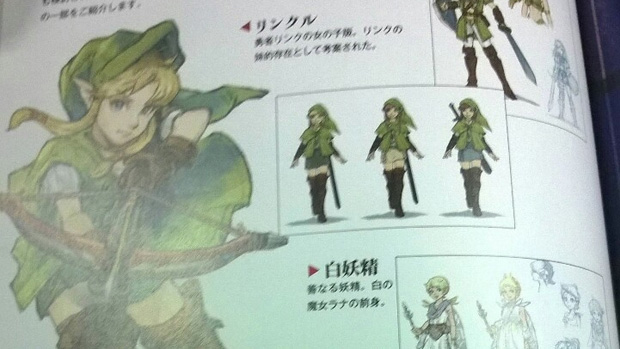 Hey, everyone! As you might have noticed, I've decided to start doing musings again in my spare time. It's been too long since I've written anything that wasn't weighed down by deadlines or the need to be run past a group of copy editors. I had forgotten just how much fun blogging for the sake blogging could be, so expect to see more of this in the near future.

As for the article I wrote yesterday, I chose a sensitive topic to get my motor running. I think it went really well, all things considered. It got a bit heated in the comments, but that's okay. It's all part of the festivities.

But I do want to return to that earlier article for a brief moment. A short while ago, I came across some critical information regarding Linkle, the gal in green from the Hyrule Warriors artbook, and I think it deserves an addendum. So... here we go.

In my article, I linked to a post by Steven Hansen about the page from the Hyrule Warriors artbook with the character design in question. His post originally stated that Linkle was female Link, but a number of commenters pointed out that the Japanese text indicated that this was actually a relative of Link -- a sister or daughter, perhaps -- and not Link himself. Thus, Steven updated the post with the corrected information.

This piece of news resurfaced in the comments section of my article as well. The argument was that Nintendo wouldn't dare make an actual female Link, so instead here's this new sister character as a concession. Link would still be the strapping young lad he's always been, and those who desire a playable green-clad female would get his twin. Everybody wins, right?

But now the plot thickens.

The fans who first spotted and shared the finer details of Linkle's identity had misinterpreted the text from the book. Kotaku's Brian Ashcraft, who's fluent in Japanese, was able to decipher the page completely and get to the bottom of the mystery once and for all.

It turns out that Steven's original story was true all along. Linkle is the female version of Link! The text explicitly states that this is a "girl version of hero Link." Why the different name, in that case? The simplest explanation is that "Link" is a masculine name, so the character designer came up with a feminized version -- just like how there's "Ramon" and "Ramona," "Gabriel" and "Gabrielle," and so on.

Okay, then where did the idea that Linkle was the male Link's sister come from? Someone apparently spotted the kanji for "sister" and jumped to conclusions without the proper context. The complete translation of that particular line states that the character was "devised as being little sister-like" -- like the girl next door you knew since childhood but for whom you hold no romantic attachments (or do you?).

Of course, you won't find Linkle in the final version of Hyrule Warriors since that page of the artbook was dedicated to rejected characters. But this clarification does clear some misconceptions that have been floating about since her discovery.

I think this all is fascinating for two big reasons. One, the idea for a female incarnation of Link was proposed very early in the game's development; she even received the full concept art treatment before she was quietly shelved. I don't recall if we've ever come this close to a proper female Link before.

Two, despite being the Link through and through, there was just enough thought given to her conception to assign Linkle a different persona than male Link. That she was to come off as a "little sister-type" to other characters in the game made her unique, even if just in a minor way.

Why do I think she was ultimately scrapped? My guess is that Eiji Aonuma had the final vote in this decision. Maybe he saw some merit in the idea but figured that a spin-off developed almost entirely by a third party was not the proper place to explore that avenue. Clearly its not just the fans at home who want to see a female Link become a real thing anymore.

We're at the cusp of something great here. I really do think that we will see a female Link in our lifetime.

(Also, I'm shocked that even though the Kotaku article was posted last Monday, nobody here caught wind of it. Your web fu is getting weak, denizens of Destructoid!)
Login to vote this up!