6:54 PM on 08.21.2014 (server time)    0
When a game is made in today's times, it is almost a given that at some point in development, the game designers were sharing a good laugh from something they found online. One of the more popular things of course is the hijinks of memes. Everything from felines yearning for a hamburger with cheese or a scumbag wearing his Yankees cap sideways and informing someone of a real terrible action. One doesn't often get to experience the jump from internet shenanigans into video games, but that's exactly what we're going to find today, in one of the darkest and most unlikely places. Put on your coolest digital shades, we're heading into the world of Deus Ex: Human Revolution.

One of the (probably augmented) legs of the journey has Adam Jensen looking for a hacker that's on the run. After sneaking/rampaging his way through the security, he will come across the work area of said hacker. While examining his set up, there will be a series of sticky notes on display. One in particular, has a phone number and a name (a very awesome name if I do say so myself) with a drawling beneath it. The drawling is that of the "Forever Alone" face on one of the internet's most well known memes. Plenty of fish out there in the sea, buddy. 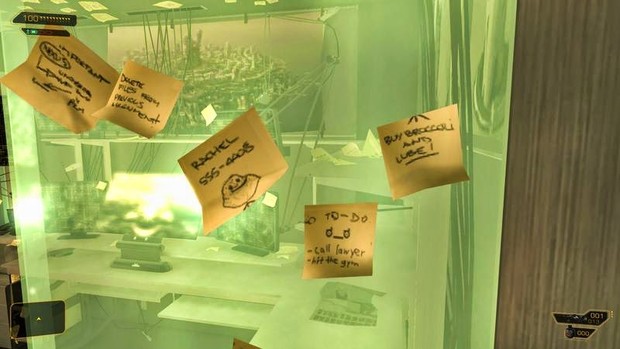