How Does Your Game Keep You Contained? Part 1

10:14 AM on 08.21.2014 (server time)    0
A lone hero seeks adventure in a dangerous world. In one hand they clasp an ancient sword made from the devil's weirdest nightmares. In the other hand they hold a giant handgun so powerful that it doesn't need to be loaded to kill from two miles away. From head to toe, the hero is clad in armour that prevents attackers from remembering why they were even mad in the first place. There is so much arcane magic coursing through the hero's veins, that one sneeze can level an entire cinema. Only a 1 or 2-screen cinema, but it's still pretty cool when it happens.

Yet today, the hero will meet their match. No enemy, real or imagined, has ever managed to best this courageous, mighty and inexplicably handsome warrior. Today is the day when the hero faces...a fence which is slightly too high to jump over. 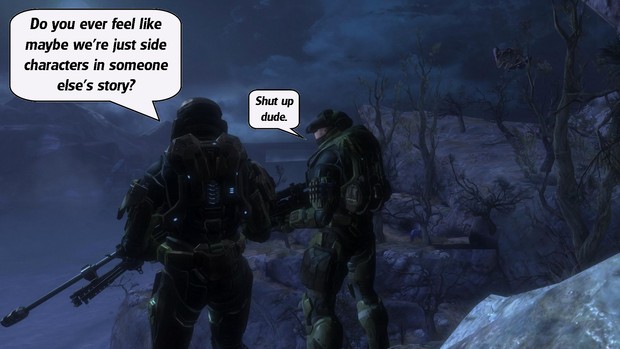 Next week I'll move on from directed games and celebrate the ways more open worlds or free-roam environments manage to keep the player contained without detracting from the fun. Even the largest, expansive worlds have to find a limit. Before then, I'm hoping that you can think of other great ways that games keep linear worlds feeling filled-out, and contain the player without annoying them. Leave a comment below.

I could go on to make fun or criticise games that get it wrong, but that's not really me. Returning readers will hopefully know by now that, apart from the occasional cynical jab or a throw-away negative quip, I'm not one to attack games with any real venom. However, if you do have some amusing bad examples, find a particular game 'containment' irritating or disagree with anything I've said above, you should definitely comment too.