12:52 PM on 08.17.2014 (server time)    0
Space Marine is a masterpiece. �There, I said it. �I even kind of mean it. �I played it recently and remembered just how much I loved the game, and how sad it makes me to know that THQ isn�t getting a second shot at the IP. �Hell, if anyone understood why the game was so fun, I wouldn�t mind a sequel from almost any studio...although if it were Telltale, I probably wouldn�t go for it. �So what makes it so great? 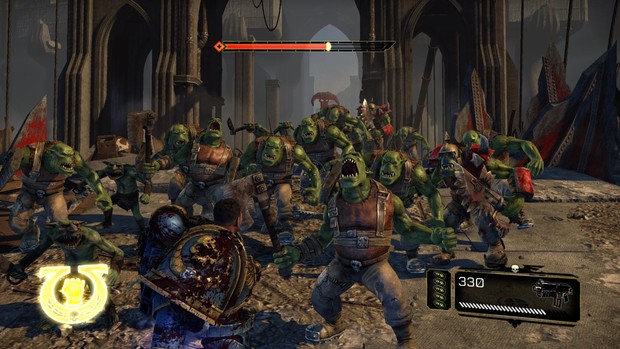 There are a few other small details that I wrote down that I didn�t find a good place to fit in anywhere else, so random section ahead: �After blowing up and/or dismembering one of the hundreds of enemies, your armor will have patches of blood that fade out over time. When your gun starts to get to the last few bullets, it gives a noticeable audio cue of the last bullets clicking. �Running just feels like it has a weight to it. �The most important �minor� detail though, is that it feels close to the source material. �The 40k universe has a ton of lore, and they drop a boatload of references to it. �More than just throwing out some lines to appease fans though, you see the different factions from the universe represented, and you can almost feel their point values. �You have the Imperial Guard - weak humans, easily overwhelmed by the same number of orcs. �You have goblins arriving in hordes that even the smallest bullet can dispatch. �Then you have the mighty Space Marine - a squad of 3 elite soldiers capable of rumbling with the best of them...until the Orc heroes start to show up. �Its hard to put into solid words, but it just �feels� right to the source.

On the thematic note of being a Space Marine, the game always makes you feel like it. �It is ridiculously empowering. �I have heard it compared to God of War more than a shooter, and while the combat is more simplistic, it isn�t completely off. �There is no cover, and the combat isn�t quick and messy. �The combat is often up close and personal. �It is more Doom than Call of Duty, but more of a Melee than a shooter. �Even still, comparing it to a game like Serious Sam - hordes inspire a smile more than they inspire panic. �As the enemies toughen, your arsenal, too, gets bigger, and better. �You can see the progress in you as a player, as well as the tools in your kit.

If that description hasn�t sold you on the game...maybe you would want to check it out on Monday�s Streamtoid - starring me! �The only downside of the game is that it is relatively short, so I am probably going to play it for another 2 weeks before completing it! �I decided to play it as something fun for the show, and remembered just how awesome the game really was. Oh, and you can literally pick it up for 10 dollars. �Do it.
#PersonalBlog
Login to vote this up!