10:02 AM on 08.12.2014 (server time)    0
Once upon a time, not too long ago, video games would reward you with fun little bonuses. These bonuses would often vary. Sometimes, it would be an unstoppable super-weapon (my favourite examples including Doom's BFG and Ratchet & Clank's RYNO series), or something else that affects gameplay. At other times, it may simply be a new outfit. While I'd argue that the former is of much greater value than the latter, there is certainly room for both, and both used to give a sense of achievement. Back then, having these things always meant that you had earned them, and done so through the game itself, which you already had fun playing. It was the ultimate win-win, basically. Rewards earned by having a good time. Brilliant!

Then the age of DLC came, and while I like the idea of DLC as a concept, it has been heavily abused from the very beginning, and this has only gotten worse over time. Good DLC does exist. It exists in the form of additional levels, chapters and missions. Meaningful content applied on top of an already complete package, like it should always be. But it's so rare that this is the case.

No, it seems that most DLC comes in the form of the rewards that used to be part of the once complete package. Now, it's no longer unlocked by gameplay, but through pre-orders or additional payments. The option to unlock it traditionally isn't even there anymore. The win-win has become a lose-win, as you now have to sacrifice something before you gain something in return, within the game itself. Costumes no longer say “I won this”, they say “I paid for this”, or “I pre-ordered”. It shows off your willingness to pay for things you don’t need, rather than your skill at the actual game. This greatly cheapens the value of additional costumes. They become a complete non-entity to the game, something that is tacked on and doesn’t add anything meaningful. You’re only being rewarded for being a profitable customer. 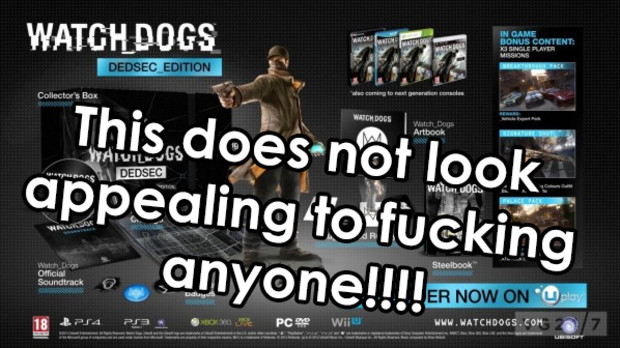 I’d also like to thank those developers who haven’t given in to the peer pressure, and kept their games intact. Ratchet & Clank never compromised its values, and I largely respect Insomniac for this. Other, similar mid-tier companies do a good job too, and small indie studios are very good at keeping their games as wholes. Those who actually care about doing good business are still around, which is great! It’s just the fact that the assholes still see success that continues to bother me. Hopefully, they either learn from their mistakes, and start caring more about quality, or they crash and burn like THQ did. Eventually, either has to happen.

Because we’re not stupid!
Login to vote this up!