For Your Re-Consideration: Crystal Monsters

Gameloft has a dubious standing in the game's industry. While they're known for almost consistently delivering a respectable level of quality with their efforts, the studio is almost universally looked down upon for what most feel to be an uncomfortable level of unoriginality or even downright plagiarism. However, littered throughout their catalogue are some of the best efforts the handheld scene has ever received, especially in regards to mobile phones. That of course brings me to the subject of my article today, Crystal Monsters. A brief examination of the game's promotional material would lead even the most casual of gamers to conclude it was simply a�Pok�mon rip-off of sorts. They'd be correct, at least, mostly.

Crystal Monsters is a curious release, initially made only available to Japan in 2008 for mobile phones under the title Monster Chronicles. Crystal Monsters�was then ported to Nintendo DS in 2010 and released by way of the now almost irrelevant DSiWare service. It's not that I can't understand Gameloft's choice to make the title available for DSi, it's an inherently natural fit. What I can't understand is why they would choose to release it exclusively on DSiWare in our territory and entirely forego a release on Google Play or the iTunes App Store. On the Nintendo DS, Crystal Monsters would essentially have to compete for players' attention with the perpetually red-hot�Pok�mon franchise. On the mobile market, they would have almost no competition. Especially back in 2010, it had the opportunity to print money. Instead, Crystal Monsters�will have to settle for being a largely forgotten footnote in the history of video games. 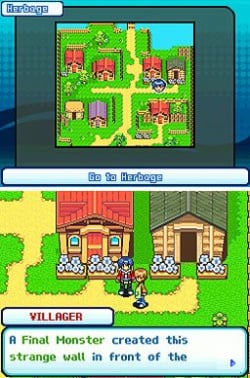 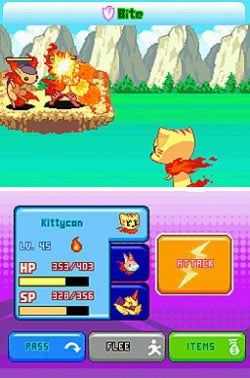 The game opens with a short text crawl explaining that there are many different realities and that in this story two separate realities have come closer together. One is a world much like ours and the other is a world inhabited by monsters. Your character is something called a "Neo-Seed", a genetic mutation that can see these creatures as they naturally roam the countryside. These monsters are otherwise invisible to normal people who call themselves "Pure Breeds". Many Pure Breeds blame the recent appearance of monsters and Neo-Seeds for much of the world's problems and some radicals have formed a political organization called the Pure Faction to lobby for the control of breeders and their companions. When your home town's celebrity breeder is injured before a regional monster tournament you're given one of three monsters to start your own career as a breeder and are promptly sent in his place to compete. However, it isn't long before you're swept up in an adventure to save the world from certain doom. 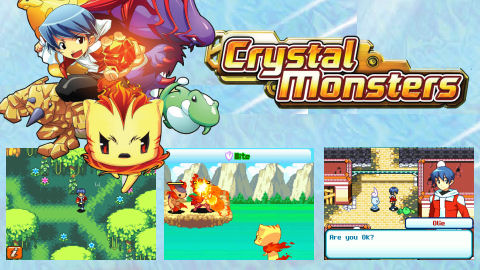 In short, the story is a bit ridiculous. But it is, at the very least, somewhat original and a great starting point for a series of interesting events. It's easy to imagine this as the set-up for a children's anim� series. The game's presentation has taken significant inspiration from�Pok�mon but the gameplay has more in common with the Dragon Quest Monsters�series with a greater emphasis on breeding and three vs. three combat. The differences persist as Crystal Monsters�features a much more involved capture process. The game's creatures are effectively divided into nine elements and each requires a unique stone to capture. Later in the game, a crystal will prove to be quite ineffective when used by itself and capture will require the use of other items in conjunction with them. Also, you'll rarely find yourself in competition with other breeders, instead most battles will be with wild monsters or boss monsters. That's not to say that other breeders will never challenge you to a fight (Pure Faction will challenge you themselves in regular Team Plasma fashion), they simply do not make up the bulk of your obstacles. 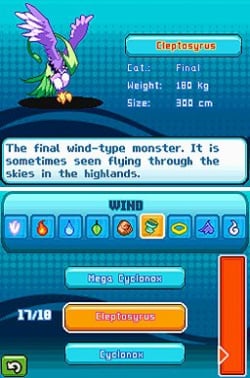 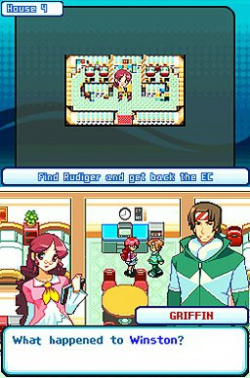 Speaking of combat, that's where Crystal Monsters�truly excels. Players need to exploit type advantages to chain together attacks much in the same way the�Shin Megami Tensei�series requires. Successful chain attacks are accomplished with on screen button prompts akin to Super Mario RPG. And your plan of attack will have to be thought out beforehand because you're limited to a team of three monsters and you can only have a grand total of twenty captured monsters. Your inventory requires similar scrutiny as you're limited to carrying a grand total of only fifty items including consumables used in battle. Halfway through the game, my inventory was always full and I was forced to carefully weigh the pros and cons of discarding any item in favour of another.

The systems in place are different enough to make the game feel fresh and playing Crystal Monsters�for the first time was invigorating as I was flying blind (there is little to no information available online regarding this title outside of a half-dozen reviews and some dead forum threads). The creature designs are also similarly praiseworthy as they manage to be original, distinct and visually appealing. This game had been in the corner of my mind since first seeing it on the eShop and I'm glad I finally took a chance on it. At only $5 USD it comes highly recommended and I hope that it's sequel is eventually ported as well.

Crystal Monsters is available now on the DSi Shop for 500 Nintendo Points
Login to vote this up!