1:06 PM on 07.31.2014 (server time)    0
Hmm...I just realised that the title seems excessively profession-of-love-y. Nevertheless, I shan�t hide this secret from the world. I�do�love�Catherine, and believe it or not, it is my favorite game of all time.

I�m well aware that no one hated�Catherine, what with it�s flurry of 7�s, 8�s and 9�s from reviewers, but heads usually turn when I tell people that it�s my favorite game, and somewhat understandably. Without having played it, the marketing for this game made it seem much more - even comically - sexual, infatuated with sex�in and of itself, and generally something that would be classed under one�s guilty pleasures. The reality is quite different, and what�s hidden underneath is an amazing puzzle game with gorgeous visuals, fantastic music and excellent writing.

At the end of the day, even if people didn�t hate this game, I just want an excuse to write about it. Allow me this, won't you? 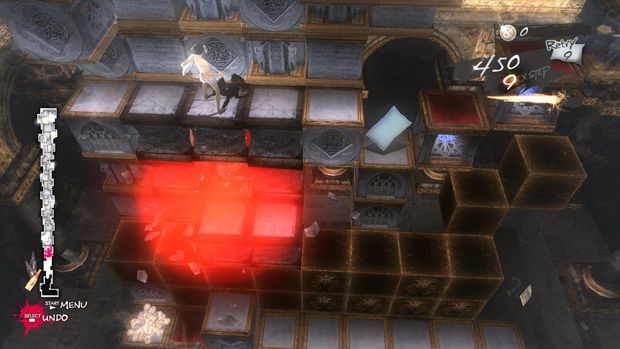 And fuck me, those nightmares certainly are frantic. They�re not necessarily scary, but it�s fast-paced action; the image of hounds chasing and snapping at your heels at each moment wouldn�t be far off from understanding the pace of these sequences. What stems from that, however, is exciting gameplay. You must be on the move at all times, learning to simultaneously be observing and recognising patterns, and deploying skills that you�ve learned to scale those blocks. It only improves as the game progresses, with more block-types being introduced, as well as an array of obstacles. However, skill and improvisation remain at the heart of this, being able to assess the situation and quickly use the most efficient means to climb up.

One thing I�ve always hated about fighting games is the requirement to know specific button combos, especially those long and complicated ones. What�Catherine�uses is not knowledge of a series of button presses, but knowledge of tricks, of how to manipulate the environment and morph it into something scalable. If you�re smart enough, you can suss out how to do these �moves� before they�re taught to you in the game, as they are natural ways to move around. They�re not a button combo that is locked from you until you get to a certain point in the game, nor is it something that requires guesswork.


One of the first techniques you're taught in the game

In fact, many techniques are not taught-in game, and have been discovered and logged by the community, through experimentation and practice. And that is, in essence, what�s great about it. This very simple and elegant mechanic allows freedom of expression from the player, and that�s what, to me, drives the gameplay.

Needless to mention, too, are the slick graphics,�the�diverse�music�used,�and the well-written and memorable quirky characters that you interact with at the bar in human form, and their sheep counterparts during the dream (sounds kooky? It is!)

Perhaps it is�just�the time at which I played�Catherine, a thoroughly unique affair after having played the (relatively) straight-faced grunts that are�The Last of Us,�Uncharted 3, and�Heavy Rain. Perhaps it is�just�that Catherine came at a time, where it stood out from the crowd and dazzled me with its dashing personality and damn fine weirdness. Perhaps, though, it isn�t�just�that.
#OpinionEditorial
Login to vote this up!