No but I love top 10 lists. Simple and straight to the point, without all the faffing and essay structuring. So here are my quick top 10 chiptunes. They are in order of awesome, of course.

I�ve not played Shovel Knight yet. I really should though, I think we�d get along so well (GajKnight�Shovel Knight, geddit, yeah, gg, job done) but I�m holding out for the Vita release. I did download the soundtrack the moment it became available though. Jake Kaufman OST�s are day 1 buys for me, no doubt, and Shovel Knight just didn�t disappoint even slightly.
�
I could fill this list just with Kaufman tracks but suffice to say, he�s truly a gifted artist and I hope he makes sweet, sweet music directly into my earhole for a long time.
�
Directly. Into. My. Earhole.

YES I KNOW IT�S NOT A CHIPTUNE! It�s still really, really amazing though. So let us just pretend it is and save ourselves 2.5 minutes of arguing. Also I couldn�t think of another joke so there�s that. Humour�s hard yo.

Sub-Terrania�s another game I�ve never played. I should really play these games to hear the context of their music. Regardless Funky Writer is a really good track, from a respectably good soundtrack. It�s got a foreboding atmosphere lurking behind all dat funk and bass.
�
Interestingly, Jesper Kyd composed this soundtrack. He also composed some of the Ass Creed and Hitman soundtracks, as well as Borderlands, State of Decay and Darksiders 2 (totally did not steal this from Wikipedia).
�
I also thought he developed Lone Survivor but that was Jasper Byrne. Easy mistake I guess. Not really. I�m dumb.

I couldn't find a proper Youtube video (they all sound funny) so here's a direct link to the album on Bandcamp.
�
7. 1001 Spikes-Aban�s Theme (Both versions)

Another game I�ve not played! This is becoming a problem now.
But regardless of whether the game is good or not, the soundtrack is REALLY good. Aban�s theme especially is the best track in the album. Misoka�s version is classic stuff, great backing beat, lovely synth on top and all wrapped up with really good production.
Then the Key version comes after and dials it upto 11. The backing track is more aggressive, the synth is even synthier(?) than before, it�s just so good girl. Love it.


�
6. Elemental Master- Until the End of the Earth

I�ve talked about this track and this album in my last blog (read it now nerd!) so I won�t go into too much detail. Suffice to say that this track made me go and hunt down the iso so I could play the actual game. Totally worth, it, fantastic game, even better soundtrack.


Extended version cause WHY NOT?
�
5. The Revenge of Shinobi- China Town

I have a love-hate relationship with Revenge of Shinobi. I�ve never beaten it, ever. It was the first game I ever played and it almost turned me off of games completely due to how BALL-BUSTING hard it is! I�ve recently bought it on PSN and died countless time just trying to get to the second level. Argggh, this game man, this game. I�d call it cheap and out-dated but I�d sound like a lame ass baby.
�
But one thing is clear. The soundtrack kicks ass. And China Town especially. It has that old Japanese feel to it with the oriental sounding tones but the sick bass and poppy sounds lend a modern semblance. Essentially this is the perfect track for an old-school ninja fighting in a modern city. One day I will know that feeling.
�

This is another track and album I covered in detail before (go read that too nerds!)
So here�s Altered Jesus. 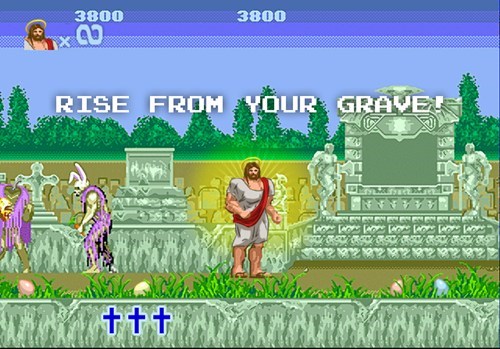 Why is not a thing?!

This is the final song from a game I�ve never played, I promise! But what a song.
I can�t even begin to describe how, well, just how nice this song is. It reminds me of long drives in the countryside during sunset, or sitting in the garden reading while simultaneously dodging birdshit and suicidal squirrels. Good times. It�s simple, clean and oh so good.

This was coming. You knew it, I knew it, everyone knew it. It came.�

Green Hill Zone is the best track in all of the Sonic soundtracks. And that comes down to one word. Nostalgia. That moment when you put Sonic 1 in and start the game proper. The graphics pop up, in all their sexy, 16 bit glory. Sonic moves like a blue streaked lightning bolt, with perfect momentum. And this track plays. One of the most magical moments in gaming right there.
�
Realistically, I would say that Chemical Plant Zone is really the best Sonic track overall. But my nostalgia goggles are firmly blinding me. Also Mega Drive Sonic>Mario. Come at me!

What a contrived and totally expected first spot. Yeah I know. But if it ain�t broke, don�t break it. There�s a reason people cite Streets of Rage 2 as one of the best soundtracks in gaming and that�s because it�s baller ass, sick wicked awesome.
�
Expander is, I guess, the best track because it�s fast paced, with amazing bass, synth, build ups, everything. All condensed into 2:29 of head bopping glory. But Go Straight has that amazing nostalgia value that only first level songs have. And Dreamer is just so awesome as well. And so is Never Return Alive. And Alien Power. And Revenge of Mr X.


So that's my top 10 chiptunes. I think it's a pretty alright list. What do you think?
Leave your vitriol in that space below these words. See ya later dudes!