Well, this is a difficult one. I had planned to post this last week but wanted more time to progress more into it to ensure that I had a good grasp of what the game had to offer� Then the Destiny beta happened. Oh well, I did progress a fair bit so here goes with a mini review of Battle Princess of Arcadias. 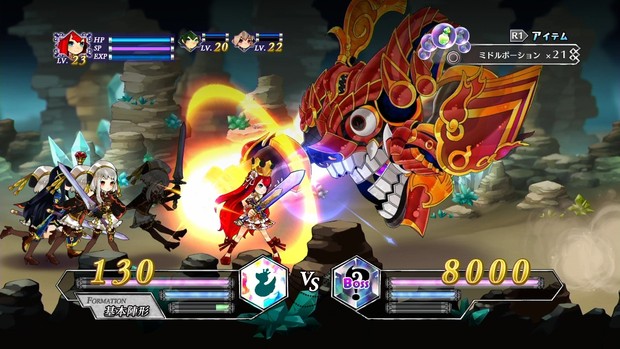 Storywise, it�s a mixed bag. Many of the individual characters act in tropes and stereotypes (they�ve even put in a chuunibyou sufferer in there) which makes for a lot of comic relief yet the story, at least later on, gets rather dark. Oh, and the king of the country is a Duck. Thought I�d throw that out there.

That�s it in terms of game description. From the world map, you pick a stage, which will be one of the three battle types mentioned above and work your way to the end. Characters get experience when you use them and you are able to buy/sell items and weapons from your home base as well as upgrading your troops. There�s also a limited scope for upgrading your weapons using items gathered during battles but aside from a few special skills which can be unlocked on certain weapons, I haven�t really found a use for it yet.

So, how is the game?

Combat Stages! � I really love odin sphere and battle princess lacks the depth of the combat system compared �to odin sphere, it does have a large repertoire of moves to stop things from going stale

Interesting Story � It takes a little while to get going but when talk starts about songs which control people and force them to fight for the entertainment of another species, things start to get interesting. It�s a shame that there are also many comedy stages and ones which don�t really add anything to the plot.

Looks cheap � Going on from the odd animation style, it really makes the game look as though it was made on a tight budget. Seriously, it looks more like a doujin game rather than one with a full release on PSN.

Very repetitive � this is more of a complaint on the siege battles compared to the other 2 modes but there is an element of this in skirmish mode too. Basically, on every siege battle, you employ the exact same tactics: set your army to defend -> run up to enemy -> guard attack ->get a few hits in to lower shield -> block again �-> repeat until shield is down -> all out assault -> when shield returns, go back to defence -> repeat. It�s pretty much the only valid tactic so you�ll use it all the time and these battles can be long�

Grindfest! � This is the biggest complaint I have in this game. Sooner or later (usually when you hit a skirmish stage) you�ll fight enemies with levels might higher than your current ones and you will be slaughtered. So, what do you do? Hit the earlier stages and grind. grind a hell of a lot to raise your level to the point where you can fight on even footing. And that can take a while. Making things harder is that every new character which comes to your team will be severely underpowered so you�ll need to work to level them up before they can be used. It�s possible to just take a handful of characters and raise their levels so high that you won�t need to worry about the others, but either way, a huge amount of grinding will be required� If you don�t like repeating stages over and over again to raise your character levels, stay well away from this game!!!

That�s the tutorial? � This game is awful at explaining the intricacies of the battle modes so you�ll probably find the first few stages really tough until you learn them yourself. The game explains the basic controls but after that, you�re on your own! Normally, I like games which teach you by doing but in this case, the game doesn�t even do that! prepare to flail around randomly until you start picking things up at random.


That�s about it for Battle Princess of Arcadias. It�s a weird one to be sure and it definitely has its faults but it is mostly enjoyable and it does come at a budget price so at least you�re not paying full whack for it. Still, I�d see if it goes down in price first before taking the plunge unless you�re absolutely certain that you want to play it. Might take a while but right now, it�s not quite a game I would recommend but I wouldn�t dissuade anyone from getting it if they wanted to either. The amateur presentation isn�t for everyone either. Overall, It�s just kinda meh!
#CommunityReviews
Login to vote this up!