My game fears: I was afraid to play Ico

3:59 PM on 07.21.2014 (server time)    0
Howdy Dtoiders I've been wanting to write a Cblog for a long while already and i think I've come up with a nice topic to talk about, if i don't get lazy or coward to write ever again i might do a short series about this. I have plenty of cases.

Don't you happen to find a certain stage, aspect or thing when playing a game that makes you stand aside or reluctant to advance? It's very common for me to like Horror games and don't advance farther than the firsts stages and then just watch how my little brother beats it over and over conquering the psychical obstacles that the designers put into it.
I wont talk about horror games though (At least this time) because who doesn't get scared enough not to play them, right?

I first picked up Ico in 2007 a few months after we got our first PS2, the game was gorgeous the mechanics different from what i've played before, it kinda set me the mental image of what the PS2 and its games were going to be.

It was all good and mysterious, i found Yorda. I rescued her and made some of the firsts puzzles thinking "oh this will be nice climbing around with my stick" 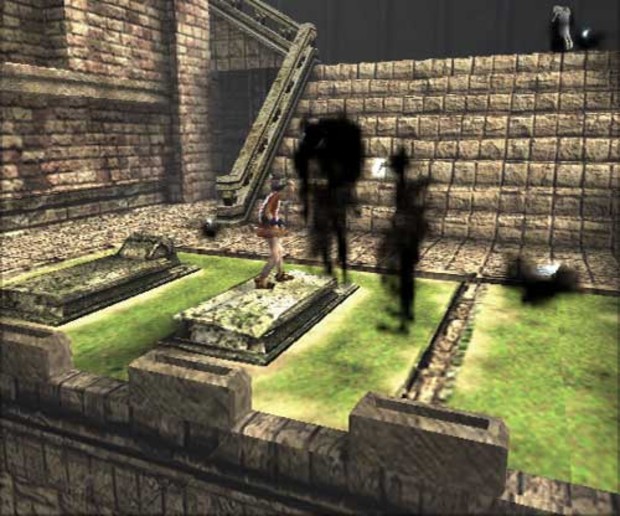 
These wretches appeared from the ground. They wanted to attack me? i suppose they do , of course they want to hurt me- wait no YORDA WHERE ARE YOU TAKING HER.

How i was going to make the two person puzzles if these things kept coming at her to steal her away? the graveyard part it's what made me quit. At that first moment the shadows kept coming at us and i had no idea where i was supposed to go. I killed a dozillion of the shadows and they just kept appearing after us with no rest. And the stress of keeping Yorda safe, not knowing if i was on the wrong side of the map or if had to actually vanish all the shadows first finally caught up on me.

I turned off the console put the disc away and stayed well away from it for 4 years.
At the age of 18 i considered myself brave enough to finally defeat these things and beat the crap out of this game. Turned out that the shadows of the graveyard weren't actually that MANY as i first felt.

The rest? There's not much left to say about how good Ico is, if you're like me and the shadows are keeping you away from advancing don't worry they are not endless!
Login to vote this up!