7:27 AM on 07.16.2014 (server time)    0
The Genesis (or Mega-drive, for us Europeans) is easily one of my favourite consoles of all time, just edging out the PS2 in my esteem. With it's varied library of amazing games, unforgettable experiences and innovation, it definitely deserves it place in video game history.

But mentioning the Genesis without mentioning it's incredible musical accomplishments would be an oversight of biblical proportions. Paving the way for dance/synth music in video games, it gave us classic soundtracks from the likes of Streets of Rage, Revenge of Shinobi and Sonic the Hedgehog that still hold up as some of the best soundtracks available today.

With this blog series, I hope to bring back some attention to the forgotten gems in the Genesis library and rekindle my own love of these classics. The focus is on the music, as that is what I love the most about the Genesis but I'll also go into detail on other things. (Shout out to robertoplankton for the fantastic idea!)

So without further ado, lets start off this weeks entry with a game that is extraordinary in every respect, yet tragically overlooked: Elemental Master 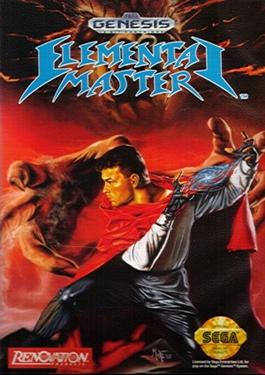 Elemental Master is a top-down shoot-em up released in 1990 in Japan and 1993 in North America. Sadly Europe never got it (damn you Sega!!!) so I only got to play it a few years ago through 'other means'. I'm glad I did though because it is fantastic in every way.

Interestingly, the game does have a story and almost all of it happens in the very beginning! As soon as you start a new game, a pretty good looking cut-scene starts that shows your character, Laden, confronting the antagonist, Gyra. But wait, what's this?! Gyra takes off his mask and reveals himself to be...Roki, Laden's brother! OMG! This all happens at the very beginning, before any gameplay at all and was pretty cool because I can't remember a game, especially a shmup, that would drop such a big story bomb literally 20 seconds in. 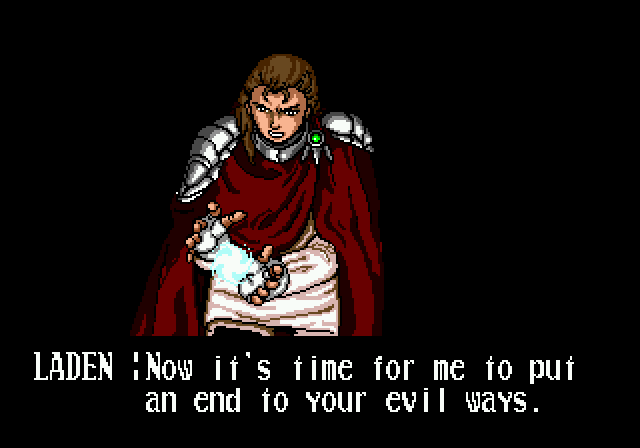 You do that Laden. Enjoy your fratricide as well.

The music that played during this section also sets the tone for the rest of the game perfectly. Upbeat and with a strong techno vibe, if you're not bobbing your head to the beat then you clearly have something wrong with you. I mean seriously, this is super impressive stuff. So much going on and just, ah, I love it. So good!


Great tune. And it's not even the best one.

After the cut-scene, you had the choice to pick from 4 levels, each representing a different element (Fire, Water, Earth and Wind) and which can be tackled in any order, Mega-man style. After these are 3 more levels in linear order then the final boss. Moving onto gameplay, the game set itself apart from the other shmups of it's time by letting you control a character on foot (which leads to the 'running in place' animation looking exceptionally stupid), rather than a ship or vehicle, and allowed you to shoot at the top of the screen but also at the BOTTOM! This meant enemies could come up from behind or flank you and you'd have to turn around to shoot them. And since the screen auto scrolled and enemies would send projectiles every which way from both the top and bottom, the pace was RELENTLESS!

And there were other factors to account for too! Environmental hazards littered the level, like lava streams. So inbetween attacking enemies from the top and bottom, you also had to dodge these hazards. Chaotic doesn't begin to describe it. 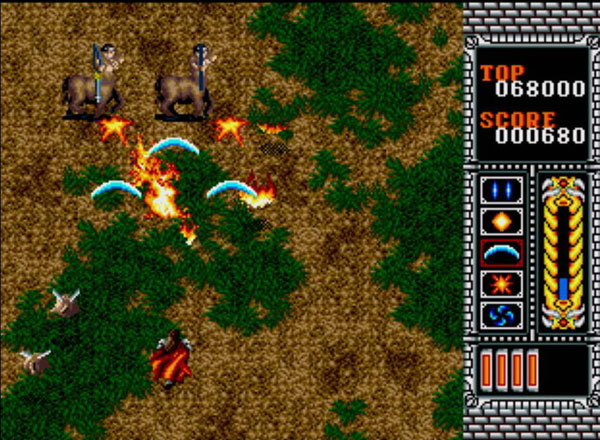 This is a more quiet moment. Savour it as it doesn't last long.

Enemies are fairly standard fodder and aren't really stand outs, though they look very nice. They could use more animation to feel more, well, animated but they're fine. The bosses though completely blew me away with the large amounts of animation that they had and them being multi-sprited only added to their size and presence. The battles really felt fun to fight and dodging and weaving the hail of projectiles was exhilarating. The water boss stands out as a firm favourite, as does the final encounter with Roki. And the ending cut-scene...well, that was seriously good shit, made the entire journey worthwhile!

But despite all this, the game won't tax shmup enthusiasts. Laden has a lot of powers and all are useful everywhere besides a few encounters where you have to use a specific power. And you can charge them up for very powerful attacks. Add to that health increases and pickups everywhere, you get a moderately easy game. I managed to beat the game on my third go and I don't even play shmups!

This boss was the one that killed me the first time. But I got that fucker, got him GOOD!

Finally getting to the best part of this game, the soundtrack. It kicks so much ass you don't even know. This is one of my favourite Mega Drive soundtracks, up there with Streets of Rage 2 and Sonic 2.

Standouts include 'Until the End of the Earth', an amazing, high energy track that just has so much awesome in it that I can't even describe it. By far the best track in the game, which is saying something.

Then there's 'Blood-stained Lake', which hooks you with it's satisfying bass claws and doesn't let you go.

'Fate' is another fun track with some really heavy bass and a super quick tempo.

'Calling on the Dark Dragon King' rocks. I love the distorted sound the Genesis makes here, it just fits so well.

And the song that ends the game, 'Setting Out'. The upbeat, happy vibe is so good after the final boss and the variety in the track with all the build ups just shows that the composer had a lot of fun writing this piece.

These are only some of my favourite tracks from the game. All the tracks are amazing and worth listening too in their own right.

So that's another one done and dusted. I hope reading about a fairly obscure Mega Drive game was at least partially entertaining. If not then I hope the music tickled your fancy!

What do you make of Elemental Master? Sound like something you'd enjoy? What about the music, is it your cup of tea? Till next time nerds, Gaj out!