6:45 PM on 07.13.2014 (server time)    0
So I wanted to do another top 10 list and figured hey. A top ten games list would be nice. I briefly touched upon it in my top ten about me but I want to give details as to WHY they're my top ten. (although most of them will have similar reasons as to why) I'll also be throwing in a song I like a lot from each game. So without further ado let's begin! 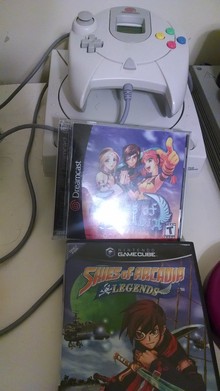 Gamecube not shown due to packing as stated earlier.

Now as to why I like this game? Where to even begin.... the game is a beautiful masterpiece to me. To me this IS the ultimate in RPG games. The story, characters, world, atmosphere, music, and gameplay just flow so well. It is my definition of a perfect game. We all have those, that one perfect game that we cherish above all others.

Anyone that knows me knows I'm a huge fan of One Piece, so Skies of Arcadia is a great game for me because it's a goofy game about pirates. The serious moments are there and can and will hit you in all the right spots but it definitely has a lot of silly light hearted cute moments too. The characters are all amazing I could spend days talking about them but I won't.

The one weird thing for me is I'm dreadfully afraid of heights. And Skies of Arcadia is a game about Air Pirates. So you'd think I'd be a little scared right? Nope. While I am scared shitless over some of the things the game has you do, I also really like this worlds ship design for Air Ships. Each one (aside from stock ships) is unique and different in each way, they even have it so you have Air Ship battles along with the normal you versus enemy encounter. Plus this. This attack?

FIRE THE MOONSTONE CANNON ON EVERYONE!

It wrecks so much shit. But that being said they make it fair. You have to earn it, by choosing the right way to fly your ship and have it charged up enough.

Then theirs the world. Another thing from earlier remember how I said I loved enjoying a game that felt like the creators liked making it? Welcome to Skies of Arcadia Legends folks! Where they have things called discoveries that give you more backstory about the world that you can then in turn sell for money. Pretty cool right?

Then there's the story, I love the story, it's an amazing one and I won't say anymore about it for fear of ruining it. This game. This game is my jam. I have played it 8 times, 100% it once (it takes a while to do it) and I'm going to keep playing it once a year probably 100% it every other year. 100% is a good idea as well, you get access to one more super-boss afterwards and the best weapon in the game. But enough gushing. (Unless you want me to gush more. Just ask in comments and I will)

I hope you enjoyed my top ten games of all time post. I know some of the reasons overlapped but what can I say? I have a specific like when I play my games. What's everyone's at Destructoid's Favorite game? I'm curious and wanna learn more about all ya'l.
#PersonalBlog
Login to vote this up!