7:53 AM on 07.05.2014 (server time)    0
The Genesis (or Mega-drive, for us Europeans) is easily one of my favourite consoles of all time, just edging out the PS2 in my esteem. With it's varied library of amazing games, unforgettable experiences and innovation, it definitely deserves it place in video game history.

But mentioning the Genesis without mentioning it's incredible musical accomplishments would be an oversight of biblical proportions. Paving the way for dance/synth music in video games, it gave us classic soundtracks from the likes of Streets of Rage and Sonic that still hold up as some of the best soundtracks available today.

The point of this blog series is to appreciate and, hopefully, discover new music that we can all listen to and enjoy. I will critique aspects here and there but mostly it's about the appreciation. Or lack of, if you don't like it, which is fair enough. You weirdo.

So without further ado, lets get started with a soundtrack that I've fallen in love with all over again...Altered Beast. 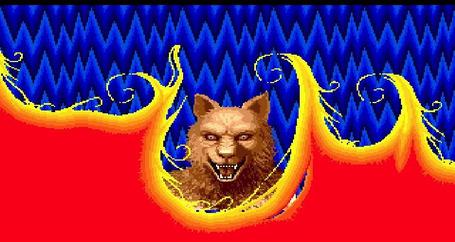 This was so metal back in the day. Still is. What's more impressive that a werewolf on fire?!

Altered Beast was originally released as a pack in game back in 1988 and received a good reception, with praise aimed at it's graphics and particularly it's use of parallax scrolling. You played as a Roman Centurion who is resurrected by Zeus to save his daughter Athena from the evil god of the underworld, Neff. Besides idiotically confusing Roman and Greek mythology (though who doesn't) it's also a side scrolling beat em up in which you can transform into a wolf and kick lots of mythological ass by kicking shit.

Unfortunately it's aged rather poorly. Playing it today, the graphics are not especially impressive, though the death animations of enemies are still amusing. What has aged really poorly is the rock hard (dare I say...cheap?) difficulty. So not really a game to recommend playing in the 21st century.

It's soundtrack though, I can wholly and unconditionally recommend.

"Ryse fwom yuor Grawe". Those 4 words inspire so much nostalgia and hatred, it's unreal. Every single time you died, which my 8 year old did A HELLA LOT, you'd hear Zeus utter those dreaded words. It grated so much back then. But now, it's strangely nostalgia. Iconic even, of a bygone era when games actually had difficulty.

Talking about the track, this is very much the best track in the game. It starts of regal and foreboding, as you take your first steps in the game the synth trumpets sound to herald the beginning of your quest to rescue the fair damsel. The beat in the background just adds to this whole feel of conquest and adventure. It's one of my favourite tracks to begin a game with and it sets the tone of the so perfectly. This is ancient Rome, you are a warrior, a goddess is in danger and only YOU can save her. Perfect.

Then, when you collect enough power-ups, you quite literally go into BEAST MODE and turn into a fricking werewolf. The track changes as well and the eponymous "Altered Beast" track takes over. This track is probably my second favourite in the whole game. The thumps in the background just raise my blood pressure to dangerously high levels (for me anyway. I'm not very active.) and the overlay just propels me onward to dash attack or fire blast everything in my way (because apparently in the Altered Beast universe, werewolves have the power to perform Haodukens. I can dig it).

Sending a Haoduken straight into Satan's dick? How metal can this game get?!

The rest of the soundtrack carries on the general theme of the game. Gaum-Hermer is a bassy number that instils a feel of dread as you explore, Closed in Upon me does this as well with it's strong, forceful beats and downtuned overall feel that makes you feel like you're going through a slog as you desperately try to get to and destroy Satan, erm, Neff. Special mention must be given to I'll Be Back as it just is so good as destroying your will. The ultra low beats juxtapose with the high, thin synth to almost feel like a cry of pain and the succession of 4 quick taps never fail to back this feeling up. This plays on the last level before the boss fight and is literally perfect.


And then this thing plays. WHERE'S THE CONSISTENCY?!!!

Now this track just baffles me. I mean, it's a great ending track and is well made, produced, etc. But it just doesn't fit here at all. I just turned into a werewolf, pummelled a thousand enemies by kicking them in the face and haodukened Neff's dick into oblivion. And I get this far too chipper tune as reward? I would have preferred something a little more gloomy, more mysterious but with a tinge of glorious victory. Just my two pennies.

But anyway, it doesn't diminish from an extraordinary soundtrack that captures the feeling of battle and adversity. For a pack in game, it's rather quite impressive.

[hr]
Well folks, that wraps that up. I hope this has been a somewhat pleasant read and I plan on doing more of these, should time allow. Perhaps as a fortnightly thing sounds about right. Tell me in the comments about your thoughts on the music! Does it capture that spirit of adventure for you as it did me? Do you love Genesis music in general as much as I do? (Clue: You don't, it's impossible).

Also I will be providing download links for this album and future albums from a website I 100% trust and completely recommend. They are doing God's work there and I hope you won't mind me supporting them a little. I'm not a spam/troll/plug account, I promise!