OK, I have to confess that I never thought this would get a western release and was a little adamant about buying it but decent word of mouth and general curiosity won me over� So let�s take a look at monster monpiece for the PS Vita 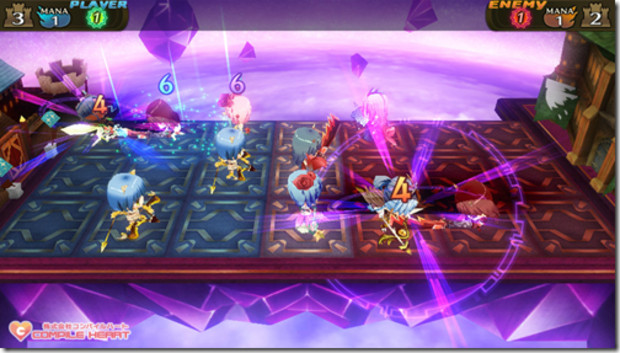 There are 4 different types of cards, melee units (who attack adjacent cards for high damage), ranged units (who do less damage but can hit from further away), healers and buffers (who strengthen the ally card it�s next to). Cards have varying stats and some have special abilities, such as being able to move forward as soon as they are summoned, and more powerful skills which can affect areas of the board. Monsters are summoned using mana, which is generated at a variable rate but by default, is 3 mana per turn. You can increase the amount you get by summoning special cards or by utilizing a special chain feature in the game. Each card is given one of four colours. If you summon 3 monsters in succession, each corresponding summon will net you a small bonus which includes stat buffs for your cards on the field and additional mana. Still with me so far? Like all other card games, it looks complicated when you read the rules but is actually very simple when you just play it.

Monster cards can also be upgraded by paying a certain amount of points (obtained by winning battles) and then playing a minigame where you rub the artwork on the card and find a weakpoint to exploit. You�ll end up rubbing, poking and pinching your card to raise a bar and, if you fill it, you�ll upgrade the card to its next form. And if you do it well enough, you might also get the extreme rub mode where you rub the front and back touchpads to fill the bar up extra quickly, all the while being �serenaded� by the voice of the monster sounding aroused. Unsurprisingly, this is what most western publications has latched onto as being inappropriate and started waving the sexism banners and generally saying they�re outraged. Personally, I don�t care. Call me insensitive but I�m just tired of everyone trying to point out that everything is sexist. It�s good to raise awareness of problems within the male dominated games industry but now, it�s just turning into noise. I have a different problem with it, which I�ll get into later.

The game itself is wrapped around a simple but serviceable story involving a quest to save your friend from some evil power which has possessed her. A staple story from old school RPGs. It�s not going to win awards but it does the job and the characters are likeable enough to encourage you to keep going.

That�s about it for the info. How did it play?

Very deep battle system � when you start playing the game, it does feel very simple, especially when your initial cards are lacking in any special abilities but when you start getting other cards with skills and whatnot, you can really start messing around with strategies and turn situations around in the blink of an eye!
don�t always upgrade � The traditional wisdom is that when you upgrade something, the result (if successful) is generally better. Maybe there�s a tradeoff where they�re harder to use or summon in card games like this but there�s not really a reason to not upgrade if possible. That�s not the case in monster monpiece. Some cards may actually get weaker when you upgrade but they try to offset it by something else. One example is one of my ranged cards losing attack power and HP in exchange for longer range. You actually need to think about whether or not you want to upgrade your card!
Neptune is in it!! � Initially a pre-order bonus in Japan, Neptune from Hyperdimension Neptunia is in the game as a summon card! Rubbing her changes her to black heart and you can do the same again to change her back. It�s a minor thing but it�s really cool to see her in this game. Kinda makes you hope that the other goddesses might join her at a later date as DLC.

Destined to lose � This is a card game remember so ultimately, there is a huge element of luck involved and you will almost certainly find yourself in situations where the heart of the cards abandons you and find yourself in an unwinnable situation through no fault of your own�
The Rub system � Yep, I don�t like it but not because of the whole sexism thing but rather because it detracts from the game itself. It�s an unnecessary distraction which feels like it was placed in purely because they wanted a gimmick which they could market. The main game itself is solid but doesn�t grab peoples attention as much as the rub system�
Awkward deck building � One of my pet bugbears about the game is that it makes it difficult to see various cards when you want to upgrade or build a new deck. The game separates cards which are in a deck from ones in your stockpile and once you upgrade a card to its max level, it can no longer be seen in the upgrade screen so you can�t use it for future reference unless you go to a separate menu. It just adds frustration and gets in the way.
No Auto-save feature � I can�t believe that they didn�t put this in the game! You need to manually save the game in order to continue your progress if you close the game down. Even though there are chapters in the game story and clear points where it could be easily implemented, the game tells you straight up that you need to save the game yourself. And that includes after you�ve edited your deck as well! Now this wouldn�t be a major issue if it wasn�t for the next bit�
BUGGY AS FUCK!!! � I can�t believe that this game was released with as many bugs as it has! Most are centered around the card packs (how you get additional cards) and the rub system. At times, the game will just simply freeze and the only way to progress is to restart the game. Now, imagine �that you�ve progressed a fair bit in the story and upgraded a fair few cards when this bug freezes your game. Did you manually save recently? No?? Well, tough shit!! I�ve had to repeat a fair amount of rubbing and battling to progress purely because the bugs in this game appear at the most inopportune moments and force me to restart the system. well screw you too!! There�s also some bugs present in the online multiplayer. I�ve only played a few games but I�ve lost entire turns at random because the timer for my turn just bugged out. I�m given 30 seconds to make a move, I immediately pick up a card and then the game suddenly says pass for some reason despite me not pressing the button to pass my turn� Hopefully, that problem doesn�t arise in ad-hoc mode.


Overall, I have to admit that I have enjoyed the game far more than I expected and the card battle system is really quite deep and fun. If you can ignore the problems presented with the distracting rub system, it�s really quite fun. Having said that, I cannot recommend the game to anyone until the publisher patches out the damn bugs!! What makes it worse is that, apparently, only Europe is affected so this might take a while and believe me, you don�t want to have to save everytime before you upgrade a card�
Login to vote this up!