The Cat Lady is a graphic adventure game with supernatural and horror themes. The basic gameplay is simple; explore, solve puzzles, talk to characters with a choice of dialogue options. It has a very grim atmosphere and deals with subject matter such as depression, death, and loneliness.

You play as Susan Ashworth, a 40-something woman who is alone, except for some cats, for which she has some natural affinity for, depressed and at the beginning of the game has just overdosed on prescription sleeping pills. However, she appears in a strange field where she encounters her own corpse, a deer, and a cabin where she meets The Queen Of Maggots. The Queen explains to Susan that she won't allow Susan to die until she has got rid of 5 evil people (“parasites”, she calls them) from the living world, or else suffer for eternity, unable find peace. The Queen convinces Susan to comply (she doesn't really have much choice), makes her immortal, and sends her back to the real world to carry out the task. 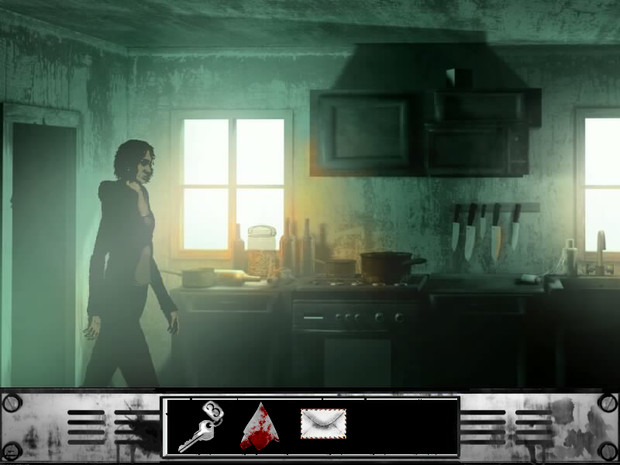 The Cat Lady's audio-visual style is where it earns most of its plus points. It has a very distinctive art style; everything is drawn to look like a graphic novel of sorts and character models are 2-D and move in jerky, inarticulate motions as they would if they were made of paper. The colour palette is mainly shades of grey and black punctuated by sharply contrasting shades of white and lots of red (usually blood, of course), along with the tastefully minimal use of other colours such as sickly greens and orange/yellow hues from light sources, which all blend nicely together with the impressively detailed background scenery. Overall, the graphics and art are probably my favourite elements of the game, as they are suited perfectly to its grisly, macabre theme.

The music is similarly atmospheric. A combination of bleak acoustic guitar/piano tracks, occasional heavy-rock beats along with dramatic strings and minimalistic electronica sounds make for a pleasing audio style in The Cat Lady.

Overall, what could have been a decent puzzle-adventure game that explores mature themes is spoilt by a haphazard story, poor acting and writing.

-Overall Score-
4/10
#CommunityReviews
Login to vote this up!