8:55 PM on 06.06.2014 (server time)    0
[I'm pretty spent after a day of being down, but I've been playing the crap out of Warframe, it's good stuff. Anyway, with the not-so-stunning revelation that SE won't be bringing their heavy hitters; Kingdom Hearts 3 and Final Fantasy XV to E3 this year - Christ that's a lot of numbers - I figured I'd write up a quick blog on my thoughts about the company that rarely approach a situation with grace and dignity. Hold your mind buns wide open and let your brain-orifices relax, I'll be gentle.]

For those of you not keeping up to date on, well, dates; this is 2014. If you've heard anything about the development of a certain Final Fantasy game in it's fifteenth iteration, you'll know that it was rebranded from Vs.XIII and has been in development hell since the announcement in in or around 2006. Eight years, and other than some 'new' trailers and some very minor gameplay footage, nothing has really come to light about what this game is, what it's about, or why people should care at this point. Kingdom Hearts 3, the long, long awaited sequel to the 2005 predecessor, is having a lot worse treatment. Teased at last years E3, the internet was ablaze with ecstatic fans - who SE then cut down by remarking that it was early in the development process. Fan estimates put the game in the 2017 release bracket...but apathy started to seep in. 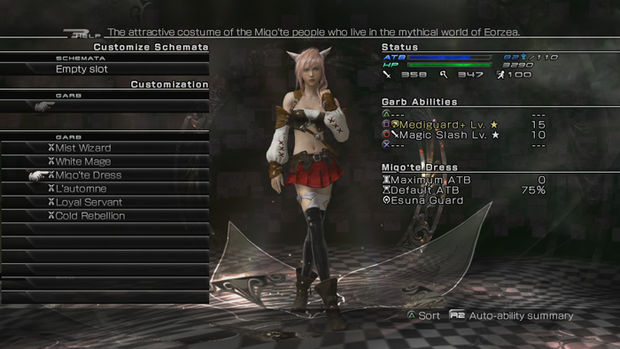 Let's face some facts here; Bravely Default was like a cold, hard dick-slap in the face of every SE executive, because people actually enjoyed it. Some would argue that it isn't a fantastic JRPG...well, once again, an application of critical thinking is necessary to understand why people loved it so. When was the last time that a company synonymous with JRPGs actually put out a traditional JRPG in those eight years? The World Ends With You was the closest thing the consumer got, and that was insanely hard to find. Being starved for a particular genre of entertainment only makes that genre more popular when it finally makes a return.

This sort of game was deemed 'dead' by SE. Why? Paranoia? Stupidity? Who knows!

In those two instances, what exactly made all the difference? It was the attitude of the audience. Of course, SE executives were amazed at Bravely Default's success, planning, once again, to continue the trend they had long since abandoned for no reason. How does this apply, then, to Kingdom Hearts 3 and Final Fantasy XV's resounding lack of fan outrage? Well, apathy is a strong thing, and it's also a sword that cuts both ways. On the one hand, in the case of Bravely Default; the apathy the audience had for the companies rebranded concept of JRPGs meant that a return was met with a resurgent sense of hope and joy. In the case of the E3 announcement, however? It simply means that people are beginning to get wise to the way SE do business and, as a result, are starting to lose interest entirely - in many ways like Valve's Half-Life 3 situation. People only care so long as they aren't getting jerked about, but in this case? There's been a considerable amount of neglect thrown in the collective faces of the fanbase, and that neglect is making them disinterested. Sure, putting Final Fantasy III on Steam was a great idea, remaster it and sate their hunger, but all you're really doing in that case is reminding people of what your games used to be, versus what they are now. It's unintentional negative reinforcement, and while I've had my issues with the company over the last eight years, many of the more forgiving fans are starting to lose interest in the broken promises from a company that spends more time making expensive, limited game engines and announcing games, than they do actually making them.

So there's the conundrum; how long do you put up with unnecessary neglect and confusing actions before you pack up shop and move on to pastures new? Has Square Enix really given fans the attention they deserve? Or have the recent developments with Bravely Default and the outright stunning apathy surrounding the lack of Final Fantasy XV and Kingdom Hearts 3 information shown that times are indeed changing, and that the most beloved JRPG creators of the industry are losing touch with their audience? One could argue that XIV's success says otherwise, but let's not forget the outright shambles that game existed in before it's two-million dollar revamp. Missteps on this scale throughout an eight year period have consequences, and whether or not you agree, you've got to admit; nobody really expects Square Enix to show anything at TGS that is in any way significant. Sure we can all live in hope, but the doubt eating away at the back of your mind? That's the effect of eight years of terrible decision making by a company who has more money than sense.

Really, if you want to play a great JRPG from the previous generation, play Lost Odyssey. I love that game more than I can ever say, and it deserves to be praised for how it put every FF game this generation to shame.
#General-Opinion/Editorial
Login to vote this up!