E3 Prediction: Pokemon Delta Emerald is an Actual Thing (on the Wii U)

8:28 PM on 06.05.2014 (server time)    0
Over the last decade, the developers at GameFreak have remade its older Pokemon games in-between its newer releases.  With significant improvements over their original incarnations and channeling the unstoppable power of nostalgia, the Pokemon game remakes have continued to win the hearts and minds of fans both new and old alike, with said games being among the highest-selling titles for each gaming system that houses them.  However, many of these older Pokemon games often have a third version release: an updated version that houses enough new features and a shuffled Pokemon roster to warrant a separate release.  While the Pokemon remakes have been of the original two games of any particular generation (Heart Gold & Soul Silver being remakes of the original Gold & Silver, for example), versions like Pokemon Yellow or Pokemon Crystal have not been given the same treatment; rather, elements introduced in these versions were incorporated into the remakes of their predecessors (the Suicune subquest from Crystal being integrated into Heart Gold & Soul Silver immediately comes to mind).

A single trademark registration changed, however, challenged this trend.

A week or so ago as of this writing, internet sleuths discovered that Nintendo had recently trademarked Pokemon Delta Emerald.  For much of the general gaming public, something like this went relatively unnoticed.  Even the webmaster of Serebii.net (one of THE most popular Pokemon fansites on the interwebs) stated that the trademark registration "is not likely to be indicative of a game release, but rather covering bases."  And while many of our fellow D-toiders were quick to call out the potential cash grab of a third game alongside the recently-announced Omega Ruby and Alpha Sapphire remakes (and rightfully so), it wasn't immediately evident that Nintendo was planning on bucking the past trend of remaking *only* the original iterations of any particular pair of games any time soon.

At least, that's what I thought.

Back when Pokemon Fire Red and Leaf Green were being released, "Pokemon Water Blue" was actually trademarked by Nintendo despite such a game never seeing the light of day.  Given the obvious connection between the original Red and Blue and the thematic naming elements for the remakes, it was pretty obvious that Nintendo's choice to trademark "Pokemon Water Blue" was to keep it out of the hands of would-be bootleggers, giving the Big N the absolute legal right to pursue anyone who tries to publish such a game, black market or otherwise.  So when "Pokemon Delta Emerald's" trademark made the news, I initially thought Nintendo was just repeating what it did years ago.

In any case, with the announcement of Omega Ruby and Alpha Sapphire being direct remakes of the original Ruby and Sapphire, the trademark registration of Delta Emerald kept on a low profile was all the more interesting, especially given the fact that E3 was less than a month away and that Omega Ruby/Alpha Sapphire's announcement was made THE very same day that Nintendo published its third year of operating loss in a row, obviously to soften the blow and keep people distracted from the news of Nintendo's dwindling profits.  Even more interesting is the nature of the original Pokemon Emerald version and its relation to Ruby and Sapphire, and what it means if such a remake was released today. 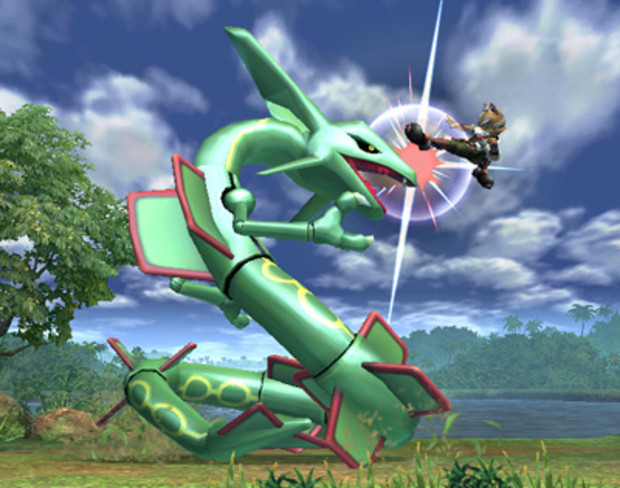 Meanwhile, Fox reminds Rayquaza that Star Fox really needs a comeback on the Wii U...


Of course, all of this speculating is just that: speculation.  If I'm wrong, then I'm wrong - I'm taking this with as much a grain of salt as you should be taking after reading this, along with any sordid rumors you'll likely read from now until E3.

That being said, I think I might be onto something, and I thought I'd share it with you guys.  In any case, thanks for taking the time to read this!

~ Ghalheart
Login to vote this up!

I enjoy many different games and franchises but, above all, I love talking about the PokĂ©mon series the most - so much that I started my own website after making a few blog posts here!