12:23 PM on 05.15.2014 (server time)    0
Castlevania: Lords of Shadow 2 is the final chapter in the quasi-trilogy of the Lords of Shadow games. In this entry you play as Dracula himself. Much like the other games in the series, it is flawed, but is overall a satisfying experience despite its problems. In many ways it is actually the best of the three.

The game starts off with a brief recap of the story of the two previous games, which it rushes through with little detail, as if to assume the player is already familiar with the story it is telling. This is the beginning of the biggest problem with the game. The story is a mess. It feels rushed and shallow, full of many characters who do not get explored in much depth, and many plot points and concepts that aren't explained well at all. Although some of these unanswered questions can be worked out with a little thought, none really have a clear answer. Many leave glaring holes in the plot. Although there actually are some moments between characters that are well executed, they are fleeting and few, and only leave you with the feeling that they missed their potential drastically. The ending is also particularly underwhelming, as it completely disregards one of the two most important plot points of the entire game with no explanation at all.

The opening gameplay also sets a trend for the rest of the game, but a much more positive one. It begins with an impressive battle scene of a large army laying siege to Dracula's castle. As you fight through enemies and climb atop the enormous mechanical Titan that is aiding the army, it is immediately clear how much of an improvement in gameplay it is over its predecessors. 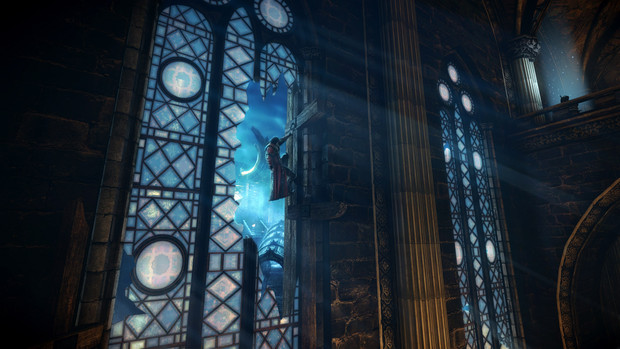 And speaking of architecture, that is part of another highlight of the game. It has a fantastic aesthetic. It has a wonderful art direction, full of dark and dramatic vistas full of intricate looming Gothic towers. Character design is also impressive, following the same style. Although sometimes shadows on them can look a little ugly, and some of the enemy character models can look a bit low-detail if you look at them closely. Getting that close rarely happens in actual gameplay though, so it's easily ignored for the most part, and doesn't diminish the overall aesthetic of the game. Some areas in the modern portions of the game are a little less impressive, since they sometimes feature a rather dingy industrial setting. The castle areas though, are unbridled Gothic goodness, well complimented with many varied styles. Like a snowy, windswept mountainside, or a colourful and intricate wooden puppet theatre, or a vast fiery cavern full of lava and towering metal machinery connected with gigantic chains.

The soundtrack is also a great part of the art direction of the game. It keeps a similar theme to the previous Lords of Shadow games, but has a slightly more balanced quality, for better or worse. While the best tracks from the predecessors were mostly found in the more calm, non-combat sections, here stand-out tracks can be found in both combat and non-combat sections. But at its best, it still has a wonderful, stirring, and swelling feel to it, which retains its unique personality too. It really adds a lot to the atmosphere and tone of the game, and perfectly compliments the visuals.

So while this game can't really hope to compete with the greatest in the action genre, and has some huge narrative flaws, it still has a lot going for it. For what it's trying to do, the combat is thoroughly engaging, and with a very admirable art direction, it draws you in to its world very effectively.
#CommunityReviews
Login to vote this up!