The Day I Got Real Fired from my Pretend Job: A Confessional Tell-All (Part I)

9:28 PM on 05.06.2014 (server time)    0
Disclaimer: This series of blog posts that I will be releasing once a day for probably a week or so is in no way meant to slander Destructoid or the awesome editors who work for it. It is more written in the interest of revealing the inner workings of the Destructoid site, and my personal reflections on writing for Destructoid.com. The last two posts of this series will focus on the greatest moments of my Destructoid 'career' and then the lowest moments respectively. For the second one, I probably won't use names and will certainly not be talking about anyone currently employed by the site.

Also, as an aside, I never signed anything saying I wouldn't talk about my experience with the site. ;p

Also also: All images drawn by finger on iPad app, Paper.
�
�
In life, I tend to work best as a jack of many trades. I�ve worked as a laborer on� family-owned apartments down in Southern California, as a restaurant server, as a camp counselor, as a caterer, as a freelance writer of short stories, as a trainer to new job hires, and now my next career-oriented goal is to become a teacher.
�
Throughout all of these different job opportunities, one thing has been consistent � the fact that I am obsessed with the video game industry. It goes so far back that I was once a nerdy little boy who coded my own complex game ideas in the shittiest of all programming codes, QBasic. 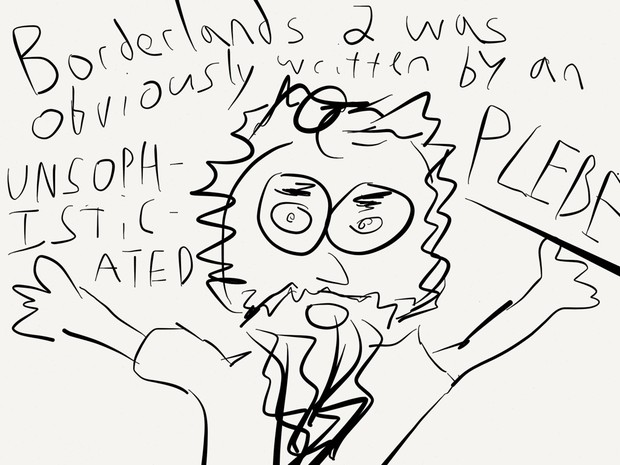 So naturally, when the site made a call for interns, I jumped at the chance. I shot an e-mail to Niero on the off-chance that he might consider me to write for the site. I was surprised to get a response back rather quickly, asking if I�d be cool with meeting up in a coffee shop in the Mission.

Stay Tuned for Part II: The 'Hiring' Process, coming in tomorrow.
Login to vote this up!